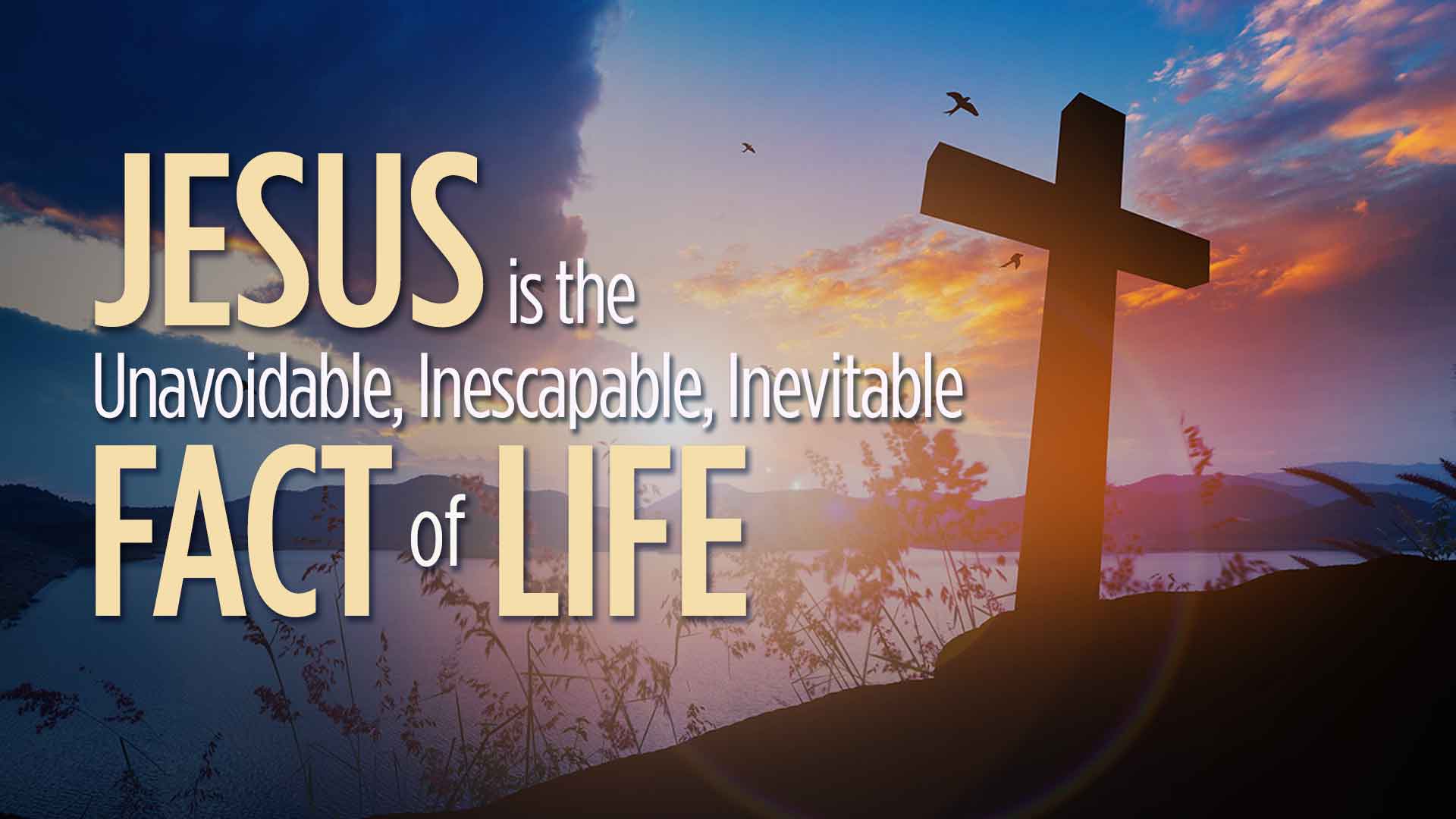 Jesus is the Unavoidable, Inescapable, Inevitable Fact of Life

From the beginning of Genesis to the end of Revelation, Jesus stands at the crossroads for every person who has ever lived or ever will live. He is the central character of the Bible—Old Testament and New Testament—and the One who presents humankind with an unavoidable decision.

Even those who never read God’s Word understand Jesus as a central figure. He has been written about, sung about, depicted in art, debated, and discussed more than any other person in recorded history—which, by the way, is divided by Him (BC, Before Christ/AD, Anno Domini or “In the Year of the Lord”).

Every person must decide independently: Jesus is either Lord of lords, the one true God worthy of worship and allegiance, or He is someone less.

It is a stark choice with eternal consequences. This month at Love Worth Finding, we are exploring this choice by looking at:

Finally, we’ll look directly at His Word and explore what Jesus has to say to you as He stands at the crossroads and asks you to make that unavoidable decision for your own life.

Your soul is of inestimable value.

Your soul is more valuable than anything you can imagine. Why? Your soul was created by God, is a unique, one-of-a-kind occurrence in all the Universe for all of time and beyond, represents your potential to be like the Heavenly Father’s beloved Son, Jesus Christ, is precious enough for Jesus to die for, and will exist for all eternity!

Therefore, the loss of your soul would be immeasurable, irreplaceable, and irreversible. Such loss would also be inexcusable because Jesus Himself, the living God, died to redeem your soul.

Pastor Adrian Rogers told this story to help you understand why you must carefully consider the value of your soul:

“Suppose there’s a boy who falls in love with a girl, but he doesn’t really know how to ask her to marry him. So, he thinks if he just gives her an engagement ring, she’ll catch the idea. He has it beautifully wrapped, and inside the wrapping is that velvet box with the satin lining on the inside and a gorgeous ring. He gives it to her and says, ‘Look at this and tell me what you think.’ He comes back and says, ‘What did you think about my present?’ She says, ‘It’s beautiful. I love it.’ And she pulls out the little box. She says, ‘Look at the hinge. See the little clasp. See how fuzzy it is. And look how soft it is on the inside. Look at that satin.’ He says, ‘Yes, but what about what was on the inside?’ She says, ‘You mean that piece of wire and glass? I threw that away, but this is a wonderful box. Thank you so much for it.’

“It sounds funny, but there are people who are just like that. They don’t understand that the body is the box; the soul is the diamond. We pamper the box, and we neglect the diamond that is on the inside. Jesus told us it is a pitiful and bad bargain for a man to try to exchange his soul even for everything in the world.”

The Final Judgment is Real

The loss of the human soul is irreversible; those who don’t know Christ Jesus will find that out at the Final Judgment, also called the Great White Throne Judgment, prophesied in the Book of Revelation. This judgment of the lost will be presided over by Jesus Himself. Those who will be condemned include sinners who hate God and reject His Son, self-righteous people who believe their good works can save them apart from Christ, procrastinators who choose against Christ by failing to choose to accept Him, and “church members” who gave lip service to Christianity or followed Christian rituals but did not accept Jesus as Lord and Savior.

Lost sinners will have all their dirty secrets on display at this final judgment; nothing will be hidden. Evidence will be presented, defenses will be made, and the verdict will be handed down as follows: “Then Death and Hades were cast into the lake of fire. This is the second death. And anyone not found written in the Book of Life was cast into the lake of fire” (Revelation 20:14-15). The Book of Life contains only the names of the redeemed—those who came under Jesus’ protection by accept Him as Lord and Savior in this life.

But even those whose names are not in the Book of Life will go into eternity in Hell with Satan knowing that they made the wrong choice. Philippians 2:10-11 says, “at the name of Jesus every knee should bow, of those in heaven, and of those on earth, and of those under the earth, and that every tongue should confess that Jesus Christ is Lord, to the glory of God the Father.”

For more about the Final Judgment, read the article, “The Decision Is Yours: Facing The Day of Judgment.”

Your Decision is Urgent

To help us understand the urgency of our unavoidable decision to accept or reject Jesus Christ as Savior and Lord, Pastor Rogers preached a message comparing the Days of Noah with current times. We must not make the same mistake as the people of Noah’s day who considered the warnings of God’s judgment foolishness and failed to get in the ark. We too have an Ark into which we can go for salvation from judgment—the Person of Jesus Christ. God’s Holy Spirit beckons us to come into the Ark of God’s grace.

Pastor Rogers told us Noah’s days, like ours, were marked by secular philosophy, scientific progress, social plagues (including great violence, disrespect for the value of life, and the unraveling of the family), sexual perversion, selfish prosperity, solemn preaching about the coming of God’s wrath, and sudden panic when judgment arrived.

Sound familiar? Could we be walking along the shores of eternity with our eyes closed, failing to sense the coming tsunami of God’s judgment.

“Folks, I don’t know how that day began. Maybe that day was bright and fair. Maybe the clouds began to gather. I don’t know what happened, but I know that it came suddenly, it came cataclysmically. Perhaps the wind picked up and began to moan like a funeral dirge across the earth. And then, God said to Noah, ‘Noah, come, come thou and thy family into the ark.’ And God brought Noah into the ark and God shut the door. God shut Noah in, and God shut others out, and God shut the water out.

Suddenly the earth rocked, the heavens opened, and the slough gates of heaven began to pour great floods of water. And water belched out of the earth and the water began to rise. And those who’d been laughing at Noah and those who’d been mocking Noah now began to wonder, ‘What is this? Those in the valleys began to run to the high places. Those in the high places sought even higher places. After a while, when the water got up to dangerous proportions, they began to beat upon the door of the ark and say, “Noah, let us in,” but it was too late. God had shut the door. And God shut the water out and God shut these people out who laughed and mocked and scoffed. And God shut His people in.”

For more about the days of Noah and the similarities to our day, read the article “The Unexpected Days of Noah.”

Jesus told a story recorded in the Book of Luke that we all need to heed. He used what were likely real people—an unnamed rich man and a believer named Lazarus (not the brother of Mary and Martha)—to contrast the rewards of fellowship with Him verses the consequences of rejecting Him.

At death, each was transported immediately to an eternal home—the poor man reclining at table, comfortable in the “bosom of Abraham” and enjoying eternal fellowship with God, and the rich man living an eternal life of physical, emotional, and spiritual misery.

Eternal existence is a reality for every human being. There are those who like to speculate that this life is all there is, Pastor Rogers said, but the Bible says otherwise.

“Death runs in my family, and it does in yours,” Pastor Rogers said. But so does eternity! “God breathed into my nostrils the breath of life. I became a living soul. I could no more cease to exist than God Himself could cease to exist. There’s something different about man than animals. Man has a spirit, and that spirit will go on—endless, timeless, dateless, measureless—on and on and on and on.”

While it is pleasant to imagine the joy Lazarus experiences in Heaven in this story from Luke, Pastor Rogers suggested Jesus told the story to reinforce the truth that Hell—with a capital “H” as a proper noun—is a real place, and the irrevocable eternal residence of choice for those who do not know God.

“I believe in Hell because Jesus taught it. And I believe in Hell because the death of Jesus demonstrates it. Be reasonable with me. If there is no Hell from which people need to be saved, why did Jesus die? Did Jesus die upon that cross to save you from a non-existent destiny? Listen! Listen! By every bruise laid upon His face, by every foul mouthful spat into the face of the Lord Jesus Christ, by every hair of His beard that was plucked from His cheeks, by every agonizing point of the thorns upon His head, by every lash that was laid upon His back, by every drop of blood that fell to the ground, by the heartache and the agony and the utter midnight of dark Calvary, I declare to you there is a Hell.

For more about the story of the rich man and Lazarus read the article, “Your Life after Death: The First Five Minutes After You Die.”

What will you do with Jesus?

No greater question could be asked of any person.

Jesus stands before you today—at the crossroads of your mind—just as he stood before Pontius Pilate in Matthew 27. Pilate asked: “What shall I do then with Jesus who is called Christ?” Pilate let the crowd decide for him when they shouted, "Release Barabbas!”

What are some of the things the crowd says about Jesus today?

And what does Jesus say about Himself? He stands at the crossroads of your decision and says to you:

This is the Messiah’s invitation to you: “Most assuredly, I say to you, he who hears My word and believes in Him who sent Me has everlasting life, and shall not come into judgment, but has passed from death into life” (John 5:24).

If you want to be a child of God and know that you have passed from death to life, pray something like this:

“Jesus, I know you created my soul as something of great value. I have fallen short. I am a sinner. But as the Son of God, you made the ultimate sacrifice on the cross because you want to be with me forever. I want to be with you too! I believe you died to give me life and that you were raised from the dead. Forgive my sin; cancel the judgment that is against me. I turn from disobedience and bow to you as my Lord. I want to become more and more like you each day. Thank you for saving me eternally.”

If you made a decision to follow Jesus Christ, please LET US KNOW so that we can help you get started in the Christian life.

Your Life After Death: The First Five Minutes After You Die

The Unexpected Days of Noah

The Decision is Yours: Facing the Day of Judgement

You Can’t Measure the Value of the Human Soul

What does the inevitability of Jesus mean?

Why did Jesus decide to die for mankind?