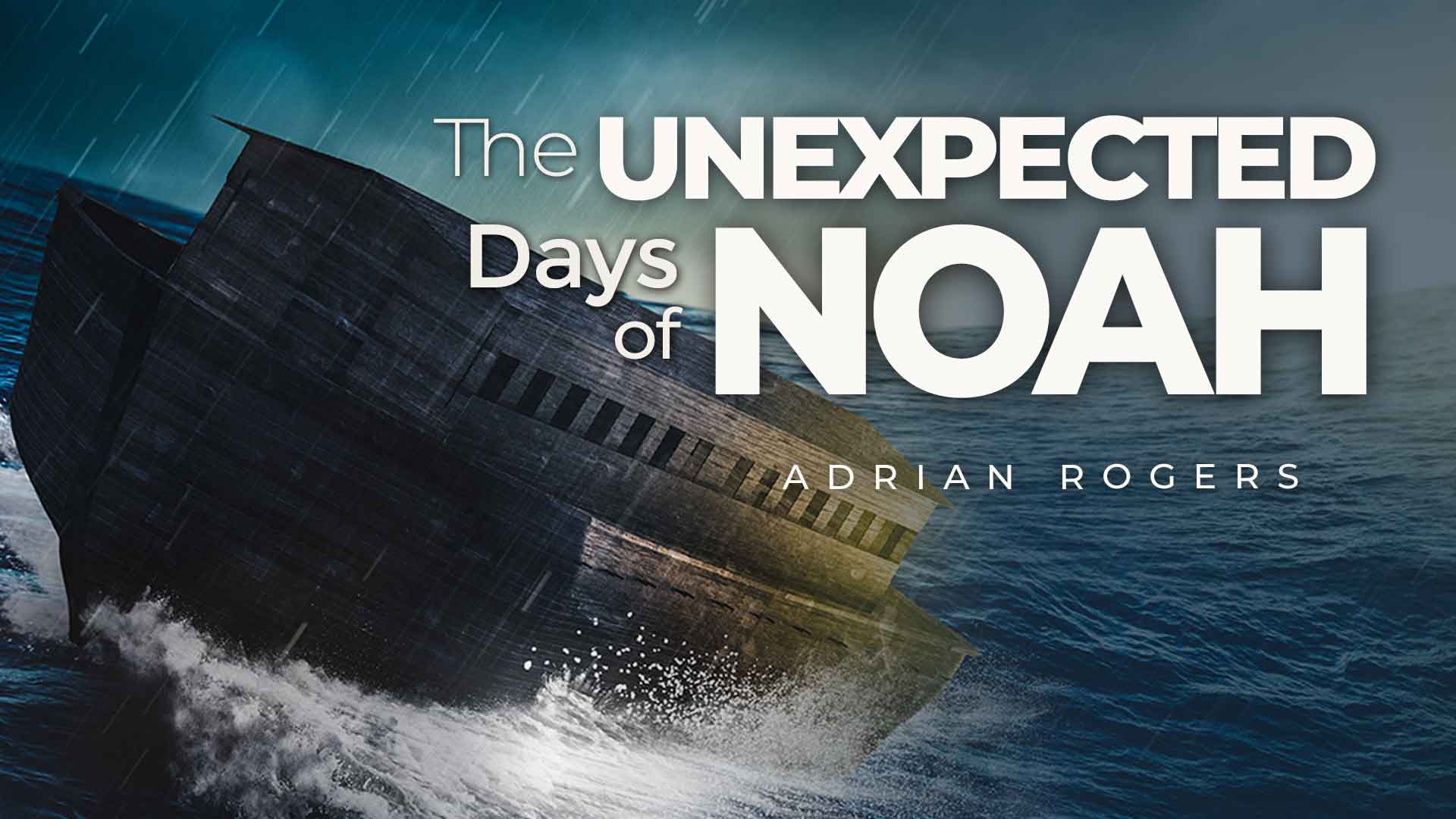 The Unexpected Days of Noah


This article is based on Pastor Adrian Rogers' message, The Days of Noah.

History is coming to a climax. No one knows when the second coming of Jesus Christ will be; it would be blasphemous to set a date. But we can know what the last days will be like.

Jesus said, “Of that day and hour no one knows, not even the angels of heaven, but My Father only. But as the days of Noah were, so also will the coming of the Son of Man be” (Matthew 24:36-37; emphasis added).

“Then the LORD saw that the wickedness of man was great in the earth, and that every intent of the thoughts of his heart was only evil continually” (Genesis 6:5).

New Age philosophies are rampant today. We have churches that were founded by Bible-believers but are no longer holding to the faith. They deny the Bible. They mock blood atonement. They do not recognize the Lordship of Christ.

In Noah’s time, the faith that was delivered to Adam, for which Abel died, was rapidly receding. We live in a day like that, too. Secularism has taken over the arts, the sciences, philosophy, and education.

The days of Noah had reached a zenith in knowledge. If you think they were plowing with sticks, consider the ark—an engineering miracle! They had great cities. (See Genesis 4:17.) There were getting into metallurgy. (See Genesis 4:22.) Man had been driven from Paradise because of his sin, and he was now trying to create an artificial paradise of wit and wisdom.

In the twentieth century, we went from horses and buggies to splitting the atom. We have so pushed back the frontiers of science that we’ve lost all ability to be surprised.

In Noah’s day, they had not reached utopia—they had not taken this scientific knowledge and turned it into good. “The earth also was corrupt before God, and the earth was filled with violence” (Genesis 6:11).

Jesus said, “They ate, they drank, they married wives, they were given in marriage, until the day that Noah entered the ark, and the flood came and destroyed them all” (Luke 17:27). Bible commentators tell us that Jesus was saying the people of Noah’s day had strayed from God’s plan of one man, one woman, till death do part. They were taking multiple wives—practicing polygamy. (Read Genesis 6:1-2.)

Think about the social plagues today.

War after war. Rebellions and upheavals everywhere—skyjacking, kidnapping, needless murder, and assault. Organized crime is a bigger business than the United States Government.

The social engineers have done their work. They’ve told us that if we wouldn’t be so uptight about sex, we could do something about sex crimes. Yet violent crimes against women today are epidemic. We were told we were too tough on criminals; now we don’t have enough space to house all the criminals. We’ve been told our churches must modernize, liberalize, and compromise. Some churches have compromised themselves right out of business. We were told that we don’t need prayer or the Ten Commandments in schools. We substitute “Thus says the mind of man” for “Thus says the Word of God.” We have reared a generation of young people with refined intellects and un-discipled emotions.

Jesus gives us further insight when He links the days of Noah with the days of Lot. (Read Luke 17:26-30.)

Lot lived in Sodom. From Sodom we get the word sodomy, which means sexual perversion. How does God feel about this sin? If you can read black on white, you don’t have to guess. Read Leviticus 20:13 and Romans 1:26-27.

When people approve sexual perversion, here is what God does:

“God also gave them up to uncleanness, in the lusts of their hearts, to dishonor their bodies among themselves…. And even as they did not like to retain God in their knowledge, God gave them over to a debased mind” (Romans 1:24,28a). The judgment is built in. Many vile diseases, such as AIDS, are the result of these sins. (See Romans 1:27.)

Where do these urges come from? They come out of the heart, which is wicked and sinful. These are the same urges that turn people toward incest, adultery, etc. People say, “I was born this way.” Yes—we are born sinners.

America is an island of prosperity and perversion ensconced in an ocean of need.

It was the same in the days of Lot and Noah. The Lord said, “Look, this was the iniquity of your sister Sodom: She and her daughter had pride, fullness of food, and abundance of idleness; neither did she strengthen the hand of the poor and needy. And they were haughty and committed abomination before Me; therefore, I took them away as I saw fit” (Ezekiel 16:49-50).

They were proud; sin that used to hide, now strutted. They had more than they needed. They were idle. At the height of their prosperity is when the fire and brimstone came. God left Sodom in smoking ruins, Peter said, “making them an example to those who afterward would live ungodly” (2 Peter 2:6b).

God never sends judgment without first sending warning. “God said to Noah, ‘The end of all flesh has come before Me, for the earth is filled with violence through them; and behold, I will destroy them with the earth’” (Genesis 6:13).

2 Peter 2:5 calls Noah a preacher of righteousness. He preached with the wrath of God in the foreground, and the ringing of hammers in the background. But the preaching did not penetrate their hearts. They had eaten of the tree of knowledge, and they saw themselves as rich and in need of nothing.

Our generation has been warned, too.

Jesus said they were eating, drinking, marrying, etc.—that is, the round of life went on. Then God said, “Behold, I Myself am bringing floodwaters on the earth, to destroy from under heaven all flesh in which is the breath of life; everything that is on the earth shall die” (Genesis 6:17).

God had said to Noah, “Come into the ark, you and all your household” (see Genesis 7:1). Then God shut the door—He shut His people in and shut others out.

Today, there is an Ark of safety. His name is Jesus. If you come to Him, He will transform you. You say, “What if it costs me?” When Noah drove the last nail into the ark, he may have had nothing left. But when he came out of the ark, he had inherited the Earth.

The Days of Noah Outline and Transcript

Why did God choose Noah?