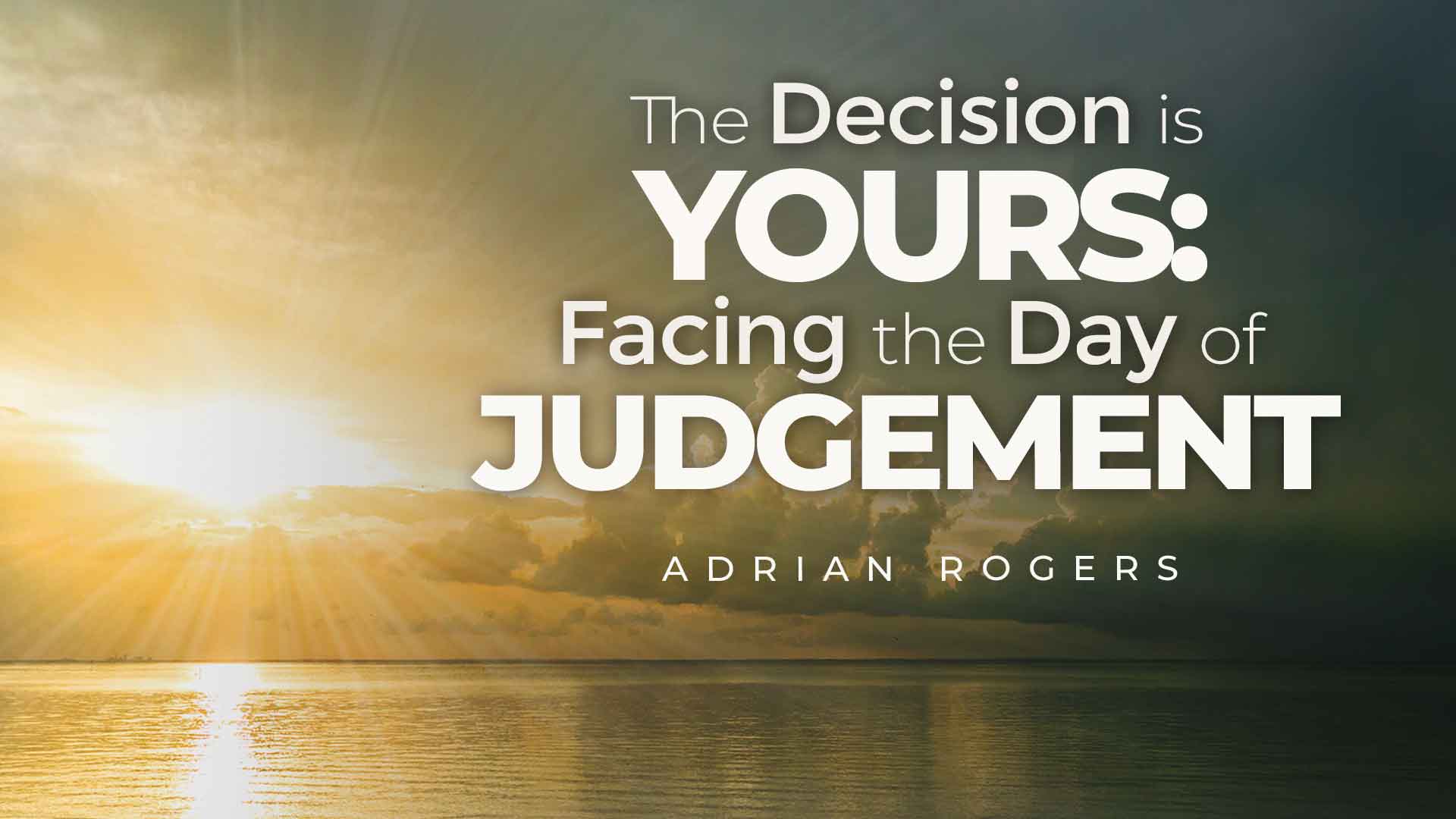 The Decision is Yours: Facing the Day of Judgement


This article is based on Pastor Adrian Rogers' message, The Final Judgement.

A day is coming when all that men have schemed for will turn to dust. Time will conclude, and the dead will rise to be judged. In Revelation 20, God gave the apostle John a vision of the last judgment.

Who Will Be the Judge?

John describes the setting for the final judgment this way: “I saw a great white throne and Him who sat on it, from whose face the earth and the heaven fled away” (Revelation 20:11a).

It may surprise you to know that Jesus Christ will be the Judge at the last judgment. Jesus Himself said, “The Father judges no one, but has committed all judgment to the Son” (John 5:22). The Bible describes Jesus as a Lamb, but also as a Lion. You will meet Him as one or the other—as Savior, or as Judge.

“His head and hair were white like wool, as white as snow, and His eyes like a flame of fire; His feet were like fine brass, as if refined in a furnace, and His voice as the sound of many waters; He had in His right hand seven stars, out of His mouth went a sharp two-edged sword, and His countenance was like the sun shining in its strength” (Revelation 1:14-16).

Jesus is the one sitting upon the throne. “And there is no creature hidden from His sight, but all things are naked and open to the eyes of Him to whom we must give account” (Hebrews 4:13).

Who Will Be Judged at the Final Judgment?

When God says, “Come,” we will come. However insignificant you think you are, or however powerful you fancy yourself to be, you will stand before God. There will be five categories of people facing judgment:

Those who hate God, hate Christ, hate the Bible, hate preachers, etc. They brazenly shake their puny fists, and say, “God—if there is a God—you’re not big enough to make me serve You. I will not bow.” There are plenty of these.

Some of these are in our churches. These think that because they’re not among the sinners talked about above, they are Heaven-bound. They think the gospel is for thieves, murderers, and drunkards, but not for them. They are nice people! These people strut to Hell, thinking they are too good to be damned.

“But we are all like an unclean thing, and all our righteousnesses are like filthy rags” (Isaiah 64:6a).

They know they need to be saved, and they intend to be…someday. The devil will whisper in your ear, “Not today—there’s always a better time.”

But the Bible says, “Do not boast about tomorrow, for you do not know what a day may bring forth” (Proverbs 27:1).

“He who is often rebuked, and hardens his neck, will suddenly be destroyed, and that without remedy” (Proverbs 29:1).

“You do not know what will happen tomorrow. For what is your life? It is even a vapor that appears for a little time and then vanishes away” (James 4:14).

They think it’s all settled—they joined a church, got baptized, etc. They somehow have religion, but they do not have Christ. They have their name on the church roll, but not in the Lamb’s Book of Life. They have never repented of their sin and put their faith in Jesus Christ. The devil would as soon send you to Hell from a pew as from a gutter.

5. Those Who Have Never Heard the Gospel

They do not know. They don’t have light to save them, but they do have sin to condemn them. “That servant who knew his master’s will, and did not prepare himself or do according to his will, shall be beaten with many stripes. But he who did not know, yet committed things deserving of stripes, shall be beaten with few” (Luke 12:47-48a).

But you have heard the Word of God. Therefore, you would be the one who knew your Master’s will and did not do it.

What Will Happen at the Final Judgment?

Your Secrets Will Be on Display

“I saw the dead, small and great, standing before God, and books were opened. And another book was opened, which is the Book of Life. And the dead were judged according to their works, by the things which were written in the books” (Revelation 20:12).

God is recording secret things. “For God will bring every work into judgment, including every secret thing, whether good or evil” (Ecclesiastes 12:14). Things your mother, father, spouse, and children don’t know about. Things you have long forgotten.

Jesus said, “I say to you that for every idle word men may speak, they will give account of it in the day of judgment” (Matthew 12:36).

Your Sentence Will Be Determined

What will happen to the unsaved in the final judgment?

You won’t bribe this judge. No slick lawyer is going to get you out. God swears by Himself that you will be judged. (See Romans 14:11.)

You are not saved by works, but you are judged by works. There will be no “mercy of the court.” If you want mercy, grace, and forgiveness, you may have them! But you must have them now. Do not hear the Gospel preached, turn your back on it, and then have the unmitigated gall to stand before God and ask for mercy! (Read Hebrews 10:28-31.)

Evidence will be presented.

The books are opened. What is the evidence?

Your deeds. Every lie, curse, and infidelity.

Your influence. Whom did you influence to do wrong?

You will make your defense.

Imagine: you are standing before Jesus Christ. You have ignored Him, cursed Him, turned your back on Him. What will you say? “Wait a minute, Lord! Did you know there were hypocrites in that Church?”

Christ will reply, “I did not say to believe on the hypocrites. I said, believe on Me.”

Excuses like these don’t even satisfy you. How do you expect they will satisfy a righteous and holy God?

The verdict will be handed down.

The broken-hearted Savior will say, “Whoever denies Me before men, him I will also deny before My Father who is in heaven” (Matthew 10:33).

What will happen to Christians in the final judgment?

If you are a Christian, you will not stand before the great white throne. Why? Because your case was settled out of court. Christ has your heart, and on the cross, Jesus Christ took your sin and your judgment. Thank God: “There is therefore now no condemnation to those who are in Christ Jesus” (Romans 8:1a)! The fire of God’s judgment cannot come where it has already been.

The Final Judgment Outline and Transcript

Who will be judged at the final judgement?

What is the final judgement in the Bible?

What is the point of the final judgement?