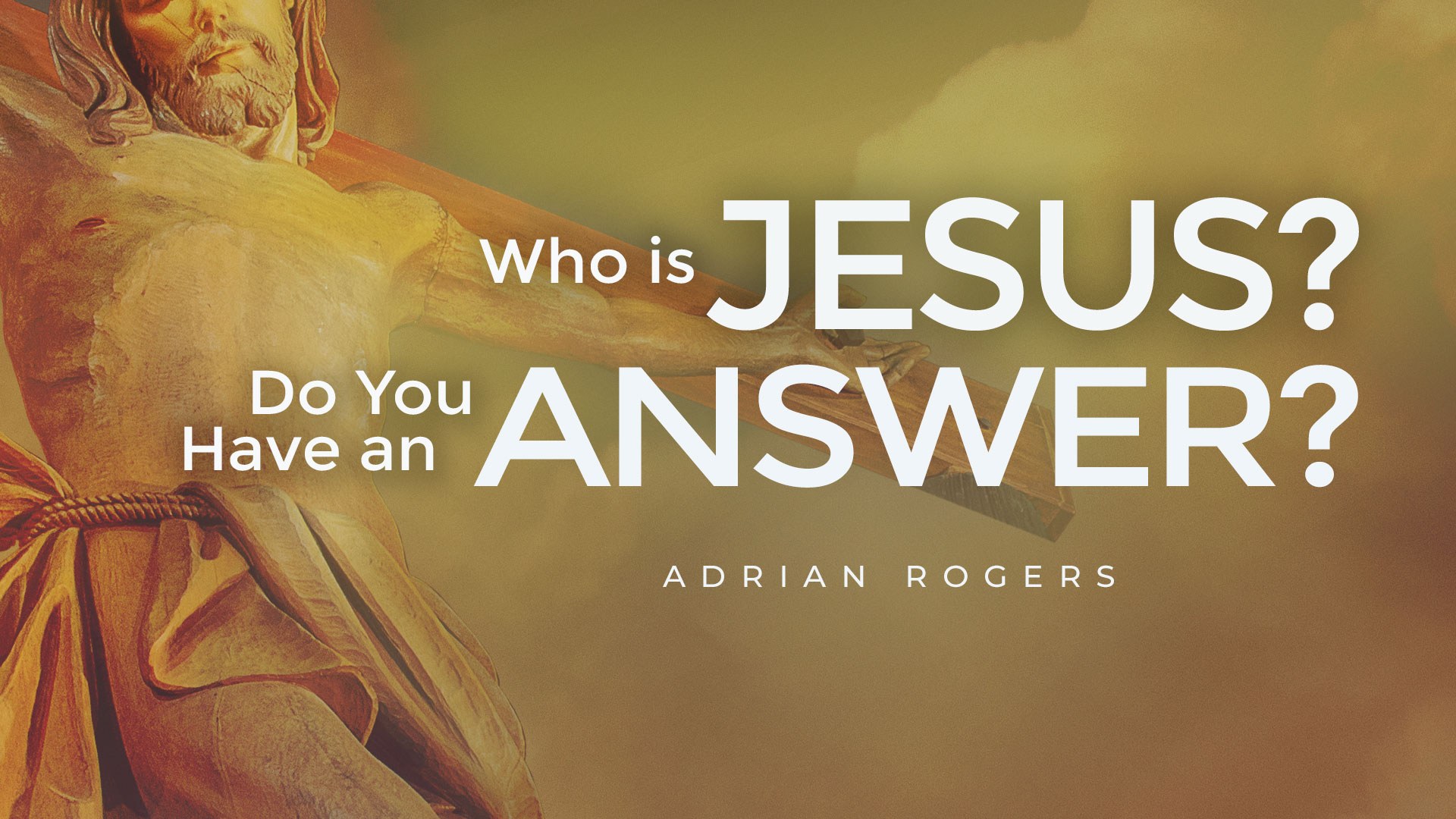 
This article is based on Pastor Adrian Rogers' message, Who is Jesus? The God-Man.

Many people have asked, “Just who is Jesus Christ?” A copy of U. S. News and World Report ran a cover a few years ago with an artist’s depiction of Jesus and the title “The Jesus Code—America Is Rethinking the Messiah Again.” In 2000, a major TV network aired a documentary, “The Search for Jesus,” featuring “scholars” who pooled their ignorance. As they attempted to examine the Lord Jesus Christ, it was like a group of blindfolded men in a cave with a jug of lightning bugs trying to examine the noonday sun. They didn’t find Him because they were looking in the wrong place.

In December 1994, the cover of Life magazine featured a painting representing Jesus with three words superimposed across it: “WHO WAS HE?” That’s the wrong question. They should ask, “WHO IS HE?” The world will never answer the sin question until it answers the Son question: Who is Jesus?

Someone has estimated that the number of people who have ever lived in recorded history on planet Earth is about 30 billion. Only a handful have risen to such prominence that they changed the course of human history. Among them, one name stands above all others: Jesus Christ. No other person has attracted such attention, devotion, criticism, adoration, and opposition.

He lived in the flesh about 2,000 years ago in the small country of Israel, yet His birthday divides history’s timeline into “B.C.” and “A.D.” Jesus’ earthly ministry lasted three short years, yet His message travels around the world by radio, TV, and internet. Any time you look at your watch, millions at that moment will be studying His Word. He had no formal education, yet His life caused the founding of more colleges, seminaries, and universities than any other. Multiple thousands of hospitals and orphanages have been built in the name of Jesus Christ.

In a television interview with Larry King, someone asked, “Larry, if you could meet God and ask Him one question, what would it be?” Larry King said, “I would ask Him if He has a Son.” I hope Larry learns the answer to that question.

Noted historian Kenneth Scott Latourette said, “Jesus has had more effect on the history of mankind than any other ‘man’ who ever existed. Nobody has had the influence Jesus Christ of Nazareth has had. To explain Him is impossible. To ignore Him is disastrous. To reject Him is fatal. My speech is too limited to describe Him, my mind too small to comprehend Him, and my heart too inadequate to fully contain this One whose name is Jesus.”

To rightly answer the question “Who is Jesus?” we must go to the divinely inspired Word of God.

Philippians chapter 2 is a good place to begin because of all we learn there about Jesus.

Who, being in the form of God did not consider it robbery to be equal with God, but made Himself of no reputation, taking the form of a bondservant, and coming in the likeness of men. (Philippians 2:6-7)

The Infinite becomes an infant, fulfilling Isaiah 7:14, “Behold, a virgin shall conceive and bear a son...”

Do you find it hard to believe Jesus was born of a virgin? You’re not alone. The first to struggle with it was Mary herself. “How can this be?” she asked. The angel answered, “For with God nothing will be impossible” (Luke 1:37).

If you admit God created the first man out of nothing, don’t you think God could bring a baby into this world through a virgin?

If you reject the Virgin Birth, you’ve got some character problems.

"And being found in appearance as a man, He humbled himself and became obedient..." (Philippians 2:8).

He was the obedient Son of God. Not one time did Jesus ever transgress the Father’s will. He said, “I always do those things that please Him” (John 8:29). God the Father said of Him, “This is My beloved Son in whom I am well pleased” (Matthew 3:17 and 17:5).

Satan unleashed all the artillery of Hell against the Lord Jesus Christ but never once got Him to sin. “The ruler of this world [Satan] is coming,” Jesus said, “and he has nothing in Me” (John 14:30).

When Philippians 2:6 says “to be equal with God,” it’s important to understand that Jesus is not only the Son of God, but He is God the Son, God in the flesh. Muslims, Mormons, Jehovah’s Witnesses, and our Jewish friends do not believe it. But by the authority of God Himself, Jesus makes this claim. In Hebrews 1:8, Jehovah is speaking: "But to the Son, He [Jehovah] says, “Your throne, O God, is forever and ever...”

God calls His Son, the Lord Jesus, “God.” He is God the Son. God says it through the prophet Isaiah, “…the Mighty God, the Everlasting Father...” (Isaiah 9:6). He is the sovereign Son of God.

One time the Pharisees were arguing with Jesus. Sneering at His birth, they boasted that they had Abraham for their father: “We know about your birth—you’re illegitimate. We’re not. Don’t give us ‘virgin birth.’” Then Jesus said something that rocked them back on their heels.

They said, “Wait a minute. Abraham’s been dead for centuries. How can you say ‘Abraham saw my day’?” Jesus answered—don’t miss this—“Before Abraham was, I AM” (John 8:58).

Jesus purposefully used the holiest name the Jews had for Jehovah: “I AM,” the sacred name for the self-existing Almighty God. At that moment they “took up stones to stone Him,” because He clearly stated He is co-equal and co-eternal with God the Father.

Jesus was never created. He is the great I AM. If you take away the deity of Jesus Christ, Christianity collapses like a house of cards. Friend, Jesus is God in human flesh. This is fundamental. Jesus is the supernatural, sinless Son of God, born of a virgin. He is supernatural, sinless, and sovereign--God in human flesh. No wonder they wanted to stone Him when He said this.

...but made Himself of no reputation, taking the form of a bondservant, and coming in the likeness of men. And being found in appearance as a man, He humbled Himself and became obedient to the point of death, even the death of the cross. (Philippians 2:7-8)

Jesus Christ, the sovereign, sinless, supernatural Son of God, born of a virgin, was totally, completely obedient. Further confirmation that Jesus is God is found in Acts 20:28. Paul speaks to the pastors of the church in Ephesus:

Therefore, take heed to yourselves and to all the flock, among which the Holy Spirit has made you overseers, to shepherd [now watch this next phrase] the church of God which He purchased with His own blood.

God, the Shepherd of the Church, purchased it with His own blood. Jesus is not only the Son of God but also God the Son. You say, “That’s a mystery to me.” It may be a mystery to you, but it is a fact.

And without controversy, great is the mystery of godliness: God was manifested in the flesh, justified in the Spirit, seen by angels, preached among the Gentiles, believed on in the world, received up in glory. (1 Timothy 3:16)

Great is the mystery…God was manifested in the flesh.

He survives the ages. He’s not somewhere in a tomb but actively involved in our lives: “Therefore He is also able to save to the uttermost those who come to God through Him, since He always lives to make intercession for them” (Hebrews 7:25).

Why Christmas? Because of Calvary. Christmas makes Calvary possible, “for the Son of Man [God in human flesh] has come to seek and to save that which was lost” (Luke 19:10).

Who is Jesus? The supernatural, sinless, sovereign, sacrificial, surviving Son of God.

Friend, you have a date with deity. One day you will meet the inescapable Lord Jesus Christ.

How to Become a Christian