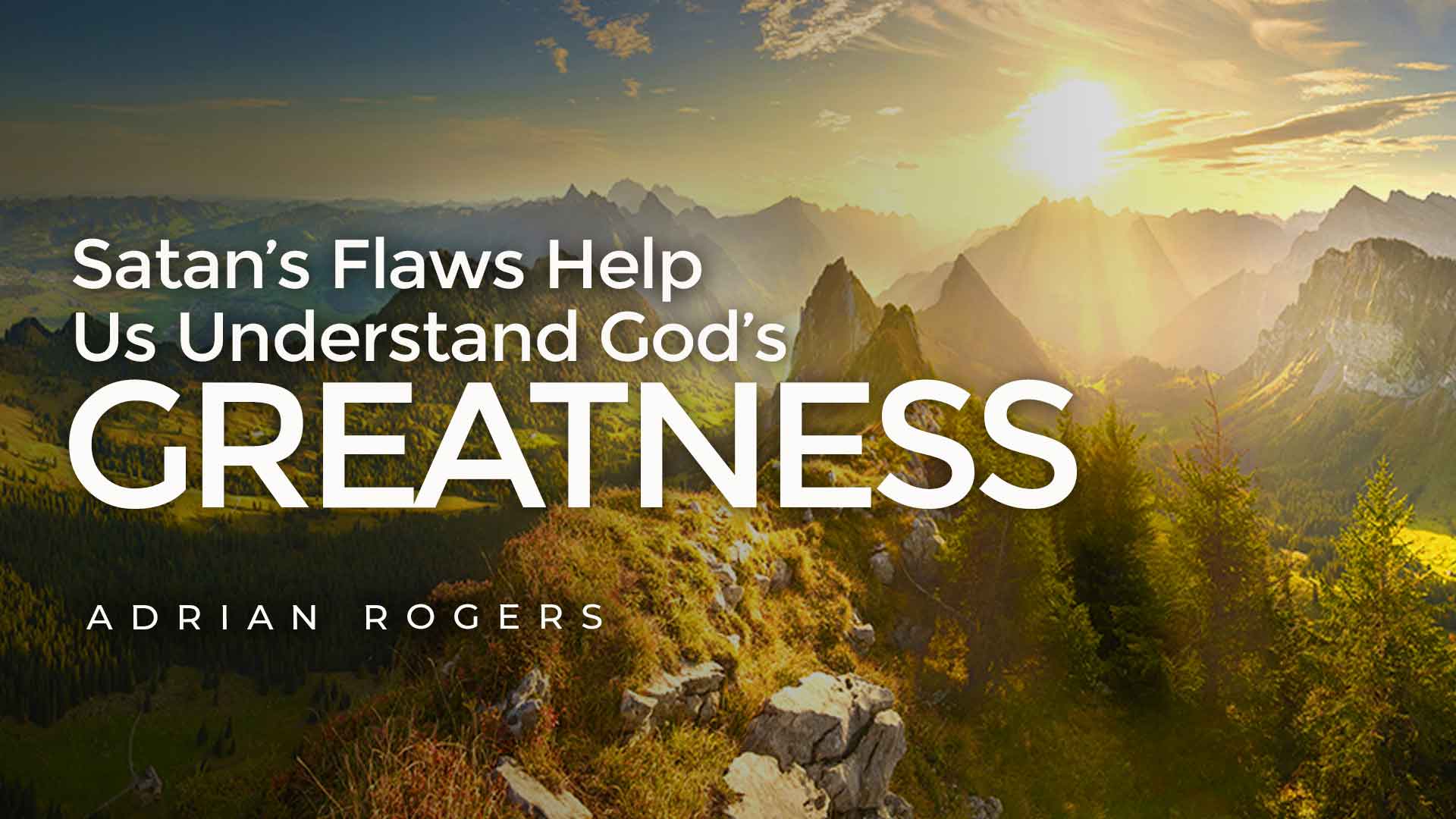 
This article is based on Pastor Adrian Rogers' message, Satan's Four Spiritual Flaws.

Who is Satan? Jesus said, “He was a murderer from the beginning, and does not stand in the truth, because there is no truth in him. When he speaks a lie, he speaks from his own resources, for he is a liar and the father of it” (John 8:44b).

Not only is Satan the master liar, but he lies about the biggest subject: God. If you believe the wrong thing, it’s no difficulty for you to do the wrong thing.

What the devil did to corrupt Eve long ago, he is doing to corrupt you. He taught Eve four spiritual flaws:

“Now the serpent was more cunning than any beast of the field which the LORD God had made. And he said to the woman, ‘Has God indeed said, “You shall not eat of every tree of the garden”?’” (Genesis 3:1) In other words, God is a cosmic killjoy. He doesn’t want you to have this good fruit.

But actually, “The LORD God commanded the man, saying, ‘Of every tree of the garden you may freely eat; but of the tree of the knowledge of good and evil you shall not eat, for in the day that you eat of it you shall surely die’” (Genesis 2:16-17). There was only one forbidden tree.

Satan was trying to get Eve to think of God as straight-laced and cruel, saying “no” to every pleasure. But the truth is that God loves His children. You cannot imagine the splendor and pleasures of Eden! God made paradise for Adam and Eve, then said, “Help yourself.”

“Delight yourself also in the LORD, and He shall give you the desires of your heart” (Psalm 37:4).

“For the LORD God is a sun and shield; the LORD will give grace and glory; no good thing will He withhold from those who walk uprightly” (Psalm 84:11).

“Command those who are rich in this present age not to be haughty, nor to trust in uncertain riches but in the living God, who gives us richly all things to enjoy” (1 Timothy 6:17).

Anybody who denies the veracity of the Word of God is doing the work of the devil. Man today will do anything except believe God’s truth.

The philosopher Hegel introduced relativism to society. Our kids are taught in school today that there are no absolutes. All truth is relative.

Others—especially some churches—give themselves over to subjectivism: “This is what it means to me. We all have our own truth.”

If they could put God in a test tube, rationalists might believe in Him. Instead of “Thus says the LORD,” puny man says, “Thus says the mind of man.”

This one is working hard today! We don’t ask, “Is it true?” We just want to know, “Does it work?”

Post-modernists don’t believe there is truth. “There never has been truth. There never will be. We make it up as we go.” This leaves people with no rational basis for right and wrong.

What has happened to make our culture like this? There is a famine for the Word of God. Kids today do not know there is a fixed standard, because the devil has gotten people to think skeptically about God and disbelieve His Word.

Next, Satan wanted Eve to think carelessly about God. He told her not to worry about judgment. (See Genesis 2:4.)

Not only is God good, but righteous. The righteousness of God means that He will punish sin. “In the day that you eat of it you shall surely die” (Genesis 2:17b). That was not advice. That was God’s holy law.

Satan knows that man fears death. He is still saying this. Eastern Mysticism and New Ageism teach reincarnation. If your “karma” is good, you keep getting higher. You get as many chances at perfection as you need! Satan does not want people to believe there is a holy God’s judgment to face.

Satan said to Eve, “For God knows that in the day you eat of it your eyes will be opened, and you will be like God, knowing good and evil” (Genesis 3:5). In other words, All you have is His word for what is right and wrong. Experience is the best teacher—but God doesn’t want you to be liberated.

The Bible speaks of “the deceitfulness of sin.” (See Hebrews 3:13.) Those who are deepest in sin know the least about it. They develop reprobate minds. They can’t tell up from down.

Satan was not trying to get Eve to steal, kill or commit adultery. What is the bait he used? “You will be like God.” There is one God! He is distinct from everything else. But Satan told Eve, “You can be your own little cheap, tin God!” Eastern religion and pantheism teach that we are all gods. Millions of people look at their "gods” every morning in the mirror. They want to be independent and autonomous. They want to be their own gods. But they will die and be eternally lost, because they are converts of the devil’s four spiritual flaws.

This lie that you will be “like God” sounds so much like the truth. God did make us in His image. He is working until one day, the redeemed will rise in His likeness. (Read Psalm 17:15, 1 Corinthians 15:51-52.)

In Genesis, Satan’s doom is declared. (Read Genesis 3:14-15.) In Revelation, it is carried out. “So the great dragon was cast out, that serpent of old, called the Devil and Satan, who deceives the whole world; he was cast to the earth, and his angels were cast out with him….And they overcame him by the blood of the Lamb and by the word of their testimony, and they did not love their lives to the death” (Revelation 12:9,11; emphasis added).

“…And they did not love their lives to the death.” This doesn’t simply mean they kept loving Jesus until they died. It means that they would serve Christ even if they had to die for their faith.

Who is Satan in the Bible?