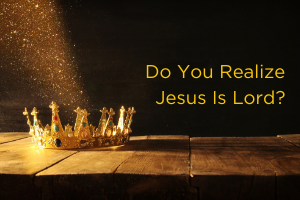 Do You Realize Jesus Is Lord?

Do you believe Jesus Christ is Lord? If you do, then may I ask, “Is He your Lord?” Don’t answer quickly. Think about it. It’s one thing to say, “Yes, I believe Jesus is Lord.” But is He Lord of your time, talents, treasure, and testimony? Is He truly Lord? It’s one thing to sing “Bring forth the royal diadem and crown Him Lord of all.” It’s another thing to mean it.

Sometimes you’ll hear a person say, “I decided to make Jesus my Lord.” Too late for that. He already is. As Peter declared to the thousands gathered in Jerusalem on the day of Pentecost, “Therefore, let all the house of Israel know assuredly that God hath made that same Jesus whom ye have crucified both Lord and Christ” (Acts 2:36).

The question is not “Will you make Him Lord?” but “Will you submit to His Lordship”?

He is called “Lord” far more often than He is called “Savior.” God has already declared Him Lord. If you miss that, you miss the meaning of Christmas. You must take the cradle, the cross, and the crown, and put them together, or you don’t have the true story of Christmas. He is King of Kings and Lord of lords.

Think back to that day when His mother, Mary, heard the angel Gabriel say, “Thou shalt call His name Jesus.” The name means “Jehovah saves.” In the Old Testament, “Jehovah” is translated “Lord” 7,000 times. When a pious Jew came to the word translated “Jehovah” in Scripture, he would bow his head and worship. He held it in such awe, he would never even pronounce it. When a scribe translating the scriptures came to “Jehovah,” he would put down his old pen and get a new pen just to write that word.

That night when the angel announced, “For unto you is born this day in the city of David a Savior, who is Christ the Lord,” it could mean only one thing to those Jewish shepherds: the child born in Bethlehem is the Jehovah—God Almighty—who saves. The angel was saying “He is co-equal, co-eternal with the Almighty. His given name is ‘Jehovah saves.’” Think what it meant for the shepherds to bow and worship Him.

I’m amazed that God sent the message to humble shepherds. Herod the King never did quite get it. The lowly shepherds understood. “God has hidden these things from the wise and prudent and has revealed them unto babes” (Luke 11:21).

Calling Jesus “Lord” was costly. And think what it meant for a Gentile in those days to say, “He is Lord.” Rome held sway over the world. The Emperor was Caesar. More than an emperor, Caesar was a god to these people. He proclaimed himself a god. To get along in that empire you had to say “Caesar is Lord.” For a pious Jew or a Gentile to say “this child in Bethlehem is Lord” was costly. They were saying “Caesar is not Lord. There is one Lord, and His name is Jesus.”

They could have gotten along splendidly with their Roman rulers if only they’d say, “Jesus is a god.” They could put Him in a little niche in the Pantheon with all the other Roman gods. But at the cost of their lives, they said, “Neither is there salvation in any other. For there is none other name under heaven given among men whereby we must be saved” (Acts 4:12). That’s why so many were put to death.

Why did the Lord Jesus Christ come to earth?

Why did God the Son, the Second Person of the Trinity, step out of heaven’s splendor and for a while lay aside His glory? Why did Jesus become a man? Why the virgin birth? So that He might become a sacrifice upon the cross. And in so doing, He brought Satan’s kingdom crashing down.

Listen to these verses:

"For to this end Christ both died, and rose, and revived, that He might be Lord both of the dead and living" (Romans 14:9).

"As I live, sayeth the Lord, every knee shall bow to Me and every tongue shall confess to God" (Romans 14:11).

"…[God] has given Him a name that is above every name: That at the name of Jesus every knee should bow, of things in heaven and things in earth and things under the earth, and every tongue should confess that Jesus Christ is Lord to the glory of God the Father" (Philippians 2:9-11).

Will You Recognize His Lordship?

Do you want to understand who Jesus Christ is? Then lay your intellectual pride in the dust, come to Him and say “Lord, reveal this truth to me.” It is the only way to be saved.

“That if thou shalt confess with thy mouth that Jesus is Lord and shalt believe in thine heart that God hath raised Him from the dead, thou shalt be saved. For with the heart man believeth unto righteousness; and with the mouth confession is made unto salvation” (Romans 10:9-10). What is the confession? That Jesus is Lord.

When you confess His Lordship, you secure your salvation.

This Christmas I’m not asking, “Do you believe in His Lordship?” but “Is Jesus Christ your Lord?” If He is not your Lord, you’re not saved. You say, “Well, I accepted Him as Savior.” The Bible never says accept Him as Savior. The Bible says to receive Him as Lord.

You cannot come to Jesus saying, “I’ll have a little Saviorhood today but no Lordship, thank you.” It’s not a cafeteria line. You cannot have a “Come in, Savior” and a “Stay out, Lord” salvation. You cannot receive what Jesus gives—salvation—and refuse who Jesus is, the Lord. The angel said “… a Savior which is Christ the Lord.”

He was born a king. “…the government shall be upon His shoulder…” and “Of the increase of his government and peace there shall be no end, upon the throne of David, and upon his kingdom, to order it, and to establish it with judgment and with justice from henceforth even forever” (Isaiah 9:6-7).

This little baby was born a king and He is King. We didn’t elect Him, and friend, we’ll not impeach Him. He is King. He is Lord.

You can receive Him as your Lord. You can bow your knee to Him and say, “O Lord, You are the King. The government is upon Your shoulder. I yield my heart to You.”

Have you received Him as your Lord? You can do that right now.