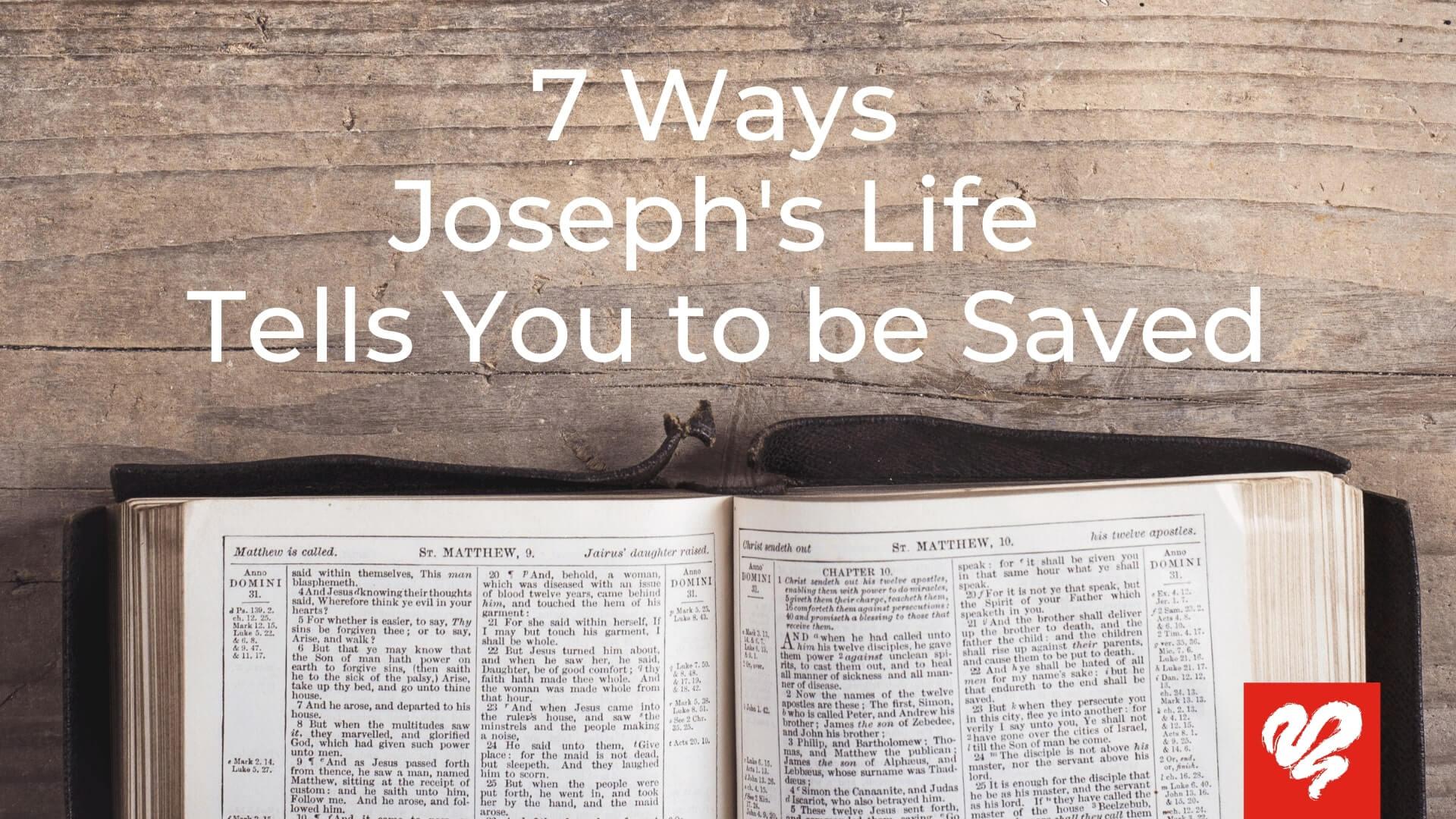 7 Ways Joseph's Life Tells You to Be Saved


This article is based on Pastor Adrian Rogers' message, The Gospel According to Joseph.

God wants every man, woman, and child to be saved so badly, He went to extraordinary lengths in the Bible to give us pictures, glimpses, analogies—portraits of how our salvation was won. To redeem us cost Him the painful, torturous death of His beloved Son, the Lord Jesus. In all of these, God is saying, “See this picture?” “See that one?” He’s committed to our understanding that Jesus is the “Lamb slain before the foundation of the world” (Revelation 13:8). He paid the cost at Calvary so every person could be restored to Him for eternity, for there is no one so good they need not be saved and none so bad they cannot be saved. One of the most amazing of those illustrations is the life of Joseph.

Joseph’s story is as fresh today as it was 38 centuries ago. He is an Old Testament portrait of Jesus Christ. When we see how Joseph foretold Jesus’ life, we know without doubt that man did not write the Bible. Each page was divinely inspired, for Joseph tells the Gospel nearly 2,000 years before Jesus came to earth.

The beloved son of his father, Jacob

The suffering servant sold into slavery by his jealous brothers

The seeking savior who sought, forgave, and restored fellowship with his brothers.

His life set off a chain of events resulting in salvation for his brothers and depicting seven aspects of salvation in Christ.

Reviewing those events, Joseph’s brothers terribly rejected him, threw him into a pit, lied about him to his family, declared him dead, and forgot about him—or at least they tried. Later, caught in widespread famine, they came begging to Pharaoh’s court, where they’d heard food was available. They weren’t seeking Joseph. They stood before a man they didn’t recognize, though he was the brother they had betrayed.

In appearance, he’s much different from the 17-year-old they sold into slavery. Yet foreshadowing the Lord Jesus Christ, Joseph loves them and wants to forgive and restore them. He commissions them to tell everyone he’s alive and reigning in Egypt. The parallels between Joseph and Jesus aren’t coincidental but part of God’s overarching plan.

God’s love is greater than all our sin. When Joseph’s traitorous brothers stand helpless and hungry before the brother they betrayed—now the second most powerful man on earth—what does Joseph do? Get revenge? Have them executed? Throw them into a pit as they did him? No. When he reveals who he is, his first words are, “I am Joseph…Come to Me” (Genesis 45: 3-4).

Imagine hearing those words, knowing what they had done. They were terrified. In the same way, Jesus must reveal Himself to us for us to be saved. Like the brothers, the lost aren’t for the most part running around seeking Jesus (Romans 3:11-12). He must reveal Himself, as Joseph did.

If you’re familiar with the story, Genesis 45 is not Joseph’s first encounter with his brothers. The story goes back to Genesis 42, the first time they arrive in Egypt. They have no clue who he is. Joseph gives them a hard time at first, testing them as they travel back and forth between Egypt and their home in Canaan. Now in Genesis 45, after they’ve been thoroughly tested and are at their wit’s end, Joseph is ready to reveal who he is.

Friend, learn this about God. In His love for us, He tests us. Problems will arise. The worst thing that could happen to hell-bound sinners would be a life of ease—no pain or problems. If we never had problems, we wouldn’t come to God. Pain is the silken cord He uses to draw us to Himself. God loves you. “God commendeth His love toward us, in that while we were yet sinners, Christ died for us” (Romans 5:8). His love is greater than all our sin. Say to yourself, especially if you’re not saved yet, “God loves me.”

No one is truly saved without conviction and repentance. Even if it seems God let the bottom fall out of your life, it’s meant to convict you about your sin. Joseph brought his brothers to a point of great conviction. He had absolute authority to put them to death if he wished. That’s all of us before we come to Christ in repentance. You must be convicted of sin to be saved.

Joseph, the exalted sovereign, says “Come to me. My suffering was for your benefit. God meant it for your good. He sent me to be your deliverer.” He was second only to Pharaoh, yet Joseph offered his brother's grace.

They had a quick decision to make. Taking a step of faith, they came toward Joseph. Jesus offers us the same saving grace. How are we saved? By grace, through faith.

"For by grace you have been saved through faith, and that not of yourselves; it is the gift of God" (Ephesians 2:8).

Two thousand years before Paul wrote to the Ephesians, Joseph said, “All this is the grace of God. You sold me into slavery, but God had a purpose. Even in your wickedness, God was working behind the scenes to provide a savior, bringing it all together for His glory.” Joseph doesn’t minimize their sin; he emphasizes God’s grace. At Calvary, the world’s greatest tragedy was God’s greatest victory when Jesus died for the sin of all mankind.

Redeemed, forgiven, and commissioned to fellowship with the King (Genesis 45:14-15), Joseph’s brothers return home to tell his family what God had done through him, to proclaim his exalted position, and bring them to live with him where he reigned (Genesis 45: 9-12).

In Matthew 28:18-20, Jesus gave us the Great Commission to tell the world what God has done through Him. Both Joseph’s brothers and we can share the same message:

We once rejected Him.
God has raised Him on high.
Now He has a name above every name.
The world is at His feet.
He is the fairest of ten thousand.
He has forgiven all our sins.
He wants us to be with Him and to share His glory.

If you’re not saved, God wants to save you. Why has He redeemed you? Jesus loves you. He wants to talk with you, weep with you—He wants more than servants. He wants you to know Him, love Him, and fellowship with Him.

God saves us entirely by grace, then from His abundance supplies us for service. Joseph sent his brothers home with wagonloads of Egypt’s best: gold, silver, clothes, food (Genesis 45:16). The resources of the throne of the mightiest nation on earth were laid at their feet. If they needed anything, they only had to ask in the name of Joseph. He never mentioned their guilt. It was forgotten, blotted out. He called them brothers.

This is just like the Lord Jesus. He forgives our sins and sends us out with the riches of His grace and the Holy Spirit’s anointing, calling us His brethren (Hebrews 2:11). He says, “You go and I’m with you. Whatever you need to get the job done, I will supply” (Philippians 4:19). For those of us who are saved, “the same Lord over all is rich to all who call upon Him” (Romans 10:12).

When the brothers took Joseph’s news to their father, it was too much for Jacob to take in. To the Jacobs of this world, we’re to communicate the message of Jesus. We’ll convince them by our love, our words, and our lives. When they see Jesus’ brethren bringing wagonloads of God’s grace, when they see something in us they can’t explain apart from God, they will believe.

Has the Gospel according to Joseph struck a chord in your heart? If you’re saved, does it challenge you to face hardship, knowing God has a higher purpose? He longs for us to reflect His Son, the Lord Jesus.

If you’re not saved, I want you to know God loves you. Whatever you have done—I don’t care—God will save you.

If you want to be saved, pray like this: “Lord, I need You. My sufferings are just the cords You’re using to draw me to You. I know You love me. Lord, You have revealed Yourself to me. You’ve said, ‘I’m Jesus. Come to me.’ Lord, I come. By faith, I trust You to save me. And, Lord, help me never to be ashamed of You. Give me the courage to make it public. In Your name, I pray. Amen.”

Did you pray that prayer? If you did, we’d love to celebrate with you and give you some free resources. Click here to get those resources.

The Gospel According to Joseph (2253)

The Gospel According to Joseph (2253)

How to Become a Christian