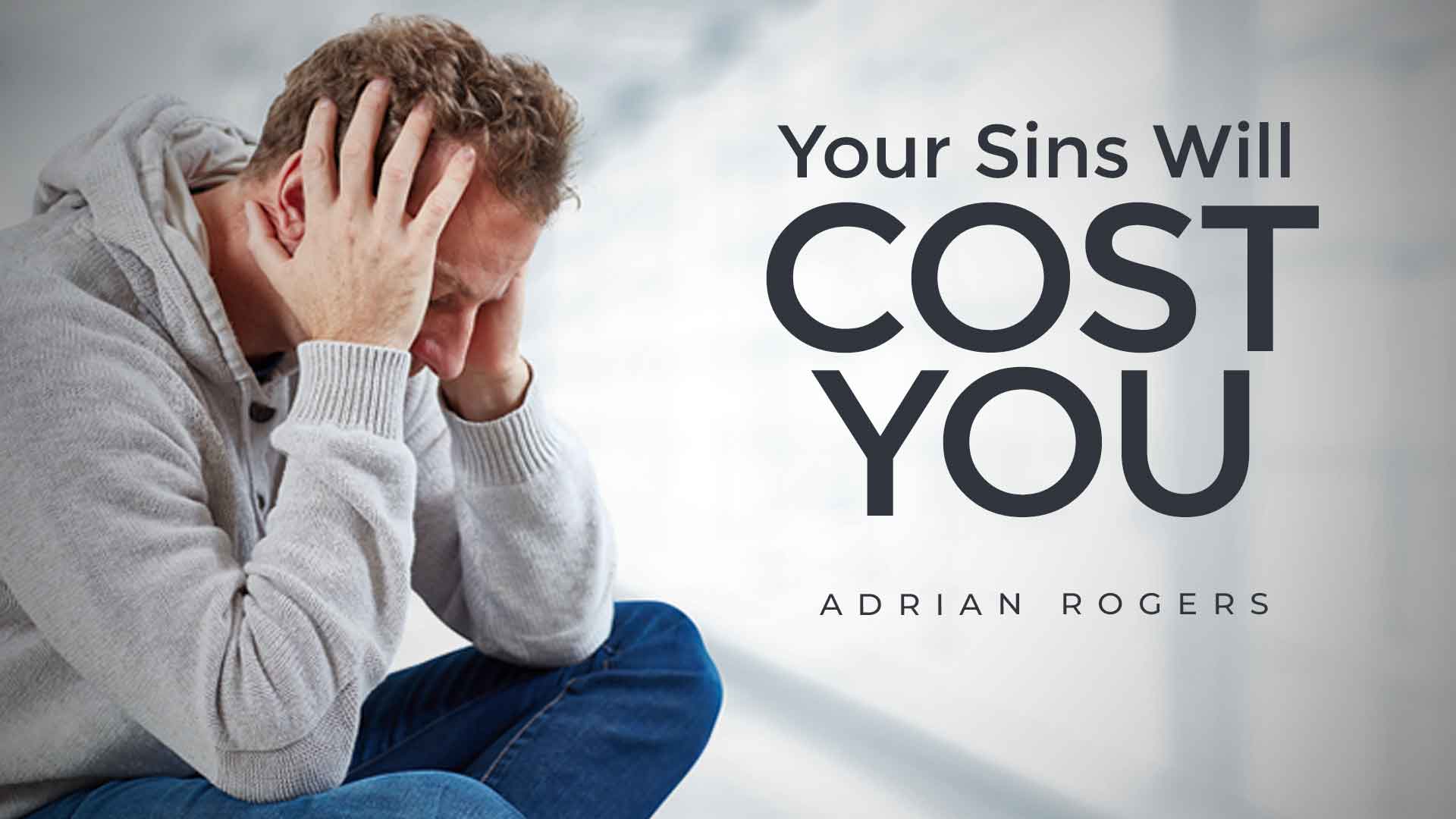 Your Sins Will Cost You


This article is based on Pastor Adrian Rogers' message, The High Cost of Low Living.

David was a man after God’s own heart. What a king! He killed a lion and a bear, then—as a lad—killed Goliath. And what a poet and musician! Yet, he was humble and noble.

The Causes of David’s Sin

“It happened in the spring of the year, at the time when kings go out to battle, that David sent Joab and his servants with him. ...But David remained at Jerusalem” (2 Samuel 11:1).

David had taken off his armor. He began to take victory and God’s blessing for granted. David’s strength was his integrity, but he fell at the point of his integrity because he got careless. An unguarded strength is a double weakness. (See Proverbs 4:23.)

David had not planned to sin that day. He was walking on his rooftop…

“He saw a woman bathing, and the woman was very beautiful to behold. So David sent and inquired about the woman. And someone said, “Is this not Bathsheba, the daughter of Eliam, the wife of Uriah the Hittite?” Then David sent messengers, and took her; and she came to him, and he lay with her” (2 Samuel 11:2b-4a).

David never dreamed he would do such a thing. Never! But often, sin is a combination of: 1) an undetected weakness, 2) an unexpected opportunity, and 3) an unprotected life. That is why we must do as Christ taught us and pray, “Do not lead us into temptation, but deliver us from the evil one” (Matthew 6:13a; see also Matthew 26:41).

David thought, “I’ll bring her husband home from the battlefield. They will spend the night together, and he will think it’s his child.”

But Uriah said, “I can’t be having romance with my wife when my fellow soldiers are on the battlefield.” Instead, Uriah slept outside David’s door, to protect his king. (See 2 Samuel 11:9-11.)

So David wrote to Joab, his commander-in-chief: “Set Uriah in the forefront of the hottest battle, and retreat from him, that he may be struck down and die” (2 Samuel 11:15b).

God spoke to David, and David was under great conviction. But he went one year without repenting. (Read 2 Samuel 11:26-12:13.) Some of you are in the same place—you have rationalized your sin. You stubbornly go on day after day, hoping God will forget about it.

The Cost of David’s Sin

David knew it displeased God. “O LORD, do not rebuke me in Your wrath, nor chasten me in Your hot displeasure! For Your arrows pierce me deeply, and Your hand presses me down” (Psalm 38:1-2).

What happens when a child of God sins?

If you are a child of God, the Holy Spirit will rebuke you.

God pierced David’s heart, and said, “What you did was wrong.”

In Psalm 51, David spoke poetically of his bones being broken. He is saying, “Oh God, you are crushing me!”

The most miserable man is a child of God who is out of fellowship with God. He is far more miserable than an unsaved man! When God saves you, He fixes you so that you cannot sin and enjoy it anymore. (See Hebrews 12:8.)

David’s sin wearied him. (See Psalm 38:3.) His sin is on his heart. He cannot sleep. Guilt will sap the strength out of your life—strength that ought to be given to productive purposes.

His sin weighted him. “For my iniquities have gone over my head; like a heavy burden they are too heavy for me” (Psalm 38:4).

His sin wounded him. “My wounds are foul and festering because of my foolishness” (Psalm 38:5). He is talking about spiritual gangrene. Guilt is a dirty wound—until is cleaned, it only festers.

His sin worried him. (See Psalm 38:6.) Every time David saw people talking, he wondered, “Do they know?” He had no peace.

His sin wasted him. “For my loins are full of inflammation, and there is no soundness in my flesh” (Psalm 38:7). He is not talking poetically now.

David’s sin weakened him. (See Psalm 38:8.) He used to be a mighty warrior; now he is broken in body and spirit. In the next few verses of Psalm 38, David speaks of himself as being blind, deaf, and dumb—blind to blessing, deaf to danger, no longer singing praise to God.

The Challenge to David’s Sin

Would God just let this go on? No! God sent Nathan the prophet to say to David, “Why have you despised the commandment of the LORD, to do evil in His sight?” (2 Samuel 12:9a).

We have already talked about this—rebuke, conviction, and pressure. God is not trying to get even with you. He only wants you to be corrected! “But when we are judged, we are chastened by the Lord, that we may not be condemned with the world” (1 Corinthians 11:32). God wants a change of behavior. That is all.

But suppose conviction does not work.

God will carry you to the woodshed. “For whom the LORD loves He chastens, and scourges every son whom He receives” (Hebrews 12:6). God is more concerned about your righteousness than your reputation. God will appropriately chastise you, because He loves you.

God sent Nathan to confront David. He drew a line in the sand—“David, you will not go on like this.”

For you, maybe the confrontation will come in a book. Maybe the Holy Spirit will just speak to your heart. Maybe it will come from your spouse, pastor, friend, or some circumstance. But you will know that you are on the threshold of being judged.

David’s problem was the coldness of his heart. God is calling some of you today to renew your vows to Jesus. Say, “God, I haven’t committed adultery. I haven’t killed anybody. But I don’t love you like I used to.”