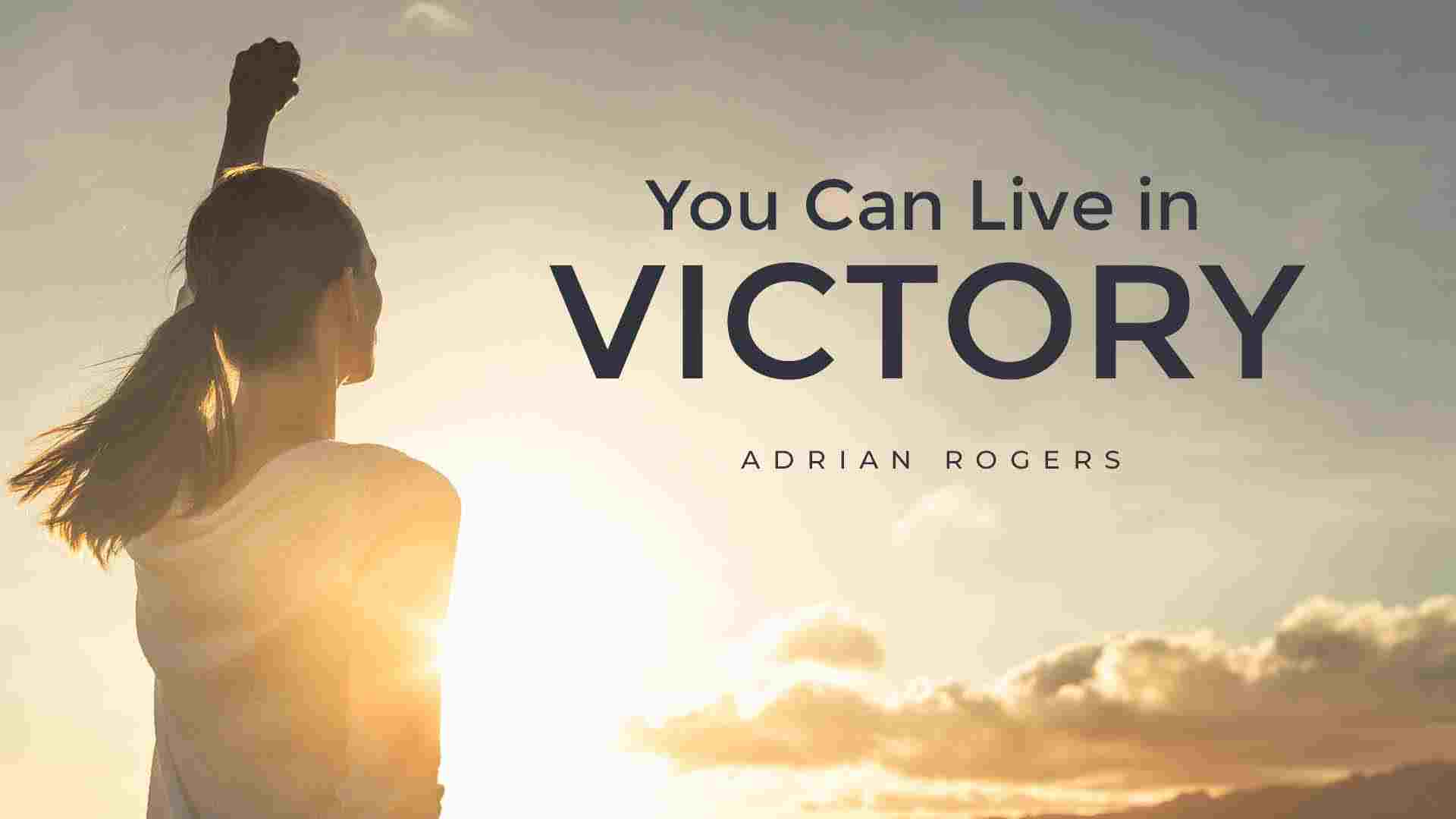 You Can Live in Victory


This article is based on Pastor Adrian Rogers' message, Four Principles of Victory.

Have you discovered yet who your biggest enemy is? I have. It is myself. What about you? Each of us has an inside enemy—inside that fort we call “Self.” Sometimes the Bible describes it as “the flesh” or the “old man”—our inner self before we accepted the Lord Jesus. It will keep us from living a life of victory every time.

The “Self,” the old man, is the opposite of the “new man”—the person we are once we receive Christ. Whatever it’s called, it’s one of three enemies we face continually:

How can we live in victory when we’re fighting these three forces? God gives us the way to overcome these enemies.

Exodus 17 tells of a time in the Old Testament when God’s people, soon after they had left Egypt, faced an enemy, the Amalekites, determined to destroy them.

Every Christian needs to understand that the Old Testament is more than history. It’s also devotional literature, and Exodus is about the Jewish nation coming out of bondage and into the Promised Land. It’s important for us because the Bible says, “Now all these things happened to them as examples, and they were written for our admonition” (1 Corinthians 10:11).

The truths of God didn’t begin and end with the Israelites’ trek to Canaan. They pertain to us as well. From Exodus 17 we’re going to learn truths for today—God’s eternal principles about fighting our enemies (the world, the flesh, and the devil) and having victory.

We’re often slaves to our flesh. Old habits and sins keep coming back, trying to enslave us again. The devil has found his entry point. He’ll say, “Let’s try this on him again—it worked so well before.”

Egypt, where God’s people were in bondage, represents today’s world system, at enmity with God. Pharaoh, ruler of this system, holding them cruelly under his thumb, represents Satan, our arch-enemy.

God called His people out of Egypt to a life of victory. We’ve been called out of that world system too. They were called to head toward Canaan, a land of abundance, representing the victory God has for all His children, not just the Israelites. Canaan represents the Spirit-filled life.

An enemy in Exodus 17 comes against them, representing the flesh—the one I have such difficulty with, and you do, too, if you’re saved. Joshua chooses his fighting men and goes out to meet them.

Moses stands atop a hill overlooking the battle, holding the rod of God—the same rod he had used in Egypt when God demonstrated His power to Pharaoh. As long as Moses held up his hand with that rod, Israel prevailed. When he lowered his hand to rest, the Amalekites prevailed. So, Aaron and Hur gave Moses a rock to sit on, and each took a hand. When that hand grew weary, they held it up. This continued till sunset—and Israel defeated the Amalekites.

You say, “Well, I’ve come out of Egypt, but I sure haven’t gone into Canaan. I’ve been dumped in the desert.” That’s not God’s will for you. God freely offers four principles—truths to bring you from failure to victory. I want you to have them. I’ve experienced these in my own life.

Before the battle, God had them set up camp in Rephidim (See Exodus 17:1.), but Rephidim is a barren, desolate place with no water! Scholars estimate anywhere from 20,000 to 2 million people came out of Egypt and were with Moses in the Sinai desert on their way to Canaan. They had to have water. They began to scold Moses and complain. Everything was his fault. Answering their outcry, God told Moses to take the elders of Israel, go to the rock in Horeb, take his same rod with which he had confounded Pharaoh, and strike the rock with it. From it would come an abundance of fresh water.

Did you ever try to get water from a rock? But water will come from this rock. It literally happened. It’s an illustration of our salvation in Christ. They “drank of that spiritual Rock that followed them, and that Rock was Christ” (1 Corinthians 10:4).

The rock pictures the Lord Jesus Christ, the Rock of Ages, described by Isaiah: “Yet we esteemed Him [regarded Him, wrongly assumed Him to have been] stricken, smitten by God, and afflicted” (Isaiah 53:4).

When on the cross the centurion pierced Jesus’ side, water came forth, representing the Holy Spirit, the water of life, in all believers. Thank God for the smitten rock.

After salvation, comes your purpose.

2. Realize God has a grand purpose—victory—for you.

God brings us out that He might bring us in. If you’re one of those who believe you’ve been simply “dumped in the desert,” realize that being saved is wonderful, but God has even more. God’s plan is not just getting His people out of Egypt’s bondage into Sinai’s wilderness, but into Canaan’s rest and abundance. No pie in the sky, but victory now.

Because of their unbelief and repeated rebellion against Him in the desert, the Israelites’ grand purpose and entry into Canaan were delayed by forty years until all of that generation died off except Joshua and Caleb.

Children born in the wilderness had never seen the mighty wonders of God or His deliverance. All they knew was wilderness. No wonder they might have asked, “Why are we out here in this desert? Why not go back to Egypt where at least there are leeks and garlic to enjoy? Forty years—we’re sick of nothing but manna.”

Manna wasn’t meant to satisfy them—only sustain them until they entered their land flowing with milk and honey. But because of their unbelief, they went round and round in the desert. Children born at that time never experienced anything but manna. They only heard stories about a Canaan to come, but their parents weren’t living in it—they weren’t living in victory.

God’s grand purpose for His people today often goes unfulfilled, and the devil is getting the children of many of our families because most people who have come out of Egypt have never gone into Canaan. They’ve never learned how to live in victory in front of their children, who know their parents are sincere but have simply missed it.

Amalek was a real person (Exodus 17:8) and a sworn enemy of the Israelites. This feud went back long before they were in Egypt. When they came out, the Amalekites were waiting. Amalek was the descendent of Esau, Jacob’s brother. A profane man (See Hebrews 12:16.), Esau had sold his birthright to Jacob for only a bowl of stew, spurning his inheritance from God.

Malachi 1:1-4 says God has perpetual warfare with Esau, meaning the Edomites descended from him—not just the people in physical bodies, but the principle—the flesh. Amalek represents our flesh, our enemy. Friend, there’s an Amalek in us all. Scripture confirms it:

“To be carnally [fleshly] minded is death, but to be spiritually minded is life and peace, because the carnal mind is enmity against God, for it is not subject to the law of God, neither indeed can be” (Romans 8:6-7).

As soon as you drink of that living water from the Rock, the flesh comes against you, just as Amalek did in Exodus 17:8. The flesh attacks at our weakest point, saying, “You’re going no further. You’re not getting into Canaan.”

How can we have victory over that internal, day-by-day enemy? The fourth principle:

4. Remember the victory God has given—and implement it.

Just as Aaron and Hur upheld Moses’s arms during the battle, so our victory is God-given, and we can’t do it without Him. Warfare with our flesh is a battle we all face. When we get saved, our flesh isn’t eradicated. How will I overcome the “old Adrian,” my flesh? By rededicating my life? Struggling? No! The answer is Galatians 5:16: “Walk in the Spirit and you will not fulfill the lusts of your flesh.”

You must come to the place where you’re willing to be led by the Spirit and walk in Him by an act of your will. God wants to make this simple to understand, so He uses the metaphor of walking.

The victorious life isn’t lived by willpower. It’s lived by the Holy Spirit’s power. But you enter it by an act of your will. You decide, “I will be led of the Spirit.”

You keep on walking.

Your “I will” is followed by a process. You keep walking forward, following the Spirit’s lead.

That’s the only way that you’re going to come out of Egypt, through the wilderness, into Canaan. There’s a battle you will have to get in, but the battle is the Lord’s. The victory that is won on the mountain is realized in the valley.

You’ve received God’s provision of salvation. You remember God’s purpose, entering Canaan. You recognize that problem, the flesh. But then you believe a principle: if we walk in the Spirit, we’ll not fulfill the lusts of the flesh.

God, help us to understand it and moment by moment, day by day, walk in the Spirit and not fulfill the lusts of the flesh.

If you’re sick and tired of Egypt and Pharaoh telling you how high to jump, of being beaten up by the devil, and want to come out of Egypt into liberty and victory, if you’re thirsty and need a drink from the Rock, His name is Jesus.