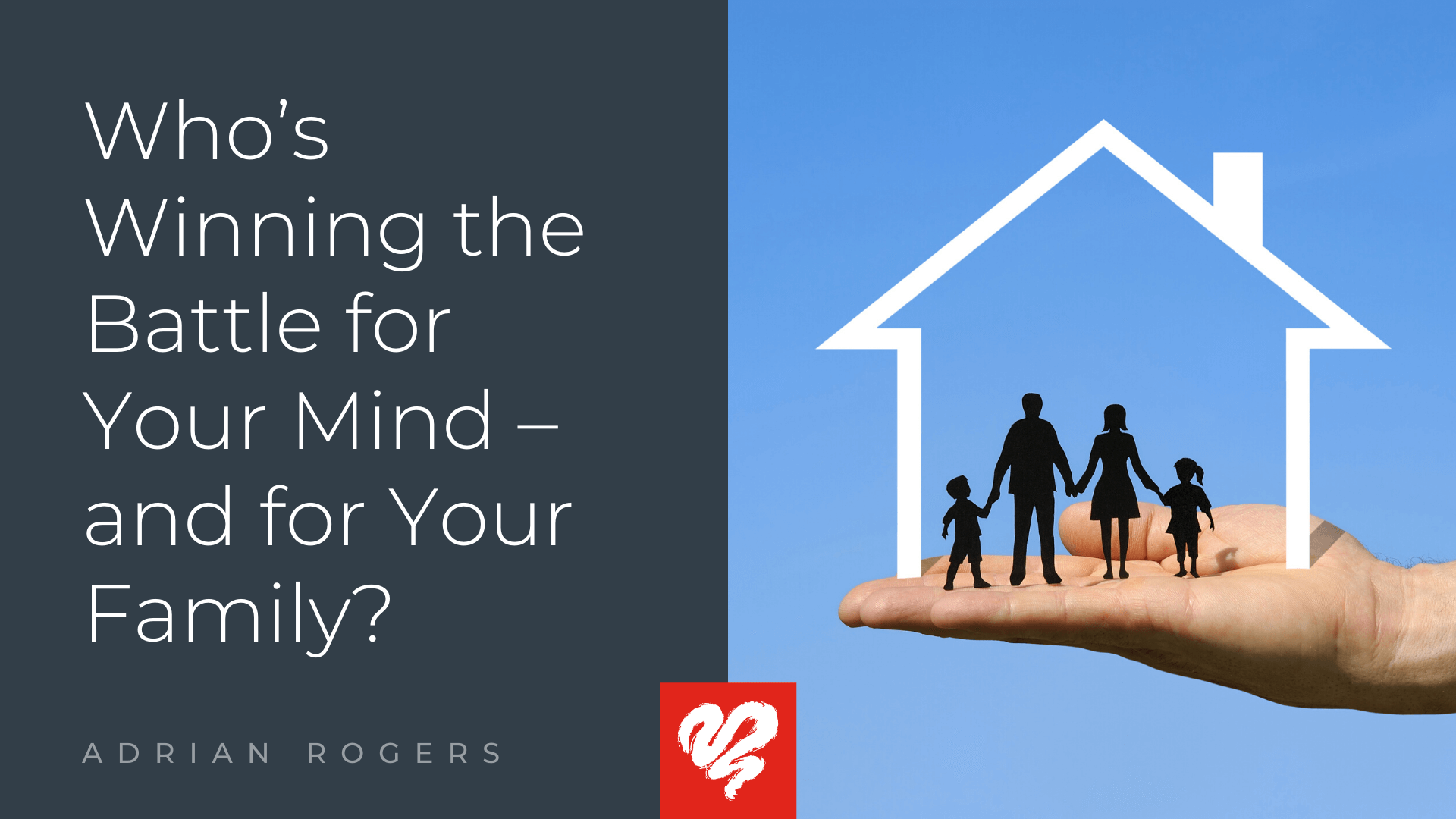 Who’s Winning the Battle for Your Mind—and for Your Family?

What God says about men and women, the home, families, and even established biology has been, of late, stood upside down on its head. In recent years we’ve seen institutions we thought were trustworthy suddenly change on a dime and abandon biblical principles that have stood the test of thousands of years.

We thought we’d never see our local schools, universities, legislatures and even some churches make concerted efforts to change what we believe, control what we think, and restrict what we’re free to say and do.

As Christians, this new reality is mind-bending, and it presents a serious challenge.

In the United States, at least, historically we’ve had the First Amendment in our Constitution standing guard over our rights, protecting our freedoms of speech and religion. Christians in other nations without these protections find themselves vulnerable to persecution—even arrest and imprisonment—simply for standing firm on what the Bible teaches.

Governments cannot force people to think a certain way, but they can undermine and change people’s beliefs through education, legislation, and propaganda (known as “spin”).

Some think if we could just properly educate everyone, we’ll improve civilization and elevate it to where it should be. That’s not what’s wrong with man, and it’s not where the battle for the mind will be won. I’m not against education, but if you take a man who does not know the Lord Jesus Christ and educate him, what have you done? You’ve just made him more dangerous. He becomes a more clever devil.

A friend of mine, before he met Christ, was an alcoholic. He went to various courses for alcohol abuse. After he’d met the Lord Jesus Christ he said, “Let me tell you what those courses did for me without Jesus. I went in a dumb drunk. I came out an educated alcoholic.” Education without knowing Jesus Christ is not the answer.

Governments will try legislation to make man a “better creature”—their version of better. The latest example is hate crimes legislation. But do you believe laws are going to control men’s thought processes? “We’re going to punish crimes as a ‘hate crimes’!” they proclaim. Well, I sure hope if a man kills me, he doesn’t hate me in the process. Think about it: all crimes against a person are hate crimes.

But we think laws somehow will make people love one another and keep them from hating one another. Laws on the books can’t do that. Legislation can only restrain evil; it cannot make people good. Neither education nor legislation is the answer.

We’re now in a time where some governments are determined to control what we think and believe. In nations oppressed by false religions, cruel dynasties of dictators, or of late, Communism, this has been true for centuries. But it’s a new twist for believers in the United States.

What’s behind all this—the anger, deception, manipulation, and division? Where did it suddenly come from? Who’s behind it? First, it’s not sudden. And “who is behind it” is our arch-enemy, Satan.

First, let’s clearly understand who Satan is not: Satan is not the product of someone’s over-active imagination. He’s not a cartoon character in a red suit, holding a pitchfork. He’s not a convenient tool for fiction writers.

Satan is an ancient being. He is our arch-enemy. He is exceedingly experienced, diabolically clever, and strategically brilliant. Martin Luther described him well:

But still our ancient foe doth seek to work us woe.

His craft and power are great, and armed with cruel hate.

On earth is not his equal.

Whatever your circumstances, whatever government you live under, you and every other person on earth face a common enemy, Satan. He is the unseen power determined to deceive the entire world in a life-and-death struggle to control our minds. This is true of people as different as the prime minister of Turkey, the Pope, the patrolman on the beat, the peasant in the rice paddy, and the preacher in your pulpit. Satan targets everyone.

With some, he’s more successful than others. He is neither omnipresent nor omniscient, and he cannot read your thoughts, but his minions—the fallen angels cast out of Heaven with him—serve in every corner of the globe. And if he can catch believers in Christ in his dark web, he’s going to try.

Who wins the battle for our minds will determine the worldview controlling our thoughts, and thus our choices, and ultimately our actions because what we truly believe, we act upon. It’s a deadly war. The Apostle Paul called it warfare (2 Corinthians 10:3-4, Galatians 5:17, Ephesians 6:12).

This battle isn’t recent. It began in the Garden of Eden when Satan tricked Adam and Eve into doubting that God was truthful, trustworthy, and just. Satan’s never changed his strategy. The apostle Paul’s 2000-year-old warning is just as vital today:

For though we walk in the flesh, we do not war after the flesh: For the weapons of our warfare are not carnal, but mighty through God to the pulling down of strongholds; Casting down imaginations, and every high thing that exalteth itself against the knowledge of God, and bringing into captivity every thought to the obedience of Christ. 2 Corinthians 10:3-5

Satan has expanded his work, creating new chaos, such as:

Apart from worldwide repentance and a third “Great Awakening,” man will continue to rebel against God’s revealed will:

Many tear their hair and rightly ask: “Where is common sense? Where is reason?”

I must ask: When will we learn? Our battle is not with Democrats, Republicans, Communism, Hollywood, or even with false religions. Friend, at the bottom of this struggle for our homes, for our hearts, for our minds is first, sin—rebellion against God’s revealed will—and second, our ancient foe, the devil himself. You cannot outwit, outwork, or out-war the devil. He mocks our schemes, he ridicules our organization.

The only answer for man’s faulty thinking, for man’s rebellion against God, is a renewed mind. “As a man thinketh in his heart, so is he” (Proverbs 23:7). The “heart” is the seat of our emotions. Emotions are triggered by our thoughts; thoughts originate in our minds—it’s all connected.

Out of the heart are the issues of life (Proverbs4:23). The devil wants our minds. In the weakness of our flesh, we do not have what it takes to overcome. But Paul tells us that God has given us the weapons we need to win this battle. They’re not, however, carnal, man-made weapons. The weapons God gives are “…mighty through God to the pulling down of strongholds” (2 Cor. 10:4).

Paul put the entrenched evil in the Roman Empire down for the count of ten, saying “I’m coming against this citadel, this stronghold.”

God’s Word says, “Casting down every high thing.” A stronghold, a citadel, is a fortress with high towers all around it. Inside that stronghold are organized, mobilized, demonized armies of hell. When God’s weapons come against them, demons will be routed. Walls of resistance—arrogance, ignorance, despair, unbelief—are going to come down.

“I’m pulling down these walls. I’m going to get at those on the inside, and I’m going to decimate your towers, your high-minded attitudes, your sophistication. That’s coming down.

“Inside, there are some captives. I’m going to bring into captivity every thought. Thoughts being held hostage are going to be set free from habits and fears, obsessions and lusts. I’m tearing down walls. Towers are coming down, wrong thoughts are coming out! I’m going to war!” What a war!

What gives us, the believer in Christ, the authority to take these things captive? Jesus Christ! He’s won the war! Authority is the legal right to act on behalf of another. He’s given us power of attorney. In Matthew 28:18-19, Jesus told His disciples, “All power [authority] is given unto Me in heaven and in earth. Go ye therefore…”

Remember when young David, with a slingshot and God, came against Goliath? Do you remember what David said?

Then said David to the Philistine, “Thou comest to me with a sword, and with a spear, and with a shield: but I come to thee in the name of the Lord of hosts, the God of the armies of Israel, whom thou hast defied. 1 Samuel 17:45

When you come in someone’s name, you come with their authority. I’d rather have a slingshot and God than the sword of Goliath. We have authority. Jesus said, “Behold, I give unto you power to tread on serpents and scorpions, and overall the power of the enemy” (Luke 10:19). In verse 20, He says the spirits (demons) are subject to the believer. Jesus has given us that authority.

As you think, you will be.

You are the gatekeeper. God has given you, not your child, the authority and responsibility to control what comes into your home.

The devil cannot win unless you let him. Let nothing take away your pure-hearted devotion to the Lord Jesus Christ. Stay in love with Him, use the weapons He has given, and your battle will be won.

The Battle of the Bottle Booklet