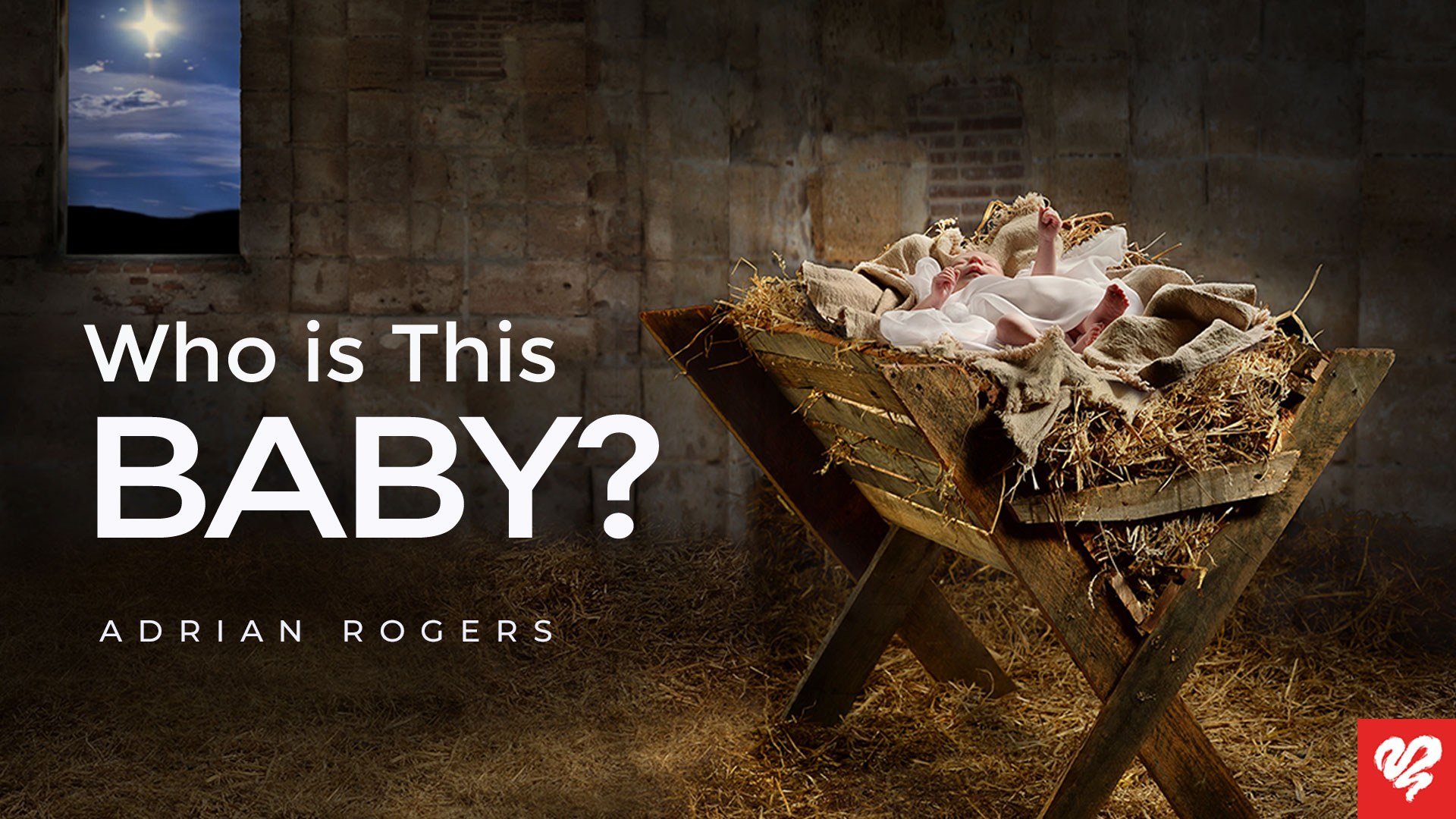 Who Is This Baby?


This article is based on Pastor Adrian Rogers' message, Jesus Christ: The Son of God and God the Son.

We know about Gabriel’s announcement to the Virgin Mary that she would give birth to Israel’s long-anticipated Messiah. But have you ever considered that all three persons of the Trinity, God the Father, God the Son, and God the Holy Spirit, are present in Luke 1:35 when Gabriel foretells Jesus’ birth?

And the angel answered and said to her, The Holy Spirit [God the Holy Spirit] will come upon you, and the power of the Highest [God the Father] will overshadow you; therefore, also, that Holy One who is to be born will be called the Son of God. (Luke 1:35)

Who is this baby? Who is Jesus Christ? There’s only one right answer. Sadly, there are many wrong answers. For example,

Some wrong answers may sound good on the surface.

H.G. Wells, noted historian of the last century who wrote Outlines of History, listed the ten greatest men of all history, and Jesus Christ was number one on his list.

Some want to view Jesus as only a great moral teacher, rejecting His claim to be God. But C.S. Lewis answers that error:

I am trying here to prevent anyone from saying the really foolish thing that people say about Him: “I’m ready to accept Jesus Christ as a great moral teacher, but I don’t accept His claim to be God.”

That is the one thing we must not say. A man who was merely a man and said the sort of things that Jesus said would not be a great moral teacher. He would be either a lunatic, on the level of a man who says he’s a poached egg, or else he would be the devil of hell.

You must make your choice. Either this man was and is the Son of God or else a madman or something worse.

You can shut Him up for a fool. You can spit at Him and kill Him as a demon. Or, you can fall at His feet and call Him Lord and God. But let none of us come away with any patronizing nonsense about His being a great human teacher. He has not left that open to us.

Jesus in the Old Testament

Jesus Christ doesn’t belong on H. G. Wells’ Top Ten list or anyone else’s. He is unique. You’ve heard about Peter the Great, Alexander the Great, and Charlemagne the Great, but Jesus, God the Son, is the One and Only. Following are some places Jesus appears in the Old Testament.

In Daniel 3:25, the story of Shadrach, Meshach, and Abednego in the fiery furnace, King Nebuchadnezzar exclaims, “I see four men…and the form of the fourth is like the Son of God.” Before His incarnation in Bethlehem, Jesus comes alongside these three in the furnace.

In Psalm 2:6-7, God the Father says, “Yet I have set My King on My holy hill of Zion. I will declare the decree: [Jesus is speaking now] The Lord has said to Me, ‘You are My Son, Today I have begotten You.”

In Isaiah 9:6, a classic Christmas passage, the prophet says of Jesus, “For unto us a Child is born, unto us a Son is given; and the government will be upon His shoulder. And His name will be called Wonderful, Counselor, Mighty God, Everlasting Father, Prince of Peace.”

The Mighty God, literally translated, is “the God-Man.” Don’t let anyone tell you that the one spoken of in Isaiah 9:6 is any less than God Himself.

In Proverbs 30:4, the writer asks, “Who has established all the ends of the earth? What is His name, and what is His Son’s name, if you know?”

I know. His name is Jesus. The Bible speaks of Him in the present tense because he already existed before the creation of the world. He is the Second Person of the Trinity, the Eternal, Self-Existent Jehovah.

In Exodus 3:14, Jehovah God reveals His name to Moses: “And God said to Moses, I AM that I AM”—translated “Yaweh”—Israel’s most sacred name for God. “Yaweh” doesn’t mean “I was.” It doesn’t mean “I will be.” It means “I AM, the self-existent God.”

Jesus as God in the New Testament

Jesus says the same thing of Himself in John chapter 8 that Moses heard in Exodus 3:14. Trying to discredit Jesus, the Pharisees demanded His credentials. In a back-handed way. They were saying, “We don’t even know who your father is. Your mother wasn’t married when you were born.” Here’s how Jesus answered them:

“Your father Abraham rejoiced to see My day, and he saw it and was glad.” Then the Jews said to Him, “You are not yet fifty years old, and have you seen Abraham?” Jesus said to them, “Most assuredly, I say to you, before Abraham was, I AM.” (John 8:56-58)

“I AM” (Yaweh) is Israel’s covenant name for God. That’s why they picked up stones to kill Him. They knew exactly what He was saying. To them it was blasphemy. His words eliminate any possibility that Jesus had a beginning.

Before the stars were set in space, before His incarnation as Jesus of Nazareth, the Second Person of the Trinity already existed.

Even the place of Jesus’ birth was a fulfillment of prophecy from centuries earlier. Matthew 2:3-6 quotes Micah 5:2, where the prophet said,

But you, Bethlehem Ephrathah, though you are little among the thousands of Judah, yet out of you shall come forth to Me the One to be Ruler in Israel, whose goings forth are from of old, from everlasting [the days of eternity].”

Bethlehem’s child is not just the “sweet little Jesus” people get sentimental about at Christmastime. Higher than the angels, He is God the Son. That’s why the book of Hebrews asks,

Moreover, the Bible is clear: God is the only one to be worshipped. Yet it says Jesus is to be worshipped:
“But when He [God the Father] again brings the firstborn [Jesus] into the world, He says: ‘Let all the angels of God worship Him’” (Hebrews 1:6).

We must understand that God is one in essence but also three distinct Persons.

The Sublime Mystery of the Trinity

Can you understand a God who never had a beginning? Who is everywhere at the same time? Who contradicts logic? Yet it’s true! Do you understand infinity? Eternity? Of course not. Our lack of understanding doesn’t matter. The doctrine of the Trinity rises or falls on divine revelation.

You’ll never know about God’s Triune personhood by human investigation, logic, philosophy, or science. Divine revelation, what God says in His Word, is the only way.

Reflections of the Trinity are everywhere. For example, time and space. Time is past, present, and future. The past is not the present, the present is not the future, and the future’s not the past. All three are distinguishable and inseparable—a trinity. You can’t have one without the other. Space is height, width, and depth, all distinguishable but inseparable. Man is body, soul, and spirit, yet one person.

Be glad the Trinity doesn’t make sense to you. We don’t want a God we can understand. God is one, but that one God is triune.

A wise man once said, “Try to explain the Trinity, you’ll lose your mind; deny it, you may lose your soul.” We believe it because the Bible teaches it. Einstein said that before he died, he wanted to understand electricity. He never did. Vance Havner said, “I don’t understand it either, but I’m not going to sit in the dark until I do.”

The Sacred History of the Trinity

Present in creation:
Genesis 1:1 says, “In the beginning Elohim [plural] created the Heaven and the earth,” but John 1:1-3 says God the Son did. Job 26:13 says creation was by His Spirit.

There’s no contradiction. God the Father, Son, and Holy Spirit made it, one God revealing Himself in creation.

Present in giving us the Bible:
Second Timothy 3:16 says the Bible was inspired by God the Father. Second Peter 1:21 says it was the Holy Spirit, and First Peter 1:10-11 says the Son also wrote it—the Trinity in giving the Scripture.

Present in the Great Commission:
“… baptizing them in the name of the Father, and of the Son, and of the Holy Spirit…” (Matthew 28:19).

We’re saved through all three persons of the Trinity.

The Trinity works together in your salvation. If you don’t believe in the Trinity, you have no Christianity.

Who is this baby? Enough of “baby in the manger,” “Jesus, great moral teacher,” or “Jesus, a great man.” The Son of God is God the Son. It’s one thing to have an intellectual belief. It’s another to give your heart to Christ, knowing He is the Incarnation of God, God manifest in the flesh.

We aren’t worthy of such love, but He died for us. And if by faith you will receive Him as Lord and Savior, give your heart to Him, trust Him, I promise you on the authority of the Word of God, He will forgive every sin and cleanse you. The Holy Spirit will seal you to the day of redemption.

Jesus loves you and wants to save you. With His own blood, Jesus, the Son of God, who is God the Son, purchased your salvation.

This is the “why” of Christmas. He came to save us. We have redemption through Him. It is the sheer gift of God’s grace.