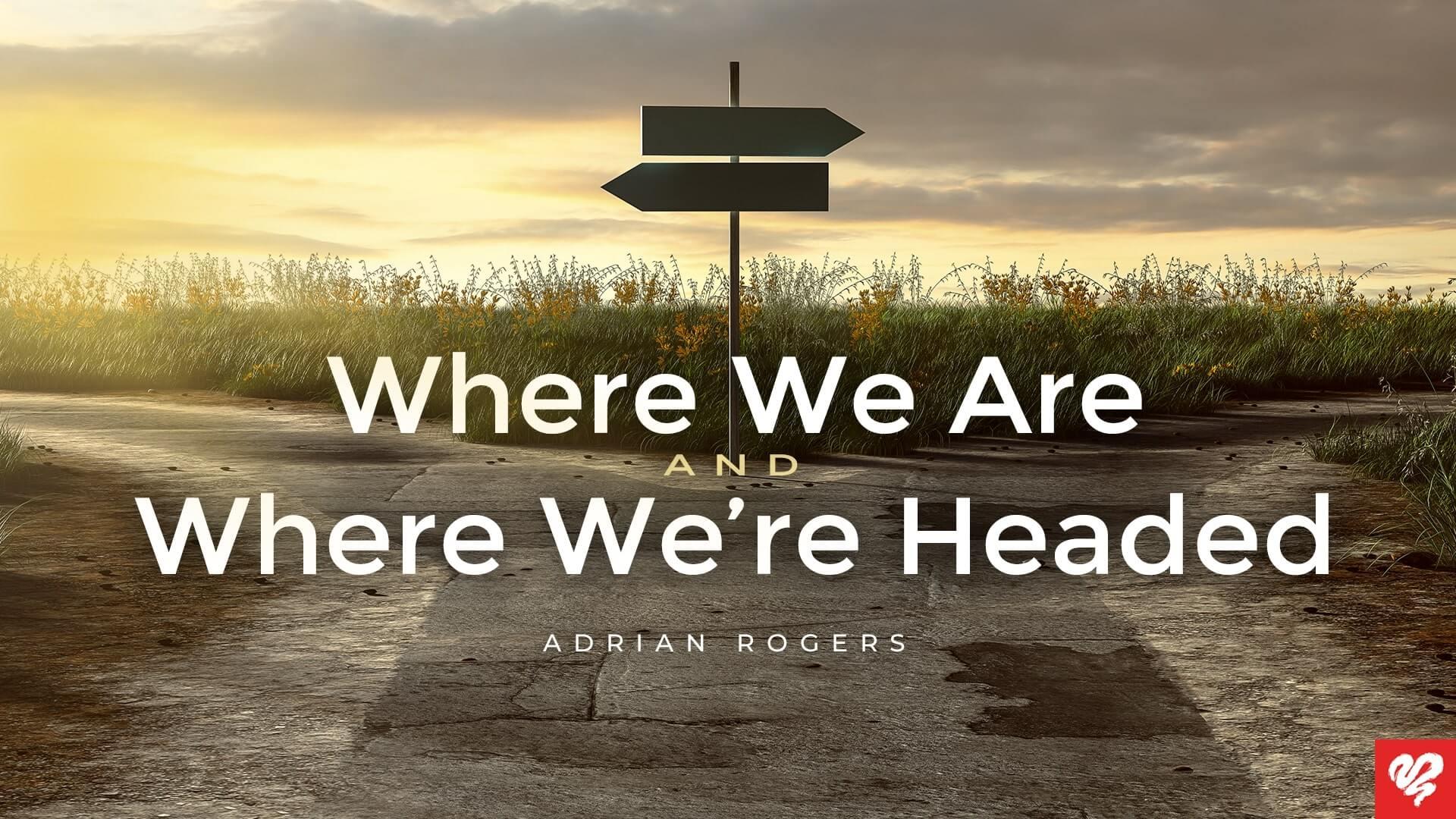 Where We Are and Where We're Headed


This article is based on Pastor Adrian Rogers' message, The Lost World.

First the good news: the Gospel of Jesus Christ tells us we can be saved and spend eternity in Heaven by receiving God’s free gift of salvation. The bad news? Our world is hopelessly lost, on a collision course headed toward judgment. You don’t have to be a genius to figure that out. Just look around. Not only have we reached the bottom of the garbage pail—we’ve eaten right through the pail. We’re going to look at the bad news that makes the good news good.

The book of Romans has been rightly called the “Constitution of Christianity.” It’s an incredible book. In it, God tells us where we are, how we got here, and where we’re headed. Where we are is a sick place, laughing our way to Hell while crime soars, families are destroyed, millions of babies are killed in their mothers’ wombs, and suicide and violent crime are the leading causes of death for young people. In all this, we’re labeled intolerant if we call anyone a sinner.

We’re guilty, ready for judgment. Romans chapter one is like a great courtroom. Almighty God is the Chief Justice. The Apostle Paul, the prosecuting attorney, will show beyond a reasonable doubt that our lost world is without excuse. The sentence to be pronounced is called “the wrath of God.”

We’re told, “God is a God of love, so He can’t be a God of wrath.” He is a God of infinite, measureless, fathomless love. But that’s only part of the truth. If you take part-truth and say it’s all of the truth, that part-truth becomes an untruth. God is also righteous and holy, a God of judgment and wrath.

"For the wrath of God is revealed from heaven against all ungodliness and unrighteousness of men, who suppress the truth [literally, smother the truth] in unrighteousness…" (Romans 1:18).

Paul will show three reasons why the wrath of God is falling, and we’re on a collision course with judgment. These are the steps in mankind's three-fold descent to Hell.

"…what may be known of God is manifest in them, for God has shown it to them. For since the creation of the world, His invisible attributes are clearly seen, being understood by the things that are made, even His eternal power and Godhead, so that they are without excuse."

Paul is primarily talking about people who’ve never heard the Word of God. They won’t be excused on the basis of ignorance, genetics, or environment, because God’s existence “is clearly seen.” Verse 19 explains how that occurs: “what may be known of God is manifest in them and shown to them.

His truth is revealed.

That inner witness everyone has is called “conscience.” Williams’ translation says, “God’s existence is clear to their inner moral sense.”

Every time someone says he’s an atheist, he’s lying. How can we say that? Because God says, “Christ is the true Light which gives light to every man coming into the world” (John 1:9). It’s absolutely clear to everyone that God exists. Those who say they don’t believe it are lying. God has shown His existence to them through two witnesses (v.19):

The blazing stars, this universe—how did it happen? Everyone knows that out of nothing, nothing comes. An atheist has to believe that nothing times no one equals everything. That’s not intelligence. God has set His witness in the sky.

The heavens declare the glory of God, and the firmament shows His handiwork. Day unto day utters speech, and night unto night reveals knowledge. There is no speech nor language where their voice is not heard. Their line has gone out through all the earth and their words to the end of the world. (Psalm 19:1-4)

When you look up at the outer witness, an inner witness responds, “That didn’t just happen.”

But His truth is resisted.

Romans 1:18 says the unrighteousness of man opposes His revelation of truth and actually suppresses (literally, “smothers”) the truth. Other translations say: “hold back,” “repress,” “stifle” the truth. It’s not that atheists cannot believe; they will not believe. The problem isn’t the head—it’s the heart. They say “I’ll have my own way.”

Choosing to disbelieve God, you fall into self-deception.

You can see “…His eternal power and Godhead, so that they are without excuse, because, although they knew God, they did not glorify Him as God, nor were thankful, but became futile in their thoughts, and their foolish hearts were darkened” (Romans 1:20-21).

Truth is given to inspire worship and thankfulness. If you don’t glorify Him and aren’t thankful, you’ll lose what truth you have.

Romans 1:22 says, “Professing to be wise, they became fools...” They think they see perfectly—and we who believe are the fools.

Sadly, because nature abhors a vacuum when you don’t believe in the true God, it doesn’t mean you’ll believe in nothing—you’ll believe anything. It’s amazing what people will believe. We’ve seen it happen in our nation. Until 1962, we more or less had a moral consensus about right and wrong. Then the Supreme Court outlawed the right of children to pray openly in public schools. From then on, America began a downhill slide.

Romans 1:23 notes those who “…changed the glory of the incorruptible God into an image made like corruptible man—and birds and four-footed animals and creeping things.”

First, they want to glorify man, making man the center of everything. Second, they will actually worship animals and bugs. If you doubt it, look at Egypt, where they worshiped the scarab, the carving of a bug. There’s not a sadder verse in the Bible—people actually worshipping bugs and creeping things. Look at other cultures where their demon gods take the forms of animals. A glorious, incorruptible God dwells above in pure light, but man, made in His image, worships bugs. Man’s selfish indifference leads to sophisticated ignorance and finally to shameful idolatry.

An idol is anything you love, fear, serve, or value more than God. We’re “lovers of pleasures more than lovers of God” (2 Timothy 3:4), exchanging the glory of Almighty God for heathen idolatry.

Man is so wicked, he takes his worst vices of war, greed, lust, and pride and makes gods out of them. Heathen idols are always grotesque with their fat Buddhas and maniacal faces. Then he worships his vices by participating in them. The sinner molds the idol, then the idol molds the sinner.

One way America got into this mess was through the horrific sin of child murder:

When we kicked God out of our public schools in 1962, we created a vacuum. Eastern religions and other things flooded into America so that we are worshiping the creation and killing our unborn.

The third step in our three-fold step into Hell is our woeful self-destruction.

Our lost world is not a pretty picture. You don’t have to wonder how God looks at it. Romans 1:26-27 describes the perverted, unnatural sins of Sodom as uncleanness (v.24), lust, and dishonor.

For this reason, God gave them up to vile passions. For even their women exchanged the natural use for what is against nature. Likewise also the men, leaving the natural use of the woman, burned in their lust for one another, men with men committing what is shameful, and receiving in themselves the penalty of their error which was due.

This is God’s assessment of sexual perversion, same-sex relationships: “Vile passions, against nature, shameful.” How does a nation self-destruct? Again, God gives us the progression:

This always happens as a culture disintegrates: sexual perversion, men with men. How does God feel about that? You don’t have to guess. “You shall not lie with a male as with a woman. It is an abomination” (Leviticus 18:22).

The judgment of God is smoldering against this sin. When Jesus Christ answered a question in Luke 17 about what the world would be like in the days just before His return in judgment, He specifically referred to Sodom’s sin (see Luke 17:22-29), saying they would be days marked by a revival of sodomy, when God destroyed them all.

The only thing we learn from history is we don’t learn anything from history. May God have mercy on this nation. What used to be called sin then became “sickness.” Now it’s socially acceptable. But God’s Word is so clear.

He again describes our sins in Ezekiel 16:48-50 and Isaiah 3:8-9. We reek with pride and sexual perversion because we turned from God, who left Sodom with its smoking ruins “as an example to those that should after live ungodly” (2 Peter 2:6).

It’s the sin of adultery and fornication as well. Pornography rakes in yearly more than $15 billion in America. We’re sexually sick.

My heart bleeds that many in this world will never know what God intended: one man for one woman till death do them part, a wonderful, monogamous marriage.

…God gave them over to a debased mind, to do those things which are not fitting; being filled with all unrighteousness, sexual immorality, wickedness, covetousness, maliciousness; full of envy, murder, strife, deceit, evil-mindedness; they are whisperers, backbiters, haters of God, violent, proud, boasters, inventors of evil things, disobedient to parents, undiscerning, untrustworthy, unloving, unforgiving, unmerciful… (Romans 1:28-31)

They know the judgment of God but they don’t care. They strut right into Hell.

God put a firewall around America. He blessed and hedged us about. How long will it be before God gives up on America if He hasn’t already? The worst thing He could do to America would be to say, “Okay, it’s yours,” and leave us alone in our sin. (See Hosea 4:17.)

Yes. The bad news makes the good news good. The good news is “…the gospel of Christ, for it is the power of God to salvation for everyone who believes…” (Romans 1:16).

You can have every sin forgiven. God the Holy Spirit can come to live in your heart and give you peace, power, and purpose. You can know beyond any doubt, when you die or when Jesus comes, you’re going straight to Heaven. I invite you to come to Him.

If you want to know how to start your relationship with Jesus, find help here.

The Lost World Outline and Transcript