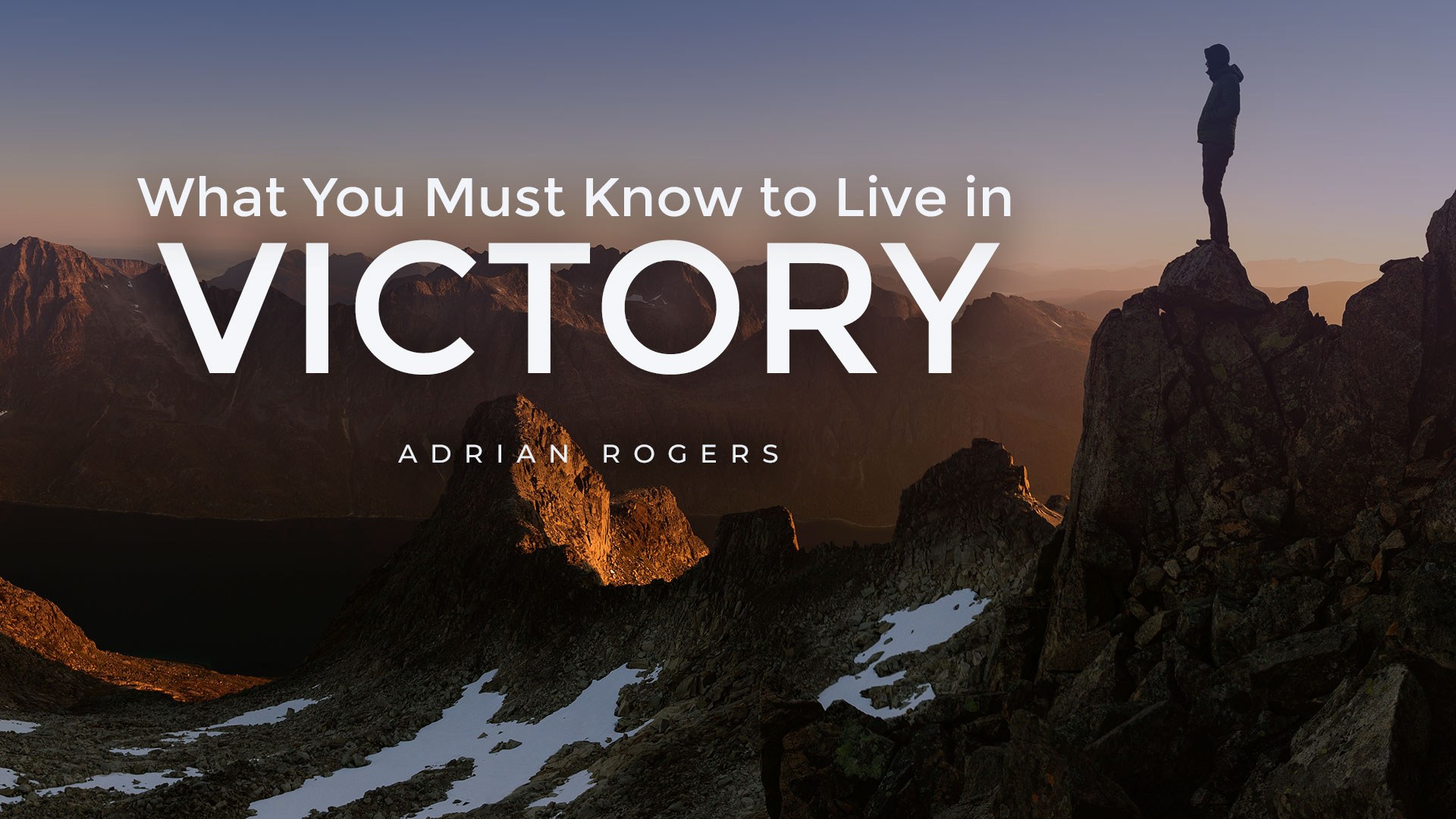 What You Must Know to Live in Victory

When Jesus left the glory of Heaven and came to live here among us, His first priority was to pay the price for our redemption. He said it Himself: “For the Son of Man has come to seek and to save that which was lost” (Luke 19:10). But victory was something else He provided, and to set that straight, He fixed a certain legal transaction that can be traced back almost to the beginning of time.

The zenith of God’s creation in Genesis 1-2 was His forming man in His own image and commissioning him to be caretaker and keeper in the Garden. Adam and Eve were to rule and reign there. God sovereignly established Adam’s dominion.

But when Adam and Eve thought they had a better plan and rejected God’s authority, their dominion was legally lost—lost to Satan—until a Savior could come and righteously restore what they had transferred to the devil. No victory is possible without reestablishing Adam’s dominion. That’s the transaction that needed fixing.

When Jesus began His public ministry, He stood in His hometown synagogue to read from the scroll of Isaiah (61:1-2) and announce clearly why He had come: “…to preach the gospel to the poor; He has sent Me to heal the brokenhearted, to proclaim liberty to the captives, recovery of sight to the blind, to set at liberty those who are oppressed; to proclaim the acceptable year of the Lord” (Luke 4:18-19).

Clearly, Jesus came to set things right again, including recovering the dominion Adam lost to Satan. True to His own righteousness and character, God didn’t just snatch that authority back from Satan, kill him, and hand it back to Adam. It had been lost by a man, the first Adam, and it would be regained by a Man, the second Adam—the Lord Jesus.

In His life and death, His ministry and sacrifice on the cross, Jesus delivered us from the bondage of Satan, and we can live in victory.

“And you, being dead in your trespasses…He has made alive” (Colossians 2:13).

If you’ve not been born again by faith in Jesus Christ, spiritually you’re dead. Not spiritually sick—dead! But when Jesus came, through His death He gave us life and delivered us from spiritual death.

We were drowning in spiritual debt.

We owed a debt we couldn’t pay. That’s why Jesus came—to wipe out, “…the handwriting of requirements [certificate of debt] that was against us…and He has taken it out of the way, having nailed it to the cross” (Colossians 2:14).

In Bible times, a civil magistrate would write up the charges against a criminal, and it was called a “certificate of debt.” If the criminal was found guilty, that certificate was nailed to his prison door. Everyone could see his penalty. When he’d served his time, the judge would write one word across the certificate: tetelestai—“finished, paid in full” —then give the man his certificate, proof he had paid.

After Adam’s fall, we’re all sinners by nature. Each of us has a certificate of debt against us.

Satan, the accuser, comes and whispers, “You’re not good enough. You don’t deserve it. Your sins haven’t been forgiven.” He says to God the Father, “You claim to be righteous. Adrian is a sinner. If You’re righteous, You’ll fling him into Hell.” That’s when my Advocate—my Lawyer—steps forward and says, “Yes, Adrian sinned, but for those sins, I died. Here’s the certificate of debt, signed in My crimson blood, paid in full.”

Friend, the devil continually accuses you to your face. Next time, wave your certificate in his face, saying, “Jesus paid it all, nailed it to His cross. He wiped out the certificate of debt against me.”

“Who shall bring a charge against God’s elect? It is God who justifies” (Romans 8:33).

We were bound by Satan’s dominion. But Jesus defeated him through the cross.

We fight Satan on another front as well.

“For we do not wrestle against flesh and blood, but against principalities, against powers, against the rulers of the darkness of this age, against spiritual hosts of wickedness in the heavenly places” (Ephesians 6:12).

Who are these “principalities and powers”? Spiritual rulers and authorities, powers of darkness, supernatural forces of evil, ranks of hostile angelic beings operating against us.

But remember what Jesus did to Satan and his forces.

He made a public spectacle of them.

“…having disarmed principalities and powers, He made a public spectacle of them, triumphing over them in it” (Colossians 2:15).

Jesus didn’t only pay your debt in full. He also humiliated Satan and all in his dark kingdom, stripping them of their powers like you would the medals from a general.

He triumphed over Satan.

Here’s Satan in his arrogance, wearing all his medals from Hell, and on the cross the Lord Jesus Christ strips it all away, saying, “Your authority is destroyed. You’re shamed and subdued. You rule a doomed domain. You sail a sinking ship.”

No more power or dominion, shamed and made a show of. Next time you think about Satan, think: shamed, subdued by the cross.

That’s the message we must learn. God has given us kingdom authority. Victory is not our destination; it’s our point of origin. We don’t pray for victory; we pray from victory. We already have it. We stand in victory.

In the last words Jesus uttered on Earth before His ascension to Heaven, He gave us a commission:

“All authority has been given to Me in Heaven and on earth. Go therefore and make disciples of all the nations, baptizing them in the name of the Father and of the Son and of the Holy Spirit, teaching them to observe all things that I have commanded you; and lo, I am with you always, even to the end of the age” (Matthew 28:18-20).

He gave us kingdom authority!

We often fight the wrong enemy.

Ultimately, our battle is not with Washington, the White House, or Hollywood. They may be tools the enemy uses, but they are not our target. They’re flesh and blood. We’re not wrestling against them, “but against principalities and powers and spiritual wickedness in high places” (Ephesians 6:12). Remember this!

Jesus knew who the real enemy is. We’re in spiritual warfare. We must learn to exercise our spiritual authority.

You may be thinking, “But if Satan has been stripped, shamed, and subdued, if it’s done, why do we need to engage in this warfare?”

Because, although Satan’s defeat is absolute, it must be appropriated.

Think of it this way:

Be walking in fellowship with the Lord.

Don’t just sally forth against the devil if your heart is not clean and right with God. Even as God’s child, if you dare to come against Satan with the heart of a rebel, you’ll be in serious trouble. You must be in a personal relationship with God.

As a warning, read Acts chapter 19, where seven men learned that the hard way. Claiming they could cast out demons when they didn’t personally know the Lord, they came upon a demon-possessed man and commanded, “In the name of Jesus whom Paul preaches, come out of him.” He turned on them, stripped their clothes off, began to beat them, and they fled, wounded and naked. One demon-possessed man put seven to flight.

You can’t take authority over the devil when you don’t know Jesus personally. Secondhand religion won’t do. It had better be in the name of Jesus whom you know personally.

Understand your position with the Lord.

What is your position?

“The Father…has qualified us to be partakers of the inheritance of the saints in the light. He has delivered us from the power of darkness and conveyed us into the kingdom of the Son of His love, in whom we have redemption through His blood, the forgiveness of sins” (Colossians 1:12-14).

We’re seated with Jesus in the heavenlies.

“…Even when we were dead in trespasses, [God] made us alive together with Christ (by grace you have been saved), and raised us up together, and made us sit together in the heavenly places in Christ Jesus” (Ephesians 2:5-6).

You are enthroned with the Lord Jesus Christ. When He died, you died. When He rose, you rose. When He ascended, you ascended. When He is seated at the right hand of God, you are in Him, seated with Him. You have kingdom authority.

Jesus said, “I give you authority over all the power of the enemy” (Luke 10:19). It’s time we started using it.