What to Do When You’re Under Ungodly Authorities 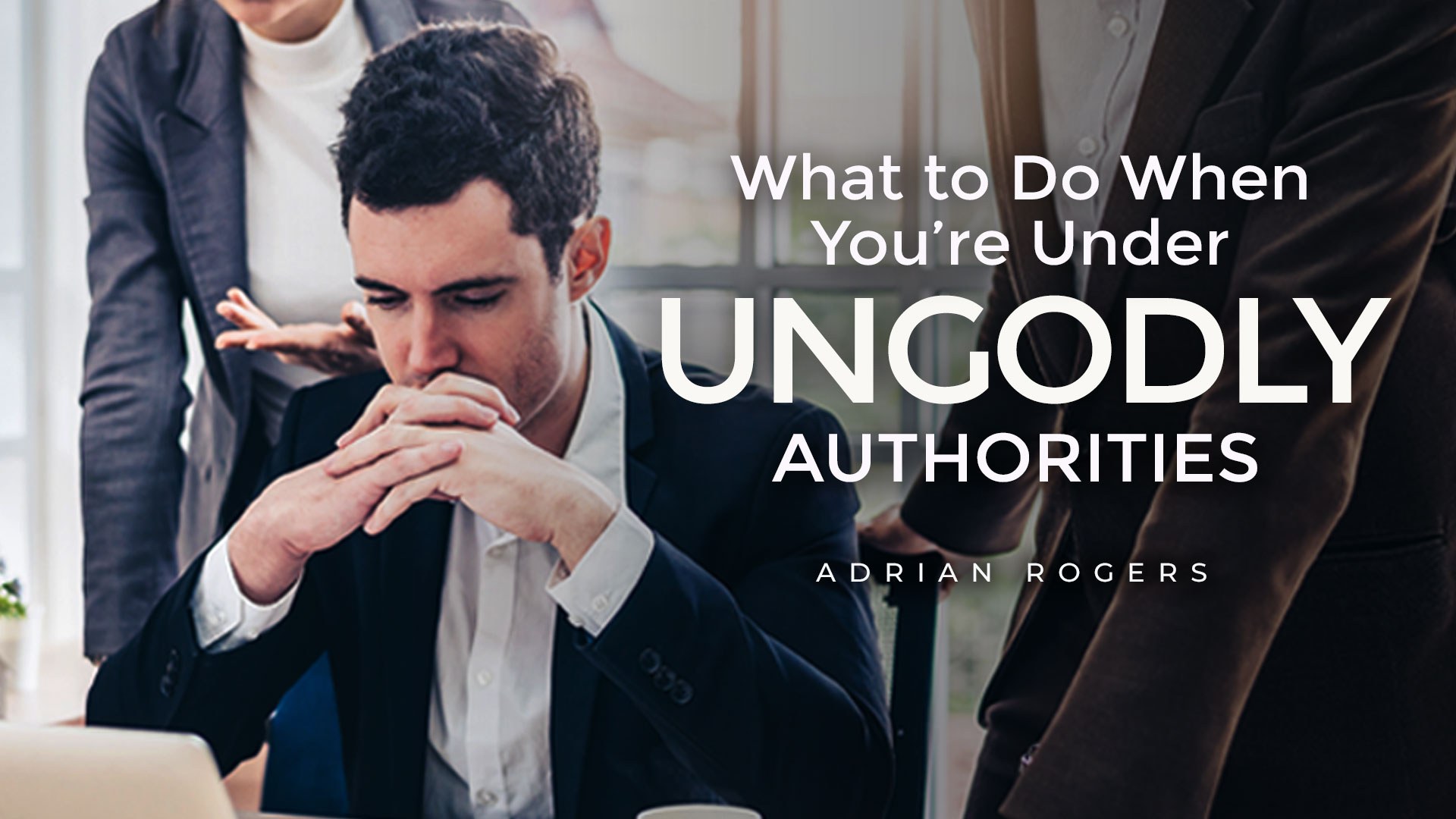 King David was a mighty warrior, a man who exercised kingdom authority. As a boy, David killed a bear, a lion—and then Goliath. Later, as king, he went from victory to victory.

But the greatest victory David ever won was not over someone else; it was the victory over himself. One day in a cave, he learned the lesson I want you to learn:

To have Kingdom Authority, you must remain under authority.

It’s not God’s plan for you to be defeated by the world, the flesh, or the devil; Jesus died and rose again to give you authority over these. But we will never be over what God plans to put under us until we are willing to get under and stay under those things God has put over us.

In First Samuel 24, David is hiding from Saul, the current king of Israel at the time. Though he is an unworthy king, nevertheless, Saul is God’s appointed and anointed king. Saul learns that God is going to replace him and put David on the throne. He sees David as the rising star—and his own sun is setting. David becomes public enemy number one. Stewing with jealous rage, Saul’s burning, malevolent ambition focuses all the kingdom’s energies on killing David. He takes 3,000 hand-picked men to pursue David.

One day, as David hides in a cave, Saul enters. It’s dark in the cave. David’s eyes and those of his men are accustomed to the darkness, but Saul can’t see them. They whisper, “This is your opportunity, David. Just one sword strike, and goodbye to hiding in caves. Welcome riches! Honor! Power! Authority! You’ll be the next king!” Sword in hand, David goes over in the darkness and cuts the hem off Saul’s robe. That’s how close he is, but he won’t kill Saul.

After Saul is a safe distance away, David cries out, “Saul, see what I’m holding? See what I could have done to you?”

Refusing to execute vengeance, David won a victory that day—not over Saul, but over himself. “He who is slow to anger is better than the mighty, and he who rules his spirit than he who takes a city” (Proverbs 16:32).

He practiced what the New Testament says in Romans 12:21, “Do not be overcome with evil, but overcome evil with good.” David gained a great victory.

Jesus said that in the last days, “because lawlessness will abound, the love of many will grow cold” (Matthew 24:12). We see it in our streets, in our homes, and in our churches. Children are rebelling against their parents like never before. In churches, there’s a spirit of rebellion—arrogant theologs are actually revising the Bible to make it politically correct. All this is Satan at work.

What should we do when facing ungodly authority? Three things I want to write upon your heart.

1. We Must Recognize Kingdom Authority

Even though Saul was unworthy, he was still Israel’s anointed king. When David later had another opportunity to kill Saul, he said, “Do not destroy him; for who can stretch out his hand against the Lord’s anointed, and be guiltless?” (1 Samuel 26:9).

How do we recognize Kingdom Authority? Romans 13:1-5 tells us.

Let every soul be subject to the governing authorities. For there is no authority except from God, and the authorities that exist are appointed by God. Therefore whoever resists the authority resists the ordinance of God, and those who resist will bring judgment on themselves. For rulers are not a terror to good works, but to evil. Do you want to be unafraid of the authority? Do what is good, and you will have praise from the same. For he is God’s minister to you for good. But if you do evil, be afraid; for he does not bear the sword in vain; for he is God’s minister, an avenger to execute wrath on him who practices evil. Therefore you must be subject, not only because of wrath but also for conscience’ sake.

We may feel like David’s friends who said, “You have a chance to get him. Get him!” But David humbly said, “No, God sets up kings and He brings them down. I will be subject to those authorities God put over me.”

“But what if I have an unworthy authority? What if my parents are unworthy? My husband? My President? My mayor? What do I do?”

Here’s what you don’t do: do not have a spirit of rebellion. We must recognize the authority God put over us.

There was a time when Samuel, speaking for God, told Saul to do something. Saul refused, and Samuel rebuked him with these words: “For rebellion is as the sin of witchcraft, and stubbornness is as iniquity and idolatry. Because you have rejected the word of the Lord, He also has rejected you from being king” (1 Samuel 15:23).

That doesn’t mean we approve what some authorities do any more than David approved what Saul did. Saul was very wrong, but David understood the principle of being under authority. Therefore, David learned to rule with great power and authority.

2. We Must Respect Kingdom Authority

Even though Saul was unworthy, David recognized and respected his authority. He spoke to Saul respectfully, while not giving in to Saul’s wicked ways. David said, “I’m trusting God to get me out of this.”

Now, that doesn’t mean we give in to wickedness or approve error, any more than David approved what Saul did. But it was David’s submission that brought Saul’s kingdom crashing down and made David the king he was.

I hope you will not only understand but also live and practice kingdom authority. If not, you’ll never understand spiritual authority. Teach your children to behave respectfully to authority. Around the dinner table, if you begin criticizing policemen, pastors, and presidents, you’re building in your children a spirit of rebellion. It’s going to come back on you, and you’re going to have a little rebel on your hands.

3. We Must Rest in Kingdom Authority

We don’t rest in governments or the Sauls who lead them; we rest in the Lord. David was ahead of his time. He understood what the Spirit later wrote:

Beloved, do not avenge yourselves, but rather give place to wrath; for it is written, “Vengeance is Mine, I will repay,” says the Lord. Therefore, if your enemy is hungry, feed him; If he is thirsty, give him a drink; For in so doing you will heap coals of fire on his head.” Do not be overcome by evil, but overcome evil with good. (Romans 12:19-21)

This is contrary to human nature, isn’t it? Be honest! It is for me.

That doesn’t mean we blindly obey ungodly government. If you think I believe in that, you are wrong. We exercise submission, but not acquiescence. God’s prophets preached against wickedness. Nathan confronted David. Elijah warned Ahab, Daniel spoke to Nebuchadnezzar, and Moses confronted Pharaoh. God forbid that our pulpits be silent today when wickedness prevails in so many places!

We do not acquiesce, but like David, there must be in us a spirit of humility and surrender over ourselves, and when we get under those things that God has put over us, then God can trust us to bring these wicked kingdoms crashing down.

David’s greatest victory wasn’t killing a bear, a lion, or even Goliath—but that day in the cave, he said, “I’m going to get under those God has put over me so I can be over those things God has put under me.”

When we do the same, God can trust us to bring wicked kingdoms crashing down.

The Church is not the master of the state nor the servant of the state. We’re the conscience of the state to preach God’s truth. That’s how to behave in a cave.

You will never win a victory over self, dear friends, or anything else until you yield to Jesus Christ. You must submit, first of all, to the King of kings, the Lord of lords, Jesus Himself. And when you give your heart to Jesus, He will cleanse you and forgive you of every sin.