What to Do When You Face Wicked Authorities 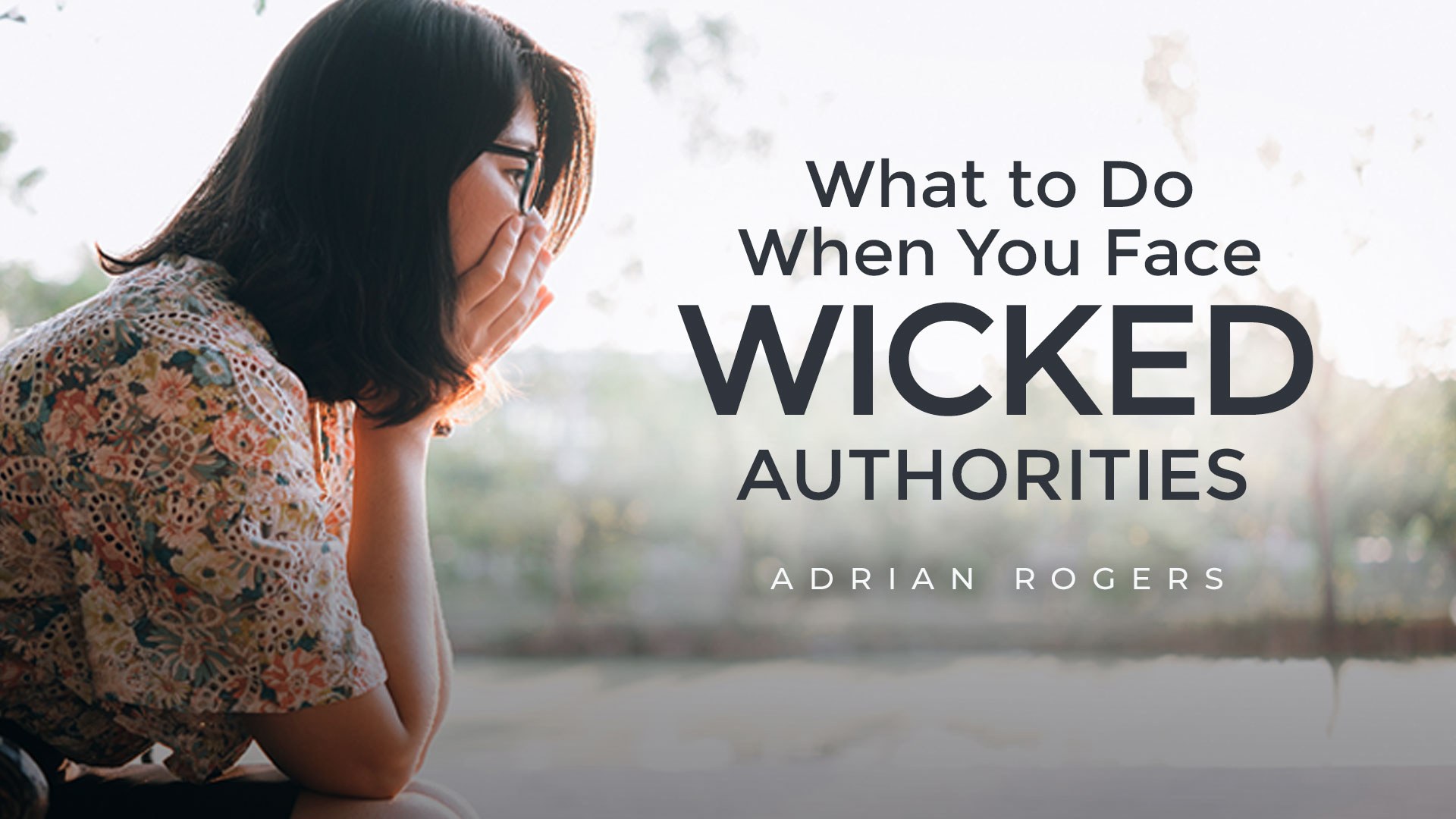 As we continue exploring the truths of kingdom authority, no day or age needs it more than ours. What if we face wicked authorities? Must we obey them? What does God say?

The early church was undergoing terrible persecution. It was open season on Christians.

In the face of such tyranny, the Apostle Peter gave believers guidelines for living under authority.

Anyone following Christ today will be going against the tide. The chief weapon God has given us, other than our faith in Him, is a principle many of us don’t like to practice:

The Principle of Submission

We want to live victoriously with power over the world, the flesh, and the devil. But authority and submission are two sides of the same coin.

Submission is a person voluntarily placing himself under another person—both being of equal value—that God may be glorified. Submission is simply getting under the authority God has established, not for that authority’s sake, but for the sake of God Himself, who established it.

When you submit to authority, you’re doing it for Jesus’ sake. You’re submitting not to some human being, but really to Almighty God. When you do, God begins to invest kingdom authority in you.

Living Before the World

Beloved, I beg you as sojourners and pilgrims, abstain from fleshly lusts which war against the soul, having your conduct honorable among the Gentiles, that when they speak against you as evildoers, they may, by your good works which they observe, glorify God in the day of visitation [inspection or observation]. (1 Peter 2:11-12) (Bracketed words are added for clarification.)

Kingdom authority is not for rebels. God cannot trust us and give us the release of the Spirit until we know the restraint of the Spirit. So, the Holy Spirit says through Peter that we’re to submit to:

Therefore submit yourselves to every ordinance of man for the Lord’s sake, whether to the king as supreme or to governors. …For this is the will of God, that by doing good you may put to silence the ignorance of foolish men— as free, yet not using liberty as a cloak for vice, but as bondservants of God. Honor all people. Love the brotherhood. Fear God. Honor the king. (1 Peter 2:13-17)

Those who oppose God’s people are ignorant and foolish. (See 1 Peter 2:15.) How do you silence them? By the astounding quality of submission. Our submission silences them like a muzzle silences a barking dog. Submission doesn’t sound like authority, but that’s the secret. Remember the centurion who said to Jesus, “I know why You have authority. Because You are under authority.”

1 Peter 2:17 is profound in the ways it speaks to every aspect of our life: “Honor all people. Love the brotherhood. Fear God. Honor the king.”

Social life. Everyone created in God’s image should be honored. The word “honor” is the word from which we get our word “preciousness.” All people are intrinsically precious to God.

Church life. We are to “Love the brotherhood,” having special love for our brothers and sisters in Christ.

Spiritual life. If there’s one thing we need today, it’s to rekindle the fear of God. “Fear of the Lord is the beginning of wisdom” (Proverbs 9:10), and we’ve lost that.

Political life. “Honor the king.” Whether our government is led by king or president, the principle is the same.

Servants, be submissive to your masters with all fear, not only to the good and gentle, but also to the harsh. For this is commendable, if because of conscience toward God one endures grief, suffering wrongfully. For what credit is it if, when you are beaten for your faults, you take it patiently? But when you do good and suffer, if you take it patiently, this is commendable before God. For to this you were called, because Christ also suffered for us, leaving us an example, that you should follow His steps. (1 Peter 2:18-21)

Servants then were slaves, not treated as persons but as things. Yet Peter says: “Slaves, be in submission to your master as unto the Lord.” We are of course against slavery with all of our hearts. Slaves found themselves in a situation over which they had no control. Peter wasn’t advocating slavery but speaking of reality.

You’re not a slave in that sense, but you may work for what you call “a slave driver,” an ungodly boss. There’s no better place to demonstrate the power of the Gospel than if you have an unfair, ungodly boss.

Continuing to chapter 3: “Wives, likewise, be submissive to your own husbands, that even if some do not obey the Word, they, without a word, may be won by the conduct of their wives” (1 Peter 3:1).

Just as God the Father, Christ the Son, and God the Holy Spirit are co-equal, so are men and women. A woman is not inferior to her husband. To be submissive to an ungodly husband who will not obey the Word of God is totally contrary to the wisdom of the world, but the Bible teaches that a home cannot function without a head.

When one equal places himself or herself voluntarily under another equal, God is glorified. Galatians 3:28 says we are all one in Christ—that’s settled. But God teaches authority. If a wife has an ungodly, unworthy husband, she’s not to lecture him or leave him, but to love him.

But what if he’s abusive? We’re coming to that in a moment.

Authority flows out of submission.

Remember what Samuel said: “Rebellion is as witchcraft” (1 Samuel 15:23). When you have the spirit of rebellion, you’re like Satan, the original rebel, who said, “I will exalt myself.” When you submit to authority, you’re like the Lord Jesus, who, though He was God, humbled Himself, (See Philippians 2:6-9.) and God “gave Him a name that is above every name.”

Jesus has incredible authority because of this principle. Being submissive does not demean you, it exalts you. It makes you like the Lord Jesus Christ.

The Problems of Submission

Three places of submission—government, at work, and at home—can be truly hard.

Let’s look at each one.

The Holy Spirit had Paul write this because authority is necessary:

Be subject to the governing authorities. For there is no authority except from God, and the authorities that exist are appointed by God. Therefore, whoever resists the authority resists the ordinance of God, and those who resist will bring judgment on themselves. For rulers are not a terror to good works, but to evil. (Romans 13:1-3a)

Whether king, oligarchy, or democracy, there can be no civilization without government.

How do we live out this principle of submission in a crude, impure, profane age, under ungodly government? Remember, when Paul wrote Romans 13, Nero was emperor. What if we’re asked to do something morally or biblically wrong?

Understand that all human authority is limited.

Suppose government passes a law that forces you to do something contrary to God’s will. Suppose a governing official told me I couldn’t preach the Gospel. Listen carefully: submission is not always the same as obedience. Your ultimate loyalty belongs to God.

Never give Caesar what belongs to God. In Acts 5:28-29, the magistrates told the apostles, “You’re upsetting the status quo. Don’t preach anymore.” Peter responded, “We ought to obey God rather than men.”

For disobeying, they were thrown in jail. They had submitted as far as they could, but they didn’t stop preaching the Gospel.

Sometimes the governor, our boss, our spouse, insists we do something antithetical to the Word or truth of God. Then we must obey God rather than whoever commands us to disobey Him. Obedience to God always takes precedence over obedience to human authority. We see this throughout Scripture:

We must have a spirit of submission, but submission is not always obedience. We do not render unto Caesar the things that are God’s.

We will be civil but not silent if the government:

Lesson: All human authority has its limits.

Suppose you work for someone who asks you to do something dishonest, cook the books, steal for him, yet you’re to be in submission.

The Bible says we are to live in peace. But it also qualifies that directive in Romans 12:18 when it says, “If it is possible, as much as depends on you, live peaceably with all men.” Sometimes it’s impossible because we can’t control what other people do.

What if a husband is physically abusing his wife, yet the Bible says, “be in submission”? Romans 12:18 again applies. If my daughter were being abused, I’d get her out of that situation. I wouldn’t say, “The Bible says submit.” Yes, she’s to have a submissive spirit, but there comes a time when the higher law takes precedence. Remember, our ultimate allegiance is to Almighty God.

The Price of Submission

First Peter 2:21-25 reminds us that Jesus’ suffering was undeserved. He took our sins upon Himself so we could be saved. He handed Himself over to God, knowing His Father would even the score.

Think of a doctor who makes himself sick to make his patient well, then turns around and pays the hospital bill. That’s King Jesus. He did it and left us an example that we “should follow His steps.” There’s a cost to discipleship, but the rewards are incomparable.