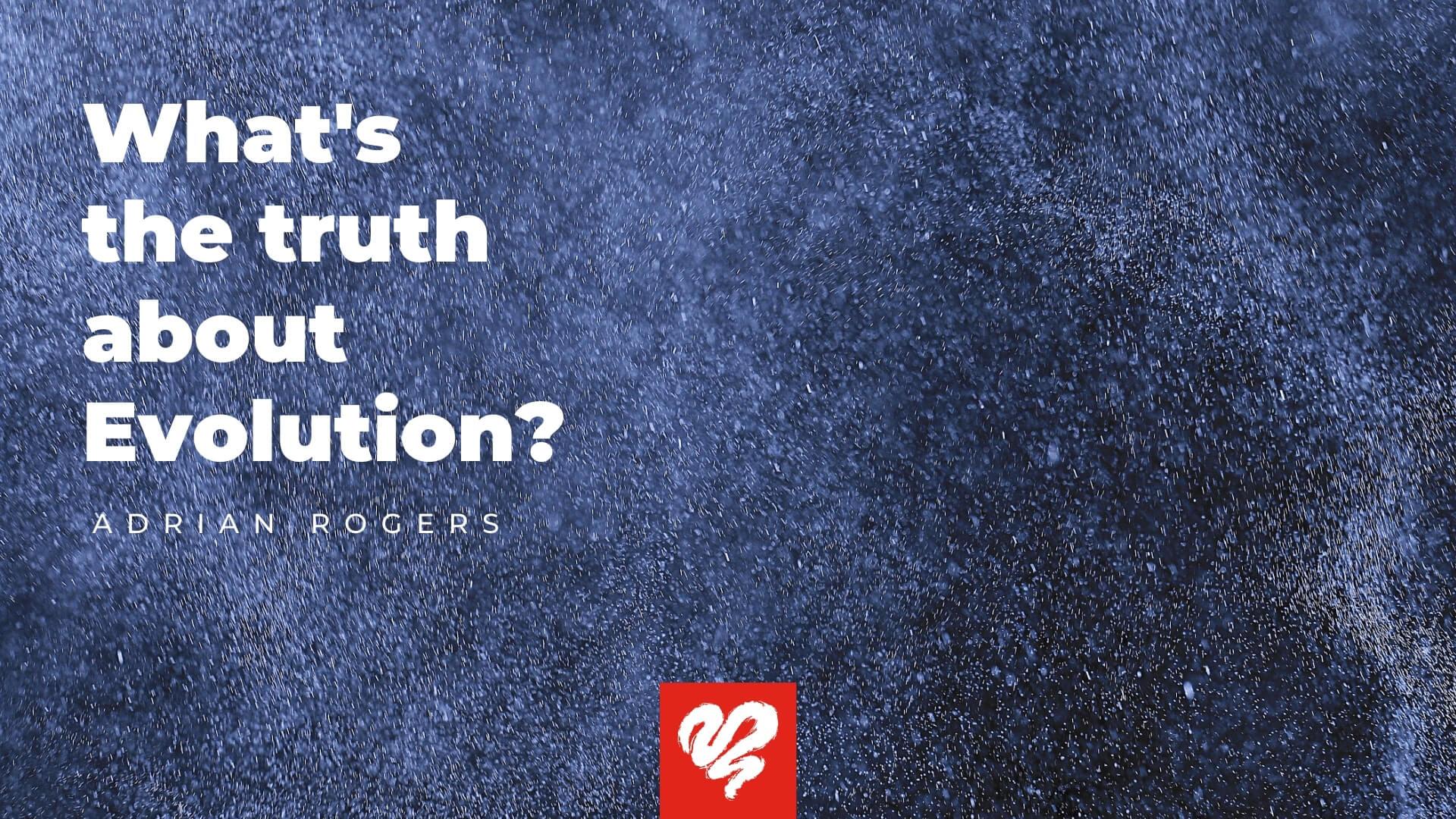 What is the Truth About Evolution?

"Timothy, keep that which is committed to thy trust, avoiding profane and vain babblings, and oppositions of science falsely so called: which some professing have erred concerning the faith." (1 Timothy 6:20-21)

If you reduced all the questions in the world down to one, it would simply be: “Did God make man, or did man make God?” Is man the special creation of Almighty God, or is God merely the figment of man’s imagination? Did man simply evolve without divine creation? What’s fact? What’s fiction? Creationism or Darwin’s theory of evolution?

Evolutionists ask us to believe that all life started from an accident billions of years ago that caused life to generate from nowhere. Everything came from a speck of protoplasm, and all that separates man from lower forms of life is that he can think abstractly.

What does that say about the value of human life? It says we have no intrinsic value or sanctity. We’re not made in the image of God but merely an accident. Nor is there any morality. The theory of evolution declares that since there’s no Creator, there’s no fixed standard of right and wrong. My life has neither meaning nor purpose. I’m no different, no higher or lower, than a cat, dog, or flea.

So is evolution really a scientific fact? For the answer, let’s go to the source, Darwin’s book On the Origin of Species, where he proposes that every organic thing on earth, from plants to animals, developed from a speck of protoplasm. Over eons of time, they evolved through mutation (plants and animals adapting to their changing environment) and natural selection (survival of the fittest).

Our children are taught that nothing plus time plus chance are all it took to turn amoebas into astronauts and monkeys into men. When I was a youngster, stories about frogs that turned into princes were called fairy tales, not science.

Four Bridges No Evolutionist Can Cross

Bridge 1—The origin of life

If we ask where that first speck of algae or protoplasm came from, there’s no answer except to propose life came from “spontaneous generation,” a fancy way of saying non-living matter magically, mysteriously, developed a spark of life.

“It had to happen,” evolutionists say, “because we don’t believe in intelligent design or special creation.” But more than a century ago, scientist Louis Pasteur proved “spontaneous generation” impossible. Life only arises from life. That’s a basic axiom of biology. No evolutionist can show the origin of life.

Evolution is a philosophy, expressing a bias, the next best guess of the mind that will not accept God. Dr. D. M. S. Watson, professor of zoology and Comparative Anatomy at University College London, admitted as much when he wrote in Nature magazine, “Evolution is a theory universally accepted not because it can be proved by logical, coherent evidence to be true, but because the only alternative, special creation, is clearly incredible.”

For evolution to be fact, not fiction, a one-cell amoeba must evolve into a tadpole, then a bird, then a chimpanzee, and finally into a human being. One species has to evolve into another species. But in Genesis 1:11-12, God repeatedly states that everything from herbs to humans reproduce “after their kind.” This critical phrase is repeated ten times in Genesis. This is not to deny the existence of all kinds of varieties within species—all sorts of roses, felines, and canines. You can breed and cross-breed. But you cannot turn a cantaloupe into a kitten.

Even if it were possible, if life evolved from a one-celled amoeba, we should expect to find among the billions of fossils on earth at least one of these transitional forms. But not one has ever been found. Scientists say they’re looking for the missing link. But the whole chain is missing.

Bridge 3—Evolution vs. the Second Law of Thermodynamics

This immutable law says that energy can never be destroyed but continually becomes less available for further work as it unravels. Evolution says change happens in an upward direction of complexity. The Second Law of Thermodynamics says the opposite. Left to itself, change always moves toward disintegration, not integration. Everything collapses, deteriorates, grows old, and sooner or later dies. It’s called entropy.

God didn’t design creation this way. Man’s sin brought creation under a curse. Century after century, the world is winding down and dying.

But evolutionists claim that things move toward precision, and given enough time, disorganized things will become organized.

Real life proves the opposite is true. You plant a vegetable garden. If you leave it and walk away, what happens? How about your body? Don’t exercise or take care of it and see what happens. On their own, things don’t organize; they disorganize, collapse, deteriorate, grow old, and die. They wind down, not up.

Love, honor, dignity, self-sacrifice, compassion—if survival of the fittest is the law of nature, where do these intangibles come from? Where does music come from? Where did we get the concept of Almighty God? These qualities and attributes can’t be explained by evolution.

Three Reasons I Believe Evolution Is Fiction, not Fact

Many noted scientists have rejected the theory on purely scientific grounds. They include but are not limited to Michael Faraday, Lord Kelvin, Joseph Lister, Louis Pasteur, Johann Kepler, and Sir William Ramsey. Sir Isaac Newton, considered by some the greatest scientist of all time, wrote:

This most beautiful system of sun, planets, and comets could only proceed from the counsel and dominion of an intelligent and powerful being.

Swedish embryologist Søren Lovtrup said, “I believe one day the Darwinian myth will be ranked the greatest deceit in the history of science. When this happens, many people will pose the question, ‘How did this ever happen?’”

These men had logical reasons to believe the Biblical account of creation and reject Darwin’s theory.

Frankly, the theory of evolution is simply immoral. When you tell young people they’re an accident, they simply “happened,” it robs them of their dignity and purpose. It removes morality.

Darwin said there was a superior race of men. Certain human beings are disposable, “At some future period, not very distant as measured by centuries, the civilized races of man will almost certainly exterminate and replace the savage races throughout the world.”

Darwin was convinced races he considered inferior races may and should be exterminated one day.

Darwin’s philosophies greatly influenced Hitler and Josef Stalin. Between them, they annihilated 57 million people because they believed man was nothing more than an animal. Little wonder Hitler declared, speaking of the Jews, “I have the right to exterminate an inferior race that breeds like vermin.”

If there’s no God, if man is an accident, there can be no fixed standard of right and wrong, no Ten Commandments. Should we be surprised that euthanasia is gaining wide acceptance? That abortion is celebrated? That sexual perversion becomes a valid “alternate lifestyle”?

We’ve taught our children they’re just another species of animal, and now they’re behaving like animals.

Evolution is diametrically opposed to the clear teaching of scripture. Famed historian H. G. Wells, an evolutionist, wrote in The Outlines of History that if man evolved, then “the entire historic fabric of Christianity, the story of the first sin, and the reason for the atonement, collapses like a house of cards.”

Scripture teaches man is God’s special creation, and he fell into sin. Evolution teaches man started in a primordial soup and has been rising ever since. There was no Garden of Eden, no original sin, no depravity, and people are always moving upward. We have no need to be born again.

These two ideas are diametrically opposed. If evolution is a fact, man doesn’t need a birth from above, just a boost from below.

If the account of man’s fall in Genesis 3 is a myth, then the promise of redemption in John 3 is a farce.

Evolution may look and talk like science, but it’s a philosophy, man’s way of hiding from God. If there’s no Creator, man has no accountability to a holy God, no fear of future judgment.

The Bottom Line—What’s Behind Evolution

Why can’t the world simply agree there’s no creation without a Creator, and nothing comes from nothing?

But the God of creation declares we’re not an accident; we’re made in His image. We’re so dear to Him that He sent His Son Jesus to suffer and die for us. We have a divine purpose. Through Christ’s death, burial, and resurrection, we have eternal life.

"This is eternal life, that they may know You, the only true God, and Jesus Christ, whom You have sent” (John 17:3).

Jesus invites you to come to Him. You are precious to God. You have dignity. You have a Heavenly Father who loves you and cares for you. One day, you and I, and Darwin and Hitler—every soul who ever lived—will stand before His Son and be judged.

If you don’t know Jesus, the wisest, best thing you could do would be to investigate not the origin, but the destiny of the species, and primarily your own personal destiny.

If you’re not following Jesus and you want to accept Him as your personal Savior, let’s get it settled today.

Dear God, I know that I am a sinner. I know that You love me and want to save me. Jesus, I believe You are the Son of God, who died on the cross to pay for my sins. I believe God raised You from the dead. I now turn from my sin and, by faith, receive You into my life as my personal Lord and Savior. Come into my heart, forgive my sins, and save me, Lord Jesus. In Your name I pray, Amen.

If you prayed that prayer, please let us know. We want to give you some resources that will help you grow in your faith. Click here for more information.