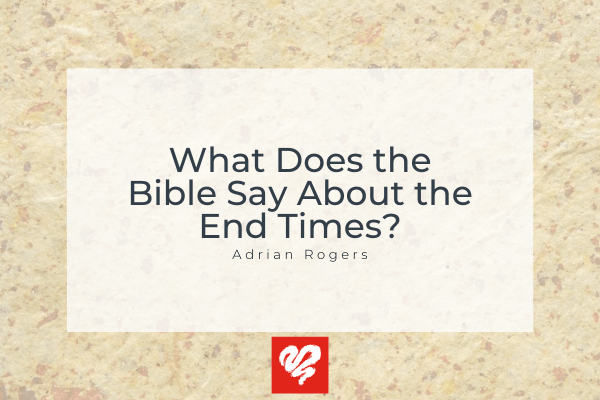 What Does the Bible Say about the End Times?

When people ask, “Is this the end of the world? The beginning of the end?” they sometimes look to pundits, prophets, or psychics—those who not only don’t have divine inspiration but whose predictions come from a source at enmity with God. They cannot tell you the future. Even the unsaved wonder, “Is the Second Coming a real thing?” Christians, too, want to know the signs of the times and when the world will see the literal, visible return of Jesus Christ. People have always wanted to know what’s going to happen. But the only reliable source is the book with a batting average of 1000—the Word of God.

The return of Christ is a major Bible doctrine, mentioned no less than 1200 times in the Old Testament and 300 times in the New Testament. God says this same Jesus who came once before is coming again.

In Matthew 24, Jesus answers two probing questions from His disciples about this. We’re on a journey of prophecy in Matthew 23-25. Looking at our age, then through our age toward His coming, the Word of God reveals the fate of planet Earth.

In Matthew 23, Jesus walked out of the temple for the last time, knowing that within a few days He would be crucified. It’s a chapter filled with grief from His heart as His own people rejected Him—and through Him rejected the Father. In the last 3 verses of Matthew 23, Jesus cries,

O Jerusalem, Jerusalem, the one who kills the prophets and stones those who are sent to her! How often I wanted to gather your children together, as a hen gathers her chicks under her wings, but you were not willing! See! Your house is left to you desolate; for I say to you, you shall see Me no more till you say, “Blessed is He who comes in the name of the Lord!”

In the next 3 verses, Matthew 24:1-3, Jesus tells His disciples that one day there will be no more temple. That didn’t seem reasonable. They couldn’t believe the temple would ever be desolate. Forty years later, that’s exactly what happened. The Roman army under Titus arrived and the temple went up in flames. Layered with gold, all of it melted together and caved in on itself. Plunderers began prying those stones apart, looking for melted gold in the cracks—and exactly what Jesus said (“No stone left upon another”) came to pass.

That should teach us we don’t live by reason, but by revelation—the revelation found in the prophecies of the Word of God.

They thought it was the end of an old age, and the Messianic age was about to begin.

Jesus answers the first two of their questions as He looks through the tunnel of time, specifying seven signs that will occur between their day and the day of His Second Coming.

Seven Signs of the Times at the End of the Age

Take heed that no one deceives you. For many will come in My name, saying, “I am the Christ,” and will deceive many. (Matthew 24:4-5)

Jesus warned it would be a time of great deception. First John 4:1-3 confirms the importance of discernment. Verse 1 says,

Beloved, do not believe every spirit, but test the spirits, whether they are of God; because many false prophets have gone out into the world.

Does that apply today? In the past 50 years, no less than 1,100 people have professed to be Christ.

And you will hear of wars and rumors of wars. See that you are not troubled; for all these things must come to pass, but the end is not yet. For nation will rise against nation, and kingdom against kingdom. (Matthew 24:6-7)

Jesus said the world would never be safe from war. World War I was supposed to have been “the war to end all wars.” That never came true. In 6,000 years of man’s recorded history, an estimated 600 million people have been killed in war. Half of those have died since 1900. Wars are growing in number and intensity, coming to a climax featuring terrorism, hijackings, bombings, and assassinations. Control of Jerusalem is at the heart of much of the unrest.

…and there will be famines, pestilences, and earthquakes in various places. (Matthew 24:7)

With our increased agriculture and genetic engineering, we should have solved the problem of famine. But there’s the bottleneck of distribution. We can have the food, yet be unable to get it to the ones who need it. Revelation 6:6 says a day will come when people will pay $100 for two loaves of bread.

Could we not have solved plagues in 2,000 years? In the 50s we conquered polio, and people thought soon we’d conquer every contagious disease. But then came AIDS, SARS, then Ebola. Now biological and chemical warfare is a specter. Jesus said plagues would be a sign of the days before His return.

Then they will deliver you up to tribulation and kill you, and you will be hated by all nations for My name’s sake. And then many will be offended, will betray one another, and will hate one another. (Matthew 24:9-10)

We will be defamed if we love the Lord Jesus. Religious persecution will increase, centered on Christianity.

This world doesn’t mind religion, but it resents Jesus Christ. More Christians have died for their faith in the past century than all other centuries since Calvary. More Christians were tortured and slain during World War 2 than under the Roman Empire. Some authorities claim that over 50 million Christians were slaughtered in Communist countries for faith in Christ.

No generation has seen such worldwide persecution as today. Christian bashing is the favorite sport of newspapers, radio, and television. How many Sunday morning benchwarmers will leave Bible-believing churches? Persecution will separate true believers from “cultural Christians.”

Then many false prophets will rise up and deceive many. (Matthew 24:11)

G. K. Chesterton pointed out that when we cease to believe in the one true God, we won’t believe in nothing; we’ll believe in anything. “Prophet” in verse 11 means anyone who speaks with authority: a philosopher, professor, scientist, statesman—those who want to mold society to their thinking. They will deceive many, like the days of Noah when God saw that “the imaginations [carefully crafted philosophies] of men’s hearts were evil continually.” The world will embrace a one-world religion that claims God is revealed in Buddha, Krishna, Mohammed—a conglomerate of religions.

And because lawlessness will abound, the love of many will grow cold. (Matthew 24:12)

When false prophets remove society’s moral base, people become cold-hearted. With no moral base, it becomes acceptable to kill babies, perform homosexual marriages, and euthanize the terminally ill or aged. You destroy the fire and glow of true love. Where there’s a crime wave of abounding lawlessness, we become fearful and unfriendly. We might see someone needing help, but we’re afraid and harden our hearts.

And this gospel of the kingdom will be preached in all the world as a witness to all the nations, and then the end will come. (Matthew 24:14)

Before Jesus ascended to Heaven, He commissioned us to take the Gospel to every nation. The Gospel wasn’t given to save civilization from wreckage but to save us from the wreckage of civilization. The Bible never promised we would win everyone to Christ; we are commissioned to take it to the whole world.

Jesus said by the time He came back, the Gospel would be preached worldwide, not to every individual, but to all nations. Has this happened? Yes! Through crusades, radio, television, books, tapes, leaflets—through the Internet, everyone on earth can hear the Gospel of Jesus Christ. The sun does not set on the message of the Gospel.

These seven converging signs “are the beginning of sorrows” (Matthew 24:8). There have always been famines, war, and persecution, but when we see all these things multiply and intensify, something is about to happen. They mark the end of our age, not the end of the world. Jesus returns to reign.

We no longer have to wait on any signs for Jesus to come. He may come at any moment. He has helped us be aware through these seven signs: “This is what will happen. Then shall the end come.” If you stand before God unsaved, you won’t be able to say “I never knew” or “I never heard.”

Don’t you think the wisest thing to do would be to give your heart to Jesus Christ?

Living in Hope on the Edge of Eternity Bible Study