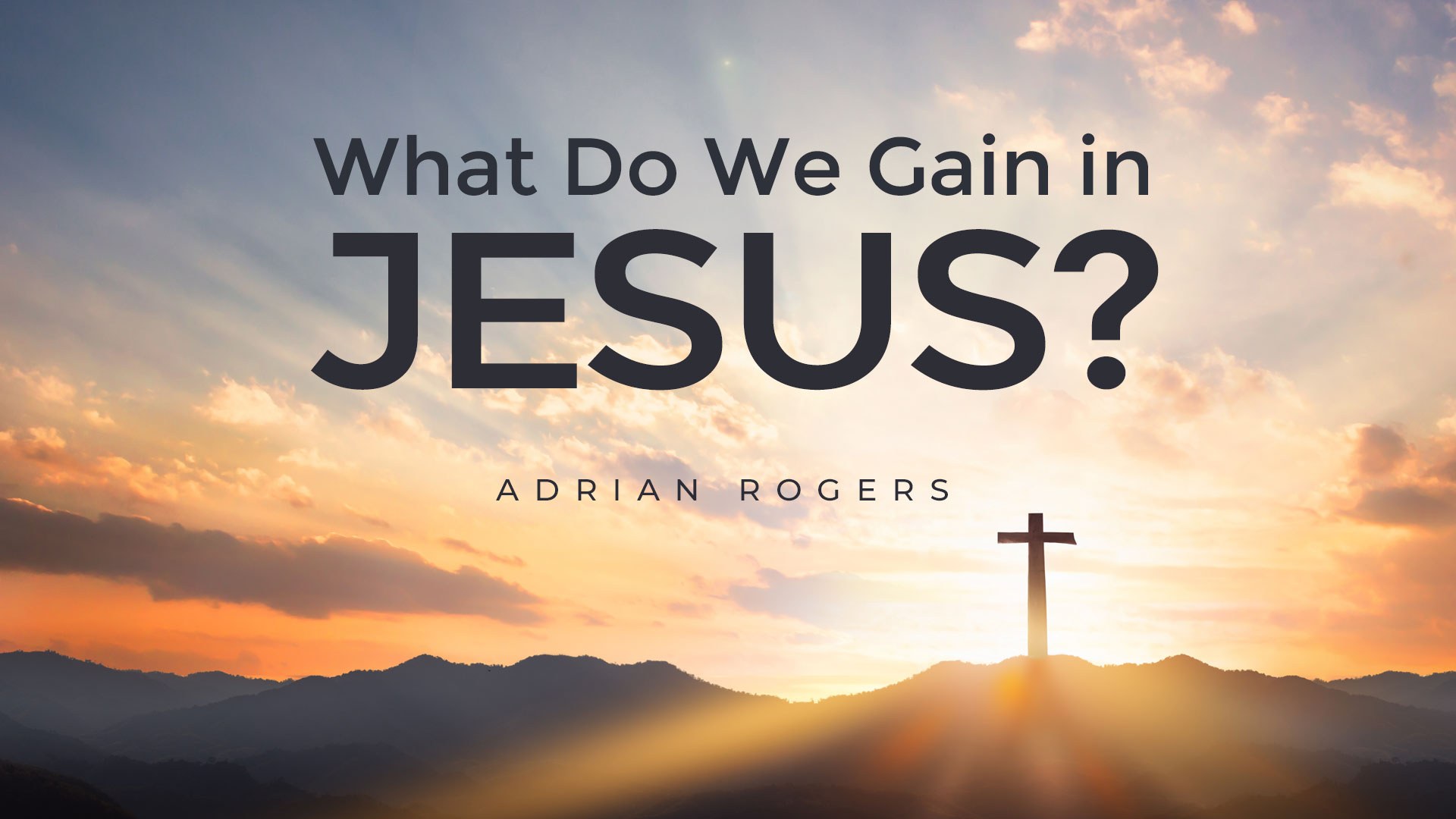 What Do We Gain in Jesus?


This article is based on Pastor Adrian Rogers' message, There is So Much More.

You know the Gospel means “good news,” but I want you to see just how much more Jesus gives you. When we fail to tell people how bad the bad news is they can’t understand just how good the good news is.

Humanists tell you sin is the invention of the church to keep everyone in line. Liberal preachers don’t teach about sin anymore because they fear criticism. They fear man more than God.

Our generation embraces behavioristic psychology and humanistic thinking, in which man is the center of everything. Since people don’t understand the bad news, they’re not ready for the good news.

What is the good news?

For when we were still without strength, in due time Christ died for the ungodly. For scarcely for a righteous man will one die; yet perhaps for a good man someone would even dare to die. But God demonstrates His own love toward us, in that while we were still sinners, Christ died for us. Much more then, having now been justified by His blood, we shall be saved from wrath through Him. (Romans 5:6-9)

Note the words of verse 9: “Much more then….” That’s our theme: there is much more. Three words or phrases are keywords throughout the rest of the chapter.

The first keyword, “one,” is used eleven times in Romans 5 (v. 12, 15, 16, 17,18, 19). When Paul repeats something that often, you begin to listen. Paul is saying you’re going to be identified, one way or another, with one man. It will either be Adam or Jesus. If it’s Adam, you’re lost and on the road to Hell. If Jesus, you’re saved and on your way to Heaven. We’re all born into Adam by our first birth but those who are in Jesus have a new birth. In Adam all die; in Christ, all are made alive.

What God created has been wrecked and ruined by the fall. We all have sinned on our own. But when we’re born again, we take on now a new image, the spiritual image of the Lord Jesus Christ.

The second keyword is “reign.” This word is used five times in Romans 5 (v. 14, 17, 21). Not only are there two men, and you are linked to one man or the other man, but there are two kingdoms. There’s a kingdom of death and destruction, and there’s a kingdom of love, light, and life.

You are in one of those two kingdoms today. You get into the new kingdom by being born into that new kingdom.

The third keyword is actually two words “much more”—used five times in Romans 5.

Much more then (v.9)
Much more being reconciled. (v.10)
Much more the grace of God. (v.15)
Much more those who receive abundance of grace and the gift of righteousness. (v. 17)
But where sin abounded, grace abounded much more. (v.20)

What we lost in Adam

1. Our moral and spiritual strength.

Now we display weakness.
In Adam, you do not have what it takes to be what God made you to be. You are completely, totally without the power to live the Christian life in Adam.

We became God’s enemies. Because we’re enemies, we deserve His wrath (See Romans 5:9-10.).
Sin is high treason against Heaven’s King. Sin is a clenched fist in the face of God.
Sin is the transgression of the law (See 1 John 3:4.).
Sin is failure to do good (See James 4:17.)
Sin is doing anything when you’re not sure it’s the right thing to do. “Whatsoever is not of faith is sin” (See Romans 14:23.)

Now we deserve wrath.
We lost strength, godliness, and peace. Most people are egomaniacs strutting to Hell thinking they’re too good to be damned. Would anyone say he has always done good on every occasion? If you’ve broken one of God’s commandments, you’re a sinner. The worst form of badness is human goodness when human goodness becomes a substitute for the new birth (See Isaiah 64:6, Proverbs 21:4.).

What we gained in Jesus

We gained so much more in Jesus than we ever lost in Adam.

The five “much mores.”

1. The “much more” of His redeeming blood.

“But God demonstrates His own love toward us, in that while we were still sinners, Christ died for us. Much more then, having now been justified by His blood, we shall be saved from wrath through Him” (Romans 5:8-9).

At Calvary, three things came together: God’s justice, His mercy, and His grace.

In the blood of the Lord Jesus Christ, our sins were paid for, God’s justice was satisfied, His grace was given, and we became children of God. We’re made righteous in His sight. We gained so much more than Adam ever lost.

2. The “much more” of His reconciling death.

Jesus gave Himself for us that He might give Himself to us. We are now reconciled. In the Garden of Eden, Adam walked with God, but when you get saved, you don’t walk with God, God walks in you. You’re saved by His life. He comes into you. There couldn’t be a closer, more intimate relationship. He lives in you. This is why I say, “I’d rather live in Romans 5 than in Eden.”

3. The “much more” of His renewing gift.

“But the free gift is not like the offense. For if by the one man’s offense many died, much more the grace of God and the gift by the grace of the one Man, Jesus Christ, abounded to many” (Romans 5:15).

One man sinned and got us into trouble; one man died on the cross and got us all out, and forgave every sin; it is an absolute, sheer gift.

Adam lost and collected his wages of sin. Jesus died and gave a gift. This is the “much more” of God’s grace. God doesn’t tell us to earn, buy, or deserve salvation. We can’t. It is the grace of God.

Adam reigned over an earthly dominion before he fell, but we have a heavenly kingdom. Adam simply ruled the animals. Friend, we’re going to judge angels. We reign with the Lord Jesus Christ.

We don’t have to wait till we get to Heaven to reign with Christ. The Bible says, “We reign in life,” not in the sweet by and by, but right now. We have moved into His kingdom. We are seated with Jesus in the heavenlies. Adam was never seated in the heavenlies.

5. The “much more” of His restoring grace.

“Moreover, the law entered that the offense might abound, but where sin abounded, grace did much more abound” (Romans 5:20).

When Adam sinned, a monster—sin—was let loose in the land. Sin abounded until grace “did much more abound.” If we stumble, if we fail to call upon the grace of God and fall into sin, He never lets us go. He will cleanse us, forgive us, and restore us.

Those are the five “much mores.”

To sum it all up,