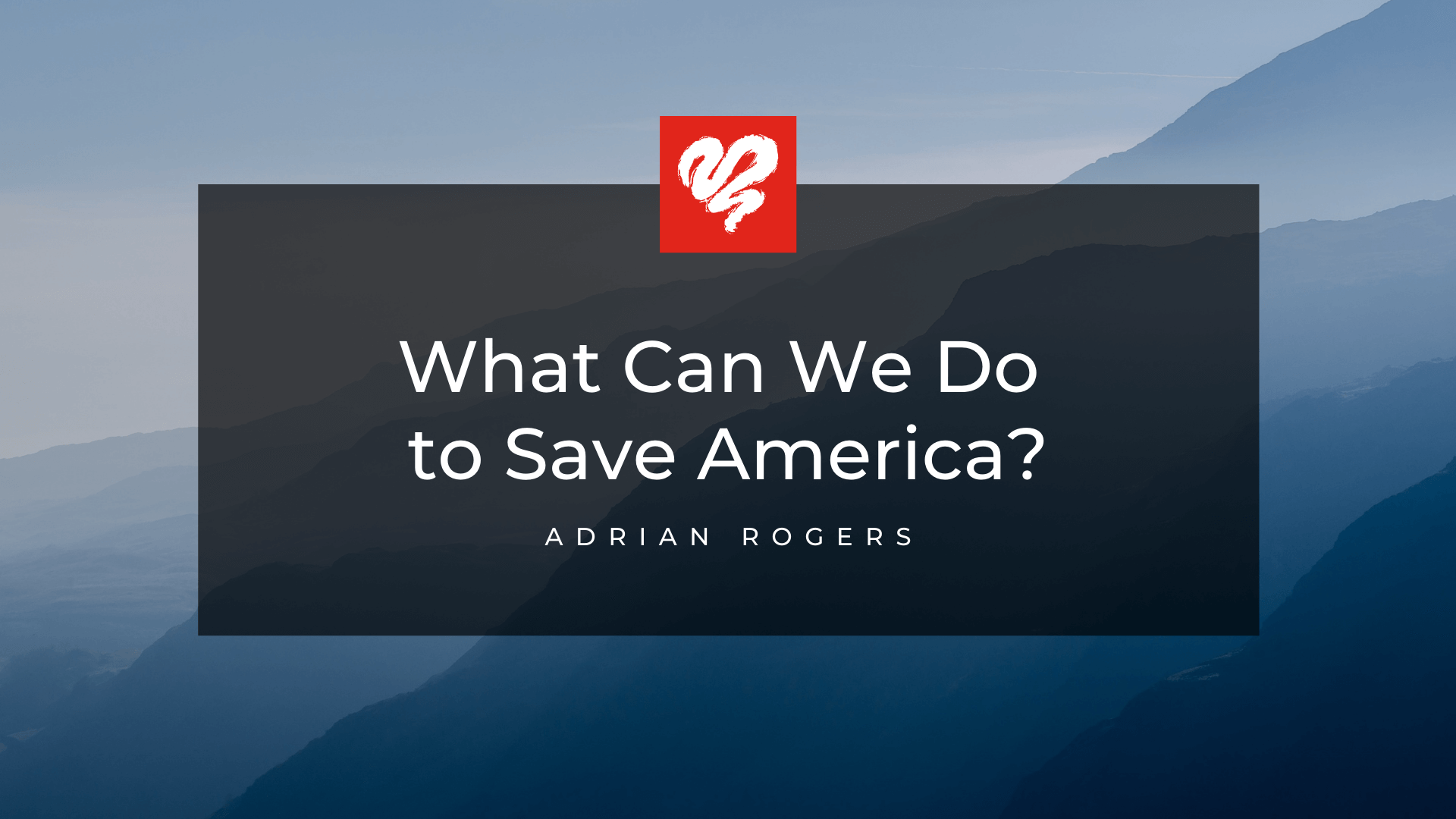 What Can We Do to Save America?


This article is based on Pastor Adrian Rogers' message, The America of Tomorrow.

I still believe America is the greatest nation on earth. Why is that? Our natural resources? Other nations have great natural resources. Our entrepreneurial spirit? No, every nation has people with skills and brainpower. There’s just one reason. God especially blessed this nation because it began as no other nation since Israel: America was founded by God.

God placed in the hearts of the pilgrims a burning desire to worship Him freely without government restraints—so much so that the pilgrims braved the dangerous journey from Europe on a little ship, the Mayflower, to start from scratch and establish a new land for God’s glory. While still on board, they drew up The Mayflower Compact, a covenant with God, which begins: “In the name of God, Amen. Having undertaken, for the Glory of God, and advancements of the Christian faith….”

America began with one goal: to give glory to God and advance the Gospel. “Blessed is the nation whose God is the Lord.” (Psalm 33:12)

Many years ago, American economist Roger Babson was talking with the president of a South American country. They discussed all the productivity, wealth, and advancements in the U.S., wondering why South America was so different. It has equally great natural resources. The president said to Babson, “The difference between our two lands is this: to our shores came those seeking gold; to your shores came those seeking God.” That’s the difference. America’s government was founded upon faith in Almighty God.

Our Declaration of Independence from England was a declaration of dependence on God. It begins with the belief of our Founders: “We hold these truths to be self-evident”—in other words, there’s no argument—that all are “endowed by their Creator with certain unalienable rights.” Our founders believed in God and creation, not evolution. It was “self-evident.” Of course, it is. “The fool has said in his heart, ‘There is no God’” (Psalm 14:1).

"We have staked the whole future of American civilization not upon the power of government but upon the capacity of each and all of us to govern ourselves, to sustain ourselves according to the Ten Commandments of God."

But today we’re in danger of losing our freedom and our nation. Today, we can’t even post the Ten Commandments on classroom walls. Revisionists rewrite our history to erase our Christian heritage.

"The highest glory of the American Revolution was this: it connected in one indissoluble bond the principles of civil government with the principles of Christianity. From the day of the Declaration, they [the American people] were bound by the laws of God, which they nearly all acknowledge as the rules of their conduct."

Is that still true? Hardly. No nation ever had such a Christian beginning. Today, the opposite is true.

In March 1931 Congress adopted “The Star-Spangled Banner” as our national anthem. Few Americans know what the fourth stanza says:

Blessed with victory and peace, may this Heaven-rescued land praise the Power that hath made and preserved us a nation. Then conquer we must when our cause it is just. And this be our motto, “In God is our trust.”

In 1956, Congress adopted “In God we trust” as our national motto and in 1954, added “under God” to our Pledge of Allegiance. In 1952, Supreme Court Justice William O. Douglas said: “We are a religious people, and our institutions presuppose a Supreme Being.” It’s in the fabric of our nation.

But our national heritage lies in decay. Christian values are mocked if not outright banned. The breakup of the family, obsession with self and materialism, sexual promiscuity, open parading of perversion down main streets, and the killing of precious unborn children, reflect society on its last legs.

Every day in America, thousands of pre-born babies are put to death, a blood sacrifice to the demon god of lust. Most abortions are for convenience, a form of birth control. You can be fined $5,000 and put in jail for a year for crushing a bald eagle’s egg, yet a doctor can become wealthy by killing babies in the mother’s womb.

If America is not born again, we will join the graveyard of failed nations. We need a miracle. We must have a national revival. If we don’t, we’re on a collision course with judgment as surely as there’s a God in Heaven. Our nation is sick unto death. What can we do to save America? God tells us in Psalm 85 and 2 Chronicles 7.

Restore us, O God of our salvation,
And cause Your anger toward us to cease.
Will You be angry with us forever?
Will You prolong Your anger to all generations?
Will You not revive us again,
That Your people may rejoice in You?

From this prayerful Psalm, we can learn what is essential for revival.

God is Our Source

Some say it’s too late, but revival is not impossible. Though sin is a pandemic in our nation, God’s power and His grace are sufficient. “Where sin abounded, grace abounded much more” (Romans 5:20). God is omnipotent. He is our hope. Conversely, God is our biggest threat if we don’t repent. I’m not nearly as afraid of what terrorists will do as I am of what God Himself will do.

Don’t look to some political party to save anyone. The only hope for America lies in her churches and godly people. Tell both parties, “Repent and get right with God.” We’re in a mess because we have wicked citizens electing wicked people, making wicked laws apart from God. We must have revival. Its source is Almighty God. Get your eyes on Him.

Psalm 85:6 says “Your people”—God’s people. It’s not the unsaved who need reviving. They’ve never been “vived” in the first place. Revival restores God’s people to what was once there.

Bragging about their vaunted ingenuity, most Americans are egomaniacs strutting to hell, thinking they’re too good to be damned. We’re trying to save face when we need to be on our faces, broken before Almighty God. James 4:6 says, “God resists the proud but gives grace to the humble.” Guard against pride in your life. Nothing puts you farther out of the reach of Satan than genuine humility.

Don’t pray, “Lord, humble me.” God wants us to humble ourselves. If we won’t, He has ways to humble us, but we won’t like them.

You say, “I hope America repents.” No, friend, I hope you do. America is but the sum of its people. There is no national repentance without individual repentance, one by one.

Second Chronicles 7:14 ends, "Then will I hear from Heaven, and will forgive their sin, and will heal their land." When we deal with our sin, God is fully able to send revival. He’s sent revival in dark days before and He can do it again. When we repent and are humble, we will be heard.

A time of weeping

Weep over the coldness of our hearts, the ineptitude of our churches, the weakness of our prayers, the lostness of our neighbors and children.

A time of reaping

Ask God for millions of souls to come to Jesus and to be swept into the Kingdom in an end-time harvest.

A time of rejoicing

I long to see believers in America with a burning, passionate love for the Lord Jesus Christ, rejoicing in God: “…that Your people might rejoice in You” (Psalm 85:6). There’s no greater, higher joy.

In this season, will we watch our freedoms disappear? Or as churches and individuals, will we ask God in effectual fervent prayer for revival? There’s hope as long as there’s God. Stop looking around at the turmoil. Start saying, “O, God, get my heart right. Let it begin in me.”

Pray God will do whatever is necessary to awaken this nation, to stir us, that we might see Psalm 85’s prayer reproduced in us today. “Will You not revive us again, O Lord, that Your people may rejoice in You?”

The America of Tomorrow Outline and Transcript