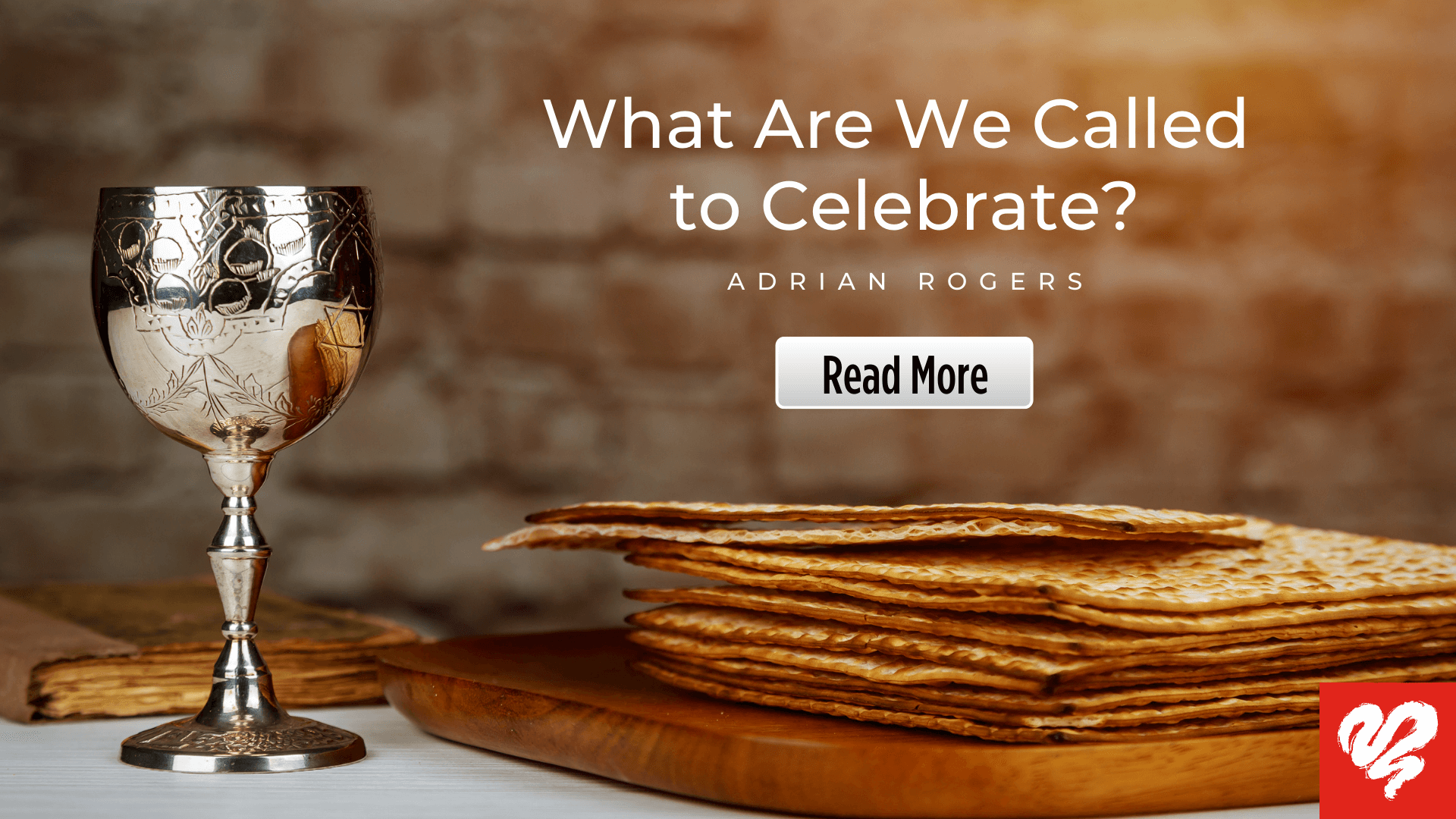 What Are We Called to Celebrate?

I’m calling you today to a celebration. Passover is the celebration of who Jesus is and what He’s done for us. Jesus was not a somber recluse. Just look at Him at the wedding in Cana where He performed His first miracle. Describing the Lord Jesus, Hebrews 1:9 says, “God has anointed You with the oil of gladness more than Your companions.”

One reason they crucified Jesus was that He enjoyed life, and those sanctimonious Pharisees couldn’t stand it. Some of our best witnessing for Christ comes from sharing His joy and gladness. Salvation is a feast. Most people aren’t all that interested in Heaven or Hell—they just want to know how to survive Monday. If you show up looking like a funeral director, they’ll say “No thanks,” no matter what you want to share.

Christians are called to celebrate Passover. You say, “That’s Jewish.” Not so fast. Did you know Passover and Easter are inextricably linked? They are, and not just because they’re linked on the calendar. Have you thought about a Christian celebrating Passover? Paul did, speaking to Christians in this passage, using leavened dough to represent sin.

Therefore, purge out the old leaven [yeast], that you may be a new lump since you truly are unleavened. For indeed Christ, our Passover, was sacrificed for us. Therefore, let us keep the feast, not with old leaven, nor with the leaven of malice and wickedness, but with the unleavened bread of sincerity and truth. (1 Corinthians 5:7-8)

Paul says, “Christians, let us keep the Passover feast.” Passover is a celebration both Christians and Jews are told to keep.

What is Passover all about?

A lamb. The Jews were slaves in Egypt, but God said, “You’re My chosen people. I will bring you out.” On the night called “Passover,” He did just that and headed them toward Canaan, their homeland.

When Pharaoh refused to release God’s people, a series of plagues descended on Egypt to get Pharaoh to turn them loose. Nothing worked until God sent the final plague: the death angel. The firstborn in every family would be slain… unless a particular family had put the blood of a lamb upon the doorposts of their house. God had said, “When I see the blood, I will pass over you.” Passover is all wrapped up in a perfect little lamb.

The Old Testament is a book of prophecy; it says Someone is coming, referring to Jesus. God tells Moses and Aaron the Israelites are about to have a brand-new beginning (Exodus 12:1-11). The lamb each Jewish household was to prepare foretold the Lamb of God, Jesus Christ.

The symbol of Egypt was a coiled serpent, powerful and poisonous. But there’s nothing more gentle, meek, or defenseless than a lamb. With no fangs or claws, it seems to present itself for slaughter. (See Isaiah 53:7 and Acts 8:32.) Yet the lamb decimates the serpent. Its blood upon Jewish doors saved God’s people from the death angel and secured their freedom from Egypt. This same blood depicted our salvation through Jesus’ death on the cross. Christians have every reason to celebrate Passover.

“Your lamb shall be without blemish”—a perfect male lamb (Exodus 12:5). In time to come, the priests would examine lambs in the Temple to make certain they were spotless.

On the appointed day, the father in each home, around 3:00 p.m., was to take the lamb, kill it, and catch its blood in a basin. The blood was painted across the top and sides of each home’s door. God was teaching His people so long ago a fundamental truth in the Word of God: without the shedding of blood, there is no remission of sin.

Why? Because the life is in the blood; but the wages of sin is death. There must be atonement for sin, and atonement requires the taking of innocent life. The lamb had to be slain. Salvation is not learning lessons from the life of Christ but receiving life from the death of Christ, the spotless, slain Lamb.

The father was instructed to take some hyssop, a common weed, dip it in the blood, and paint the doorposts and lentil of the home’s entryway. Then everyone in the household was to come inside and remain there all night, while the death angel passed through the land. Everyone who entered the safety of the house had to enter through and under the blood of the lamb. God said, “When I see the blood, I will pass over you.”

They were to roast and eat the lamb that night, along with unleavened bread and bitter herbs (Exodus 12:8-9), symbolic of the coming sacrifice of the Lord Jesus. On the cross, Jesus felt the fire of God’s wrath against all of mankind’s sin. Bitter herbs depicted repentance and sorrow. Not only were they broken over their sin, but they were broken from their sin in genuine repentance. Remember, Jesus said, “Unless you repent, you will all likewise perish” (Luke 13:3,5).

God also told them, “Don’t do work on the Passover. Instead, rest.” Why? Because Passover is the finished work of Jesus. We’re not saved by works; we’re saved to do good works. Have you stopped struggling to be saved? Salvation is not the end, it’s the beginning. They were told: have staff in hand, shoes on, dressed and ready. We’re to be ready to serve the Lord.

A quarter of a million Jewish homes were roasting a lamb, and as they did, they were becoming no longer slaves but one people, one nation, fellowshipping over a lamb.

They were to eat it all, leaving no leftovers. When you receive Jesus, you don’t receive him partly, you take all of Him as Lord, Master, Mediator, and Messiah. You don’t take Him as Savior and decide later whether or not you’ll make Him Lord of your life. If you’ve not made Him Lord, it’s my duty to inform you, He is not your Savior.

As the Passover meal ended, this lamb gave them strength, power, and nourishment. When they walked out of Egypt, the lamb, now inside them, walked out with them (“Christ in you, the hope of glory,” Colossians 1:27).

Jeremiah the prophet looked backward to Passover and forward toward Calvary. I wish every son and daughter of Abraham could understand this passage:

Unlike the Passover, God’s law would be written in their hearts and minds. They will have intimate knowledge of God, and their sin will be forgiven forever. Jeremiah foretells a new covenant/testament with Israel, where God has a lamb once again—a different Passover lamb. When John the Baptist saw Jesus, he proclaimed our redemption, exclaiming, “Behold! The Lamb of God who takes away the sin of the world” (John 1:29)!

You were not redeemed with corruptible things, like silver or gold, from your aimless conduct received by tradition from your fathers, but with the precious blood of Christ, as of a lamb without blemish and without spot. (1 Peter 1:18-19)

On Palm Sunday when Jesus entered Jerusalem on a donkey, he came down the Mount of Olives, past the Kidron Valley, then up into Jerusalem and the Temple Mount. God’s Lamb entered the city as the people cried, “Hosanna!” At the same moment, priests were bringing those Passover lambs from the field of Bethlehem through the sheep gate, where they would be examined to detect any flaw.

More than one-third of the Gospel message is centered on this last week of Jesus’ life, because the Saducees, Pharisees, Herodians, and Pilate each examined Him, concluding, “No man ever spoke like Him.” As Pilate examined God’s perfect lamb, he admitted, “I find no fault in him, and neither do you.” Jesus faced His enemies asking, “Which of you convicts me of sin?” (John 8:46). Jesus is God’s spotless lamb.

“Christ our Passover is sacrificed for us” (1 Corinthians 5:7).

The last Passover meal Jesus ate with his disciples became the last of the old Passovers and the first of the new ones.

During dinner, “He took bread, gave thanks and broke it, and gave it to them, saying, ‘This is My body which is given for you; do this in remembrance of Me’” (Luke 22:19).

This will amaze you: As it bakes, the cracker-like matzah bread becomes striped and has small holes in it. Jesus’ body was beaten with many stripes and pierced by the centurion’s spear. Traditionally the Passover bread goes into the middle pocket of a little bag with three pockets. The father removes the bread from the middle pocket and breaks it into two halves. One half is broken into smaller pieces given to everyone; the other half wrapped in a linen napkin and hidden away. The children are sent to find it in its linen wrapping, buried out of sight.

For centuries the Jews have held in their hands an emblem of the Trinity—Father, Son, and Holy Spirit—and the death and burial of The Lamb.

Jeremiah said a new testament/covenant is coming. Jesus closed the loop: “Likewise, He also took the cup after supper, saying, ‘This cup is the new covenant in My blood, which is shed for you’” (Luke 22:20).

There’s no way to be saved apart from the blood of Jesus Christ. We take the hyssop, our faith, and apply His blood: “If you confess with your mouth the Lord Jesus and believe in your heart that God has raised Him from the dead, you will be saved” (Romans 10:9).

We don’t put the blood on the doorpost. Instead, God said through Jeremiah, “I’ll put my law upon their hearts.”

At 3:00 p.m. on Friday, when Jesus was on the cross, as the priests were taking those perfect Passover lambs, drawing a knife across their throats, God’s perfect Lamb bowed His head, saying, “It is finished” (John 19:30). Paid in full. Done. Priests, you can go home now. Passover shepherds, we don’t need you anymore. Set the lambs free. God’s lamb has done it all.

When we come to the Lord’s Supper, we don’t come to mourn a corpse but to hail a conqueror. How do you keep the feast of Passover? Do you celebrate Jesus? Keep it with unleavened bread. Pray, “Oh God, search me, know my heart, see if there be some wickedness in me. Cleanse me from unrighteousness, Lamb of God who died for me.” (See Psalm 139:23-24.)

Since Jesus so loved me, I want to live for Him, love Him, and have no leaven in my heart that nailed Him to the tree.

God calls us to holiness. It’s the blood on the doorposts of our hearts that makes us safe. Rest in Jesus. If you want a brand-new start, this can be the first day of the rest of your spiritual life. If you’ve put your faith in Him, then you can say, “Hallelujah, what a Savior.” I’m calling you to celebrate Passover.

If you don’t know the Lord Jesus Christ, let me lead you in a prayer. Jesus can become your Passover. Right now, the blood can be applied to your heart and God’s angel of judgment will never visit your house if you will receive Him. Pray like this.

Oh God, I thank You for the spotless lamb, Jesus. Thank You, Jesus, that You died for me. Now, Lord Jesus, by faith I receive You. I apply the blood to my own heart. Forgive my sin, cleanse me. In Your name, I pray, Amen.