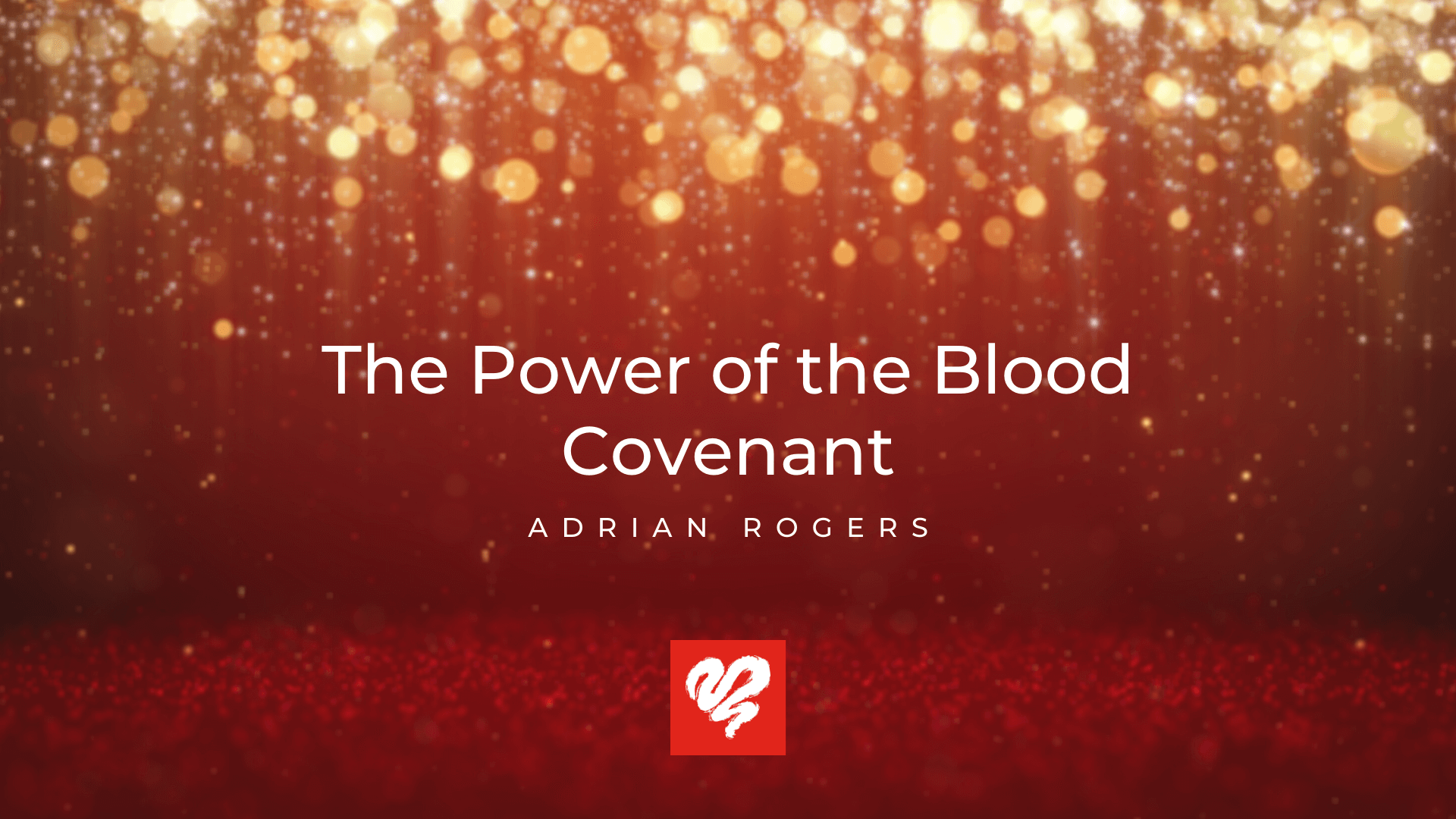 
This article is based on Pastor Adrian Rogers' message, The Blood Covenant.

When David, Israel’s greatest king, was very young, something happened to him that’s both a beautiful picture of Christmas and a portrayal of God’s blood covenant with you. If you’re saved, God and you have a blood covenant together.

After young David killed Goliath, he didn’t go seeking fame. He was humble, introducing himself to King Saul only as the son of Jesse (1 Samuel 17:58). Jonathan, the King’s son, formed an unbreakable bond with David—a blood covenant. The Bible says Jonathan’s soul “was knit to the soul of David” (1 Samuel 18:1).

What is a “blood covenant”? The Old Testament phrase literally means “to cut a covenant.” In old western movies, we’ve seen two people making a blood covenant by cutting an incision on their wrists, joining hands, and lifting them to heaven in a promise, a covenant, a co-mingling of lives. The scar remaining was called “the mark of the covenant.” If you don’t realize Almighty God is in a covenant with you, you’ll never live in victory.

Just as we are sometimes closer to our brothers and sisters in Christ than to members of our natural families, Jonathan became closer to David than to his own father. In their blood covenant, Jonathan and David vowed to be forever loyal to each other and their children. (1 Samuel 18:1-3). How does a blood covenant impact your life today?

Christians boast of victory but don’t always live in it. To live victoriously, you need to understand the covenant God made with you when you were saved. The whole Bible is about the blood covenant. All Bible promises are covenant promises. Blood covenants go all the way back to Genesis and God’s blood covenant with Abraham (Genesis 15:9-21). When Jesus held The Last Supper with His disciples, He said, “This cup is the new covenant in My blood, which is shed for you” (Luke 22:20). Each time we come to the Lord’s Table, we celebrate the blood covenant.

Christmas and God’s blood covenant with you are locked together. The Lord Jesus was sent to fulfill God’s promise of a Savior (Genesis 3:13-15), and through His blood, each of us can be forgiven, redeemed, and accepted by the Father.

Christmas in First and Second Samuel

When young David began receiving praise from the Israelites, King Saul--insane with jealousy--sent out a royal edict that David must be killed. He began hunting David like a wild partridge on the hills of Judea. For years, Saul focused all his forces on killing David. Then one day, Saul and Jonathan were both slain during a battle against one of Israel’s enemies. Now David, whom God had anointed even before his fight with Goliath, was king.

But in Saul and Jonathan’s family, there was blind panic. Imagine their thoughts—David is suddenly king. They wondered, “When will the retaliation begin? When will David take vengeance on his enemies?”

Jonathan had a little son named Mephibosheth. When his nurse heard of Jonathan’s death, she grabbed the boy to take him to safety in a desert wasteland called Lo-Debar. She didn’t know about the blood covenant between David and Jonathan. In haste, she dropped little Mephibosheth and fell on him, crippling him for life.

How many times the child must have asked her,

“Why am I here?”
“Because someone’s trying to kill you.”
“Why am I crippled?”
“Because we were running from him.”
“What’s going to happen?”
“You better hope he never finds you.”

Mephibosheth grew up with this lesson ingrained: fear David, hate David. There he was, dragging his crippled limbs, eating dust, breathing dust, drinking from a tin cup, a prince in exile.

Friend, centuries before the manger in Bethlehem cradled a king, you and I were just the same as Mephibosheth—crippled, exiled from our King, drinking from a tin cup. In the Garden, before the Fall, we were destined to inherit the Earth, to rule and reign. Then we lost our inheritance.

But that wasn’t the end of the story, either for Mephibosheth or for us. Mephibosheth is a picture of our desperate condition before we received God’s forgiveness, kindness, and agape love. The blood covenant transformed Mephibosheth’s story—and ours.

Christmas Came for the Lost

One day, King David was thinking about his covenant with Jonathan. He wondered if a member of Jonathan’s family could possibly still be alive. Some people in the court were probably thinking, “Here it comes…we knew a purge would begin.” But David wanted to fulfill His covenant with Jonathan. Learning about Mephibosheth, he wanted to bless and show kindness to him (2 Samuel 9:1). David said, Go fetch him. Bring him to me.

Out from the palace thundered the royal troops. Out they went to Lo-Debar. Imagine Mephibosheth as a dust cloud brought royal horses right to his door.

Mephibosheth lowers his eyes to the ground, looking one last time at the dirt floor under his crippled feet. As the horse beneath him jostles him away, he looks back at the only home he could remember. Desolate though it was, he had been safe there.

As they bring him before King David, we might wonder if he had any memory of the palace as it had been. Was he thinking of the life he lost? Casting his crutches aside, he fell on his face, trembling like a bird in a trap. But David immediately said,

Do not fear, for I will surely show you kindness for Jonathan your father’s sake and will restore to you all the land of Saul your grandfather; and you shall eat bread at my table continually. (2 Samuel 9:7)

To one expecting death, David said, I’m restoring your inheritance. Dine at my table and be like my son. Mephibosheth could hardly take it in. “Why would you return my inheritance? Have me eat at your table? Be as your son?” Here, David explains, It’s not because of anything on your part. It’s my love for Jonathan. And for his sake, I’m keeping our blood covenant.

Mephibosheth is exactly as we once were, before Christ and the Cross. Before Jesus, no one dared to address God as “Father.” But when Jesus came, He taught us to say, “Our Father” (Matthew 6:9). Now we are beloved in Christ. We’re inheriting what we don’t deserve through the blood covenant.

Until now, Mephibosheth saw David as an enemy. But he’s no longer out of fellowship with the king; he’s in fellowship. No longer running from David, he’s running to David. He has a decision to make. He must:

Does that sound familiar? Those are the terms of salvation in the New Testament: repentance and faith!

Mephibosheth ratified the covenant. Immediately, Christmas came to the lowly former resident of Lo-Debar as he was transferred to the palace of the king.

Yesterday, Mephibosheth lived on the backside of nowhere, eating and breathing dust. Today, he awakened on silken sheets in the palace. Servants arrived to meet his every need, saying, “The king and his sons are waiting for you. You’re coming to breakfast at his table.” He came down to a table groaning with food. There’s a white linen tablecloth. His misshapen limbs are hidden beneath it.

This is a picture of what Jesus does for us—covers us with His righteousness, clothes us in pure white linen (Revelation 7:9).

Mephibosheth must have been thinking, I can’t understand this, but I can’t deny it. It’s because of a blood covenant my father made with David. Here I am! Pass the biscuits! As David passes the bread, there’s a scar on David’s wrist, the mark of the covenant he once made. It dawns on Mephibosheth: the power of a blood covenant.

Each time we come to the Lord’s Supper, Jesus is passing the bread to us. One day at the Marriage Supper of the Lamb, Jesus will pass the bread to us, and we will see His scars.

Though Adam lost our inheritance, God foretold a Redeemer (Genesis 3:14-15). Later He made a covenant (Genesis 15). Jesus restored us. We’re heirs of God and joint-heirs with Jesus Christ (Romans 8:17). For Christ’s sake, God forgives and redeems.

Centuries before Bethlehem, Christmas came to Lo-Debar. Small, misshapen Mephibosheth—alone, disinherited, abandoned—received the benefit of the covenant and was ushered into the king’s presence because David was a faithful covenant-keeper. Our God is a faithful covenant-keeper. In Jesus, we’re moved from exile into the palace. We have the Eternal King’s forgiveness, our inheritance is restored, and we fellowship with the King of kings.

Mephibosheth is a portrait of what Christmas brings to us. Long ago your Heavenly Father made a blood covenant. Your elder brother, the Lord Jesus Christ, sealed it with His blood and brought you into a relationship with God, now and for eternity.

Are you aware of all you now have?

When you celebrate Christmas, when you see the lights, see the child in the manger, and hear the carols and the laughter, remember: had God not kept His covenant, you’d still be, spiritually speaking, eating dust in Lo-Debar.

Two thousand years ago, God became flesh (John 1:14). This Christmas season, understand the saving power of the blood covenant Jesus made for you.