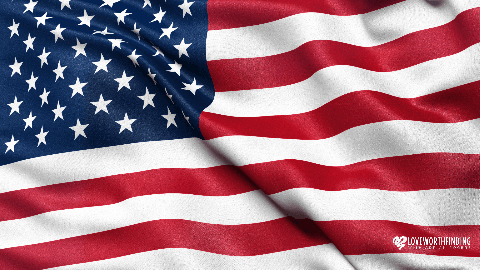 "Righteousness exalteth a nation:  but sin is a reproach to any people."

America’s only hope is found in this verse. Our nation had a godly founding. It has had a glorious past. But if the Lord tarries, what kind of nation will our children inherit?

Alexander Hamilton said, “People get the government they deserve.” If we want to know what’s wrong with our nation, we need to look in the mirror. Something has happened in America since 1776.

It appears that most Americans believe the economy is the top issue. But I had rather leave my children and grandchildren the legacy of a godly nation than great wealth to be squandered in a godless society. No, righteousness is our greatest need.

You cannot have true liberty without true righteousness, men and women living responsibly under God as citizens of both His kingdom and this great country. Righteousness and liberty are inextricably interwoven. Why is this? Let me explain.

What’s true for individuals is true for a nation, because a nation is composed of individuals. We will have more liberty—or less—in direct proportion to our character. When we lose character—righteousness—then we will lose liberty. People who cannot live responsibly from within must be governed from without.

America became great because the nation was born in a revival. “The Great Awakening” swept the land in the 1700s in a flame of righteousness. Out of that, schools were built, principles taught, and character became strong. A nation was born that declared her independence from England and upon almighty God.

Our Founding Fathers knew the best government was the least government, and the more character the citizens have, the more responsibility they will assume, and the less government you’ll need. Real liberty always comes from within. Without righteousness, our republic cannot work.

James Madison, fourth President of the United States, said, “We have staked the whole future of American civilization not upon the power of government. Far from it. We have staked the future upon the capacity of each and all of us to govern ourselves and to sustain ourselves according to the Ten Commandments of God.”

But today, Madison, the architect of the Constitution, would find the Ten Commandments labeled “unconstitutional” and removed from classroom walls.

And when government takes over, whatever it subsidizes, it must control. An example is our education system—subsidized by government—which has gradually outlawed God in our schools. In place of the Ten Commandments, we have values clarification, the glories of the welfare state, one-world government and a new world order. Hitler said in 1920, “Give me the minds of the children, and in one generation I will give you the Fascist super state.” So in our public schools, the Bible is out and humanism is in.

As far back as 1983, The Humanist magazine stated, “The battle for humankind’s future must be waged and won in the public school classroom by teachers who correctly perceive their role as the proselytizers of a new faith. The classroom must and will become the arena of conflict between the old and the new, the rotting corpse of Christianity and the faith of humanism.” Classrooms became Humanism’s newly designated “Sunday School.”

Sin is a reproach to any people.

The great American dream has begun to dissolve because of sin. Far from thanking God for what He’s done, America is self-indulgent and out of control. Erosion of character, sexual permissiveness, perversion, the disposal of unwanted, unborn children, break-up of the family, obsession with material things and craving for pleasure—all have created citizens who relinquish more responsibility to the government. And the people fail to realize the government can’t give them anything it doesn’t first take away from someone else.

When we come to depend upon the government to feed us, it will control us. And then it is free to oppress us. Sure as night follows day, when government provides, it assumes more authority and begins to regulate. The weak character of the people has permitted a totalitarian government. Liberty will last only as long as character and responsibility last.

You say, “But we still have a lot of blessings here in America.” Yes, we do. But the blessings we enjoy are the residual blessings our forefathers left us. We’re living in the shadows of an age. And our liberties are fast receding over the horizon.

It is time we awakened in America. Our Constitution was written by people of character, for people of character. Government is not here to meet your needs. It’s to protect the citizenry from tyranny and punish evildoers. Since you and I cannot raise an army, government must provide for the common defense. Our forefathers said that our government is to “provide for the common defense, promote the general welfare.” Not “provide the general welfare.” When we begin to see the government as a cow to be milked rather than a watch dog to be fed, we’re in trouble. Give us a land where freeborn Americans can go out and do what the Bible says: work. For “if a man will not work, neither shall he eat” (2 Thess. 3:10)

Righteousness exalts a nation, sin is a reproach and humiliation, but revival brings restoration.

Revival is the restoration of a nation.

“When the righteous are in authority, the people rejoice.

But when the wicked bear rule, the people mourn.” Proverbs 29:2

We must take America back. America’s new birth of freedom will come when we have the character our Founding Fathers had. God is our only hope.

Now, for revival and restoration, we don’t have to be a majority. We’re light and salt—they penetrate. Salt purifies, heals and preserves. But Jesus said, “If the salt loses its savor, it’s good for nothing but to be cast out and trodden under the feet of men.”

Why so often today is the church of Jesus Christ being walked on, trodden under the feet of men? Because we have become salt without savor.

You hear so much today about “separation of church and state,” a phrase not even found in the constitution. What our Founding Fathers did believe is that there should be no state church, paid for with tax money. But not in their wildest dreams did the Founders ever think about the separation of God and government. No, they wrote, “We are endowed by our Creator with certain inalienable rights,” and we say “One nation under God” and “God bless America.” To say “Don’t mix politics and religion” is like saying put the fish in one barrel and the salt in another! Surely our character must permeate our society. Remember that the Constitution was written by people with character for people of character.

We, the Church, must assume our responsibility. We must set the standard in caring for our own and the widows and orphans. We must train up our children, godly offspring who will take leadership positions and under God lead us to living by godly principles.

Liberty comes when God’s people say enough is enough. It is righteousness that exalts; sin that is a reproach. And it is revival which is the restoration of a nation.