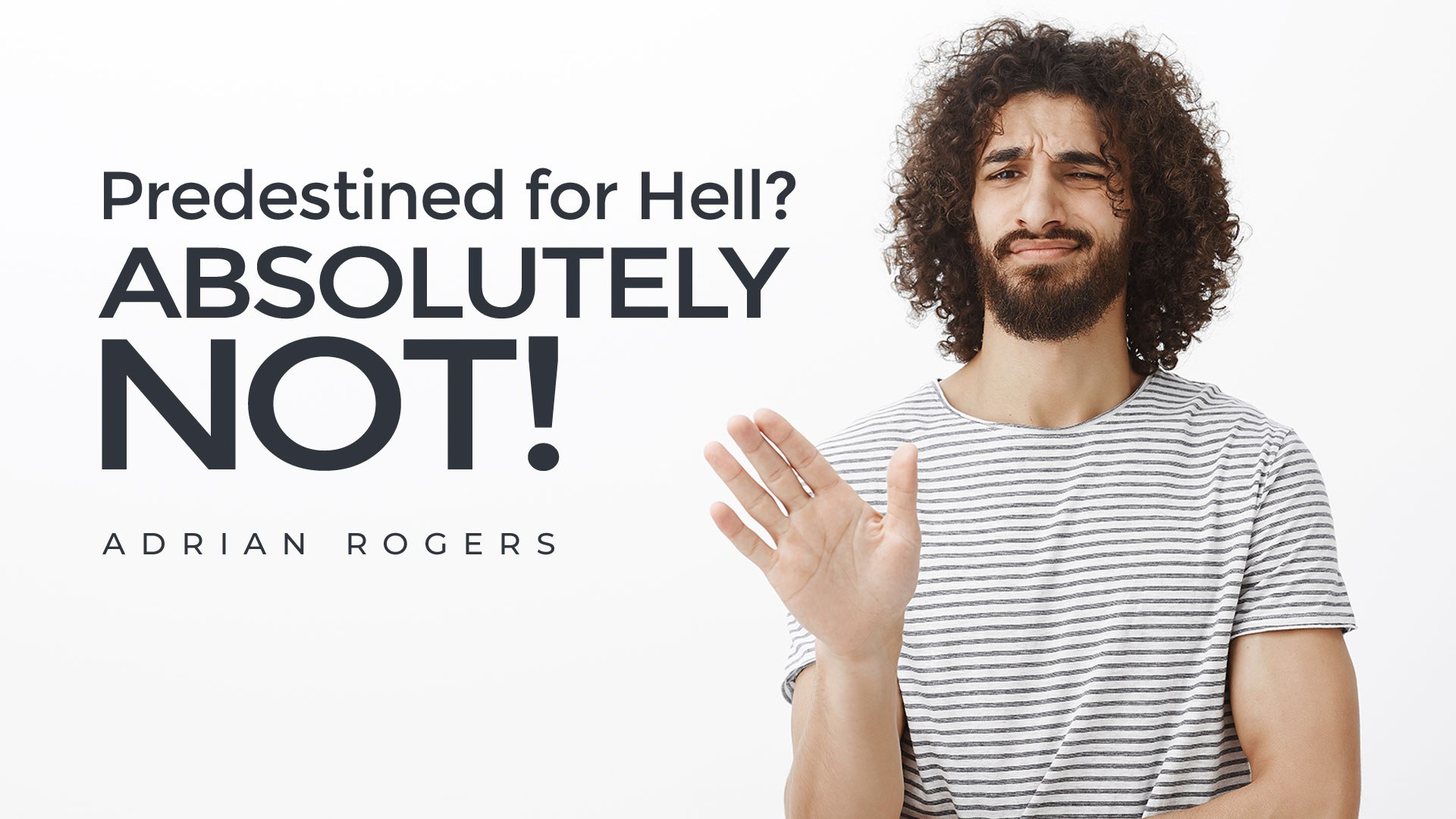 Predestined for Hell? Absolutely Not!

Here’s a somber question. Has God created—predestined, set up—some people to go to Hell, and there’s nothing they can do about it? They’re just pawns on the chessboard of faith? It’s all settled? Is that what the Bible teaches?

We’ll find answers to those questions not by opinion or guesswork but by what God’s Word says. We’ll do this under three important truths:

In Romans 9:1-3, the Apostle Paul’s concern for souls was so sincere, he said, “I would be willing to die and go to Hell if my Jewish brothers and sisters would be saved. I’m willing to take their Hell if they could take my Heaven.” I’m not sure I could say that. That’s sacrifice. That’s exactly what Jesus did on the cross. In these verses, you hear the heartbeat of a soul winner.

In Paul’s letter to the Romans, we learn about the character and nature of God, including whether or not He predestines a person from the start of life for either Heaven or Hell.

When we ask, “Are some people predestined for Hell?”, if we go to His Word, we’re going to learn things about Him that will give us the answer.

Speaking of his kinsmen, the Jews, Paul says God gave them special privileges He didn’t give to other people: a name of honor, an adoption, the covenants, the glory, the law, the service of God, the promise, and above all, the Messiah! (See Romans 9:4-5.)

All these blessings were initiated by God Himself for His chosen people, set apart for His service, requiring His proactive movement toward them. They didn’t choose themselves. God chose them, beginning with Abraham, whom He called out from a pagan society to be set apart for God Himself.

But Paul points out that God didn’t choose every child of Abraham. Of his two sons, God sovereignly chose Isaac to be the line that would bring forth the Messiah. Then, of Isaacs’s two sons, Paul narrows down God’s sovereign choice even further. (See Romans 9:10-13.) God chose Jacob, not Esau.

Some people will be unsettled by verse 13, where Paul quotes the prophet, Malachi. (See Malachi 1:2-3.) When God chose one of them over the other, “Before these children were born, having done neither good nor evil,” someone will ask, “Now, wait. You’re telling me before they were born, God said, ‘I love this one, and I hate that one?’ God chose one to go to Heaven and one to go to Hell?”

No, that’s not what it says. God was speaking of two separate nations. When Rachel was carrying twins, Jacob and Esau, Scripture says “two nations” were in her womb (See Genesis 25:23.), who would be at war with one another. God isn’t talking about one boy or another boy, about two little babies. God is talking about two whole nations. It doesn’t say anything about saved or lost; It’s not about salvation, but service. It’s national, not personal.

Better translated in today’s English, this verse says, “I have preferred one, not that I abhor the other,” or “I chose Jacob instead of Esau.” It simply means preference. God had a sovereign preference for Jacob, flowing from His initiative. He didn’t have a preference for Esau. It doesn’t mean “Esau, I created you to go to Hell. I hate you.” God didn’t arbitrarily hate Esau.

Earlier, Paul established this truth about God: “But God demonstrates His own love toward us, in that while we were still sinners, Christ died for us” (Romans 5:8).

We were utterly sinful when Jesus died for us. We weren’t trying to “clean up our act” when Jesus went to the cross. Had we done anything to cause God to say, “I think I’ll redeem that one”? No.

Beloved, let us love one another, for love is of God; and everyone who loves is born of God and knows God. He who does not love does not know God, for God is love. In this, the love of God was manifested toward us, that God has sent His only begotten Son into the world, that we might live through Him. In this is love, not that we loved God, but that He loved us and sent His Son to be the propitiation for our sins.

We can say definitively:

God pardons according to His sovereign will, completely apart from our merit: “…not by works of righteousness which we have done, but according to His mercy He saved us…” (Titus 3:5) because God is merciful.

But he who trusts in the Lord, mercy shall surround him (Psalm 32:10).

He who covers his sins will not prosper, but whoever confesses and forsakes them will have mercy (Proverbs 28:13).

If you want mercy, you can have it. By God’s sovereign will, He decided He will show us mercy when we don’t deserve it. God says, “If you’re saved, you’ll be saved by grace. It’s not because you will Me to be merciful to you. It’s because I will it.”

In Romans 9:17-18, Paul mentions Pharaoh, wicked ruler of Egypt, to show what can happen when you spurn God’s mercy and go your own way. God had raised Pharaoh to the highest earthly throne, but in Exodus chapters 8 and 9 Pharaoh made his own choices.

Nine times Pharaoh hardened his heart before God. God didn’t override Pharaoh’s will. God sent Moses to warn him. God sent plagues. Pharaoh chose for himself. He was a wicked, cruel despot who murdered thousands of people. His heart was set against God, whose judgments only crystallized Pharaoh in his sin. The only reason Scripture says God hardened Pharaoh’s heart is because Pharaoh had already hardened his own heart.

What about your heart? You could make the same choice Pharaoh did—harden your heart. “Today, if you will hear His voice, do not harden your heart” (Hebrews 3:15). If
you do, like Pharaoh, you will crystallize in your sin.

Eventually, God destroyed Pharaoh because he wouldn’t accept God’s patience or His warnings. God has every right to punish sin. He will give us mercy if we want mercy. But if we harden our hearts, God will say, “Okay, since you insist, not My will, but yours be done.”

You’re not a hapless victim. God didn’t create rebellion in your heart. God works with you like a potter shaping a vessel. (See Romans 9:20.) Still, some won’t take His shaping. But it doesn’t have to end there for anyone.

When you realize God is just, then His mercy toward you is going to mean something! God does as He pleases, but He always pleases to do right. There is no unrighteousness with God. Paul explains that God waited with patience so He could make known His rich glory to all of us. (See Romans 9:23-24.) We receive His mercy. He has prepared us to have His glory. We are the people God has called.

Some people think God said, “People are just helpless, insensible clay, and I’m the Potter. So I’ll just take a lump of clay and make one vessel for Heaven and the other for Hell. Nothing you can do about it.”

Is that the God of the Bible? What potter would ever make a vessel just so he could destroy it? Can you imagine a potter making a bunch of vessels, setting them on a shelf, then breaking one group into pieces? Did He set out to do that? Of course not. God did not ordain some people to Hell.

The Bible tells us repeatedly that God is holy; thus, He cannot sin. There are some things God cannot do, and sin is one of them, because to sin would be to deny His own character. He cannot deny Himself nor act in a way that violates His character. In His choices, He cannot and will not choose to do wrong.

God is holy, righteous, and just in all His ways. God doesn’t create people to damn them or destroy them! He is a God of love.

For this is good and acceptable in the sight of God our Savior, who desires all men to be saved and to come to the knowledge of the truth.

To the Jews, God says, “You haven’t cornered the market on this. I’m going to take people who aren’t part of Israel or the covenant promises and include them. (See Romans 9:25-29.) He’s speaking of us, the Gentiles, making both Jews and Gentiles children of God.

So, what have we found? Are some people predestined for Hell? Or does God want all people saved—and He created no one to go to Hell? The Bible answers:

For God so loved the world that He gave His only begotten Son, that whoever believes in Him should not perish but have everlasting life. For God did not send His Son into the world to condemn the world, but that the world through Him might be saved (John 3:16-17).

All we like sheep have gone astray; We have turned, every one, to his own way;
And the Lord has laid on Him [Jesus] the iniquity of us all (Isaiah 53:6).

How many? Again, all.

And He Himself is the propitiation [sacrifice that takes away our sins] …and not for ours only but also for the whole world (1 John 2:2).

Some people say Jesus didn’t die for the whole world, but these verses say He did!

God’s steadfast concern is that He wants you to be saved. And if you want to be saved, He will save you today. He will keep you and present you spotless before His throne.

Predestined for Hell? Absolutely Not! (2065)