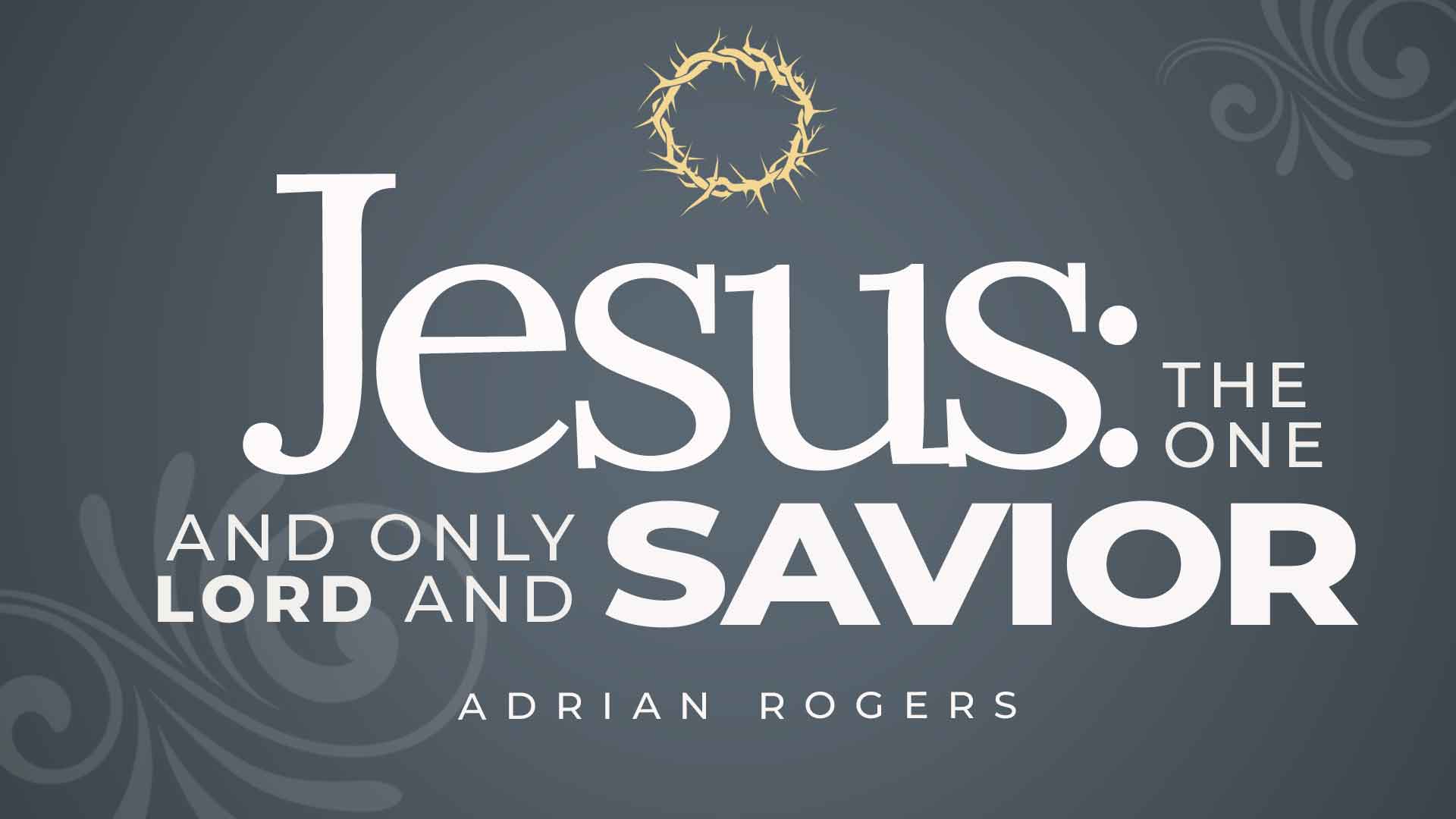 Jesus: The One and Only Lord and Savior


This article is based on Pastor Adrian Rogers' message, Jesus: The One and Only.

What is the big deal about Jesus? He has attracted a combination of attention, devotion, criticism, adoration and opposition like no other person in the history of the world.

Every one of Jesus’ words recorded in the Bible has been analyzed, scrutinized, and memorized. He lived 20 centuries ago, but every single second, millions of people are studying what He said.

He was born in a feeding trough, yet His birth divides B.C. (Before Christ) from A.D. (Anno Domini, or, the year of our Lord). Every time you write the date on something, you are acknowledging the birth of our Lord and Savior Jesus Christ.

While on Earth, as far as we know, He never traveled far out of Israel. Yet, from pole to pole and around the equator, Jesus is magnified and worshiped. He started with a handful of disciples—today, 31% of the world’s population names the name of Christ Jesus.

Only Jesus Reveals the Father

“For it pleased the Father that in Him all the fullness should dwell” (Colossians 1:19). Jesus is “the image of the invisible God, the firstborn over all creation” (Colossians 1:15).

God is unseeable. Because He is infinite, He is unknowable. Because He is holy, He is unapproachable. There is no way we could come to or understand God by reason, religion or ritual. We have to know God by revelation. Somebody has to take us by the hand and introduce us to God, and Jesus alone does this.

Jesus said, “All things have been delivered to Me by My Father, and no one knows the Son except the Father. Nor does anyone know the Father except the Son, and the one to whom the Son wills to reveal Him” (Matthew 11:27). You can know God as Creator, as sovereign—that is, you can know about Him. But you cannot know Him, and have intimate fellowship with Him, except through Jesus Christ, the son of God.

What does the word image mean, in Colossians 1:15? It comes from the Greek word icon. It means “an identical and exact replica.” Jesus is the visible image of the invisible God. “For in Him dwells all the fullness of the Godhead bodily” (Colossians 2:9). All of God is in Christ.

Jesus is the God-man. He is both God and man at the same time. The Word, the Logos, was made flesh and dwelt among us. (Read John 1.) He was not God masquerading as a man. He was a man as much as any human man. He was fully human, and fully divine. The God-man.

Colossians 1:15 also says Christ is “the firstborn over all creation.” This does not speak of time; it speaks of status. Firstborn here means the chief, the highest of the high. He never had a beginning. “In the beginning was the Word, and the Word was with God, and the Word was God" (John 1:1). He always was, always will be. He is the great I AM. (See Exodus 3:14; John 8:58.) God said of Jesus, “I will make him My firstborn, the highest of the kings of the earth" (Psalm 89:27; see whole chapter).

Only Jesus Rules the Universe

“For by Him all things were created that are in heaven and that are on earth, visible and invisible” (Colossians 1:16a). Jesus made every angel and every tree. The baby in Matthew 1 is the mighty God of Genesis 1. The baby in the manger was the God who spoke the Universe into existence.

Are you a “Christian who believes in evolution”? You ought to be ashamed of yourself.

If the Scriptures cannot tell you where you came from, how will they tell you where you are going? What about the destiny of the species? If Genesis 3 is a myth, then John 3 is a farce. If you believe in evolution, you will have trouble with salvation. But no! Man was created in perfection, he fell into sin, and he needs to be redeemed. We get that redemption by Jesus Christ, the only Savior of the world.

It is the Lord Jesus Christ who rules the Universe. He is the power of creation, and its preserver. “He is before all things, and in Him all things consist” (Colossians 1:17). Billions of stars in the Universe, planets orbiting, cells with nuclei and neutrons and protons, and everything else—what keeps all of that together? By Jesus, all things consist. If He were to take His hand off it, it would all come apart.

Eastern religions believe that life is circular—if you didn’t do it right the first time, you get another chance. But the Bible teaches that history is linear, that we are headed toward a climax, a purpose. It was all made for Jesus. The kingdoms of this world will become the kingdoms of our Lord and His Christ, and He shall reign forever. (See Revelation 11:15.)

Only Jesus Reconciles the Lost

“For it pleased the Father that in Him all the fullness should dwell, and by Him to reconcile all things to Himself, by Him, whether things on earth or things in heaven, having made peace through the blood of His cross” (Colossians 1:19-20).

As Paul is writing Colossians, see how he is setting this up: he is showing the magnificence, the deity of Jesus. Image of the invisible God, firstborn of creation, Creator of everything, the one to whom it is all coming. And then Paul says Jesus died on a cross.

God, the mighty maker, died for man, the creature. It is Christ’s deity that makes His death meaningful. He made the world with a word, but He saved it with His precious blood.

If you had one word to describe God, it would not be Love; it would be Holy. God will punish sin—your sin. Your sin will either be pardoned in Christ, or punished in Hell, but it will never be overlooked.

Man’s estate was lost by a man, and it had to be regained by a man. The fullness of God dwells in Christ. When He came down to our side of the chasm and put on absolute manhood, He took our sin upon Him. By His blood, He made peace between God and man.

Does Jesus say we are saved by faith alone?