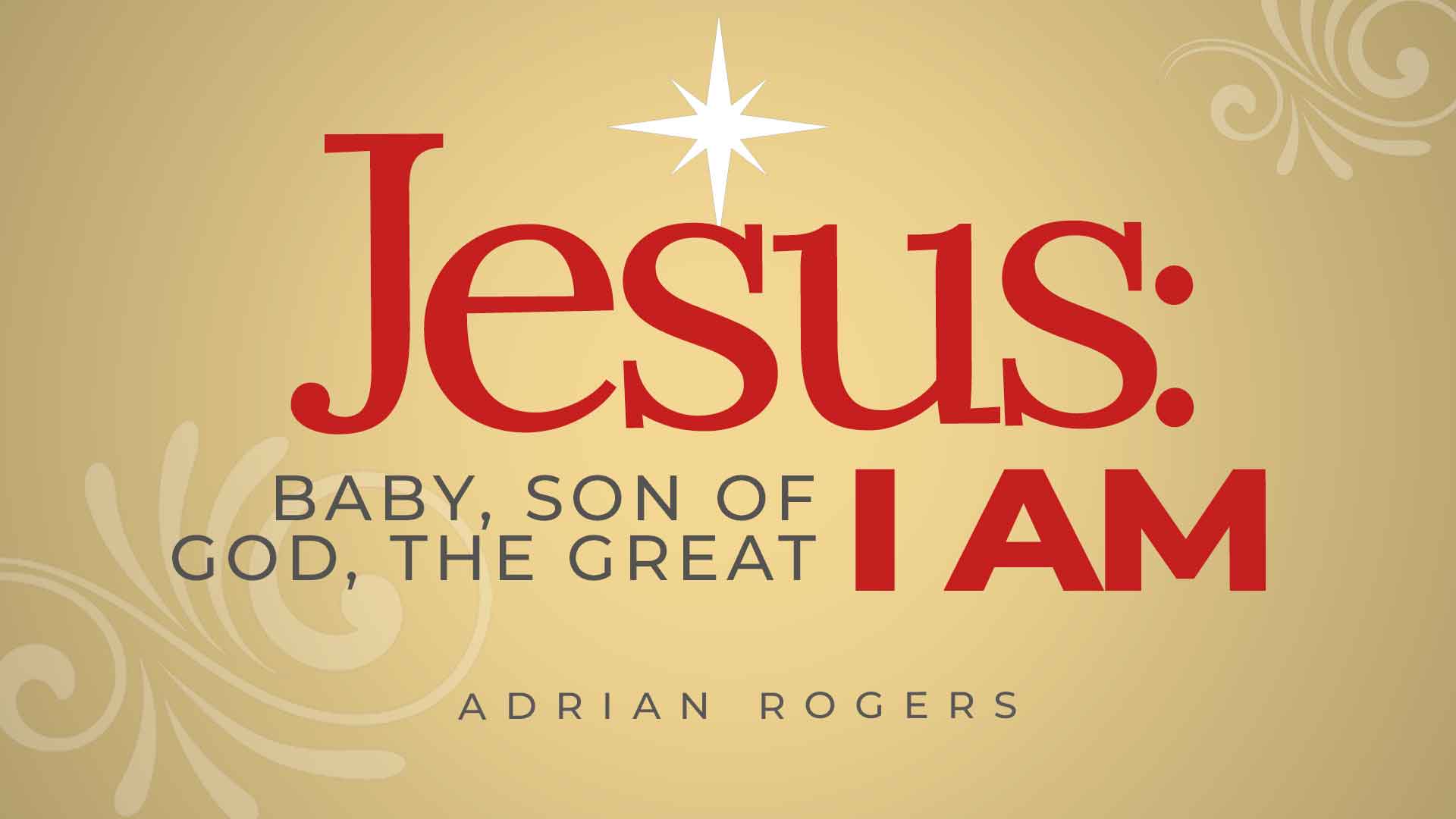 Jesus: Baby, Son of God, the Great I AM


This article is based on Pastor Adrian Rogers' message, What Child is This?.

Who is this baby Jesus we celebrate at Christmas? This question is the one upon which your eternal destiny hangs. You dare not be wrong about this.

There are many wrong answers, but the one most often assumed is, “Jesus was a great moral teacher.” C.S. Lewis wrote,

Either this man was, and is, the Son of God, or else a madman or something worse. You can shut Him up for a fool, you can spit at Him and kill Him as a demon or you can fall at His feet and call Him Lord and God, but let us not come with any patronizing nonsense about His being a great human teacher. He has not left that open to us. He did not intend to. (C.S. Lewis, Mere Christianity)

What Is the Holy Trinity?

We do not worship three Gods, but one God who has revealed Himself in three persons.

God revealed something about Himself to Moses: He has no beginning, and no ending. “God said to Moses, ‘I AM WHO I AM.’ And He said, ‘Thus you shall say to the children of Israel, “I AM has sent me to you”’” (Exodus 3:14; emphasis original).

When Jesus taught in the Temple, He said to the Pharisees, “‘Your father Abraham rejoiced to see My day, and he saw it and was glad.’ Then the Jews said to Him, ‘You are not yet fifty years old, and have You seen Abraham?’ Jesus said to them, ‘Most assuredly, I say to you, before Abraham was, I AM’” (John 8:56-58; emphasis original).

In Acts 5, Ananias and his wife, Sapphira, sold a piece of property. Wanting to be praised and flattered, they came to Peter and said, in effect, “We’re giving everything we got from that property to the church.” (See Acts 5:1-2.)

But Peter knew they were lying. He said, “Ananias, why has Satan filled your heart to lie to the Holy Spirit and keep back part of the price of the land for yourself?…You have not lied to men but to God” (Acts 5:3,4b). Lying to the Holy Spirit is lying to God.

The Mystery of the Trinity

We know about the Trinity only because God revealed it to us in Scripture.

You will not know this by philosophy, logic, or investigation. You cannot understand infinity, or eternity. You can’t even understand how beautiful flowers come out of black dirt—but you accept it.

The Majesty of the Trinity

Each person of the Trinity is God.

Who created everything in the beginning? “In the beginning God created the heavens and the earth” (Genesis 1:1). Ipso facto, Jesus is God.

The Hebrew word for “God” in Genesis 1:1 is Elohim, which is plural. It is paired with a singular verb—literally, In the beginning Gods made heaven and earth. “Then God said, ‘Let Us make man in Our image, according to Our likeness’” (Genesis 1:26a).

“Hear, O Israel: The LORD our God, the LORD is one!” (Deuteronomy 6:4). The Jews use this verse to say, “See, you can’t have a Trinity—there’s only one LORD.” But the Hebrew word here for “one” is ehad, meaning “one as a unity.”

God is the eternal, everlasting Father. That means there never was a time when He was not a father. And for Him to be an eternal Father, He must have an eternal Son.

“Who has established all the ends of the earth? What is His name, and what is His Son’s name, if you know?” (Proverbs 30:4b).

“For unto us a Child is born, unto us a Son is given; and the government will be upon His shoulder. And His name will be called Wonderful, Counselor, Mighty God,
Everlasting Father, Prince of Peace” (Isaiah 9:6; emphasis added). The phrase “mighty God” comes from the Hebrew el gibor, which means God-man. That is the Lord Jesus, the son of God.

The Christmas story begins with the Trinity. The angel said to Joseph, “Do not be afraid to take to you Mary your wife, for that which is conceived in her is of the Holy Spirit. And she will bring forth a Son, and you shall call His name JESUS, for He will save His people from their sins” (Matthew 1:20b-21).

And the Gospel of Matthew ends with the Great Commission. Jesus said, “Go therefore and make disciples of all the nations, baptizing them in the name of the Father and of the Son and of the Holy Spirit” (Matthew 28:19).

“He was in the world, and the world was made through Him, and the world did not know Him….But as many as received Him, to them He gave the right to become children of God, to those who believe in His name” (John 1:10,12).

Selected by the Father

Before the foundation of the world, God selected His believers. If He had not chosen you, you never would have chosen Him. “He chose us in Him before the foundation of the world, that we should be holy and without blame before Him in love, having predestined us to adoption as sons by Jesus Christ to Himself, according to the good pleasure of His will” (Ephesians 1:4b-5).

Saved by the Son

God chose us “to the praise of the glory of His grace, by which He made us accepted in the Beloved. In Him we have redemption through His blood, the forgiveness of sins, according to the riches of His grace” (Ephesians 1:6-7). Jesus is this Beloved through whom we are accepted.

“…According to the riches of his grace.” Grace means you don’t earn it. Salvation is not for sale. Through the blood of Jesus, our sins are taken away forever.

Sealed by the Holy Spirit

“Having believed, you were sealed with the Holy Spirit of promise, who is the guarantee of our inheritance until the redemption of the purchased possession, to the praise of His glory” (Ephesians 1:13b-14). This kind of “seal” means a legal document.

We believe in eternal security because we are sealed with the Holy Spirit. Think about Noah—he may have fallen down many times in the ark, but he could not fall out of it, because God had shut him in!

Is Jesus the Son of God?