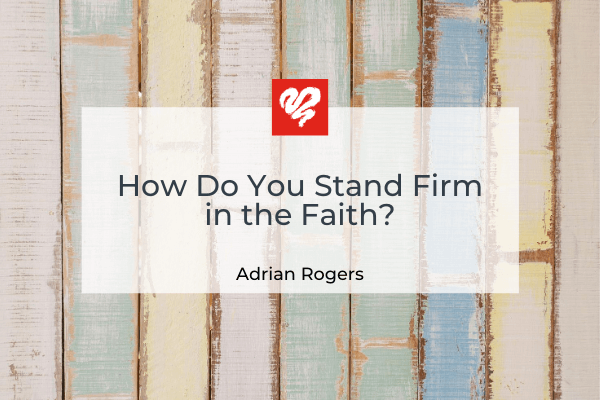 How Do You Stand Firm in the Faith?

Today I see something that disturbs me greatly: America is moving away from its foundation. We no longer agree about basic truths of right and wrong. It’s too hard for some to stand firm in a world becoming increasingly pagan. Pundits proclaim the moral and spiritual foundations of this nation were fraudulent. Many people still believe the Bible is the Word of God and Jesus is our only Savior—but not a majority anymore. The Barna Group, a leading research company, discovered something alarming: “Nearly two out of three adults in America contend that the choice of one religious faith over another is irrelevant.” Why would people say this? “Because they believe all religions teach the same basic lessons about life.”

That should shock us. Increasingly, Americans think Jesus Christ was just a fine moral example, nothing more. Pluralism is promoted as ideal. We should accept all religions as equal—and we’re un-American if we don’t accept all faiths, saying, “Your religion is as good as mine.”

But it’s worse than that. If you say you’re “tolerant” of other beliefs, you’re labeled a bigot, because that implies you don’t totally agree with them. To say we “tolerate” them implies we think something’s wrong with them. We must accept, approve of, and embrace enthusiastically every divergent belief system.

So what are we to do? Wring our hands? Give up? Or be prepared to give a credible response? We must raise the flag of our faith and expect others to believe in the Lord we believe in. Acts 17 tells us Paul did this on one of his missionary journeys as he entered the ancient pagan city of Athens.

Experience Challenges to your faith

Paul was alone, waiting for Timothy and Silas to join him. Walking around the city, his spirit was stirred by its depravity and wickedness. Athens was the cultural and intellectual center of the ancient world. But its most beautiful building, the Parthenon, was dedicated to the sex goddess Athena. Paul saw pagan temples filled with empty people and false teachers peddling narcotics for the soul. The city was filled with cynicism, snobbery, and debate, just like our cities today. But Paul bravely shared the Lord Jesus Christ, though he met with strong resistance.

What happened in Acts 17 is happening now in modern America. History repeats itself. Paganism is inescapable—it’s in our schools, entertainment and media. You must get prepared and get your children prepared to live for Christ within this pagan society.

Creative power (Acts 17:24). He made everything. Therefore, He stands above and distinct from creation.

Personal love. In one of the most beautiful passages of Scripture, Paul explains how from the beginning God created mankind with a hunger to know Him:

Supernatural salvation (v.31). Paul told the Athenians of a Savior who suffered, bled, and died on a cross, was buried, walked out of the grave, and is proved to be the Son of God with power by His resurrection. He’s not ashamed to preach the resurrection of Christ in the center of Athens.

You’ll experience the same when you share Jesus today.

Now while Paul waited for them [Silas and Timothy] at Athens, his spirit was provoked within him when he saw that the city was given over to idols…. Then Paul stood in the midst of the Areopagus [the town center] and said, “Men of Athens, I perceive that in all things you are very religious.” (Acts 17:16, 22)

“Superstitious” is the word the King James Version uses. They were consumed with superstitious idolatry. Pagan idols were everywhere. They worshipped 30,000 false gods. Someone said, “It was easier to find a false god in Athens than it was to find a human being.”

What is an idol? Whatever you heart clings to, loves more, serves more, trusts more, or puts before Almighty God. God will not share His position with some other god in your life. Idolatry is the greatest sin you can commit because it transgresses the greatest commandment. Jesus said,

Our God is a God of infinite love. He loves us. Idolatry the greatest sin because it renounces our very purpose of life. Why do we exist? To know God and love Him. Deep in your heart, you have a desire to know and love Him.

Is there idolatry in modern America? Perhaps more than in ancient Athens. We’ve just given our idols modern names.

Materialism instead of Mammon, the love of money.

Alcohol instead of Bacchus, the god wine and drunkenness.

Sex, lust and promiscuity instead of Venus, Athena or Aphrodite.

Violence instead of Mars, the God of War

Intellectualism, wisdom and knowledge instead of Sophia. We worship at the shrines of our computers and universities.

Romans 1:21-23 describes a society given over to idolatry:

Although they knew God, they did not glorify Him as God, nor were thankful, but became futile in their thoughts, and their foolish hearts were darkened. Professing to be wise, they became fools, and changed the glory of the incorruptible God into an image made like corruptible man—and birds and four-footed animals and creeping things.

What happens to a society consumed by idolatry?

Therefore, God also gave them up to uncleanness, in the lusts of their hearts, to dishonor their bodies among themselves, who exchanged the truth of God for the lie, and worshiped and served the creature rather than the Creator, who is blessed forever. Amen. (Romans 1:24-25)

In America, you can say anything you want against God with no consequences. But if you say something derogatory about a person, you’ll be denounced because we worship the creature (mankind, nature) more than the Creator.

Paul walked into the synagogue where he saw self-righteous orthodoxy (v. 17). He talked with both Jews and Gentile worshipers, “respectable sinners” who looked down on pagans for their superstition. Paul had been this same kind of self-righteous pharisee until Jesus transformed his life. You’ll be challenged by those who may not be idolaters, but they’re unable to see their need for a Savior.

Philosophers of all stripes flocked to Athens. The Epicureans promoted the philosophy of pleasure: “Eat, drink, and be merry, for tomorrow you die.” Stoics decided “Life has no meaning, so just sit back and endure it,” a form of intellectual pride—a sterile ideology that feels no need for God. Both groups saw themselves as intellectual giants, but as someone said, “Philosophy is that system that tells us what we already know in words we can’t understand.” Beloved pastor Dr. R. G. Lee said, “Philosophy is a chunk of cloud bank buttered with the night wind.” Philosophy never satisfies the deepest longings of the human heart.

Express Confidence in Our Faith

Idolatry, orthodoxy, and philosophy work against us when sharing the Gospel. Nevertheless, you can confidently express your faith. Athenians loved to have their ears tickled. They thrived on debate. When they brought Paul to the Areopagus, he took full advantage of a wide-open opportunity to share the Gospel.

If that had been you, what would you say? Would you be prepared? Paul knew religion is a mockery and beauty is vain without the Lord Jesus Christ. He confidently told them about the one true God, standing for the faith in a pagan society, testifying that He is the God of…

And He has made from one blood every nation of men to dwell on all the face of the earth, and has determined their pre-appointed times and the boundaries of their dwellings, so that they should seek the Lord, in the hope that they might grope for Him and find Him, though He is not far from each one of us; for in Him we live and move and have our being. (Acts 17:26-28)

Expect Converts to Our Faith

Yes, there will be challenges, but when you share the Lord Jesus Christ, I can tell you after many years of ministry and preaching, people will be saved. The Gospel has the power to change lives.

Now, expect also that any time you witness, there will be one of three responses, just as they responded to Paul.

Derision. Some will mock and laugh. They laughed at the apostle Paul though he was brilliant. But he was willing to be thought a fool for Christ’s sake. Are you willing to be laughed at for your faith? Many Christians would rather face a lion than face ridicule. What a fearful weapon derision is.

Delay. Some will just put it off. “Perhaps tomorrow. Someday I’ll give my heart to Jesus Christ.” It’s one of Satan’s favorite ways to send a soul to hell.

Decision. “And others believed” (v. 34). I’ve been preaching long enough to know there is power in the Gospel. Not every seed will sprout, but when you preach the Gospel of Jesus Christ, when you show this God to be the God of creation, the God of personal love, the God of salvation, the God who made it all, there’s something in the human heart that will say, “Yes, that is truth, and I accept that truth.”

Delay; don’t turn over and go back to sleep.

Decision; give your heart to Jesus.

God loves you. He wants to save you, and He will save you if you’ll trust Him. Come to Jesus. Do it today.