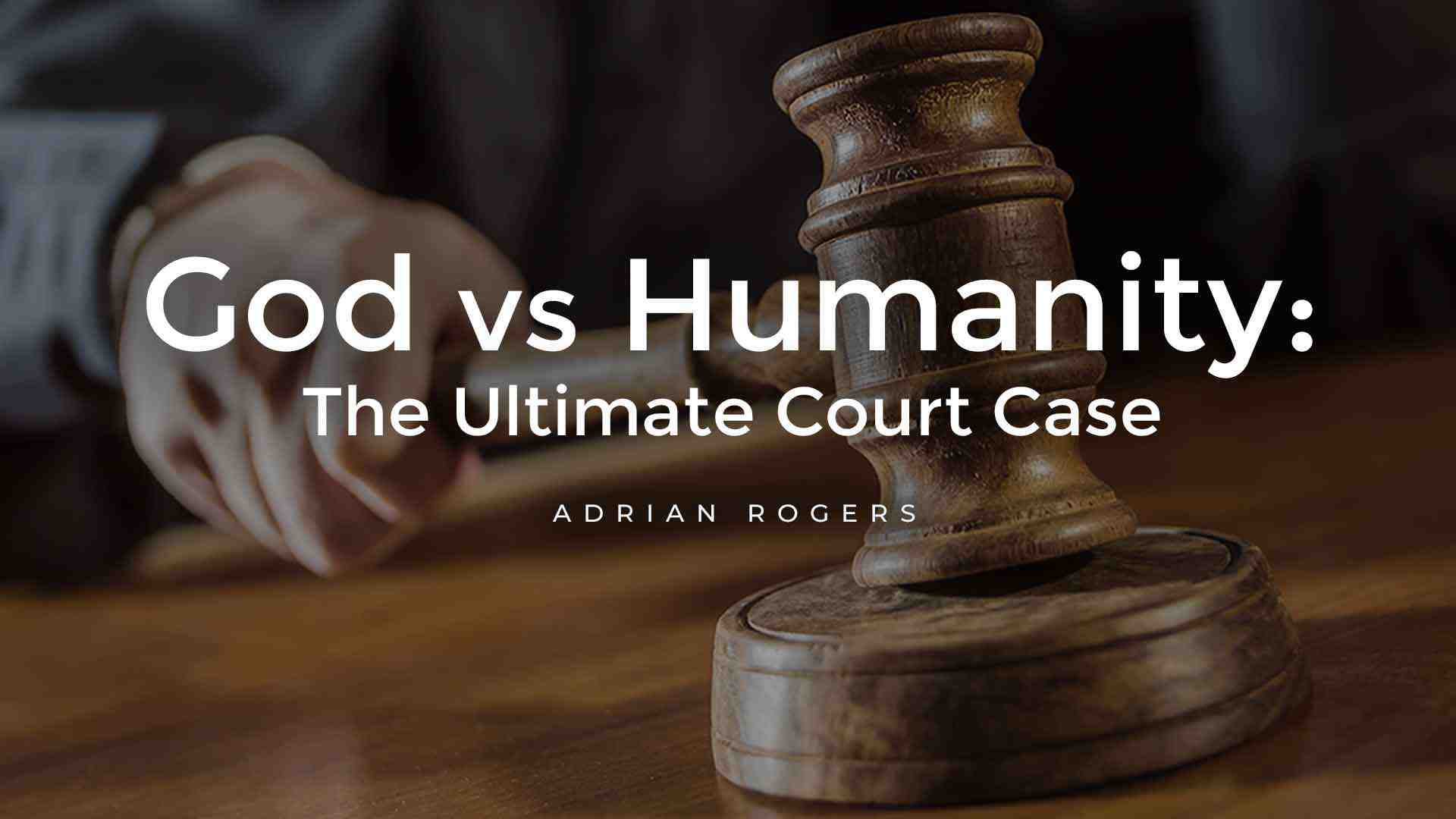 
This article is based on Pastor Adrian Rogers' message, God vs. Humanity.

Something is terribly wrong in our world. You don’t even need a Bible to tell you that. But God didn’t create humanity like this. When God made the world and placed man in it, He looked it over and said, “It’s very good” (Genesis 1:31). What happened? Sin entered the world. But sin is not so much in the world as it is in our hearts—my heart and yours. Life is short, death is sure; sin the curse, Christ the cure. But you won’t get the cure until you have a proper diagnosis.

The Apostle Paul gave that diagnosis in the book of Romans—in my opinion, the greatest piece of literature ever written. Paul begins to tell us in chapter 1 about humanity’s sin. In chapter 2, he addresses the sin of hypocrites and religious people. In chapter 3, he completes the diagnosis and declares, “All have sinned” (Romans 3:23). There’s no difference between the religious and the non-religious. Every one of us falls short of the glory of God.

In these first three chapters, Paul becomes a prosecuting attorney, bringing the human race before the judgment bar of God. The case on the docket is “God vs. Humanity.”

The indictment: all humanity sins.

Paul says it’s not only that we sin, but we serve sin—we’re slaves to sin. We measure ourselves against someone else and say, “I’m not so bad—look at that guy,” when the measuring stick isn’t someone else, but God’s infinite holiness. Whatever our environment or pedigree, we’re contaminated by sin. We’re sinners by birth, nature, and heritage. Sin is an internal issue because it comes out of our hearts. Within every heart lies the seed of sin.

Trying to reform ourselves isn’t enough. A lumberman takes a log from the woods. That tree may be crooked. But he brings it into the sawmill and begins to run it through the mill. The large buzzsaw lops off the edge on one side. He turns it, runs it through again, and lops off the other edge. He turns it again and runs through the third side, then the fourth, and there it is, perfectly straight, perfectly square. But if you look at it from the end, the heart is still crooked.

That’s what reformation does. It squares us on the outside, presumably, but “the heart is deceitful above all things and desperately wicked. Who can know it” (Jeremiah 17:9)?

Sin corrupts every man, woman, and child in fundamental ways.

Our imaginations are sinful; our deductions are false. We cannot know or understand God with our natural mind. (See 2 Corinthians 2:14.) In spiritual matters, mankind without God is hopelessly ignorant of how sinful he is and how holy God is. The average person thinks he can go to Heaven without being born again.

Paul said to Rome, with all of its gods, “There is none who seeks after God” (Romans 3:11). How could Paul say this when all over the world man builds temples to gods? Even in jungles, you’ll find idols. Answer: they aren’t seeking God, they’re in demon worship: “The things which the Gentiles sacrifice, they sacrifice to demons and not to God” (1 Corinthians 10:20).

Instead of seeking the true God of Heaven, they’re fleeing from Him. Ever since Eden, man has been running from God. When Adam sinned, he hid from God when He came calling, “Adam, where are you?” It wasn’t Adam calling, “Oh, God, where are You?” It was the voice of a brokenhearted God, seeking Adam.

If God couldn’t run faster than you, you’d never have been saved. But He caught you. The only reason you sought God, the true God, is that He first sought you. (See 1 John 4:19.)

If you hunger to know God today, it’s because the Holy Spirit is drawing you. The person doing the seeking is God.

A sheep never says, “Oh, I’m lost—I’ve gotta go back to the shepherd.” If the shepherd doesn’t go find him, he will never come home.

Romans 3:13-14 reveals what God thinks about our unsanctified words:

“Their throat is an open tomb; with their tongues, they have practiced deceit. The poison of asps [serpents] is under their lips, whose mouth is full of cursing and bitterness.”

Words expose what’s down in our hearts. (See Luke 6:45.) In the country, they say, “What’s down in the well comes up in the bucket.”

Read any newspaper today and you’ll see the truth of Romans 3:15-16, “Their feet are swift to shed blood; destruction and misery are in their ways.” Violence, child abuse, abortion, war—man’s wickedness has turned this world into a madhouse.

Here is God’s crowning indictment against man:
“There is no fear of God before their eyes” (Romans 3:18).
“The fear of the Lord is the beginning of wisdom, and the knowledge of the Holy One is understanding” (Proverbs 9:10).

“Fear of God” is reverence, holy awe, love on its knees before Almighty God. Our generation has lost that. You’d think humanity would be prostrate on the ground, crying, “Oh, God, have mercy!” Not this generation nor the prior one—egomaniacs, headed for Hell, laughing about God.

He doesn’t ask a jury. He is the Judge, rendering the verdict in Romans 3:19, “…that every mouth may be stopped, and all the world may become guilty before God.”

The law wasn’t given to save you. It cannot save you. It was given to condemn and convict—to show you you’re a sinner. Sin transgresses God’s law. We realize God gave His holy law, and we’ve fallen short. The wisest thing you could do today, Paul advises, is “Close your mouth and plead guilty.”

You will never be saved until you admit your guilt before God. In Luke 18, two men went to the temple to pray—a Pharisee and a sinner. The Pharisee bragged about his superior goodness. The other man prayed, “God have mercy on me, a sinner.” Jesus said the sinner went home justified and forgiven.

We want to strut to Heaven, but here’s the verdict of the court: “All have sinned.” The Pharisee went home dignified but unforgiven. You can come into God’s presence two ways, but only one results in forgiveness.

Not until we admit our sin will we know God’s mercy and forgiveness. Don’t ever get the idea that God is “fair.” God is not fair. We think fairness means we get what we’re rightfully owed. That would only be fair, right? Until you understand the justice of God, His holiness, and your guilt—that we deserve judgment—you will never have the good sense to plead “God have mercy” and ask forgiveness. Thank God, He doesn’t give us what we deserve; from His mercy, He gives us what we don’t deserve.

That is the Gospel. Why doesn’t God just overlook sin? Why not just say to all, “That’s okay, come on up to Heaven”? Because God will be true to His own honor. Because sin must be paid for. Sin is an affront to a holy God, and if God were to let sin go unpunished, He would topple from His throne of holiness. They say in a court of law, “When a guilty man is acquitted, the judge is condemned.” But God has provided the way out for us.

Because of Calvary, Jesus paid the full price. God can forgive our sin and remain just, “to demonstrate at the present time His righteousness, that He might be just and the justifier of the one who has faith in Jesus” (Romans 3:26).

God doesn’t overlook our sin, He pardons it by His grace through the sacrifice of His Son on the cross.

if you’re not saved, it’s my solemn duty to tell you there’s no other way for you to be saved. You cannot be saved by your good deeds. “…if righteousness comes through the law, then Christ died in vain” (Galatians 2:21).

God is just, but He is a God of mercy and grace. Through the cross, He will save you.

Know this: your sin will either be pardoned in Christ or punished in Hell, but it will never be overlooked. You decide. God wants you to be saved.

God vs. Humanity Outline and Transcript