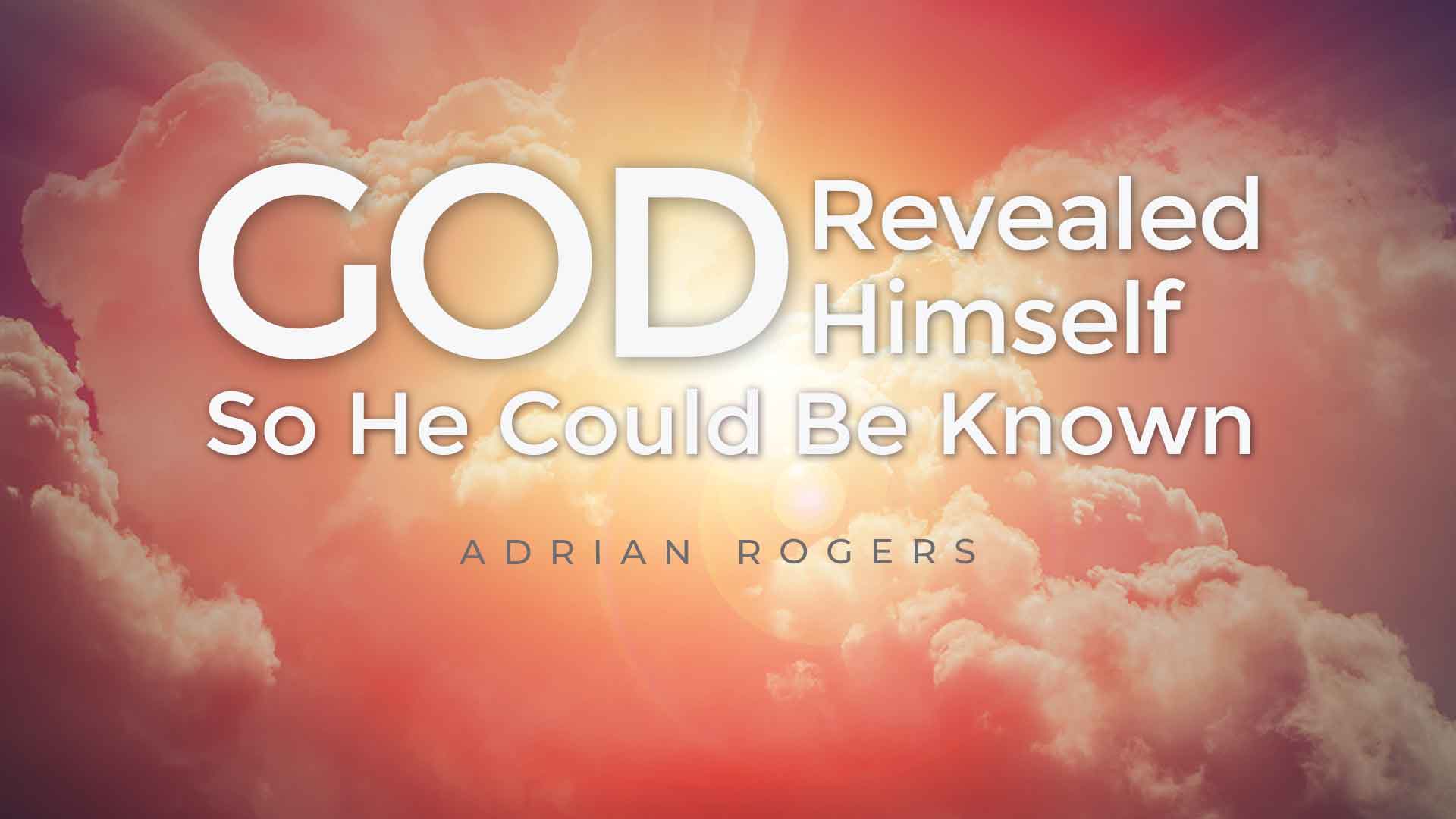 God Revealed Himself So He Could Be Known


This article is based on Pastor Adrian Rogers' message, An Old Testament Portrait of Jesus.

An Old Testament Prophecy of Jesus

Galatians 3:8 tells us the Gospel was preached to Abraham—though he lived centuries before Christ was born on Earth. When Abraham and Isaac went up Mount Moriah for a special offering in Genesis 22, it was an Old Testament prophecy of the death, burial, and resurrection of Jesus Christ.

Isaac, the son of Abraham, was a picture of Jesus Christ in the Old Testament, and here is how:

His birth was prophesied.

The LORD came to see Abraham. Scripture says, “Now Abraham and Sarah were old, well advanced in age; and Sarah had passed the age of childbearing. And the LORD said to Abraham, “….Is anything too hard for the LORD? At the appointed time I will return to you, according to the time of life, and Sarah shall have a son” (Genesis 18:11,13-14).

This was a miracle birth, and it was prophesied—just as the Lord Jesus was born of a miracle—the Virgin Birth. (See Isaiah 7:14, Matthew 1:22-23.)

His birth date was set.

And of Christ, the Bible says, “When the fullness of the time had come, God sent forth His Son, born of a woman” (Galatians 4:4a).

He was named before birth.

Jesus, too, was named before He was born. “And she will bring forth a Son, and you shall call His name JESUS, for He will save His people from their sins” (Matthew 1:21).

He was called a beloved only son.

“Now it came to pass after these things that God tested Abraham, and said to him….‘Take now your son, your only son Isaac, whom you love, and go to the land of Moriah, and offer him there as a burnt offering on one of the mountains of which I shall tell you’” (Genesis 22:1-2).

What does that remind you of? “For God so loved the world that He gave His only begotten Son…” (John 3:16a).

Three days after God told Abraham to offer Isaac up, Abraham saw Mount Moriah from afar. (See Genesis 22:4.) In Abraham’s heart, Isaac was as good as dead for three days—just as Christ was three days and three nights in the grave. (See Mark 10:33-34.)

The Bible says that Abraham did this in faith, “concluding that God was able to raise [Isaac] up, even from the dead, from which he also received him in a figurative sense” (Hebrews 11:19, word in brackets added; Read Genesis 22:9-13.)

Can you see how Isaac pictures Jesus? God put this prophecy of Jesus in the Old Testament to show that Calvary was not accidental—it was in God’s heart before He created the Universe. (See 1 Peter 1:20-21, Revelation 13:8.)

God did not tell Abraham to take Isaac to “just any place.” God said, “Go to the land of Moriah.” (See Genesis 22:2.) Moriah means, “foreseen of the LORD.”

Out of this Universe, God chose one galaxy: the Milky Way. God chose one of the planets in it and said, “The earth is the LORD’s” (Psalm 24:1a). On this magnificent globe, God took a little land on the edge of the Mediterranean and called it, “My land.” God chose one city, Jerusalem, the holy city of the king. He took one mountain in that city—“My holy hill.” (See Psalm 2:6.) This is Mount Moriah, where the Temple was built. Mount Moriah is also Calvary, where Jesus died.

So God said, “Abraham, take your beloved miracle son, whom I named and gave to you, to the place I will show you and sacrifice him there.”

Abraham and Isaac started up Mount Moriah. The others with them could not go; Abraham told them, “Stay here with the donkey; the lad and I will go yonder and worship, and we will come back to you” (Genesis 22:5b). This is an Old Testament prophecy of Gethsemane, where Jesus went alone with the Father. (Read Matthew 26:36-46.)

“So Abraham took the wood of the burnt offering and laid it on Isaac his son; and he took the fire in his hand, and a knife, and the two of them went together” (Genesis 22:6). Isaac went up Mount Moriah carrying his cross, as it were.

“Then they came to the place of which God had told him. And Abraham built an altar there and placed the wood in order; and he bound Isaac his son and laid him on the altar, upon the wood” (Genesis 22:9). Isaac was a strapping teenage boy. Abraham was now well over a hundred years old. Isaac could have outrun him, or wrestled him to the ground. But he did not refuse to be a sacrifice—just as Christ said in Gethsemane, “Not as I will, but as You will” (Matthew 26:39b).

Abraham was about to plunge that knife into the beating breast of his son.

But the Angel of the LORD called to him from heaven and said, “Abraham, Abraham!....Do not lay your hand on the lad, or do anything to him; for now I know that you fear God, since you have not withheld your son, your only son, from Me.” Then Abraham lifted his eyes and looked, and there behind him was a ram caught in a thicket by its horns. So Abraham went and took the ram, and offered it up for a burnt offering instead of his son (Genesis 22:11-13).

That knife did not fall upon Isaac, because one day it would fall upon Jesus.

Now the scene shifts: Isaac is now a picture of us. There he is, destined to receive the knife. But God says, “Get up. Here is a substitute—sacrifice Him instead.” Abraham saw a ram caught by his horns in a thicket. Who is He? The Lamb crowned with thorns! What a description of Christ in the Old Testament.

Here is the promise: “And Abraham called the name of the place, The-LORD-Will-Provide; as it is said to this day, ‘In the Mount of the LORD it shall be provided’” (Genesis 22:14; emphasis added). On this same Mount, God would provide Himself a Lamb. Now you understand why Jesus said, “Abraham rejoiced to see My day” (John 8:56b).

An Old Testament Portrait of Jesus (2016)

What verses in the Old Testament prophesy about Jesus Christ?