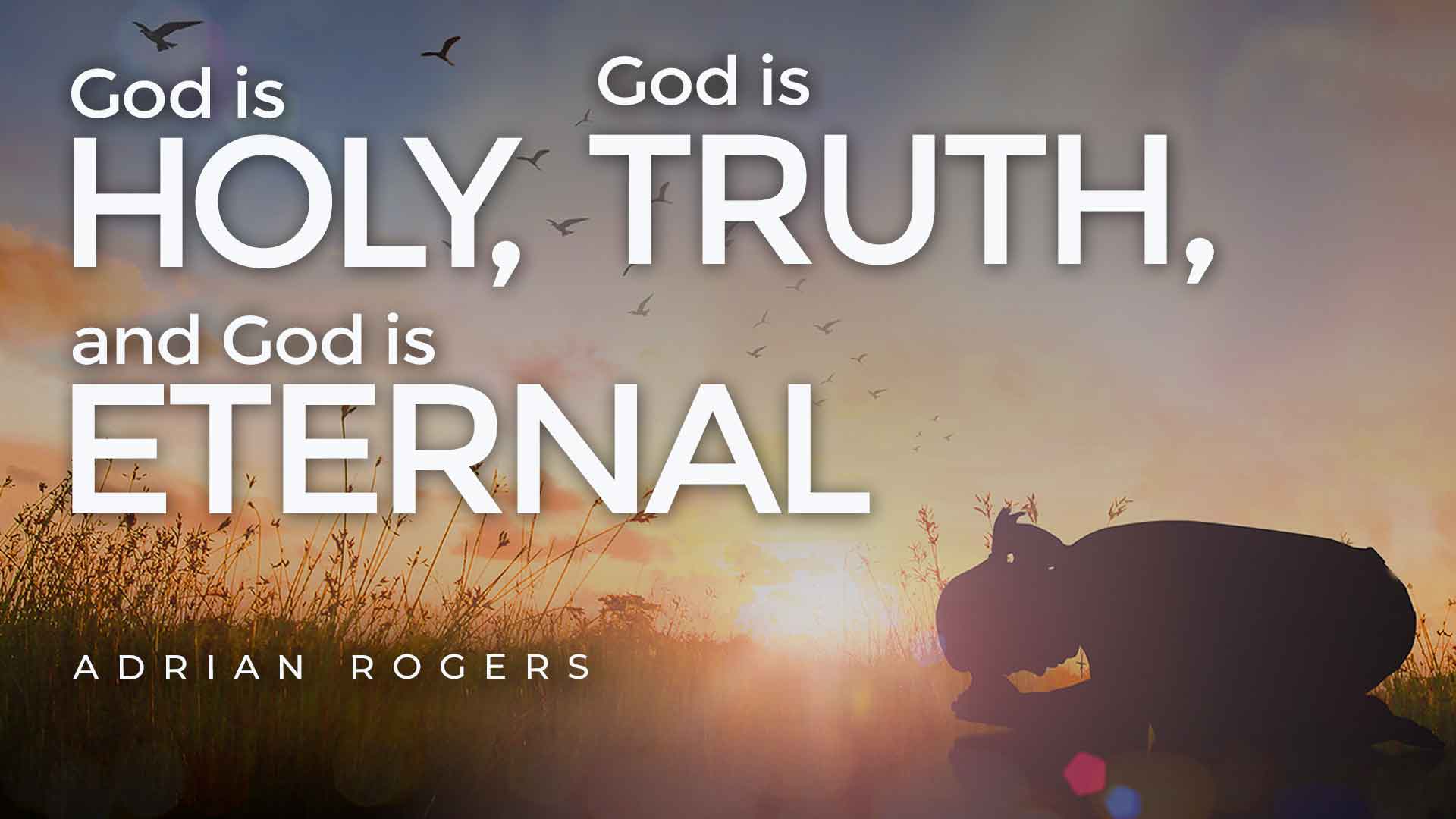 God is Holy, God is Truth, and God is Eternal


This article is based on Pastor Adrian Rogers' message, The One True God.

There is only one true God—the triune God of the Bible. The prophet Isaiah once saw the Lord.

The One True God is Triune

We do not worship three gods. We worship one God revealed in three persons—God the Father, God the Son, and God the Holy Spirit.

This may be the hardest Christian concept to grasp. But denying the Trinity is at the root of many heresies. Can a finite human understand the infinite? Not by investigation, logic, or philosophy. Concepts like the Trinity (and God’s omnipresence, eternity, etc.) are not contradictory to logic; they are beyond logic. (See Isaiah 40:18.) The only way to know God and understand the Trinity is by divine revelation.

Reflections of God’s triune nature are in His Creation. For example, time. The past, present, and future are not the same, but you cannot have one without the others. “Space” is height, width, and depth—distinguishable, but inseparable. God created man with a body, soul, and spirit—separable, but part of a unit (and made in the image of God).

What does the Old Testament say about the triune God?

“In the year that King Uzziah died, I saw the LORD sitting on a throne” (Isaiah 6:1a). “Lord” here is Adonai, a name for God only.

“And one [seraph] cried to another and said: ‘Holy, holy, holy is the LORD of hosts; the whole earth is full of His glory!’” (Isaiah 6:3; word in brackets added) This is a different name, meaning Jehovah of hosts.

“Also I heard the voice of the Lord, saying: ‘Whom shall I send, and who will go for Us?’” (Isaiah 6:8a; emphasis added) Here is the Holy Trinity acting in concert.

The Trinity is in the Bible’s opening verse. “In the beginning God created the heavens and the earth” (Genesis 1:1). The Hebrew word here for God is Elohim. The “im” ending is plural. Elohim is not three gods, but one God who is plural in nature.

“Then God said, ‘Let Us make man in Our image, according to Our likeness’” (Genesis 1:26a). Was He speaking to angels? No—we aren’t made in the image of angels. (See Genesis 1:27.) This was the triune Godhead, taking counsel together.

Who created everything? The triune God.

“In the beginning God created the heavens and the earth” (Genesis 1:1). That is God the Father.

Jews think it is blasphemy to believe in the Trinity, because of the Shema: “Hear, O Israel: the LORD our God, the LORD is one!” (Deuteronomy 6:4).

The One True God Magnifies the Son

Let’s look at the Old Testament prophecies of the Messiah.

Once, three Hebrews were thrown into a fiery furnace. But when the King looked in—“‘Look!’ he answered, ‘I see four men loose, walking in the midst of the fire; and they are not hurt, and the form of the fourth is like the Son of God’” (Daniel 3:25). It was the Son of God.

“Who has ascended into heaven, or descended?....What is His name, and what is His Son’s name, if you know?” (Proverbs 30:4; emphasis added)

“For unto us a Child is born…And His name will be called Wonderful, Counselor, Mighty God, Everlasting Father, Prince of Peace” (Isaiah 9:6). “Mighty God” is from el gibor, which literally means God-man. You cannot accept the full deity of Jesus unless you accept the Trinity.

How does the New Testament treat Jesus?

“All things have been delivered to Me by My Father, and no one knows the Son except the Father. Nor does anyone know the Father except the Son, and the one to whom the Son wills to reveal Him” (Matthew 11:27).

The One True God is Holy

The perfect character of God is His holiness. Holiness means that God will punish sin.

These seraphim are angels. They cover their eyes, because God is too holy for them to look upon. They cover their feet, because they are ashamed to stand before His presence. We think of God as some glorified grandfather or “The Man Upstairs.” But He is the thrice-holy God of Israel, and you have no concept of God until you see that!

The One True God Saves

In the chapter before this, Isaiah came down on sin with six “woes.” Now, he sees God, and there is another woe.

“So I said: ‘Woe is me, for I am undone! Because I am a man of unclean lips, and I dwell in the midst of a people of unclean lips; for my eyes have seen the King, the LORD of hosts’” (Isaiah 6:5; emphasis added). If you are not falling on your face before God, you have a serious problem.

“Then one of the seraphim flew to me, having in his hand a live coal which he had taken with the tongs from the altar. And he touched my mouth with it, and said: ‘Behold, this has touched your lips; your iniquity is taken away, and your sin purged’” (Isaiah 6:6-7). Coal from an altar—where blood sacrifices were burned. This was a prophecy of Jesus’ blood, which cleanses us from all sin. (See Hebrews 9:22; 1 John 1:7.)

If you do not see God as a God of love, grace, and forgiveness, you have missed the one true God. There is only one way to know this one true God—through the blood of the Lord Jesus Christ. (See John 14:6-7.)

Are Jesus and God the same?