Fathers Who Teach Their Children to Be Wise 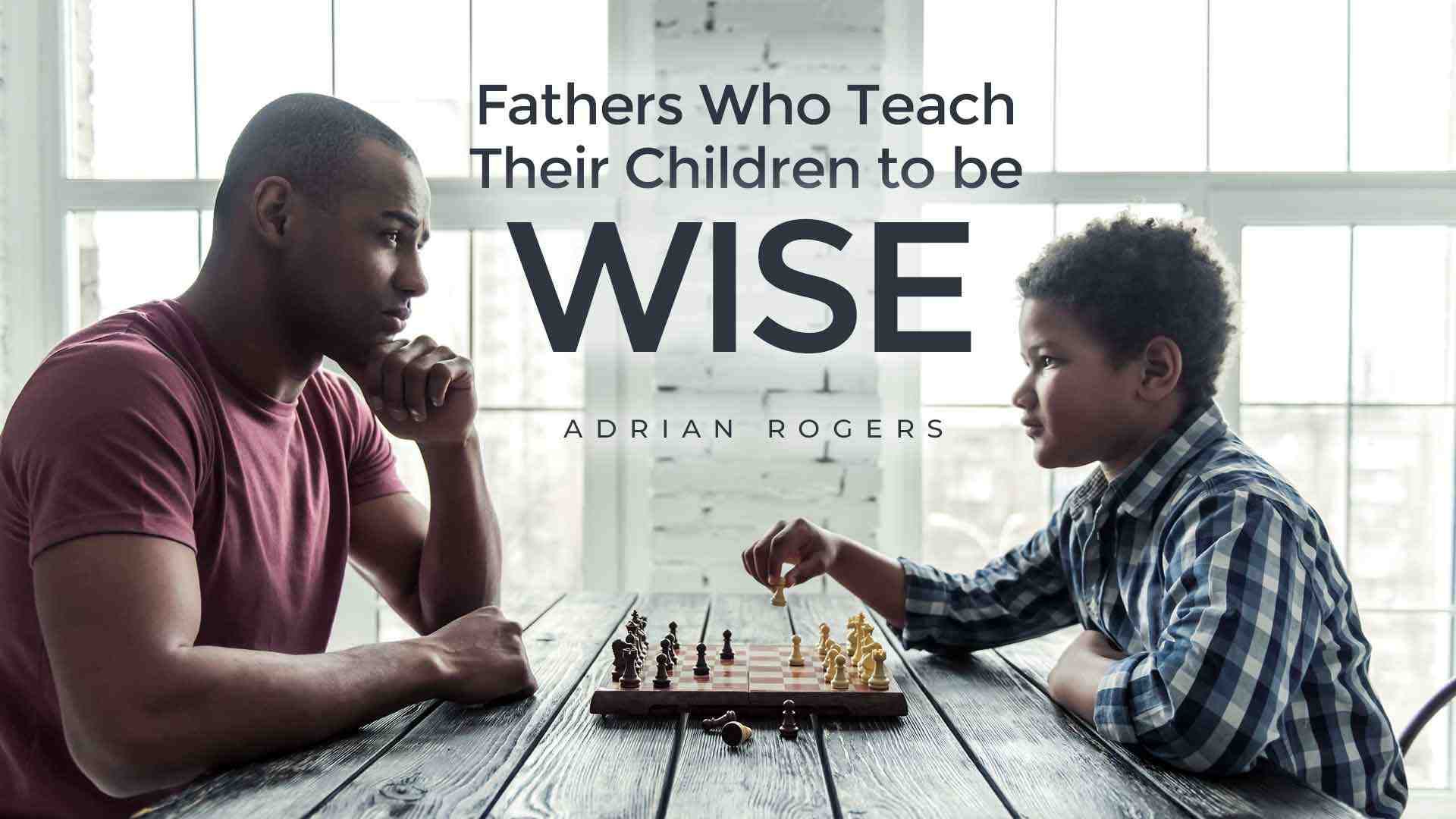 Why do some children adore their fathers and others hate them? What’s the difference between fathers? Sometimes children are caught up in the mistakes and mindset of fathers who won’t do what they should to guide those children into a safe, secure haven. The fathers’ own pride and arrogance make shipwreck both of their own lives and their children’s. It doesn’t have to be this way.

I’ve observed one characteristic in almost all fathers whose children love and follow them. I’ll tell you what it is in a moment.

The book of Proverbs is a veritable owner’s manual on how to raise a wise child. From the first chapter, it says the proverbs were written, in large part, so we would come…

…to know wisdom and instruction, to perceive the words of understanding, to receive the instruction of wisdom, justice, judgment, and equity; to give prudence to the simple, to the young man knowledge and discretion—A wise man will hear and increase learning, and a man of understanding will attain wise counsel…. Wisdom calls aloud outside; she raises her voice in the open squares. She cries out in the chief concourses, at the openings of the gates in the city she speaks her words: “How long, you simple [naïve, immature] ones, will you love simplicity? For scorners delight in their scorning, and fools hate knowledge. (Proverbs 1:2-5; 20-22)

Underline three words in this passage: simple, scorners, and fools. A child isn’t born a scorner or a fool. A long road leads to the evolution of a fool.

Children need your guidance and protection.

They lack understanding. There comes a time when the child must be guided from innocence into wisdom and maturity.

They can be quickly led into error. A child is an easy target for Hollywood, false religions, and sinful friends. They’re so open, they’ll believe anything. They’re like a sponge. They can be tricked and misled; they’re living in constant danger, sitting ducks for bad influences.

“The simple believes every word...” (Proverbs 24:15). “A prudent man foresees evil and hides himself: but the simple pass on and are punished” (Proverbs 22:3).

The young tend to think they’re indestructible, not weighing the future, easy to mislead.

Look at the word “scorner.” Little children aren’t scorners yet but heads up, dads: the older children, if not guided by dad and mom, take the next step down—they become the scorners/scoffers.

They get their jollies from being the smart-alecky kids, the teenage cynics, the mockers at the university. It breaks my heart to say it, but most teenagers in America now are scorners. Scorners can break a parent’s heart.

They defy instruction because “scorners delight in their scorning” (Proverbs 1:22).
“A wise son heeds his father’s instruction, but a scoffer does not listen to rebuke” (Proverbs 13:1).

Scorners will fire back at you. (See Proverbs 9:8.) They won’t listen. It’s like talking to a brick wall—they’ll tune you out. “A scoffer does not love one who corrects him, nor will he go to the wise” (Proverbs 15:12).

He’ll never come and say, “Dad, I need help. Will you help me out?” When you try to correct the scorner, he’ll look at you and say with his eyes, “I hate your guts.”

They’re on a track for destruction.
“He who despises the Word will be destroyed” (Proverbs 13:13).

If they laugh at the Word of God, they may laugh their way right into Hell. Scorners are very hard to reach, but there is yet hope; they can still be reclaimed.

Catch them before they self-destruct.

First, there was the simple—naïve, open, carefree. But if he’s not taught, he will become a scorner. We all carry that fallen nature. Then the scorner, if not restrained by parents, becomes a person the Bible designates “a fool.” The scorner is insolent, but the fool is immovable—rebellious, arrogant, and wicked.

A fool will reject wisdom.
“And fools hate knowledge” (Proverbs 1:22).

“The heart of him who has understanding seeks knowledge, but the mouth of fools feeds on foolishness” (Proverbs 15:14).

This is why we have sitcoms that laugh at drunkenness, glorify adultery, mock marriage, promote homosexuality and relish perversion. Who does that? Fools.

He rejoices in iniquity.
“Folly is joy to him who is destitute of discernment…” (Proverbs 15:21).

His moral sense is so perverted, he calls good evil and evil good. His heart is hardened, his conscience is seared, and his mind is defiled.

He rejects reproof.
God will chasten those who are His own. “For whom the Lord loves, He chastens…” (Hebrews 12:6). But reproof and correction are lost on a fool. “Rebuke is more effective for a wise man than a hundred blows on a fool” (Proverbs 17:10).

Trying to reprove the fool will get you nowhere. Don’t even try. He won’t hear you. He is intransigent. If he were wise, he would repent when God chastised him.

God gives us little children who begin life innocent and open. But if you’re not careful, society will turn them into smart alecks.

Dad, if they’re not rescued when they become scorners or smart alecks, they’ll become fools. The fool is on the fast track to Hell.

We’re in serious trouble in America. In 1962, prayer in public schools was declared unconstitutional. In 1963, Bible reading in schools was deemed “unconstitutional,” but in 1973 the killing of pre-born children somehow became a Constitutional “right.” Then in 1980, the Ten Commandments had to be removed from where they were posted on school walls because, they said, “The child might be tempted to follow them.”

Secular humanists have proven to be great strategists. They latched onto the one segment of life almost every child will pass through—public school—and targeted it to become their “Sunday School” for humanist philosophy. To do that, they had to purge any vestige of Christian influence.

In light of this attack on your children, how can you be the father of a wise child and keep from raising a fool?

Dads, with everything in modern culture fighting against you, you must gear up for this battle.

7 Ways to Be the Father of Wise Children:

Saturate them in the Proverbs. Emblazon the Ten Commandments onto their consciousness. Teach them the Beatitudes, that they might learn these simple, basic truths. It’s your God-given responsibility (See Deuteronomy 6:6-9.) to teach these commandments to your sons, daughters, and grandsons, that your family will survive and your home endure.

The battle is for the mind. As the child thinks, so is he. Get a memorization plan going and make it fun, with rewards when children commit scheduled verses to memory. Get the Word down into their hearts early.

The young and innocent will learn by example when they see discipline fall upon the scorner. Children need to see what happens when sin is exposed and consequences are suffered.

The worst thing would be for your child to live in a sinful society where he never sees the repercussions of sin. Our children today are insulated; often they don’t see the result of sin. Help them understand. Don’t just expound truth, but expose sin. Take your child down to skid row. Take him to the prisons. Let him see the end result of bad choices.

“Strike a scoffer, and the simple will become wary; Rebuke one who has  understanding, and he will discern knowledge” (Proverbs 19:25).

The young think they’re indestructible. You need to pull back the veil.

Do not let your children hang around with scorners and fools. Just don’t do it. Help them select their friends. That means you may have to be firm and “cast out the scorner.” Show them the door. Impressionable children will succumb to peer pressure.

Open up your house to your child’s friends. Make your home the headquarters for fun. And while they’re there, you can monitor those friends. Peer pressure is not bad if the peers are good. If there’s a smart aleck or a fool, say, “Son, there’s the sidewalk.”

“Cast out the scoffer, and contention will leave; Yes, strife and reproach will cease” (Proverbs 22:10).

Moms and dads, underline this, a good verse for memorization:

“He who walks with wise men will be wise, but the companion of fools will be destroyed” (Proverbs 13:20).

Love your children! Delight in them.

“For whom the Lord loves He corrects, just as a father the son in whom he  delights” (Proverbs 3:12).

Be positive. Avoid negativism. Words can hurt your children more than a slap in the face. Learn to listen. Try to see life from their point of view. They’re facing things you never faced.

This is that one characteristic I mentioned at the beginning, which I’ve seen in all dads whose children love and follow them: They are gentle. That’s what children want out of their dad. Yes, they want a dad they can look up to, who’s the strongest, wisest, smartest, fastest, best dad in the world…but they want him to be gentle! Touch them, hug them, give them non-verbal affection.

Let them know your fears, joys, disappointments, failures, and goals. They already know you’re not perfect; they don’t want you to be a phony.

Make it a priority that you’re available to your child.

If you feel inadequate—so do I. None of us has what it takes to be this kind of dad. That’s why we need Jesus.

We’ve got to have Christ in our hearts! The Christian life is not difficult, it’s impossible. Only one who can do it, and that’s Jesus.

But He will do it, in and through us, if we’ll let Him. The best thing you can do for your children is to love God with all your heart. Give your heart to Jesus.