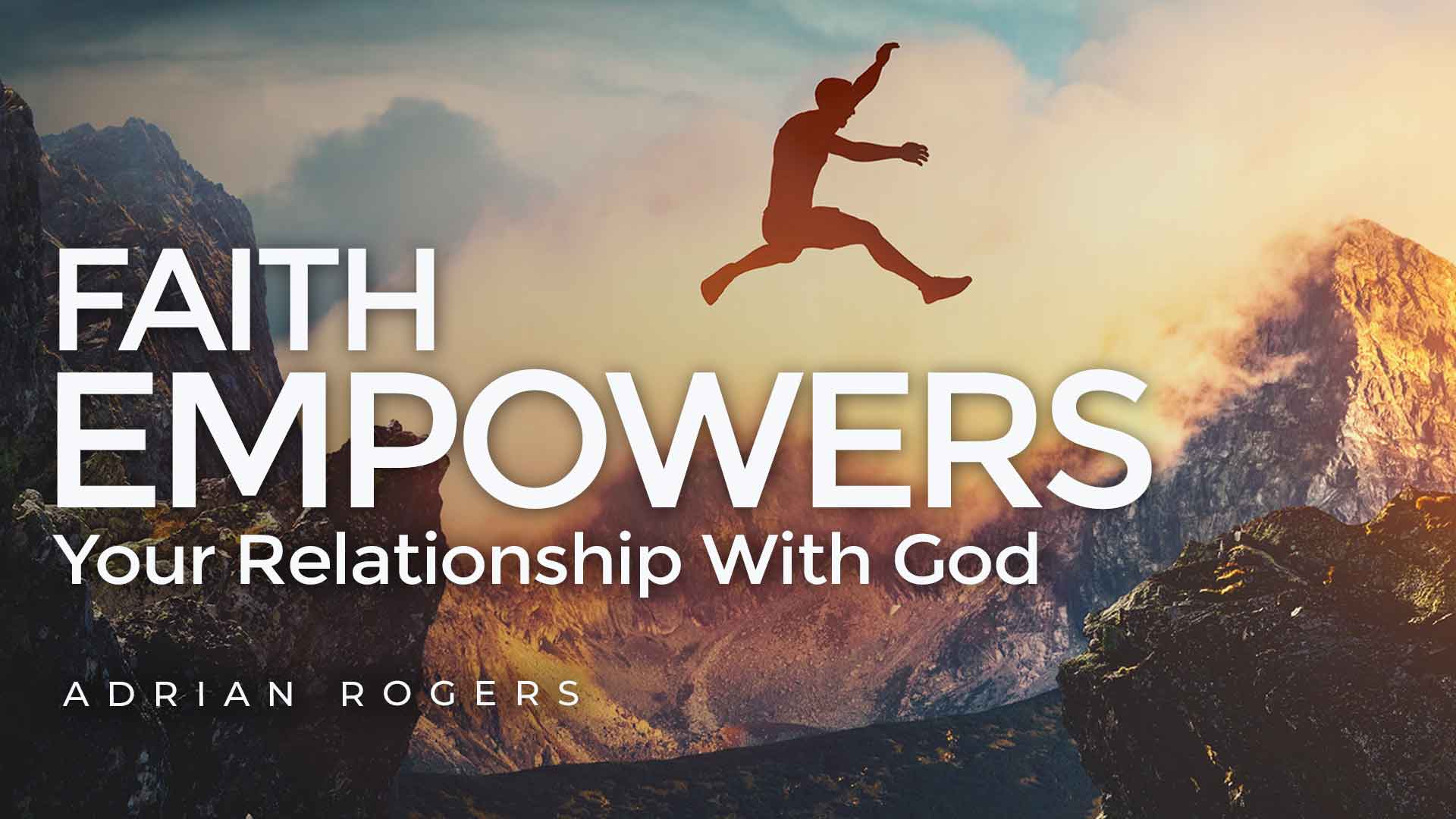 Faith Empowers Your Relationship With God


This article is based on Pastor Adrian Rogers' message, Having Strong Faith.

The blessings and spiritual growth we receive from God are not according to our family, fortune, feelings, or “fate.” Christ said, “According to your faith let it be to you” (Matthew 9:29b; emphasis added). Would you like to know how to build a relationship with God? “Without faith it is impossible to please Him” (Hebrews 11:6a).

Here is a story about a man who had weak, uninformed faith. But he went from weak faith to saving faith in Jesus Christ.

So Jesus came again to Cana of Galilee where He had made the water wine. And there was a certain nobleman whose son was sick at Capernaum. When he heard that Jesus had come out of Judea into Galilee, he went to Him and implored Him to come down and heal his son, for he was at the point of death. Then Jesus said to him, “Unless you people see signs and wonders, you will by no means believe” (John 4:46-48).

This nobleman’s thoughts were, “God, just give me sign, and I can believe.” He did not depend on the Word of God. Doubtless, he had heard that Jesus turned water into wine. So he came seventeen miles from Capernaum, thinking, “Anybody who can turn water into wine can heal my son.”

But Jesus knew that signs and wonders are very little good in strong faith. Turn back two chapters: “Now when He was in Jerusalem at the Passover, during the feast, many believed in His name when they saw the signs which He did” (John 2:23).

Well, isn’t that good? “But Jesus did not commit Himself to them, because He knew all men” (John 2:24). They believed in Jesus, but He did not believe in them and their superficial faith.

Jesus did perform miracles. We cannot take that out of the Word of God, nor should we wish to. But why did He perform miracles? To authenticate His ministry, so that we might believe and have eternal life. (Read John 20:30-31; Acts 2:22.)

But that is not the program for the whole age. God has given us something better than signs and wonders.

Why did Jesus rebuke this nobleman, and why did He say, “An evil and adulterous generation seeks after a sign”? (See Matthew 12:39.)

Later, Jesus appeared to him. “Then He said to Thomas, ‘Reach your finger here, and look at My hands; and reach your hand here, and put it into My side….Thomas, because you have seen Me, you have believed. Blessed are those who have not seen and yet have believed” (John 20:27a,29).

It was okay for Thomas to believe after seeing a sign, but he missed the blessing of simply believing the Word of our Lord.

The antichrist, the Beast, the devil incarnate, is coming—and how will he authenticate his ministry? Signs and wonders. (See Revelation 13:14; 2 Thessalonians 2:9.) Jesus said, “For false christs and false prophets will rise and show signs and wonders to deceive, if possible, even the elect” (Mark 13:22).

This nobleman moved from weak, superstitious faith to strong, substantive faith, and there were four progressive steps.

Faith is not receiving what you want; faith is accepting what God gives.

This nobleman was trying to tell Jesus what to do—“Come with me to Capernaum.” But Jesus said, “You are not here to demand from Me. You are here to get a word from Me.”

Faith is taking God at His Word. “So then faith comes by hearing, and hearing by the word of God” (Romans 10:17).

2. He believed the Word of God.

“So the man believed the word that Jesus spoke to him, and he went his way” (John 4:50b). It is not enough to hear the Word. If don’t believe it, you will not have faith.

“I just can’t,” you say. Your problem is not intellectual; it is moral. Your problem is in your heart, not your head. Faith is not contrary to reason—it goes beyond reason. God enables a person to believe.

Faith is a response to the character of God. When your heart is right, it will respond to the Word of God in faith. When God speaks through His Word, the Holy Spirit whispers to your heart, “That is true.”

This is what the Bible calls obedience of faith. (See Romans 16:26.) Faith is belief with legs on it.

“For as the body without the spirit is dead, so faith without works is dead also” (James 2:26). If you do not obey the Word of God, you do not have strong faith.

If this nobleman still had superficial faith, he would have stayed there, begging Jesus for a sign. But he left it with Jesus. He did exactly what Jesus told him to, and believed.

“And as he was now going down, his servants met him and told him, saying, ‘Your son lives!’ Then he inquired of them the hour when he got better. And they said to him, ‘Yesterday at the seventh hour the fever left him’” (John 4:51-52).

“So the father knew that it was at the same hour in which Jesus said to him, ‘Your son lives.’ And he himself believed, and his whole household” (John 4:53).

Didn’t he already believe? Yes, but this is different. This man now believed not in a miracle worker, but in a Messiah. This time, he believed in Jesus as his Lord and Savior.

Jesus did not come as a healer; Jesus came as a Savior. (See Luke 19:10.) He didn’t heal everyone. There were many sick people at the pool of Bethesda, but Jesus healed just one. (Read John 5:1-9.) These were miracles that pointed to the greater miracle: new birth. (Read John 3:3-6.)

Believe in miracles, but trust in Jesus.

What’s the difference between being religious and having a relationship?

How do I have a relationship with God?