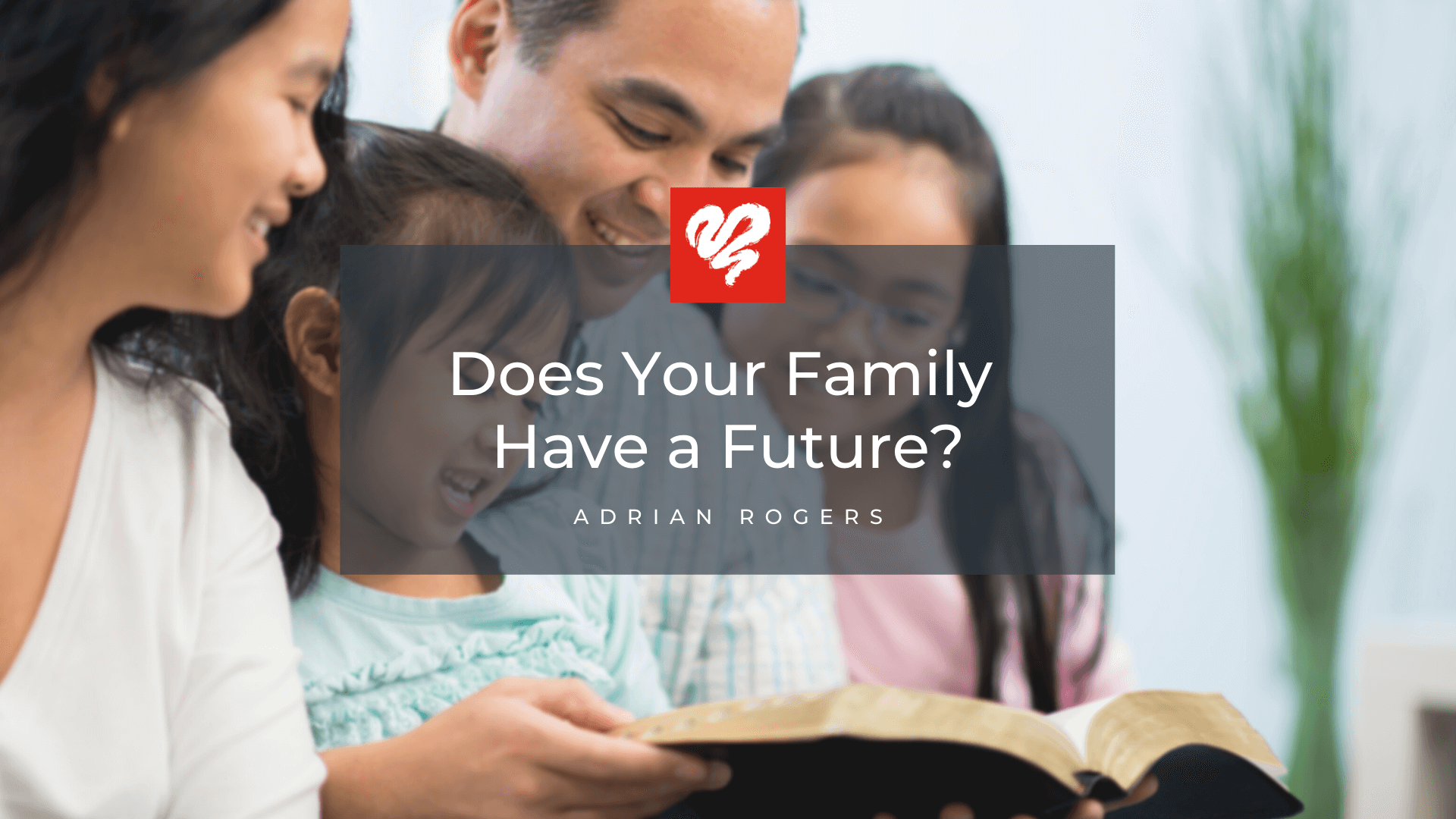 Does Your Family Have a Future?

Do you wish you could live for a moment in the Garden of Eden before Adam and Eve fell? We can have part of Eden with us today, and it’s close to home. In fact, it is home. Images of Eden flash in our vision. Whispers of Eden linger in the walls of our earthly homes. A breeze from Eden wafts by. God established the family in the Garden, and family is the only thing Adam and Eve took with them when they left it. The family, you see, is that part of Eden we can still have on Earth. Your family can have a future, but you must claim it.

Anthropologists want us to believe the family emerged from the ooze of evolution. Up from a gradual evolutionary process, the family rose. But the family began in the heart and mind of Almighty God, the first institution He formed, specifically designed to meet the deepest physical, social, spiritual, and psychological needs of mankind. The family’s importance cannot be overstated. Children need to be born into a family.

A child gets his self-concept from the home. Newborns have no self-consciousness. They don’t know who or what they are. Home is where children learn who they are, what they can do, and what’s expected of them. In their family, children learn a sense of security and confidence—that they are dearly loved and worth something. A child looks into his parents’ faces and sees love. He gets the message: “I’m special because my mother and father love me so.”

The family is society’s basic unit. Therefore, from Eden to this day, Satan has waged an all-out war on the family. Does the family have a future? Will it survive or become extinct like a dinosaur? We fight this war on several fronts at once, both within our nation and without.

More than two decades ago, the United Nations World Conference on Women in Beijing, China, offered “the deconstruction of gender” as a goal to set mankind “free from traditional bias” and “give members of the human family five genders from which to choose instead of two.” Homosexuality was equal in worth to heterosexuality. To free women from male oppression, artificial insemination was the preferred way to conceive a child. Nations came from all over the world to learn this!

Within our own nation, the battle rages on multiple fronts.

The family is the center and the core. Therefore, Satan wages an all-out war against the family.

You can hear the longing in God’s heart for His people in Deuteronomy 5:29: “Oh, that they had such a heart in them that they would fear Me and always keep all My commandments, that it might be well with them and with their children forever!”

In Deuteronomy 5 and 6, God gives five precepts for training children so families have a future:

1. Home is the university of life.

God gave His commandments to the home. He didn’t hand them down to the government, though the government should abide by them. He didn’t give them to industry, though industry should learn from them. He didn’t give them to education, though education should take note of them. He gave them to the family. God’s priority plan is that faith goes from parent to child. Our children should see our faith in God in all we do and say. The very atmosphere a child is raised in should be supercharged with godliness, based on the Ten Commandments.

2. Parents are the professors.

Deuteronomy 6:7 says of God’s commands, “You shall teach them diligently…”

Our problem is not primarily drop-out kids; it’s drop-out parents. What must you do to qualify as a professor for your children? Here’s the primary qualification: “You shall love the Lord your God with all your heart, with all your soul, and with all your strength” (Deuteronomy 6:5).

As their teacher, you must learn you cannot make decisions for your children. When they’re very little, you can. As they grow older, you can guide them, but ultimately they come to a place where they must make their own decisions. There’s a control center in every child. You cannot control the control center; that child controls it. God will not override it. God is not going to force a child or anyone else to behave in a certain way. God will enable, lead, and love them to do so, but they themselves must decide.

3. The Ten Commandments are the curriculum.

They’re not incidental—they’re fundamental, the liberating laws of life.

Do you have those Ten Commandments in your children’s bedrooms, family room, or the entrance of your home? God told His people to “write them on the doorposts of your house and on your gates” (Deuteronomy 6:9), so everyone sees them as they come and go. God gave the Ten Commandments as the tracks we run on.

You will never have a successful family until you set boundaries for your children. Don’t use “Because I said so.” Instead, “Here is what God teaches. The Word of God says….”

Set boundaries. Without boundaries, children grow up with a sense of insecurity. Pushing against those boundaries is normal. But if they push against a boundary and it gives way, from that moment on, children lose security. They conclude: “In our world, there are no real laws, no boundaries.” Establish the boundaries and refer your children back to God’s law as the final authority.

4. Children are the students.

Enroll them early in the university of life. If you begin when they’re five, you’ve waited five years nine months too long. Frances Xavier said, “Give me the children until they are seven, and anybody can have them from then on.” In other words, character is formed by the time they’re seven. Children should be given to God before they are born. Enroll them early in the school of life.

5. Life is the laboratory

Real life, day by day, moment by moment, in every situation, is your family’s lab class.

Deuteronomy 6:6-9 says, “And these words which I command you today shall be in your heart. You shall teach them diligently to your children, and shall talk of them when you sit in your house, when you walk by the way, when you lie down, and when you rise up. You shall bind them as a sign on your hand, and they shall be as frontlets between your eyes. You shall write them on the doorposts of your house and on your gates.”

Teach the Word of God

Psalm 112:2 beautifully summarizes the family’s future: “His descendants will be mighty on Earth. The generation of the upright will be blessed.”

God has told us in Deuteronomy 5 and 6 there is a future for your family, and you need to claim it.