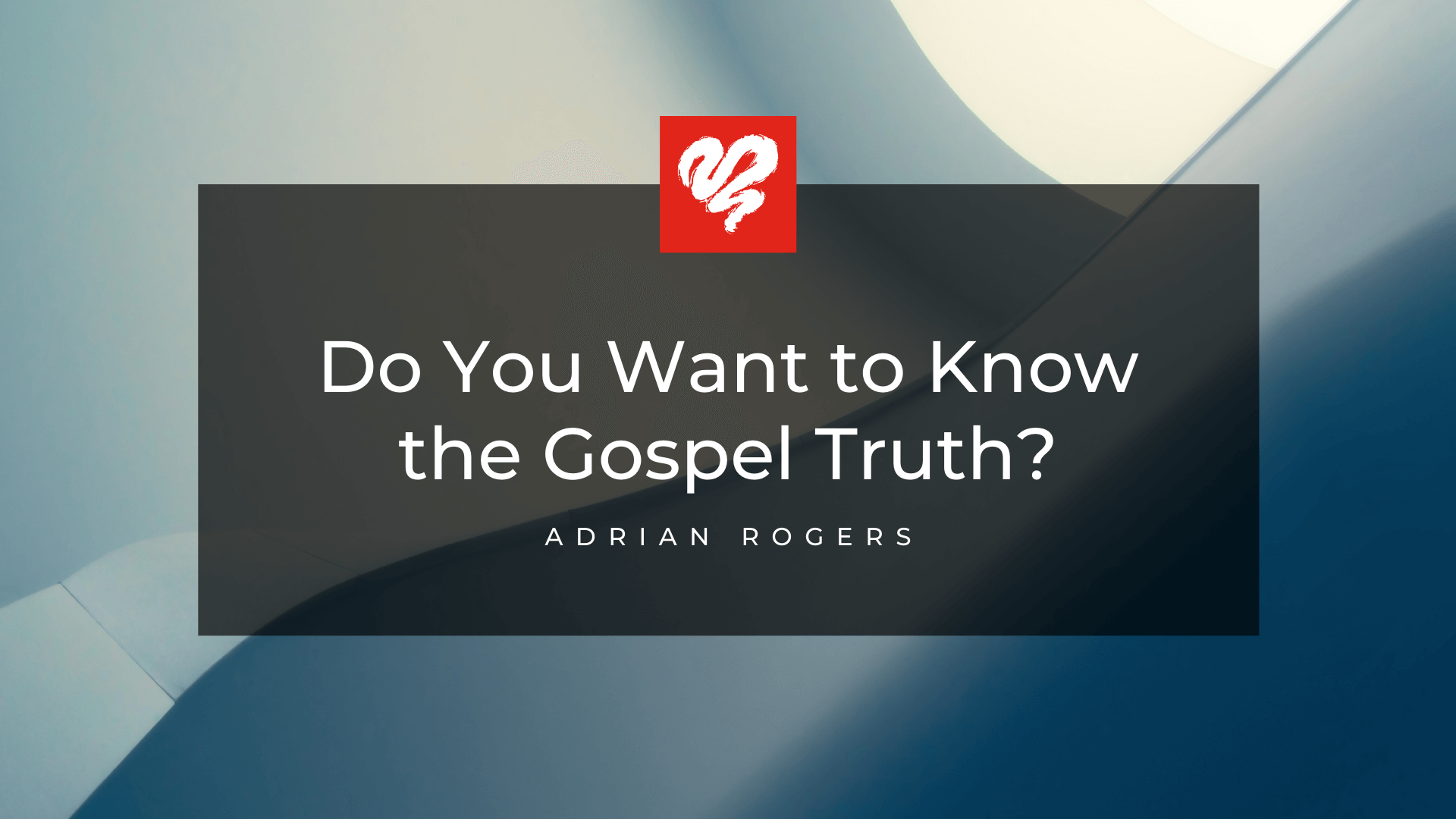 Do You Want to Know the Gospel Truth?

The word Gospel* means good news, and we’ve got the best news of all: Jesus Christ has conquered sin, death, Hell, and the grave, and we can live forever with Him. Friend, that's good news. When you have good news, you tell it.

Imagine a little procession of caterpillars. They're down there on the ground having a funeral carrying along a cocoon, because that's where their brother used to be, in that cocoon. And he's disappeared. He's gone. They said, “He went into this cocoon. He’s gone. This is all we've got left of him—just this outer shell. We're going to have a funeral and put it in a grave.” So there they are, their little feet going along in the mud. All the while, above them is a butterfly. He’s shimmering; his wings are in the sunlight. He’s free; he's complete; he’s what he was made to be. And while they're down there, crawling along, feeling sorry for him, he's up above, looking down and feeling sorry for them.

What makes good news, good news? Bad news! Bad news is the black velvet against which the diamond of God’s grace shimmers brilliantly.

What’s the bad news? “Our sins.” Today we think the word “sin” is too primitive, too old-fashioned. We prefer “error, mistake, misjudgment, weakness, psychological maladjustment.” We've taken old poison and put new labels on it. So today, adultery is “sleeping around.” Lying is “being disingenuous.” Cheating is “taking unfair advantage.”

Evolution says, “We’re just an accident, evolved from primordial slime. There's no absolute standard of right or wrong, so there’s no such thing as sin.” Humanists say sin is the invention of the church to keep everybody in line. Liberal preachers have bought into all of it.

But sin is public enemy number one, hellish, damnable, a clenched fist in the face of God, who has said,

For the wages of sin is death. (Romans 6:23)
The soul who sins shall die. (Ezekiel 18:20)
Through one man, sin entered the world, and death through sin, and thus death spread to all men because all sinned. (Romans 5:12)

If you say, “I’ve only sinned just a little,” the Bible replies, “For whoever shall keep the whole law, and yet stumble in one point, he is guilty of all” (James 2:10).

How many of the Ten Commandments do you have to break to be a sinner? Just one.

Have you ever told a lie? Taken something that wasn’t yours? Cheated on a test? Little things are an indication of larger things. The problem is not what a person does but what he is. These things come out of the heart (Proverbs 4:23). We do what we do because we are what we are. We’re born with a sin nature. Until you deal with the bad news—sin—the Gospel will never be good news to you. When the Holy Spirit convicts you of sin, you can understand a Savior. Bad news makes the good news good.

God’s good news comes from the death, burial, and resurrection of the Lord Jesus Christ. Sin brings with it a penalty we must pay. It brings pollution to our lives. It has power over us. Here’s how our Savior deals with each one of these:

God cannot just overlook or forgive sin without payment being made. If He were to do that, He would no longer be holy, righteous, or just.

Suppose you were guilty of some horrible crime, and a judge said, “Oh, I’m a loving guy—I forgive you. You’re free to go.” He has no right to do that. He'd be removed from the bench. He must see that justice is done. If God willingly, knowingly overlooked sin, He would become a sinner Himself, no longer holy. But Jesus Christ died as the full payment for our sin debt. That wasn’t a random occurrence or an after-thought—it was planned “according to the Scriptures” (1 Corinthians 15:3). Seven hundred years before Christ was born, in the Old Testament, the Jewish Scriptures said,

All we like sheep have gone astray; We have turned, every one, to his own way. And the Lord has laid on Him [on the Messiah] the iniquity of us all. (Isaiah 53:6)

Our sins were laid on the Lord Jesus Christ, who took them to the cross. There as He died, He said, “It is finished.” In the original language, He said, “Tetelestai,” a word that everyone who heard it knew what it meant: “paid in full.” When someone paid off a debt he owed, he was given a receipt with one word stamped on it: “Tetelestai” (paid in full).

Jesus became sin for us.

For He made Him who knew no sin to be sin for us, that we might become the righteousness of God in Him (2 Corinthians 5:21).

When Jesus was put away in the grave, the pollution of sin was buried in the grave of God's forgetfulness. The Bible emphasized Jesus’ burial (1 Corinthians 15:4) so everyone would know He was truly dead, not just unconscious, on the cross.

When you accept Him as your Savior, God not only pardons you from the penalty of sin, but you receive His forgiveness, “paid in full.” He cleanses you on the inside. “Though your sins are like scarlet, they shall be as white as snow” (Isaiah 1:18). You never have to be haunted by the ghost of guilt again. The old person you used to be is dead and buried. That's what baptism represents: being buried with Him (Romans 6:4).

Satan’s power was broken when Jesus Christ was raised by God the Father. A lower court put Jesus through a mock trial, falsified charges, judged Him worthy of death, nailed Him to the cross, then buried Him. But God the Father reversed that court, saying, “I'm the Supreme Court of the Universe, and I will raise Him up.” On the third day, He was raised again by God the Father (Acts 2:23-24), triumphant over sin, demolishing its power.

Jesus’ resurrection was God's stamp of approval upon His life. God settled forever this issue:

Was He deceived or Deity? Romans 1:4 tells us He was “declared to be the Son of God with power according to the Spirit of holiness, by the resurrection from the dead.”

Jesus walked out of that grave, presenting Himself alive to the apostles after His death “by many infallible proofs, being seen by them during forty days and speaking of the things pertaining to the kingdom of God” (Acts 1:3).

He is now risen and will always be risen. You will never be done with Jesus Christ. You can refuse Him, and if you die without Him, you'll rise in the judgment of the damned, and there, sitting on the throne, will be Jesus Christ. He is risen. That's what the Gospel is all about.

There's no way to be saved apart from the Gospel, "for it is the power of God to salvation” (Romans 1:16). “Nor is there salvation in any other, for there is no other name under heaven given among men by which we must be saved” (Acts 4:12).

The Gospel saves us in this present day from the penalty and power of sin, but one day we’ll be saved even from the presence of sin when we’re in Heaven.

Salvation is not only a crisis where you come to God and He forgives your sin, but it's a crisis followed by a process. He continues to work in you, day by day, making you more like the Lord Jesus Christ. He’s not finished with you yet. “He who has begun a good work in you will complete it until the day of Jesus Christ” (Philippians 1:6). We haven't stopped growing in the grace and knowledge of our Lord and Savior Jesus Christ.

Once we’re saved, we can never lose it. That’s glorious news. The Gospel is a stabilizing force “in which you stand” (1 Corinthians 15:1). When you get saved, you don't keep Him—He keeps you. You will be held up. Paul insists that indeed the believer “will be made to stand, for God is able to make him stand” (Romans 14:4). Once God saves you by His grace, He keeps you by His grace. Never think that salvation is probation, where God gives you a fresh start, then sees if you can make it. No. You’re saved by and kept by His grace, kept in the Gospel.

The Gospel runs a course that extends to every person, flows to every place, and covers every problem. Anyone, anywhere on Earth, no matter what you’ve done—murder, adultery, whatever—if you’ll trust Jesus, He will save you. “For whoever calls on the name of the Lord will be saved” (Romans 10:13).

Even though Paul had persecuted the church, he could say, “But by the grace of God, I am what I am, and His grace toward me was not in vain” (1 Corinthians 15:10). No one, anytime, anywhere, called on Jesus Christ in repentance and faith to save him, to find that He refused. Paul gratefully said, “God saved even me.”

No other plan, teacher, method, or way, apart from the Gospel, can answer our problems of sin, sorrow, and death. Our greatest problem is death. We're going to die. But the Good News of the Gospel is that Christ was raised and has conquered death, Hell, and the grave.

Do you have loved ones in Heaven? They're there because of the Gospel Truth that Jesus is risen triumphant. Every problem you have is answered in the Gospel of Jesus Christ.

God loves you. He wants to save you, and He will save you if you’ll trust Him. Come to Jesus. Do it today.

*The word Gospel when used with a capital “G” comes from the Old English term god meaning "good" and spel meaning "news, a story." In Christianity, the term good news refers to the story of Jesus Christ's birth, death, and resurrection as recorded in the first four books of the New Testament. When used more generally with a lower case “g” the word gospel means “an unquestionable truth.” SOURCE: https://www.vocabulary.com/dictionary/gospel.