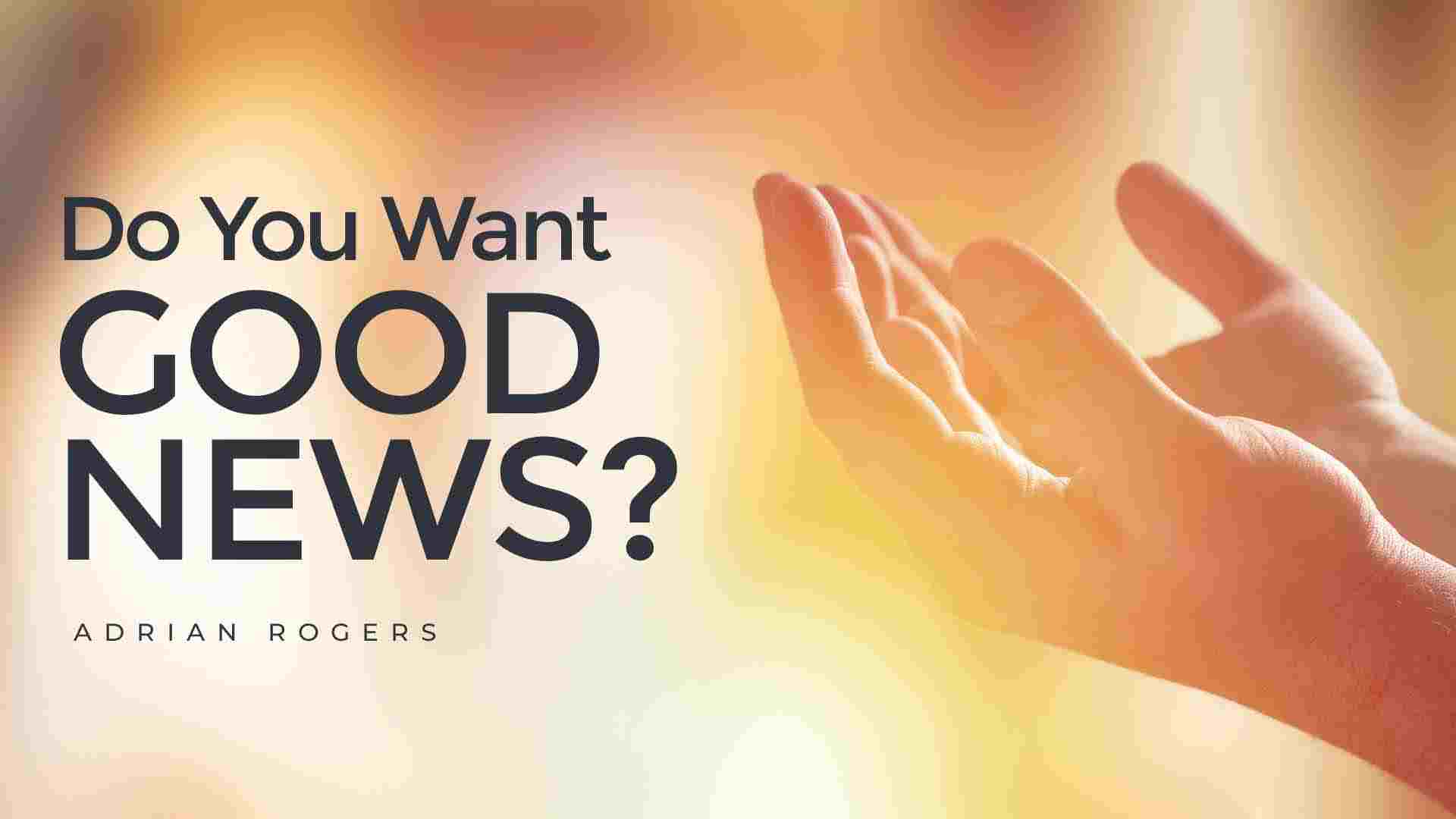 Do You Want Good News?


This article is based on Pastor Adrian Rogers' message, It's Time for Some Good News.

It’s been a steady stream of bad news so far in our study of Romans. But today we take a turn. Paul is about to give us some good news. In Romans 1-3, we learned about our choice to rebel against God and about our relentless wickedness. Paul spoke directly to skeptics and scoffers, then put the spotlight on the hypocrite, the self-righteously religious, and finally, all humanity. He summed it up in Romans 3:23, “…for all have sinned and fall short of the glory of God.”

Grace is the unmerited favor and kindness of God shown to one who does not deserve it and can never earn it. If you’re saved, you will be saved by grace or you won’t be saved at all. In Romans 4, we’ll see the Gospel through the eyes of three of the Bible’s most prominent characters: Abraham, King David, and the Apostle Paul.

“What then shall we say that Abraham our father has found” (Romans 4:1)?

Abraham, founding father of the Jewish people, the brightest star in the Hebrew heaven, made a “eureka!” discovery.

“Abraham believed God, and it was accounted to him for righteousness” (Romans 4:3).

Abraham is held in such high esteem that, in the Jewish mind, if anyone could work his way into Heaven by good works or character, it would be Abraham. But Abraham wasn’t saved by behaving. He was saved by believing—and God put that on Abraham’s account for righteousness.

Abraham first believed God when responding to His command to go to an unknown land. He believed God again when He reappeared and promised to give Abraham a son through whom he would have so many descendants, God declared, they would outnumber the stars he could count in the sky. (See Genesis 22:17.)

If Abraham could be saved by being good, he might boast about it and glory in his own salvation. (See Romans 4:2.) But when Abraham believed God, that gave God glory. People through the centuries have tried to do things to curry favor with God. But do you know what glorifies God? Believing God.

If you’re saved by works, you’re getting the glory. If you’re justified by faith, all glory belongs to God. Human pride says, “I want to do it.” When you add your two bits of self‑effort to the grace of God, you take away His glory and hand it to yourself: “Look what I did!”

There are no peacocks in Heaven. Instead, the redeemed are singing, “Blessing, honor, glory, and power be to Him who sits on the throne, and to the Lamb, forever and ever” (Revelation 5:13)!

Faith believes God not for what He does, but for who He is. Faith is a response to His nature and character. Faith glorifies Him, and God rewards faith.

Believing went as a credit on Abraham’s account. (See Romans 4:3.) If your translation says “impute,” it’s the same as “credited to.” The term is used over and over again in Romans 4. The only way you’re going to be saved is for God to credit something to your account. He credits righteousness to you when you have the faith of Abraham.

Our problem is that Adam’s sin was credited to our account. When Adam sinned, you as his descendant inherited his sinful nature.

“Through one man sin entered the world, and death through sin, and thus death spread to all men…” (Romans 5:12).

Sin and death were put on everyone’s account. But wait for “the rest of the story.” Through the sacrifice of Jesus Christ on the cross, our sin was then imputed to Jesus. What got charged to us through Adam got transferred on the cross to Jesus, “who was delivered up because of our offenses…” (Romans 4:25). Not for His own offenses, but for ours.

A great exchange occurred: “For He [God] made Him [Jesus], who knew no sin to be sin for us, that we might become the righteousness of God in Him [Jesus]” (2 Corinthians 5:21).

Jesus was the sinless, spotless Lamb of God. But God made Him to be sin for us. God didn’t make Him a sinner. He was never a sinner. Adam’s sin, your sin, my sin—all were put on Jesus, who carried our collective sin to the cross. And now, thank God, Jesus’ righteousness is imputed (credited) to us. That, friend, is the Gospel—the Good News.

Paul’s readers would remember that David committed murder. Worthy of death, David’s case was hopeless apart from God’s grace. Yet through grace, when David repented, God put on David’s account, not sin, but Jesus’ righteousness. Paul continues in Romans 4:6, “just as David also describes the blessedness of the man to whom God imputes righteousness apart from works…”

God brought David to a place of repentance. When David received this grace of God, he wrote about it in Psalm 32, and Paul quotes Psalm 32:1-2 here in Romans 4:7-8, “Blessed are those whose lawless deeds are forgiven and whose sins are covered; blessed is the man to whom the Lord shall not impute [charge his account with] sin.”

Your sins are forgiven.

There are no free pardons in Heaven. As verses 7 and 8 confirm, someone must pay the price for your sin to be forgiven, and the one who does the forgiving is the one who pays the price.

For example, suppose someone steals $10 from you. Then he feels so guilty he comes and confesses, “I stole $10 from you, but I don’t have it to give back.” You say, “All right, I forgive you.” The minute you forgive him, what happens? It costs you $10. You see, someone pays when a debt is forgiven. You, the forgiver, absorb the penalty.

That’s what Jesus did on the cross. When God forgives sin, He isn’t overlooking it; He Himself pays the price, and by sovereign grace, the sinner is saved. Someone wrote, “I owed a debt I could not pay. Jesus paid a debt He did not owe.”

But it’s even better than that.

Your sins are covered.

Even though you forgave the one who stole from you, you’d still remember he had done it. But when God forgives, God forgets: “You will cast all our sins into the depths of the sea” (Micah 7:19).

There are depths in the ocean no one has probed, places where the pressure is so great, nothing could even sink there. It’s as dark as midnight, and that’s where God has put your sins.

You can measure the North Pole to the South Pole, but you can’t measure East from West. Your sin is covered, gone, forgotten. Could it get any better? Yes.

Your sins are no longer imputed (charged to your account).

Not only does God forgive and cover your sin, but He also no longer imputes it. (See Romans 4:8.) When you get saved, God will never put your sins on your account again. You say, “Even if I sin today?” What do you mean, “Even if…?” Of course, you will sin again. God has provided for all your sin.

Some people think, “If I’m living right when I die, I’ll go to Heaven.” If that’s what you’re counting on, you’re going to Hell. I wouldn’t trust the best fifteen minutes I ever lived to get me to Heaven, much less the worst. Understand what sin is, and we do this every day. Consider:

Don’t think your goodness will get you into Heaven. If God were to put one-half of one sin on your account, you’d die and go to Hell. But when you are saved, God no longer charges sin against your account.

It doesn’t mean you can sin and get by with it. He’ll carry you to the woodshed, but God will never put that sin on your account. If He did, you’d have to get saved all over again. When you understand grace, you can understand why John Newton wrote, “Amazing grace, how sweet the sound, that saved a wretch like me.”

Paul starts speaking to Gentiles in Romans 4:9, explaining that salvation doesn’t come by rituals like circumcision, but by faith, for Abraham was saved before he was ever circumcised. (See Romans 4:11.)

Some believe you must go through a ritual like baptism to be saved. No, that removes “whosoever” from Scripture. A man in the desert couldn’t be saved because there’s no water. A man in a submarine, surrounded by water, couldn’t be saved. You’d have to say, “For whosoever shall believe, be near water, and be fortunate enough to have a preacher of my denomination nearby, shall be saved.” That’s ridiculous.

The Bible says plainly, “Believe on the Lord Jesus Christ, and you will be saved” (Acts 16:31).

Salvation through grace was discovered by Abraham, described by David, disclosed by Paul who explains, in effect, “It’s not by ritual or by resolve. It’s by reception.” You just receive God’s amazing grace.

One of England’s most famous poets, William Cowper, was so distraught, so tormented in his mind, he planned to kill himself. He was living in Paris, went down to the River Seine, and four times tried to muster enough courage to throw himself in the Seine. He couldn’t do it, so he got some poison. Three times he put the poison to his lips, but he couldn’t do it. So, he said, “I’ll shoot myself.” Twice he held a gun to his temple but couldn’t pull the trigger. Then someone told him about Jesus. William Cowper penned these words, “There is a fountain filled with blood, drawn from Emmanuel’s veins, and sinners plunged beneath that flood lose all their guilty stains.”

No boasters appear in Heaven, only those who’ve trusted the grace of God. That’s the Good News, and that’s what you need: God’s amazing grace.

It's Time For Some Good News Outline and Transcript