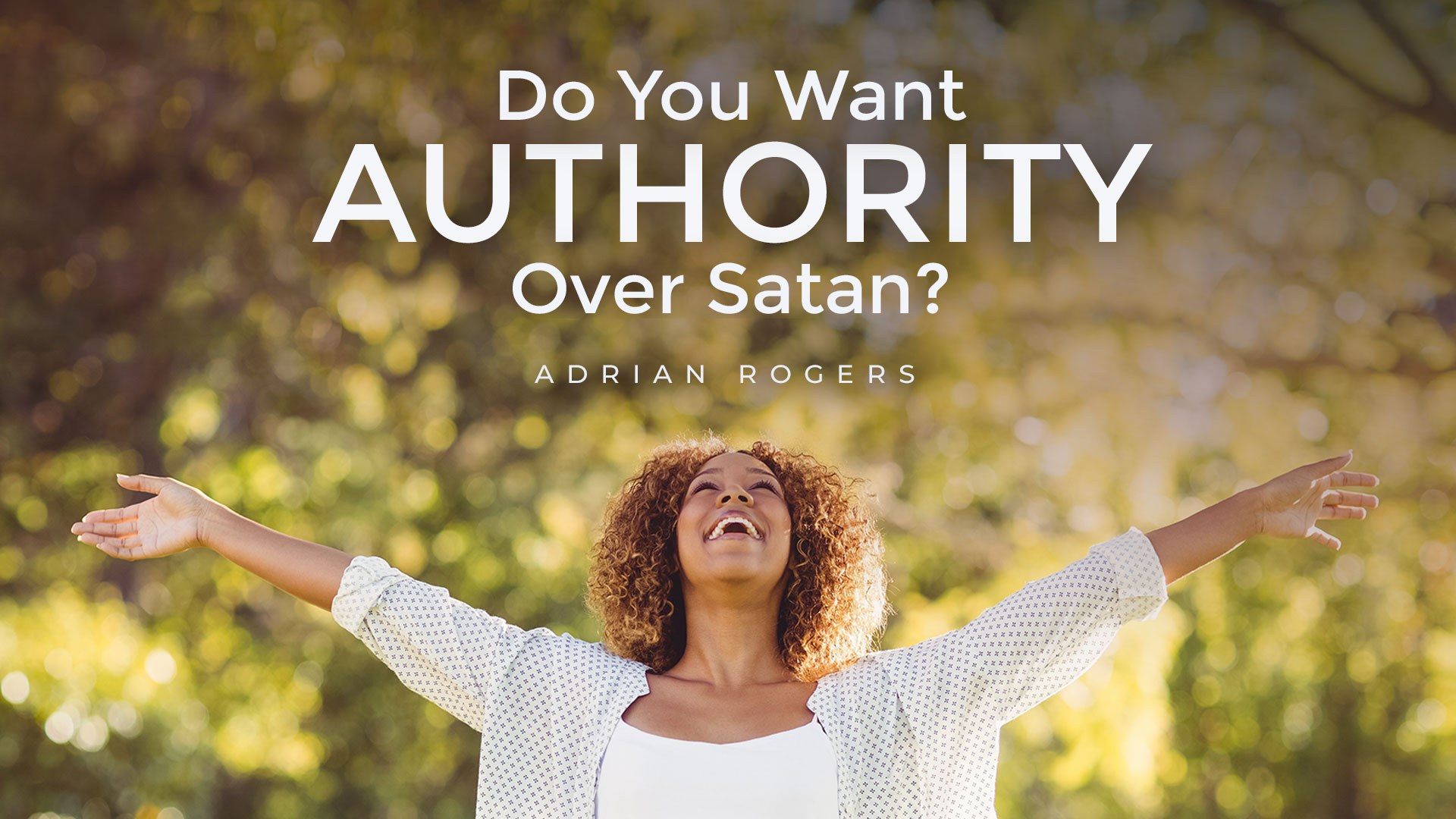 Do You Want Authority Over Satan?


This article is based on Pastor Adrian Rogers' message, Strength Through Authority.

There’s no greater truth for a Christian to discover and no greater blessing than the truth about kingdom authority—and kingdom authority is already ours. Jesus gave it to us 2,000 years ago. He bought it back on the cross and conferred it upon us in the last words He spoke before returning to Heaven. Despite that, many followers of Christ know nothing about it and lead defeated lives.

But you don’t have to—once you discover kingdom authority.

Authority is the official, legal right to act in a situation. If we’re going to have kingdom authority and the victory it brings, we must know what it requires.

Of all people in the New Testament, it was a Roman centurion who recognized it first, and what he said astounded Jesus. If something a human being says astounds the Son of God, don’t you think we ought to pay attention? Jesus said this man had more faith than anyone He’d ever met among the people of Israel.

The centurion had a servant in his home, someone dear to him, who was at the point of death. He sent some Jewish elders to Jesus, thinking they would have more sway with Jesus than he, a Roman. The elders asked Jesus to heal the servant because this centurion loved the Jewish people and had even built them a synagogue (Luke 7:1-5).

Jesus had to be intrigued by him. As commander of one hundred soldiers, he was important in the Roman army. And He was a Gentile. But before Jesus could arrive, the centurion sent word saying, “Don’t even come into my house. I’m not worthy of that, or even to ask you for help. But if you just say the word, my servant will be healed.”

Now, how could the centurion know that? Look further at what he said:

The centurion saw what others didn’t: Jesus was under authority. He grasped more about what was taking place in the heavenly realm than did the Jewish leaders: “I have a general over me, and ultimately the Emperor. I’m under authority. That’s what gives me the authority to tell those under me to come and go. Because I’m under authority, I’m over these who are under me.” Simple. That’s the way it works.

How did Jesus react?

He marveled: “This man’s got it! He sees it! Not even the children of Israel get this. He understands kingdom authority.” And at that moment, the servant was healed. (See Luke 7:9.)

1. You must know where your authority comes from.

All authority comes down to us from a higher power. It flows from above. You must be under authority to have authority. You have authority because of the One who is over you—Jesus Christ.

Don’t miss this. Satan will do everything he can to keep you from learning the truth of your kingdom authority in Christ. Just like the centurion, any authority you hold is no better or stronger than the one who is over you.

Joined with Jesus in His death, burial, resurrection, ascension, and enthronement, your authority comes from Him. He says, in effect: “I’m giving you power of attorney to act for Me.” (See Matthew 28:18.)

Today Jesus is at the right hand of God. Angels, authorities, and powers are subject to Him (1 Peter 3:22). Does Jesus have dominion over Satan? Yes. Over demons? Yes. Are you in Jesus? Yes. If they’re subject to Him, they must be subject to you. It flows from above.

Not somewhere else, but right now—in life, not in the afterlife—through His victory, you have victory.

To some, this seems too good to be true. “The truth will set you free” (John 8:31), but it won’t if you don’t know it. I want you to know it. We’re not talking about defeating Satan in the world to come. We can overcome Satan where we work, today and tomorrow morning. In Christ, we got back the dominion we lost in Adam.

2. You must know kingdom authority’s secret.

All authority is linked to obedience. You cannot have authority until you get under the authority that’s over you.

Only then can you be over those things your authority [Christ] has set you over. As the centurion said, “I also am a man set under authority, having under me soldiers” (Luke 7:8).

Why would someone give you authority to act for him when you’re disobedient? God surely won’t. When Adam disobeyed, he forfeited his authority.

Vestiges of rebellion still lurk in our hearts. We don’t want anyone to be over us. But if you don’t know the restraint of the Spirit, you’ll never know the release of the Spirit.

Authority is everywhere—home, church, government. The reason you don’t have kingdom authority is that you’ve never learned to be under; therefore, you won’t be over.

Are you under the authority of the Word of God?
Have you submitted to the lordship of Christ?
Do you know the direction of the Holy Spirit?

Jesus Christ was under:

The secret is clear: You cannot be over unless you’re willing to be under.

3. You must know how far your authority extends.

How far does it extend? To the things of the Spirit of God.

Behold, I give you the authority to trample on serpents and scorpions, and over all the power of the enemy, and nothing shall by any means hurt you. (Luke 10:18-19)

Our authority is over all the power of the enemy. Now, potentially, we gain more in Christ than we ever lost in Adam. But Adam’s authority over all the forces of nature has not been given to us yet. (See Hebrews 2:8.) We don’t live in the Garden of Eden.

Our inheritance won’t be restored in full until Jesus comes again. You and I are given authority over the power of the enemy, not over all creation. Two separate things. You may be Spirit-filled, but don’t throw a rock in a hornets’ nest. Our dominion over the forces of nature will not come until the Millennium, as Romans 8:22-23 explains:

For we know that the whole creation groans and labors with birth pangs together until now. Not only that, but we also, who have the first fruits of the Spirit, even we ourselves groan within ourselves, eagerly waiting for the adoption, the redemption of our body.

The restoration of nature and the redemption of your body are future events. When Jesus says He gives you authority, He’s talking about spiritual authority, not authority over microbes, mosquitoes, mildew, or mudslides. Disease, destruction, and depravity are worldwide. You’re not insulated from them.

You must understand that. Otherwise, the devil will have you thinking you can make it rain or walk into a hospital room and empty it. No, you can’t.

Some televangelists have so distorted this truth, they’d have you believe kingdom authority is the key to Fort Knox and the fountain of youth rolled into one. Their gospel of cash, Cadillacs, and comfort isn’t the Gospel of Jesus Christ. Our authority is here: “His divine power has given to us all things that pertain to life and godliness” (2 Peter 1:3). And here: “I have given you authority over all the power of the enemy” (Luke 10:19).

For today, that’s how far our kingdom authority extends.

One day the wolf and lamb will live peaceably together. (See Isaiah 11:6, 65:25). The desert will blossom like a rose. (See Isaiah 35:1.) The Earth will be filled with the knowledge of the glory of the Lord as waters that cover the sea. (See Habakkuk 2:14.) But Hebrews 2:8 says, “Not yet.” Meanwhile, Satan has no power that the child of God cannot overcome with kingdom authority.

4. Your authority and strength come from surrender.

The centurion was trusted with a command because he had surrendered to the authority above him.

Authority and power aren’t the same. Professional football players are powerful. They can be 6’4”, weigh 300 lbs., and run as quick as cats. They wear helmets, faceguards, and other protective gear. There’s another little fellow out on the field weighing 155, wearing no helmet—just a striped shirt and whistle. If he blows the whistle and says, “Get off the field. Go to the showers,” he’s got the authority, and the 300-lb. player obeys. One man has power. The other has authority.

You are the little guy. Jesus says to you, “I give you authority over all the power of the enemy. It’s time you told him to take a hike.”

A while back I attended the mayor’s prayer breakfast where the speaker was president of one of the most powerful companies in the world. As businessmen go, he was a “10.” He told how he gave his life to Christ and of the change that occurred. I wrote down something he said: “Every morning when I go out, I put a white handkerchief in my pocket. It’s not a fashion statement. It’s a sign of surrender, reminding me each day that in 1961 I surrendered my all to Jesus Christ, and I am His to command.”

A business magnate with hundreds of people working under him humbly says, “I am His to command.”

Have you said that to Jesus Christ? Do you mean it? If so, you’re going to understand the tremendous strength of kingdom authority.

Understand the source, secret, scope, and strength of your spiritual authority and begin exercising your authority in life and in prayer.

This World Is Not My Home Booklet