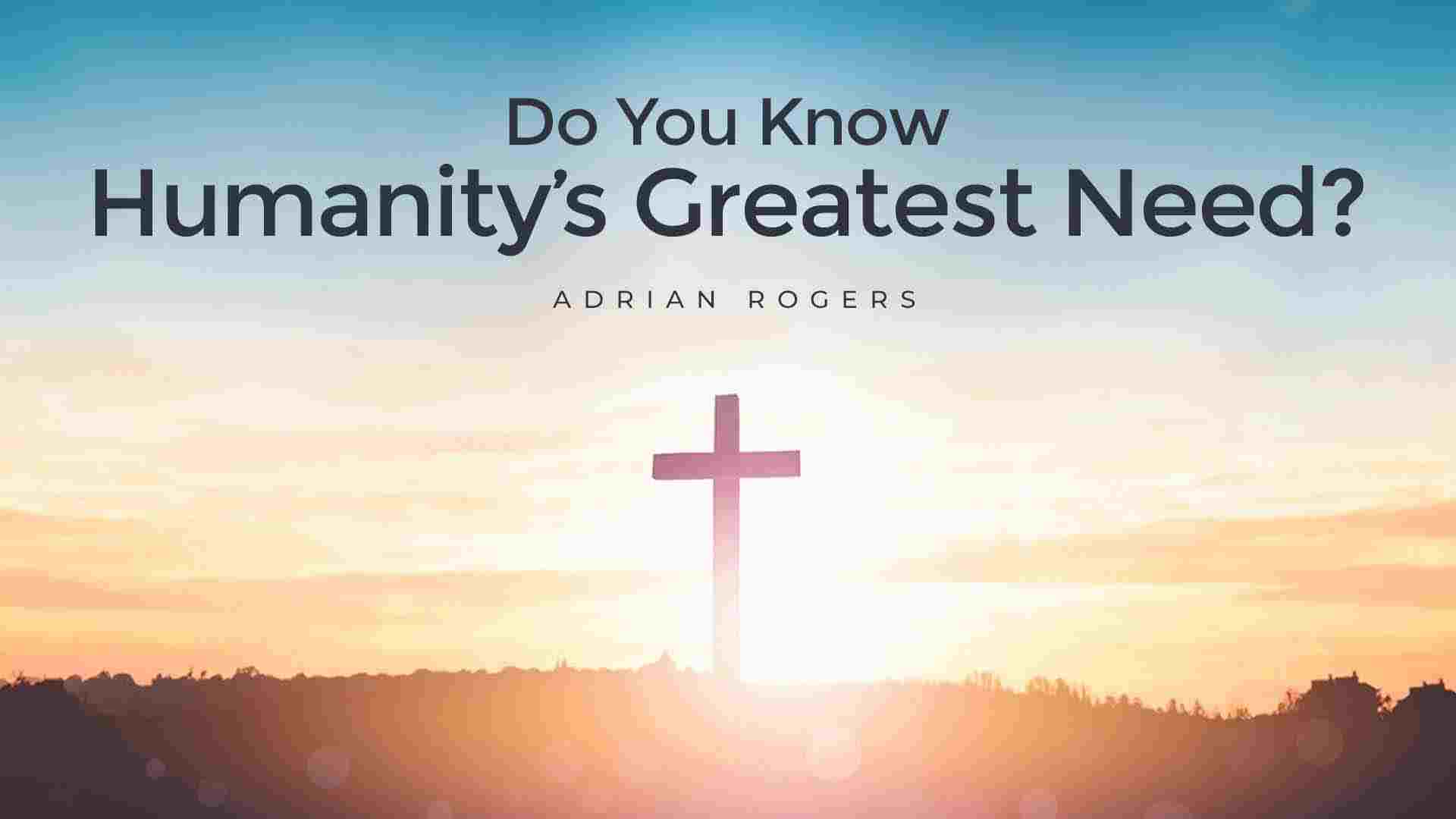 Do You Know Humanity’s Greatest Need?


This article is based on Pastor Adrian Rogers' message, Salvation.

There are only two categories of people on earth: saved or lost. “Saved” is an old-fashioned word. This generation thinks it’s out of date. But one day you will stand before God—we all will—and what will matter most to you is: Am I saved? Or am I lost? The answer will make a colossal difference.

Know this about salvation:

That’s salvation by reward. He thinks salvation is a reward for the righteous. No, salvation is a gift for the guilty. If you don’t understand that, you’ll never have salvation. Paul talks about his brothers, the Jewish nation, in Romans 10, and his longing for Israel that his brothers might be saved.

Brethren, my heart’s desire and prayer to God for Israel is that they may be saved. For I bear them witness that they have a zeal for God, but not according to knowledge. For they, being ignorant of God’s righteousness and seeking to establish their own righteousness, have not submitted to the righteousness of God. For Christ is the end of the law for righteousness to everyone who believes. (Romans 10:1-4)

Many people will go to Hell not because they’re drug dealers or thieves, but because they’re “good” in their own estimation. They think the Gospel is just for the sinner, the down and out. I’ve come to see that most people, when it comes to sin, are egomaniacs trusting in their own religion, believing they’re too good to be damned.

The Apostle Paul was one of them. He explained in Philippians 3:4-7 that he was one of the most religious of all men. He listed his lineage in the tribe of Benjamin and described how he followed all the law. He rose in the ranks until he had the highest religious position in Israel. He persecuted those he deemed enemies of God, and when it came to the law, Paul said he had (at least outwardly) kept all the commandments: “You talk about religious—I’m your guy.”

This is when something good becomes something bad if it keeps you from the best. But then in verses 7-8, Paul shares his reality check:

But what things were gain to me, these I have counted loss for Christ. Yet, indeed, I also count all things loss for the excellence of the knowledge of Christ Jesus my Lord, for whom I have suffered the loss of all things, and count them as rubbish, that I may gain Christ... (Philippians 3:7-8)

“All my pedigree, all my goodness, all those accomplishments I was trusting in? They’re nothing.” Paul says. “I count my ‘goodness’ as badness, as loss, because it was keeping me from the Lord.” That’s what religion is without the Lord. The worst form of human goodness is badness, if human goodness keeps you from salvation.

Paul was grieved for his fellow Jews, trying by way of the law to establish their own righteousness when “Christ is the end of the law for righteousness…” (Romans 10:4).

Stop striving for your own goodness. Instead, trust in Christ with full confidence—trust in, bank upon, cast yourself upon Him with full reliance. Christ has already provided your salvation. Say, “Lord Jesus, I just cast myself upon You. Here I am, Lord. I trust You!” Salvation is the free gift of God.

Before you’re saved, you find your eyes watch what they shouldn’t, your hands touch things they shouldn’t, your feet take you places you shouldn’t go. The law can’t help you or cure you. “Dr. Law” can only diagnose your problem: it tells you your struggles with sin are because of a heart problem.

So you go to “Dr. Grace,” and he says, “I’m going to give you a heart transplant. I’m giving you a new heart.” What will it cost? “Not a thing in the world—it’s free.” Dr. Grace pulls from your chest a vile, stinking heart that had been prompting you to do what you knew was wrong, and replaces it with a new heart. When He does, a change of nature goes through you that affects your eyes, your feet, your hands. Dr. Law is the law of God. Dr. Grace is Jesus.

But the righteousness of faith speaks in this way, “Do not say in your heart, ‘Who will ascend into heaven?’” (that is, to bring Christ down from above) or, “‘Who will descend into the abyss?’” (that is, to bring Christ up from the dead). But what does it say? “The word is near you, in your mouth and in your heart” (that is, the word of faith which we preach): that if you confess with your mouth the Lord Jesus and believe in your heart that God has raised Him from the dead, you will be saved. For with the heart one believes unto righteousness, and with the mouth, confession is made unto salvation. (Romans 10:6-10)

Paul wanted his Jewish brothers and sisters to be saved. He said, “Here’s the way to do it.” He wanted them to understand you don’t have to go on a pilgrimage to Heaven and say, “God, can You come down and help us?” Jesus already did that 2,000 years ago, stepping out of Heaven to be nailed to a cross and put in a grave.

You don’t have to go down into Hell, either, and say, “Lord Jesus, please come out of the grave and give us victory over death.” It’s done. His birth, death, and resurrection have already taken place.

Salvation is so near. “The word is near you, in your mouth and in your heart” (Romans 10:8). How did it get there? By what you’ve read on this page, and by what you’ve heard when the Gospel was preached to you. Salvation is by grace, through faith.

What’s next? What do you do? Right now, “if you confess with your mouth the Lord Jesus Christ and believe in your heart God has raised him from the dead,” God says, “you will be saved” (Romans 10:9).

It can’t be stressed too often: “Christ is the end of the law for righteousness to everyone who believes” (Romans 10:4). It’s a finished thing.

What’s the confession you make? That Jesus Christ is Lord. Salvation is not some intellectual belief you tack on. You fully commit everything to Him saying, “Lord, I take my hands off my life. I give it to You.” You take yourself off the throne of your life and put Jesus there instead. You receive a new heart, a new nature, and one day you’ll spend eternity in Heaven.

“For there is no distinction between Jew and Greek, for the same Lord over all is rich to all who call upon Him” (Romans 10:12). Moffat (James Moffat Bible translation) renders that verse: “His boundless resources are made available to those who call upon Him.”

I’ve been walking with the Lord now since I was a teenage boy. I’ve failed Him sometimes, but I’ll tell you this: He has never failed me. His resources have been there for me every time I’ve called upon Him. I’m not talking about financial resources, though He has done that. I’m talking about the life of God in my heart. He has met my need.

I do not believe anyone is predestined to go to Hell. God wants everyone saved. Whether you’re a Jew or a Gentile, whoever you are, wherever you are, if you call upon Jesus, He will save you. If you show me anytime, anywhere someone comes to Jesus in repentance and faith and He doesn’t save them, I’ll close my Bible and never preach again. He will save you.

“For whosoever shall call upon the name of the Lord shall be saved” (Romans 10:13). “And whosoever will, let him take the water of life freely” (Revelation 22:17). Not some—anyone who wants to be saved!

Paul began in Romans 10 telling people who were very religious they needed to be saved. Yet Paul himself, talking about it, called himself the chief of sinners. When it comes right down to it, there’s no one so good they need not be saved and no one so bad they cannot be saved.

Salvation is by grace through faith. You trust the Lord Jesus, not the law. The law cannot make you righteous. Only Jesus, by His cleansing blood, can do that.

Paul’s sincerest prayer and heart’s desire for Israel was that the people might be saved. That’s my desire for you today. Jesus is Lord, and I love Him. Don’t let your pride keep you from confessing the Lord Jesus Christ. I pray you will come into His fullness and richness.

If you would like to receive Jesus Christ as your personal Savior, just pray and tell Him something like this:
“Lord Jesus, I’m a sinner and I cannot save myself. I believe You paid my sin debt on the cross with Your blood. I turn from my sin to You. I confess You as Lord. I believe God raised You from the dead, and I trust You to save me. Help me never to be ashamed of You. In Your name, Amen.”