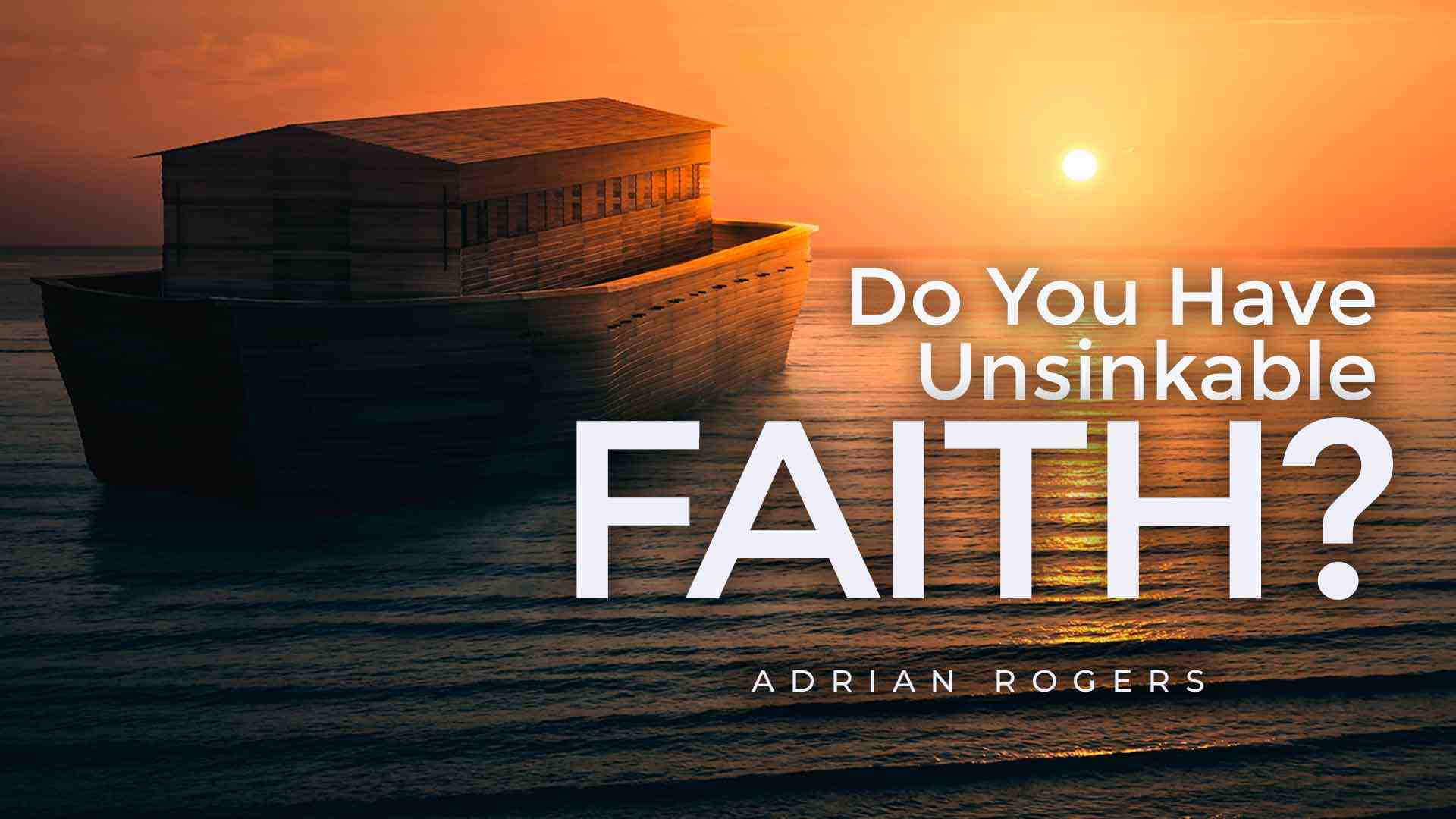 Do You Have Unsinkable Faith?

“By faith Noah, being divinely warned of things not yet seen, moved with godly fear, prepared an ark for the saving of his household, by which he condemned the world and became heir of the righteousness which is according to faith” (Hebrews 11:7).

Here are four things to lay on your heart about Noah, a champion of faith:

God warned Noah of the flood. But Noah had never seen rain. Before the flood, “The LORD God had not caused it to rain on the earth…but a mist went up from the earth and watered the whole face of the ground” (Genesis 2:5b-6).

Noah was warned of something he had never seen, but he had the Word of God. “So then faith comes by hearing, and hearing by the Word of God” (Romans 10:17). Faith is not a leap in the dark; it is a step into God’s light. You do not “name it and claim it”— you believe it and receive it, because God named it, and you claim it.

“Now faith is the substance of things hoped for, the evidence of things not seen” (Hebrews 11:1). The word hoped here does not mean “maybe,” “perhaps,” or “I wish.” Hope means bedrock assurance, “an anchor of the soul.” (See Hebrews 6:19.) Where do you get this assurance? From the Word of God.

God speaks to us in two ways:

First, through the logos, the written Word. That is, the 66 books of the Bible, the total revelation of God.

Second, through the rhema, meaning “an utterance,” also translated as word. When God takes the truth of the Bible and applies it to you in a situation, you have a rhema, and that is when you find faith growing in your heart.

The faith Noah received resulted in fear. “By faith Noah, being divinely warned of things not yet seen, moved with godly fear, prepared an ark for the saving of his household” (Hebrews 11:7a).

Fear sees God’s power, holiness, and justice. Faith sees God’s lovingkindness, grace, and mercy. The fear of God is not a cringing dread of God—it is love on its knees. Noah was a man of faith because he feared the Lord.

Having heard from God, Noah got busy. “But do you want to know, O foolish man, that faith without works is dead” (James 2:20)? God told Noah to build an ark, and Noah obeyed.

The word believe comes from the old English phrase, “by live.” What we believe, we live by. Don’t say that you have faith if you do not obey—and you must obey even when you don’t understand. Noah had not seen a flood, but he had a Word, and he obeyed.

Don’t say that you cannot have faith today because of the problems in society. Think of the ungodly world in which Noah lived:

There was secular philosophy. “Then the LORD saw that the wickedness of man was great in the Earth, and that every intent of the thoughts of his heart was only evil continually” (Genesis 6:5).

There was scientific progress. Don’t think they were plowing with sticks. They were building great cities in Noah’s day. How would you like to build a ship that could withstand the most ferocious storm the world has ever known?

There were social plagues. “The Earth also was corrupt before God, and the Earth was filled with violence. So God looked upon the Earth, and indeed it was corrupt; for all flesh had corrupted their way on the Earth” (Genesis 6:11-12).

Yet, in all this, Noah lived and preached. People did not listen, but he preached.

“By faith Noah, being divinely warned of things not yet seen, moved with godly fear, prepared an ark for the saving of his household, by which he condemned the world and became heir of the righteousness which is according to faith” (Hebrews 11:7).

What was Noah’s legacy? What was the wealth his faith received? Righteousness. He was made righteous in the sight of the Lord by faith. We receive spiritual life when we receive Christ. Noah was saved not by works, but by grace. “But Noah found grace in the eyes of the LORD” (Genesis 6:8).

Think of the heartache, the pain, the difficulty, and the cost Noah went through to build that ark. He went into the ark a minority. When he came out, he was the majority. We are on the winning side, but you have to see this by faith.

Picture it: the ark is finished. Storm clouds begin to roil. The earth trembles. Great fissures open, and water belches out. Rain comes down. But just before that, “The LORD said to Noah, ‘Come into the ark, you and all your household, because I have seen that you are righteous before Me in this generation’” (Genesis 7:1). God didn’t say, “Go into the ark.” He said, “Come.” God was in there.

Then God shut the door. (See Genesis 7:16.) The ark was sealed on the inside and outside with a gooey substance called pitch. (See Genesis 6:14.) The same word for pitch is also translated as atonement in the Old Testament. God put atonement on the outside and the inside, and not one drop of water could come through.

Peter tells us in the New Testament that the ark is a picture of Christ, of what will happen when you come into Jesus. (See 1 Peter 3:18-22.) God shuts the door. You are sealed with the Holy Spirit of promise. Not one drop of judgment can come to the child of God who is saved in Jesus.

Captain Noah and His Unsinkable Faith (2388)