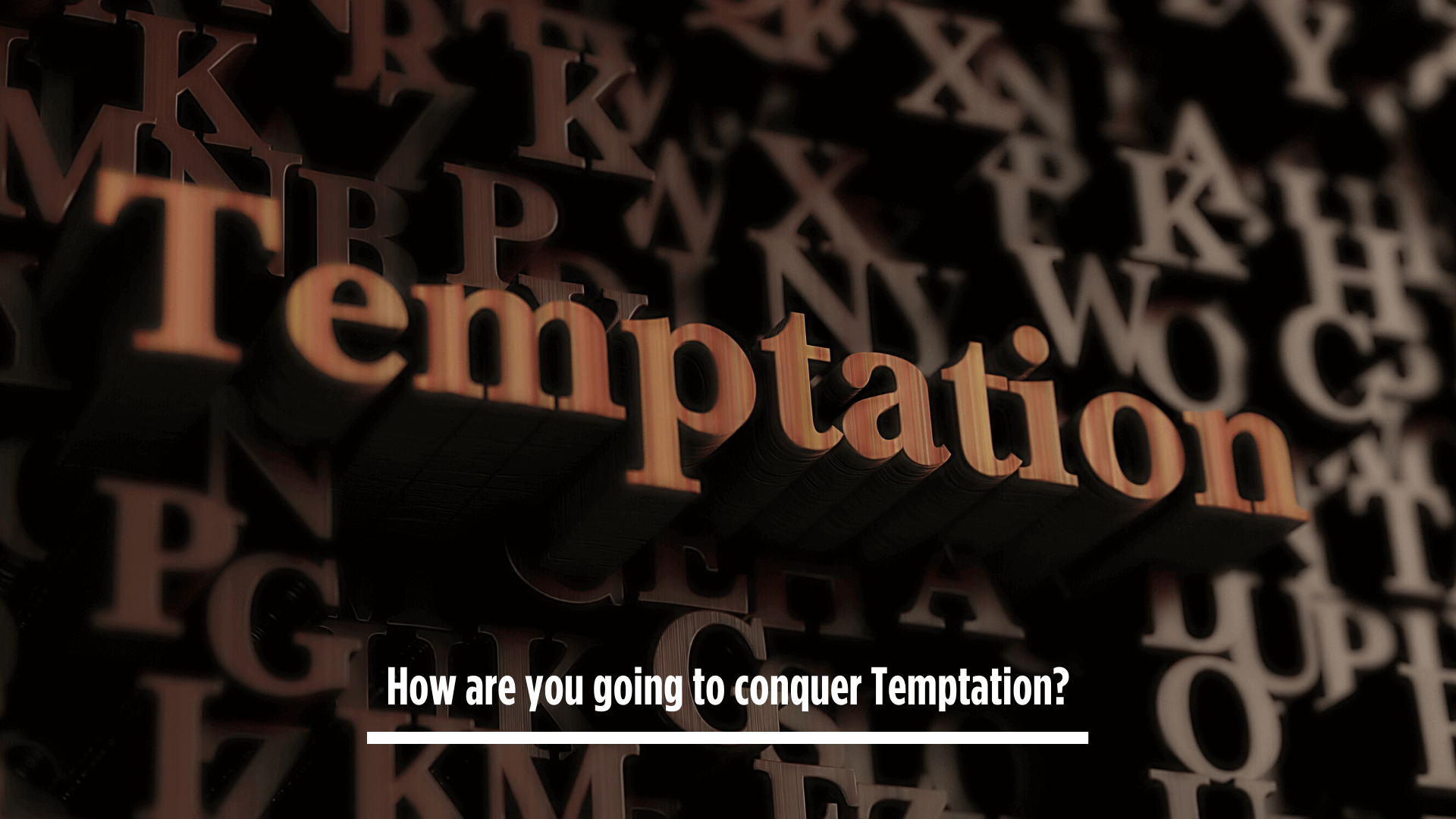 How Are You Going to Conquer Temptation?

Some people aren’t bothered by temptation because they do what they want, when they want. They don’t bother to conquer temptation.

2. Fight it with your own strength—the flesh.

Some will try over and over to resist in their own strength until finally, they're like the person who said, “I can overcome anything but temptation.”

“Then Jesus, being filled with the Holy Spirit, returned from the Jordan and was led by the Spirit into the wilderness, being tempted for forty days by the devil.” (Luke 4:1-2a).

His encounter with Satan in the wilderness will show us how to handle temptation.

How have you done, conquering temptation on your own?

You have a malevolent enemy out to harm you and those you love.

Satan’s goal is to kill, steal and destroy (John 10:10). The dynamite is in place, the fuse is laid, and the match is struck. He's setting you up for a fall. The backstory on this is that Satan's real war is with God. It began before God formed the earth. Evil persons have always known that if you can't get at someone specific—if you just can’t reach them, then get at an easier target—go through a person that someone loves, and you've gotten them anyway. Satan does just that, He did it in Genesis 3 in the Garden of Eden, and he wants to get at God by getting at you because God loves you.

We’ve had experiences that humbled us. Most of us have failed and failed, and we're sick and tired of failing. We sing about victory in Jesus, but are we truly living victoriously day by day, not as victims but victors?

We have an Example who helps us. The Lord Jesus had a head‑on collision with the devil (Luke 4 and Matthew 4), and came out victorious. We will conquer temptation when we do it as He did it.

Temptation can strike any person, any time, any place

Satan was so bold as to tempt the very Son of God. When you got saved, you didn’t suddenly become immune to temptation. If the devil had the audacity to tempt the Lord Jesus Christ, he will tempt you. Understand that being tempted is not a sin. Jesus was “tempted in all points like as we are, yet without sin” (Hebrews 4:14-15). If you’re tempted, there’s nothing wrong with you—there’s something right with you. It means you’re not in collusion with the devil but in collision with the devil.

Some of your greatest temptations will come after your highest spiritual experiences because Satan comes to counter‑attack. Temptation came to Jesus just as He returned from His baptism, where the Holy Spirit descended like a dove upon Him, and God the Father had just said, “This is My beloved Son, in whom I am well pleased.” Think about it: after the dove, up popped the devil. When you have the approval of Heaven, you'll have the assault of Hell.

Some people think, “I’ll just quit this job where people act so ungodly, so I won’t be tempted anymore.” Listen, Adam was tempted in a perfect place, the Garden of Eden, yet he fell. The Lord Jesus, the last Adam, was tempted in a wilderness, yet He conquered the devil. The first Adam fell in the garden; the second Adam overcame in the wilderness. You can’t isolate yourself from temptation. You could be tempted in a monastery.

All temptation falls into three groups.

The devil threw all three at Jesus, and you will face the same three for the rest of your life (1 John 2:16).

Every temptation you’ll face will be one of these or a combination of one, two or all three. So be on alert. Be aware!

Our passions involve those sins we do with our bodies. Passions can include out of control appetites and actions in the areas of food, sex, liquor, compulsive shopping, gambling, even sleep, laziness, uncontrolled anger or temper, and violence. Our flesh isn’t evil, but it can be made an operation of evil.

Jesus had been led of the Spirit into the wilderness to fast; He was there by divine appointment. When Satan said, “Make a god of your passions; turn stones into bread,” there was nothing wrong with eating bread. The temptation was to put His fleshly desire above the will of God.

Every sin is a perversion—the misuse and abuse of something normally right and good. Satan was tempting Jesus, and he will tempt you, to put your desires above the will of God. But God will not take second place.

Things that satisfy our aesthetic senses, what our eyes feast upon, can become a temptation. Your eyes have an appetite just like your body. While the lust of the flesh primarily involves the physical body, the lust of the eyes tempts your soul, your inner person.

Satan may tempt you with possessions. What consumes you? What do you think about? What are your personal goals and greatest energies directed toward? There is nothing wrong with buying a house, saving for retirement, or taking a vacation—unless they are what consumes you.

Are you more consumed with things than you are with your character and the character of your children? Hopefully, you are consumed with growing in Christ and sharing the Gospel. The devil can take something that's fine in second place, put it in first place, and then make it bad.

Is there any material possession you would not gladly part with for the glory of Jesus Christ? Satan offered Jesus possessions—all the kingdoms of the world. But we will sell out for a lot less. Judas sold out for thirty pieces of silver, Esau for a mess of pottage. Some people would give up coming to church before they'd give up getting a new refrigerator.

The last group of temptations fall into the category of an assault upon your being, on who you are, your personhood, and can take the form of your wanting authority, attention, power, and respect; of “being someone.”

Satan challenged Jesus in His being, His very Person. “If Thou art the Son of God…” he sneered when he dared Jesus to jump off the temple and prove His deity.

So you see that in this wilderness temptation by Satan, he tempted Jesus in all three:

We face these temptations every day. Doing, having, being, passions, possessions, pride. Temptation can take a myriad of forms, but your temptations are not new. The apostle Paul said, “No temptation has overtaken you except such as is common to man.” (1 Corinthians 10:13)

The Principles of Conquering Temptation

Here is how Jesus overcame the devil.

By Sonship—You must be a child of God

Jesus' favorite term for Himself was “Son of man.” He was the Son of God, but He didn't call Himself that. He called Himself the Son of man to identify with us.

By Submission—You must be willing to obey God

At His baptism, the Father said, “This is My beloved Son, in whom I am well pleased.” Why was He pleased? Because the Lord Jesus said, “I do always those things that please Him. (John 8:29) I am submitted to the will of My Father.”

Is the consuming desire of your heart to do the will of God? Are you submitted to His will, or simply want to escape temptation and do your will? Victory is not for rebels, and unless you have bowed the knee to the lordship of Jesus and made God sovereign in your life, there is no real hope for you to overcome Satan.

By Spiritual endowment—You must be filled with the Holy Spirit

The Bible commands us to continually be filled with the Spirit of God. He was, and we must also be.

By Scripture—Use your sword, the Word of God

Jesus, the submissive Son of Almighty God, filled with the Holy Spirit, when Satan came against Him, took the sword of the Spirit which is the Word of God and ran him through with the Word three times. “It is written,” He said (v. 4, 8, 12). Unsheathe your sword and use it verbally against Satan.

Jesus was satisfied in His relationship with His Father. He didn’t need to indulge His passions for possessions or power. Jesus knew who He was, what He had, and where He was going. Thus He wasn't susceptible to this flim‑flam artist and liar, Satan.

Listen to the message "How to Handle Temptations"