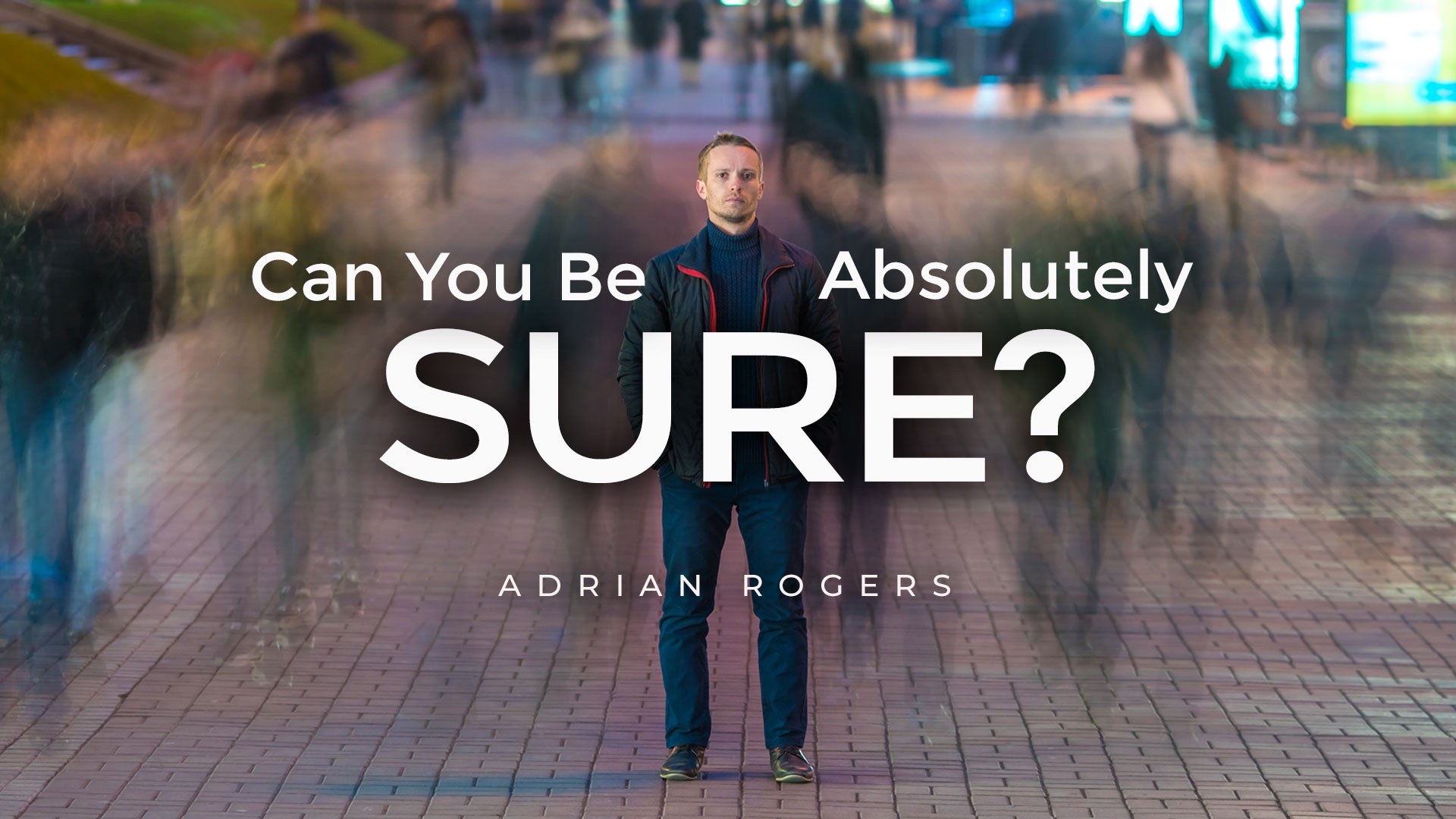 Can You Be Absolutely Sure?

Have you ever seen a child in a department store try to run up the down escalator? He tries with all his might, but it’s going down faster than he can go up. That’s what it’s like to try to be saved by your own effort. The downward pull of sin is so much greater. You’ll never make it. You can never be sure. None of us can, apart from God’s grace.

Our faith rests upon five foundational facts—five great stones of faith you need to know—expressed in five words that are the bedrock of our salvation and the basis of our assurance. You may want to underline them in your Bible:

The only way you can come to know this is by divine revelation, not because you’ve figured it out.

Before you ever got saved, God knew you would be. He foreknew because God doesn’t “learn” anything. God already knows everything. One of His primary attributes is His omniscience. When God foreknows something, He isn’t making an educated guess. He knows beyond any shadow of a doubt.

It’s hard to comprehend God’s omniscience, His foreknowledge, that He knows all things completely and before they happen because we’re looking at it from a human vantage point. We view life like a person viewing a parade through a knothole in a fence. We can’t see the full parade; we only see small segments, one by one, passing by.

But if someone says, “Come up to my office. We’ll look at it from ten stories up, the beginning, the middle, all the bands and floats, all the way to the end,” this is God’s view. He inhabits eternity. God sees the whole picture, everything at once—His vantage point.

God saw you getting saved before you accepted Christ. God foreknew it. You were in the heart and mind of God before He swung this planet into space.

“The elect” are not some hand-picked, exclusive group, but all the people who receive Jesus. They’re the “Whosoever will may come” spoken of in Revelation 22:17. God foresees them receiving Him. First Peter 1:2 helps clear this up. It says we are “elect according to the foreknowledge of God the Father.”

A boy down in West Palm Beach, Florida, was disobeying his parents, skipping school, cheating, using bad language, and getting into fights, but he heard the Gospel, repented, and asked Jesus to come into his heart. Before God ever made the world, He saw that boy accepting Jesus and said, “He’s one of My elect.” That boy is Adrian Rogers. God knew this according to His foreknowledge.

Jesus said in John 6:37, “All that the Father gives Me will come to Me, and the one who comes to Me I will by no means cast out.” One day in Heaven, Jesus will say, “Father, they’re all here, present and accounted for.”

We get confused about election versus free will because we look at it from the vantage point of time. We try to think with the mind of God. We put Him in a box we call “The Sovereignty of God” and say, “Man has nothing to do with it. God is totally sovereign. He just zaps everybody and makes them saved.” You can’t do that. The free will of man will pop out of that box.

If you put God in another box and say, “It’s all of man. God isn’t sovereign; man decides everything,” then the sovereignty of God will pop out of that box. You’re just not going to put God in a box. God is God, and we’re only looking through the knothole. We’ve never seen it from eternity.

Your election is based upon God’s foreknowledge. To “foreknow” doesn’t mean to cause. It doesn’t mean from before the foundation of the world God says, “I’m going to send this one to Hell and that one to Heaven.” An astronomer can tell you when Haley’s Comet will appear again. He foreknows it. That doesn’t mean he causes it to appear.

God knows everything that’s going to happen. He can’t learn anything. God knew from eternity I would scratch my ear this morning. Not a blade of grass moves but what He knows it. That doesn’t mean God’s great plan was for me to scratch my ear. No, that’s silly, inconsequential. I’m simply saying that God foreknows everything. He knows it all! He’s omniscient.

God foreknew that you would receive the Lord Jesus Christ. You’re elect according to the foreknowledge of God. Nothing takes God by surprise. God never says, “Oops!” or “I never thought of that.” God never makes mistakes. He is God. You can be sure of God’s foreknowledge of your salvation.

"For whom He foreknew, He also predestined to be conformed to the image of His Son" (Romans 8:29).

God predestines everyone who is born again to be like Jesus. When in His omniscience He saw you receiving the Lord Jesus Christ, He said, “I’m going to make you just like Jesus.”

Don’t get the idea God predestined some for Heaven and some for Hell. God doesn’t pick and choose who’ll be saved. He wants everyone to be saved. If you disagree, don’t argue with me—argue with Scripture:

For this is good and acceptable in the sight of God our Savior, who desires all men to be saved and to come to the knowledge of the truth. (1 Timothy 2:3-4)

The Lord is…not willing that any should perish but that all should come to repentance. (2 Peter 3:9)

How many? All. Some people say Jesus died only for the elect. Yet 2 Corinthians 5:13-15 repeatedly says, “He died for all.”

The problem isn’t that God doesn’t want people saved but that He also gives us free will. You have free will to reject Him. Jesus wept over Jerusalem,

How often I wanted to gather your children together, as a hen gathers her chicks under her wings, but you were not willing! (Matthew 23:37)

God would have redeemed them, Jesus would have saved them, but they rejected Him.

“We shall be like Him” (1 John 3:2). If this were the only verse in the Bible that teaches eternal security, I’d have to believe it. Predestination is the act of an omnipotent God who says, “It will be done. I have settled it.” What’s been settled in Heaven can’t be annulled by Hell or humanity. It’s fixed! If you’re not saved, you’ll spend eternity in Hell with the devil. But if you’re saved, you’re predestined to be like the Lord Jesus Christ.

Romans 8:30 goes on to say, “Moreover whom He predestined, these He also called.”

…God from the beginning chose you for salvation through sanctification by the Spirit and belief in the truth [when you believe the truth, that’s what makes you part of the chosen] to which He called you by our gospel…

The Holy Spirit takes the Word of God and opens the eyes and ears of those who are spiritually dead, that they might respond to the Gospel.

No one can bring you under conviction or call you to Jesus Christ but by the Holy Spirit. When you hear the Gospel, it’s God calling you. Who does He call?

If you want to be saved, God will save you today. “The elect” are the “whoever wills.”

Some say, “When God calls, you can’t resist.” They call this “irresistible grace.” Oh yes, you can. There aren’t enough angels in Heaven to make you say “Yes” to the Lord Jesus. The Holy Spirit can be resisted. Read Acts 7:51 and Proverbs 1:22-25, for example.

Irresistible grace is forced love—a contradiction in terms. To be love, it cannot be forced. You can resist the Holy Spirit if you wish. You’re free to say, “Not Your will but mine be done” and trample underfoot the precious blood of Christ. You’ll hear a brokenhearted God say: “I wasn’t willing that you perish. Not My will but yours be done,” as you drop into Hell.

Foreknowledge: God knows who will be saved.
Predestination: God says those who will be saved are going to be like Jesus.
Calling: You can be sure God has called you to salvation through the Gospel, a call that can be accepted or refused.

4. You can be sure of your justification.

When you trust Jesus Christ, you are justified (Romans 3:24, 4:5, 5:1). Justification is an act of God whereby He declares those who’ve received Jesus Christ “righteous.” You haven’t earned it. You couldn’t. Righteousness has been given to you apart from anything you’ve done. Your faith in Him alone is counted for righteousness

Justification is more than a pardon or acquittal for your sins. You’re not only pardoned; but by an act of His love, He just declares you righteous, apart from works of any kind, because you trusted in the finished work of Christ on the cross. Your iniquities are forgiven, and sin will never again be charged to your account.

Who shall bring a charge against God’s elect? It is God who justifies (Romans 8:33).

Much more then, having now been justified by His blood, we shall be saved from wrath through Him (Romans 5:9).

The only way you can be justified is through the precious blood of Jesus Christ, not by any of your own good deeds. If you could be saved any other way, Jesus would never have died on bloody Calvary. Your sin will be pardoned in Christ or punished in Hell, but never apart from the blood of Christ.

5. You can be sure of your eternal glorification.

You’ve already been glorified. Remember, in eternity, God saw you under conviction, receiving Christ, now sanctified. God is infinite when it comes to time. He isn’t looking through the knothole. He already sees you in Heaven. In His mind, you’re already there! This is why we’re eternally secure. What’s been settled in Heaven can’t be annulled or undone on Earth.

Friend, you’ve heard the Gospel. Have you answered His call, repented of your sins, and given your heart to Jesus Christ?

If you’ll put your faith where God has put your sins, on the Lord Jesus Christ, you can be absolutely, totally sure. What a marvelous future is yours. If you want that assurance now, pray something like this: