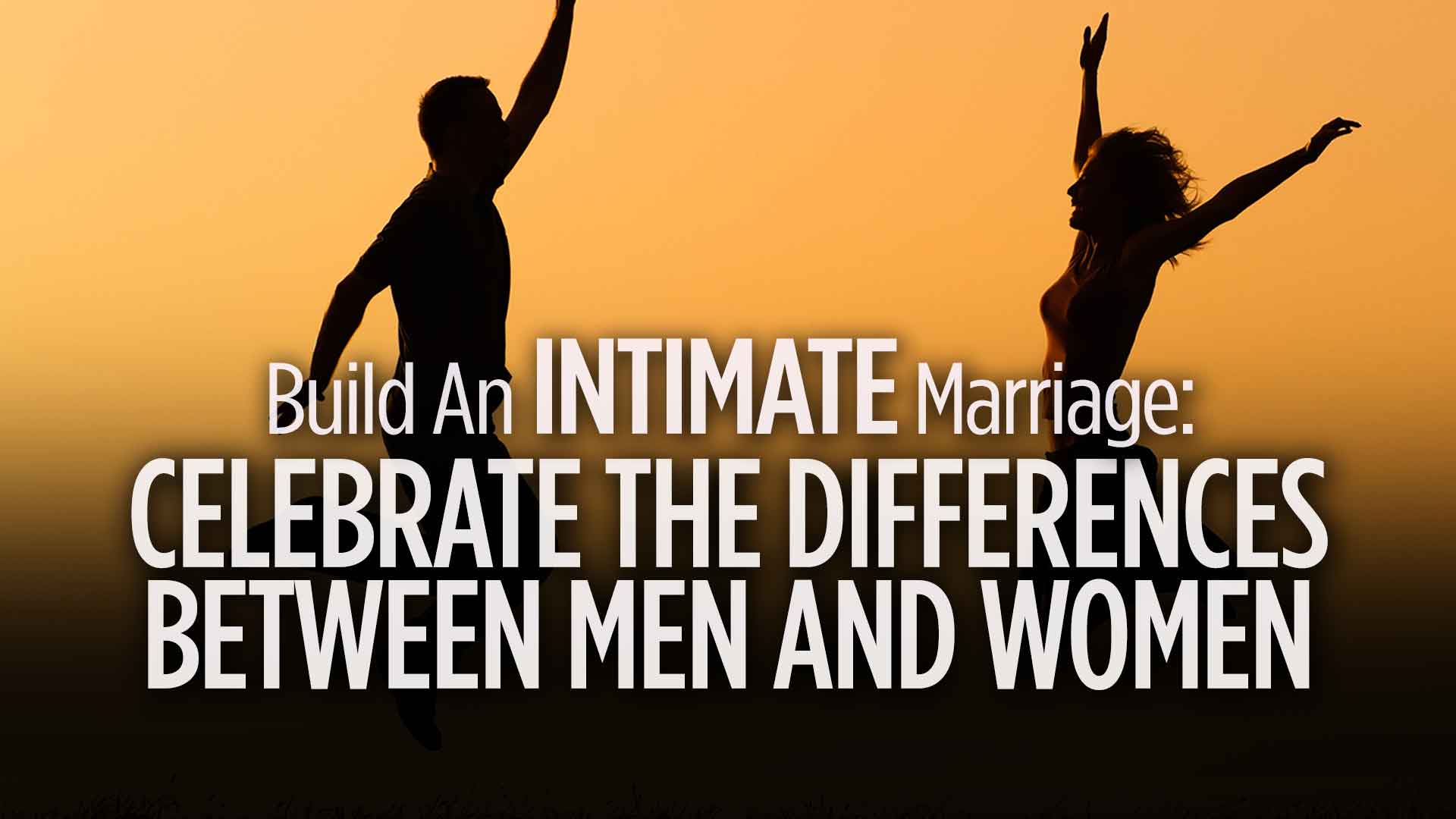 Build An Intimate Marriage: Celebrate the Differences Between Men and Women


This article is based on Pastor Adrian Rogers' message, Celebrate the Difference.

Which are better: men or women?

In Genesis 2, Adam has been naming all the animals, but he has a certain loneliness. Then God makes a woman for Adam, whom he calls Eve. “And Adam said: ‘This is now bone of my bones and flesh of my flesh’” (Genesis 2:23a). He’s saying, “She is not another animal; she is like me.” But not only did Adam like Eve because she was like him; he also liked her because she was not like him.

The differences between male and female unite us. God made us different, so that He might make us one. Here are some of these gender differences, in generalities:

The Beauty and the Beast

God made Adam stronger than Eve. Why? Because the job God gave to Adam was “to tend and keep” the garden. (See Genesis 2:15.) Adam was to be the provider and protector. He had the physical frame to protect Eve, and to dig and chop and work in the garden.

What did God make Eve to be? The name Eve means “life-giver.” God made her body to nurture, to be gentle, soft and cuddly. Being more physically fragile than Adam does not mean Eve was inferior to or less valuable than Adam. Silk is more fragile than canvass; both are useful, beautiful, and valuable.

Man, understand that God did not make you to compete with this woman, but to protect her, care for her, and provide for her.

Neither a husband nor a wife is better—just different.

The Tortoise and the Hare

Men, you have a lot more energy. Women, you have more durability. Men have more red blood corpuscles to deliver energy to cells, and bigger lung capacity. Women have better immune systems.

Husbands, don’t demand that your wife keep up with you. Don’t criticize her or call her lazy. Wives, understand the drive and energy that your husband sometimes has. Neither is better—just different.

The Romantic and the Mechanic

The job God gave men is “to tend and keep” the garden. (See Genesis 2:15.) For that, they need a hard outer shell. Women’s responsibility is to be the homemaker, to love—to be soft.

What do women read? Books that deal with relationships—most of them written by women, for women. Pick up women’s magazines, and here are the articles: “How Do You Develop Closeness with Your Husband,” “Harmony in Marriage,” “Five Ways to Achieve Intimacy,” etc. What do men read? “How to Remodel Your Garage,” “How to Double Your Gas Mileage,” “How to Be a Champion Bass Fisherman.”

Some people try to tell us that these differences are learned. But they are not—they are encoded.

Neither is better. God made us different.

The Radar and the Computer

There are two hemispheres in your brain. The left hemisphere deals with logic, reasoning, calculation, and so forth. The right deals with emotion, sympathy, and intuition. The male brain primarily uses the left side. The female brain uses both sides.

There is a real difference in the way we look at things, and this is the source of so many of our arguments. Men tend to be more logical, analytical, and factual. A woman can be, too, but at the same time, she typically mixes in more emotion.

Women do “spiderweb thinking.” She wants all of the details—and she can deal with them all at one time. Men think in a line: “Let’s clear this out, and then we’ll do that, then this...”

The left side of the brain is objective and precise. It works like a computer. The right side is subjective and works more like a radar—taking in everything. Women see things and feel things. Women can walk into a room and get details that men do not. She’s processing many little bits of information, and this produces what we call “women’s intuition.”

Which is better, the computer or the radar? Neither! Thank God for the difference.

The Code Speaker and the Reporter

Women speak in code. Don’t listen to what she says; listen to what she means. For example, if she seems tense and upset, and you say to her, “Hey, is something wrong?” She will say, “Nothing.” Guys, that means everything is wrong.

The Lover and the Achiever

“Nevertheless let each one of you in particular so love his own wife as himself, and let the wife see that she respects her husband” (Ephesians 5:33).

God gave her a nurturing instinct, but God told him “tend and keep” the garden. (See Genesis 2:15.) God equipped him mentally to do that; God gave him that hard exterior. A man wants to be admired by his wife. And she gets a blessing when he is romantic, loving, and tender toward her. Women want love and sympathy, and a man gets his joy out of being successful and being recognized as successful.

Which is better? Neither. We are just different.

There are two great supports for a healthy marriage. 1) Your foundation—your love for God and your love for one another. 2) Your flexibility—aren’t you glad that God made husbands and wives different? Isn’t it great living with a man, or living with a woman? Married couples must learn to celebrate the difference.

Other Bible Verses About Building an Intimate Marriage

Wives, likewise, be submissive to your own husbands, that even if some do not obey the word, they, without a word, may be won by the conduct of their wives, when they observe your chaste conduct accompanied by fear....Husbands, likewise, dwell with them with understanding, giving honor to the wife, as to the weaker vessel, and as being heirs together of the grace of life, that your prayers may not be hindered.

Build an Intimate Marriage: God’s Love Makes Us One

Build An Intimate Marriage: How to Handle Conflict with Forgiveness

What is a covenant marriage?

Why can marriage exist only between a man and a woman?

A Future for the Family Bible Study