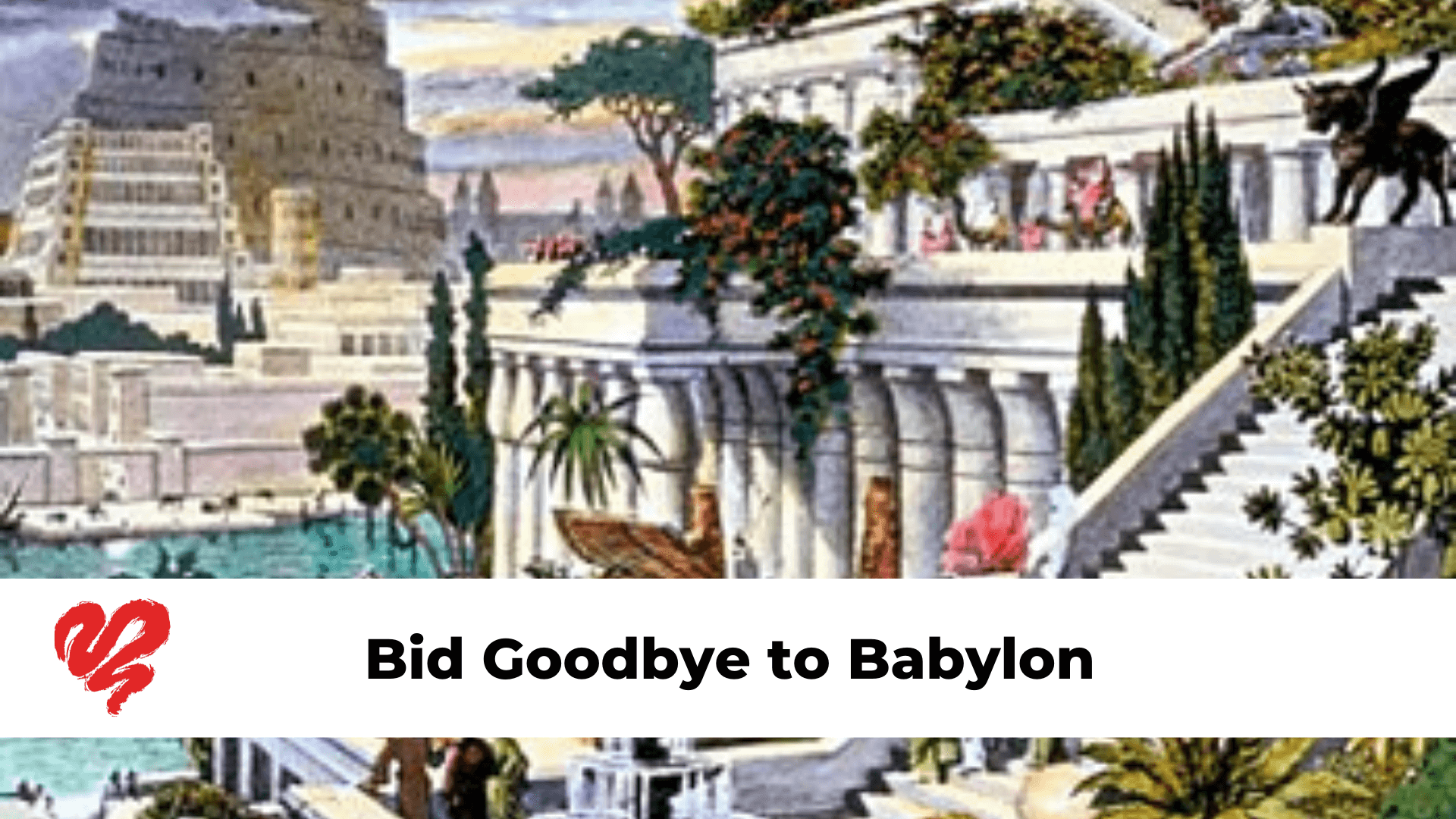 Quick question: Apart from Jerusalem, what city gets the most mentions in the Bible? If you answered “Babylon,” you’re right. It’s second only to the Holy City. But this one is the unholy city, and we are about to bid it goodbye—forever. It’s back in the news again, except today we know it by its current name, Baghdad. Ancient Babylonia of Bible times is present-day Iraq (and parts of Syria and Turkey). After the Great Flood of Noah’s day (Genesis 6-8), it was one of the earliest regions to be inhabited. Abraham knew it as Mesopotamia. When we say “ancient,” Babylon goes back to Genesis 10 when it was founded by Nimrod, a man whose very name meant “rebel.”

Why is Babylon so troublesome? Ancient Babylon’s hanging gardens were one of the seven wonders of the ancient world. But as we said previously, it may be great in antiquity, but it’s also great in iniquity. Through millennia of Earth’s history, Babylon has been a center of wickedness.

Babylon was founded on rebellion against God.

Nimrod could also be called the founder of paganism. He decided to construct the Tower of Babel. You may have heard his goal was to build a tower that could reach Heaven. The truth is, he wasn’t planning a structure that would extend past Earth’s atmosphere. No, his plan was a lofty tower having a large flat area at the top for pagan worship. This is the first time paganism appears in the Bible. Babylon is both the cradle and the grave of false religion. We see how it’s the cradle, but how is it the grave? That drama unfolds in Revelation 18.

Nimrod in Genesis is a representation of the Antichrist in Revelation. The empire he created was used by God to punish His people when they refused to obey Him. Under its King Nebuchadnezzar, Babylon was ancient Israel’s foe. The Antichrist of Revelation will be modern-day Israel’s deadliest foe. Nebuchadnezzar attacked and hauled off a large portion of God’s people to Babylon. You remember the famous story of the three young Hebrew men who were among his captives. When they refused to bow to the golden image Nebuchadnezzar built, he threw them into the fiery furnace where God Himself rescued them. The prophet Daniel was also among the captives. He lived to see Babylon conquered by the Persian empire. Then Babylon disappeared for centuries. Suddenly we see it reemerge in, of all places, Revelation, where it plays a prominent role—and not a good one—in the end times. Babylon once again is an enemy, warring against God’s purposes and people.

Ancient Babylon will rise from the dust to meet her doom at the hand of God.

Believers still alive in those days will rejoice to bid Babylon goodbye forever. In Revelation 17, future events began to head in that direction. Even today, when you take the newspaper in one hand and the Word of God in the other, you see everything fitting into the sockets of prophecy. In the future, the world will wonder at this Babylon of Revelation 18. You need to have your Bible open to that chapter and follow verse by verse.

There’s a contrast between these two.

Four things we learn when we say goodbye to Babylon:

1. Babylon is dominated by demons.

Today, Iraq and Baghdad could hardly be called “Babylon the great,” because that Babylon, the seat and the throne of the Antichrist during the Tribulation, is yet to come.

Why would the Antichrist want to go back to ancient Babylon? Because it has always been the center of demonism. Remember the principle “the criminal returns to the scene of the crime.” Nimrod, the builder of Babylon, is the forerunner of Antichrist who builds a mighty city during the Tribulation, fully given over to demonism.

You cannot understand the Tribulation unless you understand that during it the world will be infested and led by demonic spirits.

And he [an angel] cried mightily with a loud voice, saying, “Babylon the great is fallen, is fallen, and has become a dwelling place of demons, a prison for every foul spirit…” (Revelation 18:2)

There’s a double fall: after the judgment of ecclesiastical/religious (Revelation 17) comes the judgment of political/commercial (Revelation 18) Babylon. Babylon’s sins mount up to heaven. Stone by stone, century after century, Babylon built a system of iniquity. God hasn’t forgotten. For that, she receives double trouble.

Render to her just as she rendered to you, and repay her double according to her works; in the cup which she has mixed, mix double for her. (Revelation 18:6)

2. Babylon is defiant in depravity.

Satan will strut around the Earth through his servant, Antichrist, looking over his kingdom (Revelation 18:7-8). How does this affect us today? As we get closer to the Rapture of the Church and the rule of Antichrist, we can expect a tidal wave of sin, debauchery, and demonism. Satan is already strutting now.

Coming events cast their shadows ahead of time. Satan is becoming more arrogant today. The sin that used to slink down back alleys now parades down Main Street. Satan is getting bolder because he thinks he’s going to win. The wealth of former ecclesiastical Babylon is all his. He now becomes law unto himself.

Antichrist’s world economy creates a boomtown in Babylon. Global corporations will make their headquarters there. Money like Niagara Falls will flow in. No one will be able to buy or sell without the mark of the beast. In every transaction, Antichrist gets his cut.

3. Babylon is destined for destruction.

In spite of all his defiance, Antichrist cannot hold back the judgment of Almighty God.

Therefore, her plagues will come in one day—death and mourning and famine. And she will be utterly burned with fire, for strong is the Lord God who judges her. (Revelation 18:8)

Babylon will be suddenly, violently, devastatingly destroyed—cataclysmically fast, within one hour (v. 8-10). It very well could be atomic destruction. We don’t know for certain. Many things we won’t know until they are literally fulfilled. But whatever happens, it will be absolutely devastating. The sin that has been piling up for centuries will be judged. Vengeance accumulated through the centuries will come howling through the streets of Babylon.

4. Babylon is depressing in desolation.

When this occurs, the people of this world who don’t know our Lord will be depressed, thrown into chaos and despair (v. 11-23).

Executives will stand in their suites and watch as the stock market craters. Merchant ships and tankers entering the Persian Gulf will ride at anchor and watch in horror (v.15-17), all a trigger for Armageddon.

What is our take-away from Babylon and Revelation 18?

“Rejoice over her, O heaven, and you holy apostles and prophets, for God has avenged you on her!” (Revelation 18:20)