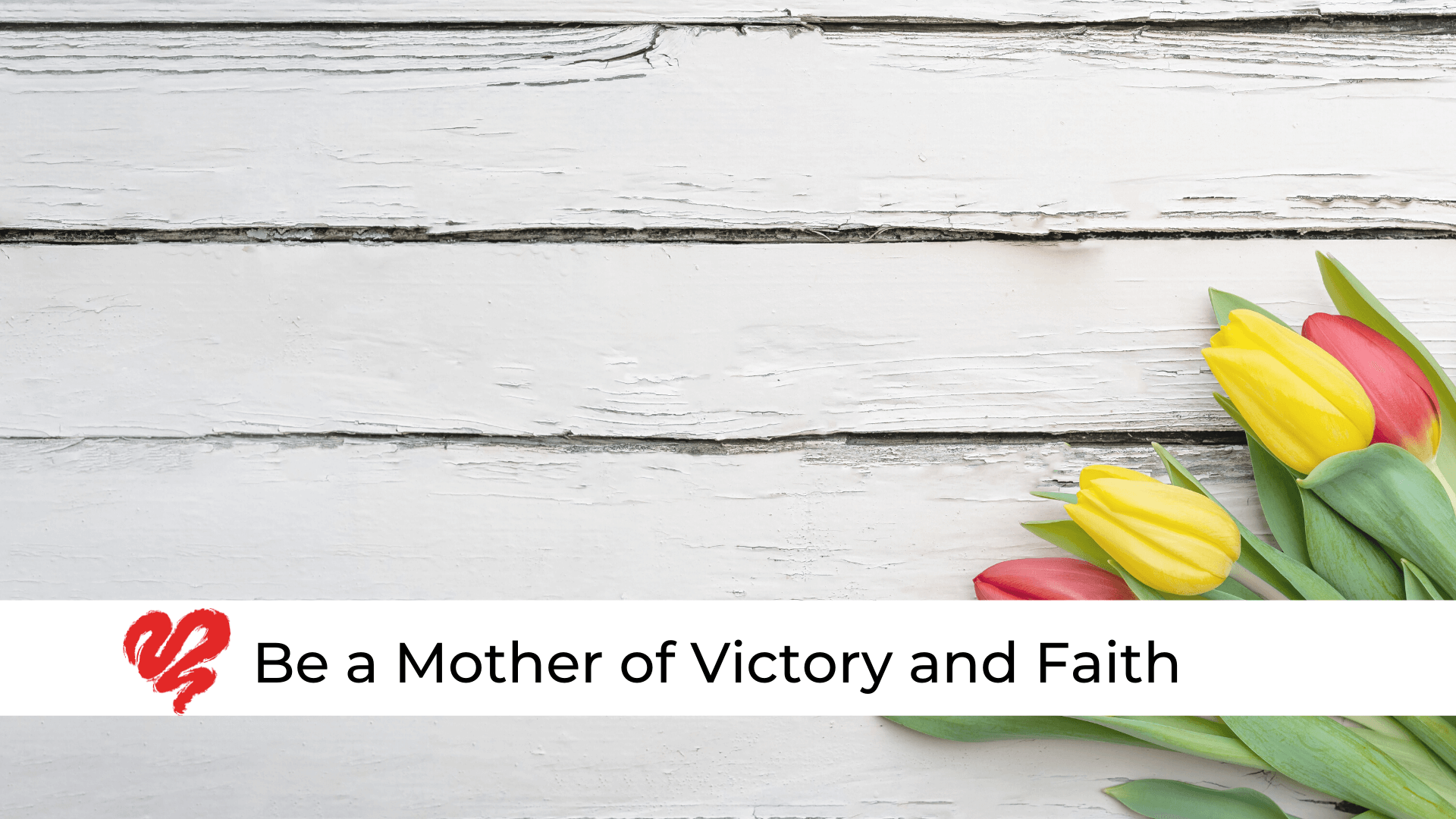 Be a Mother of Victory and Faith

People ask, “What can we do with this generation? How will we rescue them? We’d better try something new.” I disagree. We’d better try something old: return to the truth in the Word of God. It’s the only force great enough to turn this generation around. In my mind, the most powerful, influence on earth today is a godly mother’s faith and prayers. They can change the direction of her children’s lives and through them change the world. Think about that as we look at the victory of a specific mother in the Bible.

In the “Heroes of the Faith” chapter (Hebrews 11) God mentions Moses, but begins with the faith of his parents, Amram and Jochebed. Though He doesn’t call their names, He says it was their faith that helped Moses to become a great man of God.

By faith Moses, when he was born, was hidden three months by his parents, because they saw he was a beautiful child; and they were not afraid of the king’s command.

By faith Moses, when he became of age, refused to be called the son of Pharaoh’s daughter, choosing rather to suffer affliction with the people of God than to enjoy the passing pleasures of sin, esteeming the reproach of Christ greater riches than the treasures in Egypt; for he looked to the reward.

By faith he forsook Egypt, not fearing the wrath of the king; for he endured as seeing Him who is invisible…. (Hebrews 11: 23-27)

By faith Moses’ parents hid him from Pharaoh’s murderous soldiers. Moses was one of the greatest leaders in all of the Bible. His parents’ faith not only saved him from death, but his mother built his foundation in God so strong that “when he became of age” (Hebrews 11: 24), it was no longer his parents’ faith, but Moses responded from his own place of faith. With the strong start she gave him, he grew to become one of God’s greatest servants.

His mother’s name, Jochebed, means “glorious mother” in Hebrew. She lived up to her name. In the eyes of the world she was a helpless slave in Egypt. But by faith, she raised a son who changed history. If you’re a mother, may this prayer rise from your heart: “Oh God, above all things, make me a mother of faith.”

Mothers, God’s Word is full of promises to you. When God has a big job to do, faith gets the assignment. “According to your faith be it unto you” (Matthew 9:29). Jochebed and Moses embody five key aspects of being a person of faith.

Faith’s Vision gets a promise from God

Faith’s vision sees the promises in the Word of God. Amram and Jochebed saw that Moses “was a beautiful child” (also translated “fair, proper, special child”), full of potential. Every mother thinks her baby is beautiful, but this goes beyond that. They saw him through the eyes of faith, for God had told Abraham hundreds of years prior (Genesis 15:13) that his descendants would be held captive, then God would raise up a leader to bring them out. I believe when they saw this little baby, the Holy Spirit took the Word of God and said, "He is the one. He is special.”

Mothers, no one can have faith apart from the Word of God, because the Bible says,

Don’t say, “I’ve heard that before” and blow right past it. Your faith will either grow or fizzle based upon the time you spend seeking God in His Word. As Moses’ parents believed His Word, God mixed these things together in the crucible of His love and the mystery of His will.

Every child of God has a wonderful plan laid out by the will and purpose of God. Consider this verse that means so much to my wife and me:

Praise the Lord! Blessed is the man who fears the Lord, who delights greatly in His commandments. His descendants will be mighty on earth. The generation of the upright will be blessed. (Psalm 112:1-2)

Mothers, be upright so your children will be blessed. When God gives you little children, look at them and say, “Lord, they are beautiful, wonderful, a gift from you.” Yes, they can be exasperating sometimes. But see them with faith’s vision, as Jochebed saw Moses. Then get a promise from the Word of God and help them develop through your faith and instruction.

Faith turns God’s promises into action. It’s not enough to say, “I’m just going to pray a prayer over my baby, trust my child to Jesus, and it’ll be okay.” Moses’ mother took action. She hid him from Pharaoh’s soldiers after the decree to drown all newborn boys in the Nile. By faith, she did all she could do.

Jochebed didn’t resort to fatalism—“Whatever will be, will be. God, if You want him spared, spare him. If You want him to die, let him die. We’re trusting Your will.” That’s not faith, that’s fatalism. If you don’t do something, if you don’t put your faith into action, it’s not faith at all.

Jochebed didn’t resort to fanaticism. She didn’t throw baby Moses in the Nile, saying, “Lord take care of him. See our faith?” That’s not faith, that’s presumption, like picking up snakes to show God how much faith you have. Only faith, not fanaticism, works. If you want your child to be mighty for God, you’d better get to work. Moses’ mother did something about him.

There’s a difference between teaching and training. Training is to prepare for a contest, to instruct by exercise, to drill, to discipline for use. God wants us to train our children. Do you have them in a Bible-preaching church? Are you training them by example and precept in your home?

You can teach your children what’s right, but if you neglect to train them, someone will come along and teach them something else, and your child will depart. That happens many times. Parents say, “I don’t understand what’s wrong. We’ve told them right and wrong, had them in church, taught them at home. Then they went off to college and rebelled against everything.” You taught them, but you did not train them. When they are trained, it becomes a part of their life. Even in rebellion, there’s the restraining power of a mother’s love and training.

Faith’s Valor has no fear

…they were not afraid of the king’s commandment. (Hebrews 11:23)

People say, “These are such fearful, awful days.” What do you think it was like when Moses was born to slaves in Egypt? Yes, we live in desperate days. The Bible prepares us for that:

Godly people above all should be raising a godly generation to stand for the Lord Jesus Christ. Don’t be afraid. Take a position of faith for your children.

My heart breaks for children whose parents attend liberal churches, empty of faith, futile in purpose. It would be far better for a child not to go to church at all than to go to a Bible-doubting, Christ-denying church, and our world is full of them. Find a good church and get in it. If you’re in a liberal church, get out of it. If the pastor doesn’t believe the Bible is the Word of God, Jesus is the virgin-born Son of God, if he doesn’t believe in the blood atonement or the Second Coming, don’t put your children in that church. It’s dangerous.

Moses’ parents looked past the king of Egypt to the King of kings, and “were not afraid.” Times were perilous in Moses’ day; our times are perilous. But thank God for mothers and fathers of faith.

By faith Moses, when he was come to years, refused to be called the son of Pharaoh’s daughter (Hebrews 11: 24).

God miraculously answered Jochebed’s faithful prayers. Not only was Moses’ life spared, but Pharaoh’s daughter adopted him, hiring Jochebed to nurse and tend her own child—for pay! Jochebed sang the songs of Zion, instilling in Moses a love for God. You talk about victory—God intervened!

Jochebed had made a little ark out of reeds, placed her baby in it, and said, “God, this is all I can do now.” When we pray, when we believe God, He can take a little ark and make a battleship out of it to sink Pharaoh’s kingdom! Isn’t God wonderful? Faith is the victory that overcomes.

As the son of Pharaoh’s daughter, Moses would have been next in line for the kingdom. But he chose “rather to suffer affliction with the people of God than to enjoy the passing pleasures of sin…” (Hebrews 11:25)

Moses had an incredible value system. He could have been king of all Egypt. On one hand, he saw the treasures of Egypt; on the other, the glories of Christ. “If I go this way, I’ll have power, possessions, prestige. If I go the other, I’ll have the God of Abraham, Isaac, and Jacob.” He made a value judgment: “I’ll go the other,” choosing to suffer affliction with God’s people, valuing the reproach of Christ more highly than all the pleasures of Egypt.

Moses had gone to the University of Egypt and “was learned in all the wisdom of the Egyptians” (Acts 7:22). But a mother of faith trained him day by day, putting something in his heart all those professors couldn’t take away.

A great battle rages over values. It’s foolish to try to get your children to make a decision unless they have something to decide. Instead of telling your children “Don’t do this or that,” ask yourself: “What have I given them that’s better?” Show them the riches of Jesus, the beauty of Christ. Then when the moment of decision comes, they’ll say, “I don’t want Egypt. I choose Christ.”

Mothers, faith’s values will last even after you are gone. May you put in the work to become—and allow God to make you—a mother of faith.