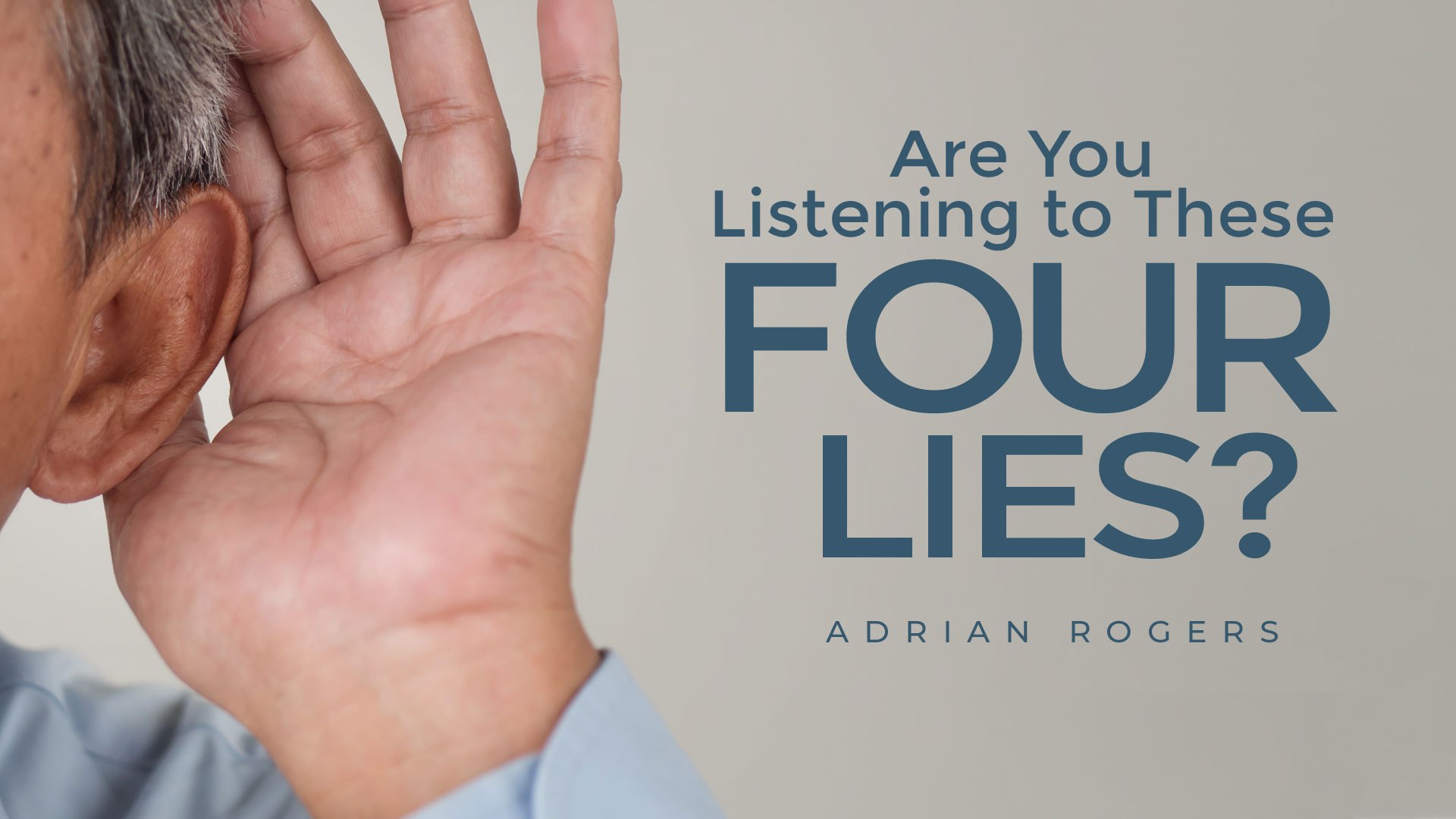 Are You Listening to These Four Lies?

What do you think the four biggest lies that ruined the world could be? Communism? Humanism? New-ageism (or a whole bunch more ism’s)? Evolution? In Genesis, we find four lies bigger than all of these, and they came straight out of the mouth of Satan.

The Father of All Liars

Out of these foundational lies, all other lies were spawned—by the father of liars himself, the devil. Satan’s whole system is built on a lie. Jesus said in John 8:44,“… He was a murderer from the beginning, and abode not in the truth, because there is no truth in him…. He is a liar, and the father of it.”

Satan wants to bring death, not life, misery, not joy, turmoil, not peace, sorrow, not happiness, famine, not fruitfulness. He wants to bring physical, spiritual, and eternal death. And he does it through deception.

His motive: murder.
His method: lying.

Remember, Satan is the master liar. He knows how to tell lies. They’re clever, not obvious on the surface. The best lies sound most like the truth. There’s some truth in most lies, and that makes them more dangerous. Which clock is more dangerous: one that’s 5 minutes off or 5 hours off? You glance at a clock that’s 5 hours off and know immediately it’s wrong. But a clock that’s 5 minutes off is so close to the truth, it can cause you to miss your airplane. Satan’s lies are close, yet so far from the truth.

Satan isn’t interested in telling lies about little things. He wants you to believe lies about the biggest subject of all—God. If Satan can get your mind twisted about who God is and the trustworthiness of His character, then he has you.

Here in the first pages of history, Genesis 3, Satan tells four big lies attacking God’s character. You meet them every day; they’re fresh and up to date.

God made the beautiful Garden of Eden and told Adam and Eve they could eat freely of any tree except for one. Satan comes along and implies that God had said they could not eat of the fruit of the trees of the garden. That was a lie. God said they could eat freely of every tree in the Garden except the tree of the knowledge of good and evil. To all the goodness God had created Eden—all its luxury, beauty, and bounty—God said, “There, children, that’s for you. Help yourself.” Satan says, “God says you can’t have it,” trying to get Eve to think negatively about God, that He’s cruel, harsh, unloving, and wants to deny you any ultimate joy and pleasure. The truth is, God had said a resounding, “Yes!” to their joy and pleasure.

Many people today think God is a cosmic killjoy. They think that God is trying to keep things from us. They believe that God is some sort of vengeful deity, sitting up there on His throne, hurling down laws to make us squirm like a worm in hot ashes trying to keep them. That’s not true. God loves us.

By planting seeds of doubt, Satan wanted Eve to believe God was withholding goodness from her; therefore, God Himself was not good.

By casting doubt on His truthfulness, Satan wanted Eve to believe God had lied to her. His question mark (“Has God said?”) implies God’s Word cannot be trusted. But 1 Timothy 6:17 says to “... trust in the living God, who gives us richly all things to enjoy.”

Any person, be it teacher, professor, pundit, or pastor, who causes skepticism about the authority, accuracy, infallibility, and authenticity of what God has actually said is doing the work of Satan. Undermining the truthfulness of the Word of God is the work of the devil I don’t care if the person doing it is a seminary professor, if he puts a doubt, question mark, or denial after the Word of God, he is of the devil. Satan introduced relativism, rationalism, pragmatism, post-modernism—all based on lies about God. Today’s society has been infected by these substitutes for the truth of God. The big daddy liar is behind them all.

Satan’s next lie: God is not really going to punish sin. You don’t have to worry about facing judgment. Now I want to tell you, friend, God is good and loving, but God is also righteous. If you preach the love of God to the exclusion of the holiness and righteousness of God, you’ve only preached half the truth. With his “you shall not surely die” response, Satan wanted Eve to believe God wouldn’t really hold Eve’s sin against her. Some people think, “God is too good to punish sin.” He’s too good not to punish sin. He is holy and righteous.

Let me address those who doubt eternal punishment. I would be unfair to you as a preacher if I did not tell you there is an eternal Hell. If you die having rejected Jesus Christ as your personal Savior and Lord, you’re going to go to Hell. A righteous God will not let sin go unpunished.

Satan’s scheme was for Eve to believe God’s plans for her weren’t good, and she should look out for herself. He tells Eve, “If God isn’t gracious, or good, or truthful, you don’t need to fear Him. You should experiment a little bit. Work your way up, till you are like God. Now, Eve, you can never be all you ought to be until you become autonomous. You don’t need to depend upon God.”

But what is the truth about God’s desires for us? He graciously desires the best for us.

“For I know the plans I have for you,” declares the LORD, “plans to prosper you and not to harm you, plans to give you hope and a future” (Jeremiah 29:11).

“Eye has not seen, nor ear heard, neither has it entered into the heart of man the things which God has prepared for them that love Him” (1 Corinthians 2:9).

How to Deal with Satan’s Lies

If Satan is out to deceive us, how do we overcome him? Revelation 12:11 gives us three ways: “And they overcame him by the blood of the Lamb and by the word of their testimony, and they did not love their lives to the death.”

The blood of the Lamb. On the cross, Satan’s back was broken. He’s exposed—a fake, fraud, and imposter. But you’ll never overcome him until you come to Jesus and trust Him for your salvation. Have you come to Him for salvation?

The word of their testimony. This is not just standing up and saying, “I want to tell you what Jesus has done for me.” The word of our testimony is the Word of God, the Bible. Bring the Word of God against these lies. Quote the Word, as Jesus did in Matthew 4. It’s a sword—a weapon of attack. This is the only way you will defeat Satan. Know the Bible. The Word of God pulls the veil of darkness away and exposes Satan’s lies.

Total surrender. “They loved not their lives unto the death.” Determine you will serve God even if it costs you your life. They said, “I’m going for God even if I die serving Jesus.”

Have you been thinking God isn’t good? Running from God? God is good. You should be running to Him. Have you thought God isn’t truthful? Have you thought that the Bible has errors, and somehow you can do it some other way? Have you hoped you can just skate on through and you’ll never come to judgment?

It’s a lie from Hell. God is gracious, truthful, righteous. Have you feared God doesn’t have a wonderful plan for you? He does. “For by grace you have been saved through faith, and that not of yourselves; it is the gift of God” (Ephesians 2:8). I want you to know Him, and you can know Him.

If you’re not certain you’re saved, I want to guide you in a prayer right now, and you can ask Christ to come into your heart.