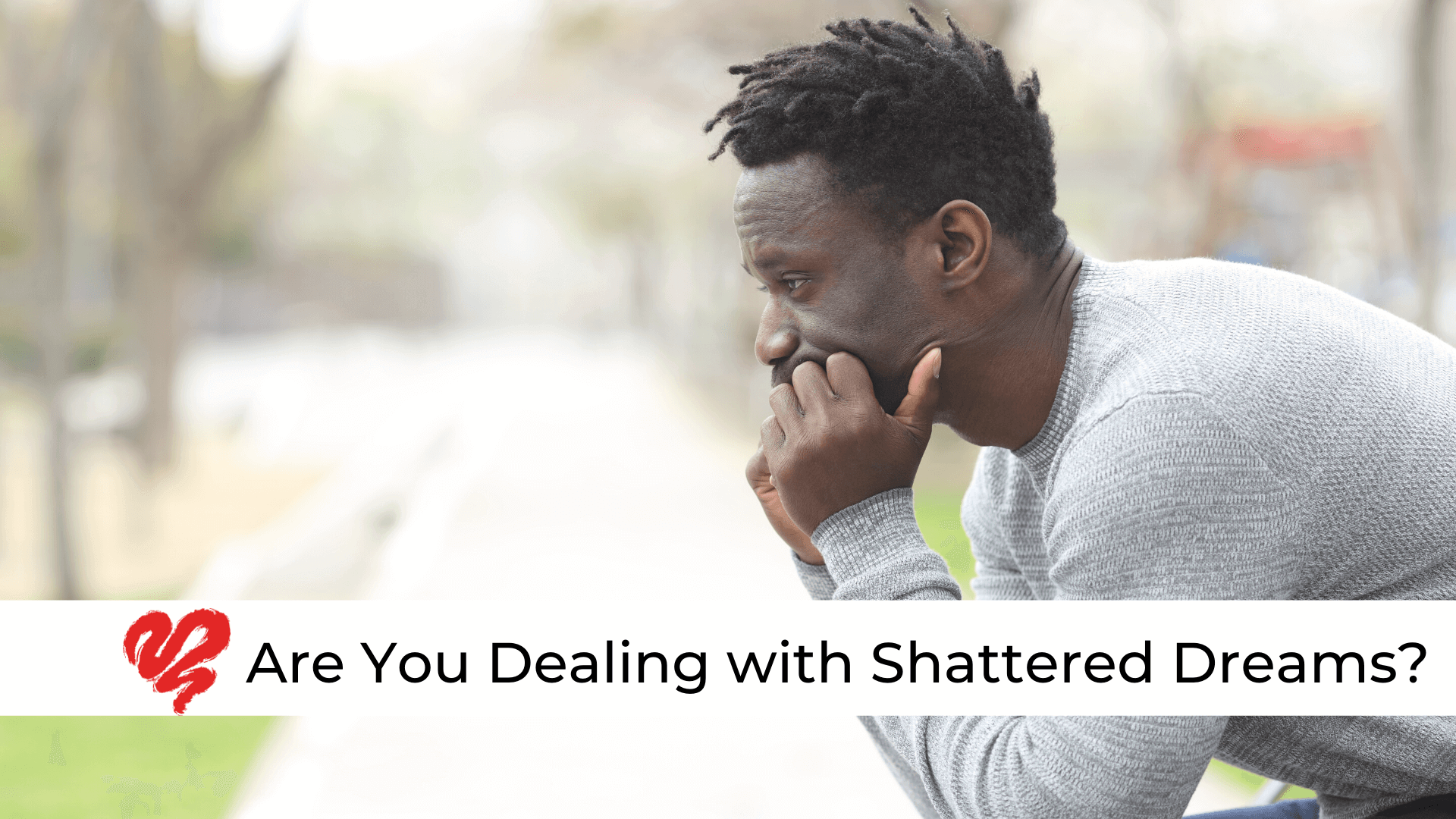 Are You Dealing with Shattered Dreams?


This article is based on Pastor Adrian Rogers' message, Practicing the Presence of God.

It was a Sunday afternoon on Mother’s Day when Joyce and I lost our little baby Philip to crib death. As we drove later that day to be with our family, we passed by the little church I pastored, holding its evening service. We heard them singing, “No, never alone, no, never alone. He promised never to leave me, never to leave me alone.” I would not take anything for the conscious presence of God.

A young man named Joseph had a life that was an unexplainable miracle apart from the presence of God. Throughout his story, you hear the refrain: “And God was with him, and God was with him,” in some unspeakable situations. Yet he never lost sight of his dreams.

You say, “Well—you don’t know how bad it is for me. My dreams are shattered.” Have you been thrown into a pit by your brothers, then sold into slavery? Trafficked to a foreign country? Falsely accused of rape and thrown into prison? You believe your life’s dreams are over. But the greatest tragedy would be to come to your deathbed and find you’ve never lived. Jesus said, “I have come that you might have life and have it more abundantly” (John 10:10).

Joseph is the most Christ-like character in the Old Testament. We can learn much from him. Here’s an astounding fact about the book of Genesis: It tells the story of earth’s creation in only two chapters, the creation of the stars in only five words (“And He made the stars also,”) but one-fourth of Genesis—fourteen chapters—is devoted to one young man, Joseph.

If you’re not familiar with his story, here’s a thumbnail sketch: Joseph’s mother died in his mid-teens. Joseph dreamed that his brothers and even his father would one day bow down before him. Joseph was his father Jacob’s favorite son. His dad unwisely made it no secret. His ten older brothers became so jealous, especially after Jacob gave him a beautiful multi-colored coat, that they imprisoned him in a pit and sold him to a passing trade caravan, which hauled Joseph off to Egypt, He became a slave to one of Pharaoh’s officers, Potiphar. But God was with Joseph—Potiphar appointed him head of his household and Potiphar greatly prospered. Potiphar’s unfaithful wife tried to entice Joseph into an adulterous affair. Rejected her, he fled, but she convinced Potiphar that Joseph tried to assault her.

Immediately cast into prison, Joseph languished, not for doing something wrong but for doing something right—keeping himself pure. But God was with Joseph—once again he rose to a place of authority in the jail! He helped a man get out of prison who promised, “I know you’re innocent. I’ll speak a word for you when I get out.” But he forgot; Joseph was left rotting in prison again. But God was with him—one day Pharaoh himself had two disturbing dreams which not even Egypt’s soothsayers could make heads or tails of. Pharaoh’s servant suddenly remembered Joseph. He was quickly summoned from jail to Pharaoh’s court to interpret the dreams: seven years of plenty and seven years of famine lay ahead.

Pharaoh knew what to do—put Joseph in charge of famine preparations. The teenage boy who was sold as a slave kept rising and rising until Pharaoh made him prime minister of Egypt. When famine struck just as Joseph predicted, including back at Joseph’s childhood home, his wise planning kept not only Egypt alive, but his family too. His brothers arrived to buy food for the family, never imagining they’d soon be bowing down before the same brother they’d betrayed years before. You should read the dramatic story for yourself in Genesis 37-50. It’s like the script of an Oscar-winning movie.

You see this phrase over and over: “And the Lord was with Joseph…” No matter what happened, Joseph was practicing the presence of God.

Do you want real prosperity? Not necessarily wealth, but prosperity? Prosperity is the progressive realization of the will of God for your life.

Here are four principles from Joseph’s life for realizing the fulfillment of your God-given dreams:

Don’t try to hide it. When God saved you, He made you different. Joseph was distinct because of his nobility. We are nobility in the Lord Jesus Christ. The Bible says we are “a chosen generation, a royal priesthood, God’s own special people” (1 Peter 2:9).

A child of God is different. The world resents our nobility in the Lord Jesus Christ and wants to squeeze us into its mold. What we believe starts at a different source, follows a different course, and ends at a different conclusion. We’re twice-born people in a one-born world. You’ll be going against the tide most of the time. Like Joseph, you should stand out like a diamond against dark velvet.

Joseph was just a teen, but God put a dream into his heart. He may speak to you some other way. But the point is, God has a plan for your life. I was about Joseph’s age when He called me into the ministry. I wanted to know His plan. I said, “Lord, I don’t know what You want me to do, but show me Your will. Whatever it is, I want to do it.”

If you want to know God’s plan for you, here’s how to find it:

I beseech you therefore, brethren, by the mercies of God, that you present your bodies a living sacrifice, holy, acceptable to God, which is your reasonable service. And do not be conformed to this world, but be transformed by the renewing of your mind, that you may prove what is that good and acceptable and perfect will of God. (Romans 12:1-2)

That is the key.

I’m not talking about carnal ambition. God hasn’t promised to fulfill your fantasies. He has a better dream for you: “For I know the thoughts I think toward you,” says the Lord, “thoughts of peace and not of evil, to give you a future and a hope” (Jeremiah 29:11).

How can you tell if your dream is God-given? Think about it. Pray over it. Ponder these things in your heart.

One of my favorite verses is Proverbs 4:18, “But the path of the just is like the shining sun, that shines ever brighter unto the perfect day.”

Sometimes you don’t know the will of God for your life or even for your day. Before dawn, it’s dark, then some gray appears. As the sun rises, you begin to see colors and shadows. But by high noon everything’s crystal clear. Soak your dream in prayer. Commit to memory Proverbs 4:18. Ask God to guide.

When there’s a God-given dream, there will be some God-given difficulties. Joseph was hated by his brothers, thrown into a pit, sold as a slave, falsely accused, and languished in prison. Was God out of control? Not for a second. God allows difficulties; He doesn’t cause them. God didn’t cause Potiphar’s wife to accuse Joseph of rape. But wherever man rules, God overrules. When it was all over, Joseph said to his brothers, “But as for you, you meant evil against me; but God meant it for good, in order to bring it about as it is this day, to save many people alive” (Genesis 50:20).

Did you have a dream but your dream is now shattered? That doesn’t mean God is out of business with you. If you’re in an impossible situation, I want to tell you: God is over it all. No matter what Satan does, no matter what happens, God is in control of this world. Get a lock on that.

You’ve got the dream. You’ve got the difficulties. But you also have a dynamic force given to you. That powerful force, Almighty God, was with Joseph every step of the way. “And God was with him” (Acts 7:9).

Like Joseph, I want there to be something about me you cannot explain apart from the fact that God is with me. Through sorrows, through sickness, I don’t want God to take His hand off our lives.

God is in Christ, and if you want God with you, you need Jesus.

Practicing the Presence of God (2247)

Practicing the Presence of God (2247)

Why Do Good Things Happen To Bad People? Booklet