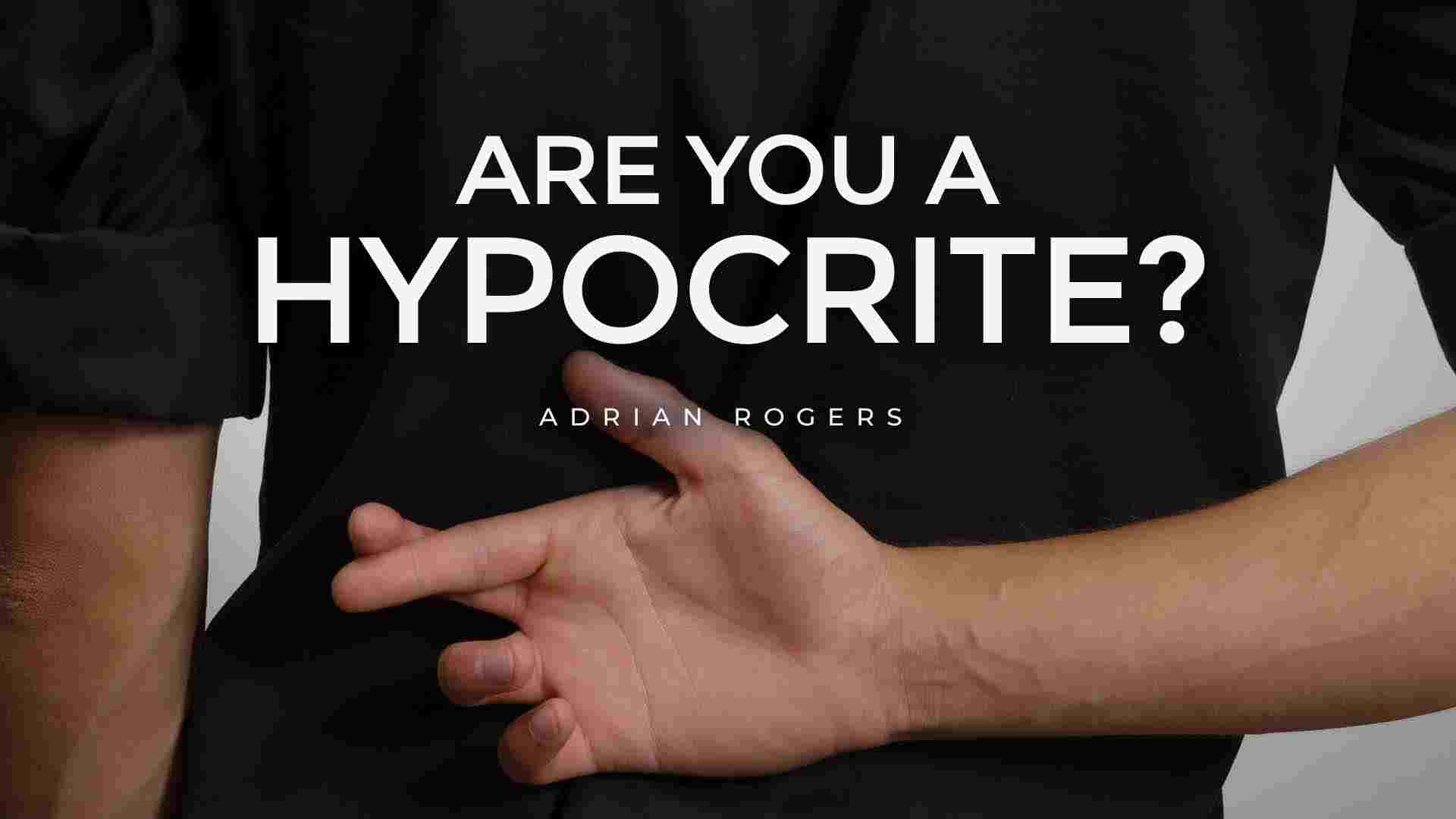 Are You A Hypocrite?


This article is based on Pastor Adrian Rogers' message, How God Handles Hypocrites.

Have you encountered a hypocrite? It’s easy to run into them these days. When you figure out what they are, the good you first saw on the outside is canceled by what’s on the inside. People who profess to be religious seem particularly agile at pretending to be what they aren’t. Both religion and politics are fertile soil for hypocrites. How does God handle them? Jesus didn’t mince words. He called them “white-washed sepulchers (or ‘tombs’).”

In Romans chapter one, we see how God deals with those who make no pretense of faith—the heathen, the skeptic, the out and out rebel. But how will He judge the great pretenders—those who look so good and perform so well? The outward appearance hides what’s on the inside. To the earnest sinner seeking answers, Jesus was kind and compassionate. But He had little patience for the façade of the phony Christian.

If you’ve let a hypocrite keep you from Jesus, I pray you won’t allow it any longer. As you navigate our current culture, whenever you encounter hypocrites, remember: “The Lord does not see as man sees; for man looks at the outward appearance, but the Lord looks at the heart” (1 Samuel 16:7).

God sees right through those things people adorn themselves with to look good.

Paul talked about “they” in Romans 1—the flat-out unbeliever of any stripe. When he wrote about them, the down and out, he knew the up and out would love it. The uppers were indignant at the sins of the lowers but happy to overlook their own. Then follows Romans 2. It would either offend the self-righteously religious or go right over their heads.

Most hypocrites are unaware that the devil had rather send them to Hell from a church pew than the gutter. We need a strong dose of reality, which the Lord Jesus certainly gave to the religious leaders of His day.

Paul begins chapter 2 talking to believers, or to those who think their pious religiosity, bright on the outside, hollow on the inside, keeps them in good standing with God. He’s saying “you” to the hypocrite.

“Therefore, you are inexcusable, O man, whoever you are who judge, for in whatever you judge another, you condemn yourself; for you who judge practice the same things. But we know that the judgment of God is according to truth against those who practice such things. And do you think this, O man, you who judge those practicing such things, and doing the same, that you will escape the judgment of God” (Romans 2:1-3)?

The words “judge” or “judgment” appear six times in the previous three verses. We are the “you” in this when we judge others from our own imperfect perch. We measure ourselves by other people, but God measures us by a higher standard—Himself. We’d better examine ourselves, because yes, even followers of Christ can be guilty of hypocrisy, myself included. “Faults in others I can see, but praise the Lord, there’s none in me.”

You cannot get away from the reality of judgment in Romans 2. Paul speaks of “the day of wrath and revelation of the righteous judgment of God” (Romans 2:5) and “the day when God will judge the secrets of men by Jesus Christ” (Romans 2:16). This is the judgment facing hypocrites who judge others when they’ve never met the Lord themselves.

“Hypocrite” in Greek means a stage actor or pretender. In Jesus’ time, actors wore masks. If their characters were supposed to be happy, they put on happy masks; if sad, they put on sad masks—they wore disguises. Paul says hypocrites will be judged by the truth. God will pull off their masks. No pretense—truth will be the standard.

God has written a Bible; it’s called the Word of truth (John 17:17). God has given us His Holy Spirit; He’s called the Spirit of truth (John 14:17). God is building His Church; He calls it the pillar and ground of truth (1 Timothy 3:15). God sent His Son; His Son is the truth (John 14:6). The apostle John wrote: “I have no greater joy than to hear that my children walk in truth” (3 John 1:4). Truth has fallen by the wayside today, but God knows the truth and will judge every hypocrite by the truth, no matter what position in life he holds.

A hypocrite has three fatal flaws in his thinking:

Flaw #1—“Outward appearance is all that matters.”

Two things are true: if people experience trouble, it’s not necessarily because God has judged them. And if you are currently out of trouble, don’t think for a moment God is not going to judge you. Blessings don’t mean what you think they mean. God gives you blessings to bring you to repentance (Romans 2:4). If you don’t respond to His goodness, it only makes your judgment more severe. If you’re being blessed, l beg you to come to the Lord Jesus Christ.

No, one day judgment will come. God will ask, “What did you do with the blessings I gave you? You didn’t come to Me in repentance; you hardened your heart.” The righteous judgment of God is coming (Romans 2:5). You won’t escape (Romans 2:3). He will rip off the mask.

How will God judge us?

You’re not saved by your works, but you will be judged by your works. God will judge everyone by their actions, attitudes, and advantages. Paul brings it home by saying there’s no difference whether you are Jew or gentile, high or low. There is no respect of persons with God. He doesn’t play favorites, “for all have sinned and come short of the glory of God” (Romans 3:23). Every person is guilty before God—and that’s why we must have a Savior.

Whatever the race, place, or face, it’s a matter only of God’s grace. Who you are means nothing. It’s whose you are. That’s why Jesus told Nicodemus, an outstanding man by every appearance: “Without being born again, you cannot even see the Kingdom of God” (John 3:3).

God doesn’t grade on the curve. He demands absolute perfection, and none of us can provide that. That’s why He provides, and we must accept, the righteousness of Jesus Christ, given when we put our trust in Him.

We’ll be judged by our attitudes (Romans 2:6-7). Some are seekers. Others are scorners. If you look for something to criticize, I guarantee you’ll find it. But If you come sincerely, you’ll find God, because He is standing, knocking at your heart’s door.

We’ll be judged by our advantages. Millions on earth sit in darkness, having never heard the name of Jesus. You have heard, and “to whom much is given, much will be required” (Luke 12:48). How tragic to go to Hell from an air-conditioned church.

God will also judge all people by how they responded to the Gospel (Romans 2:16).

The Gospel is the death, burial, and resurrection of Jesus Christ (1 Corinthians 15:1-4), and if you have not received the Gospel for salvation, Jesus Christ will be your judge and mine.

It may shock you to learn that God the Father doesn’t judge anyone. He has entrusted the prerogative of judging to His Son. If you don’t receive Him, the same Jesus who wants to be your Savior will one day be your Judge. “For the Father judges no one, but has committed all judgment to the Son” (John 5:22).

Note this carefully. One day you will meet Jesus Christ: “He [God the Father] has appointed a day on which He will judge the world in righteousness by the Man whom He has ordained. He has given assurance of this to all by raising Him from the dead” (Acts 17:31).

If you don’t meet Him in salvation, you’ll meet Him in judgment; the hypocrite picks death from the tree of life. In agony and blood, Jesus died upon that cross for you, but the hypocrite wraps himself in robes of self-righteousness and will not receive the Lord Jesus Christ. It’s not that he cannot be saved but that he would not be saved.

One day God will reveal your heart. He will open doors and skeletons will come out of the closets. Secrets repressed, sins committed—long forgotten—will be revealed. God is keeping books on every idle word, every thought, every deed.

Put your eyes on Jesus. If you let hypocrites keep you from Jesus, you’ll spend all eternity with every one of them in Hell. Give your heart to Jesus. Give Him all your life. Don’t be whitewashed, be washed white by the blood of Jesus.

If you’re not saved, cast yourself on the mercy of God. He wants to save you today. He’s knocking at your heart’s door. There’s no one so bad he can’t be saved and no one so good he need not be saved. Simply pray, “Lord Jesus, I need You. Today I open my heart. Right now, I receive You as my Lord and Savior. I yield You my life. I trust You, Jesus, to save me.”