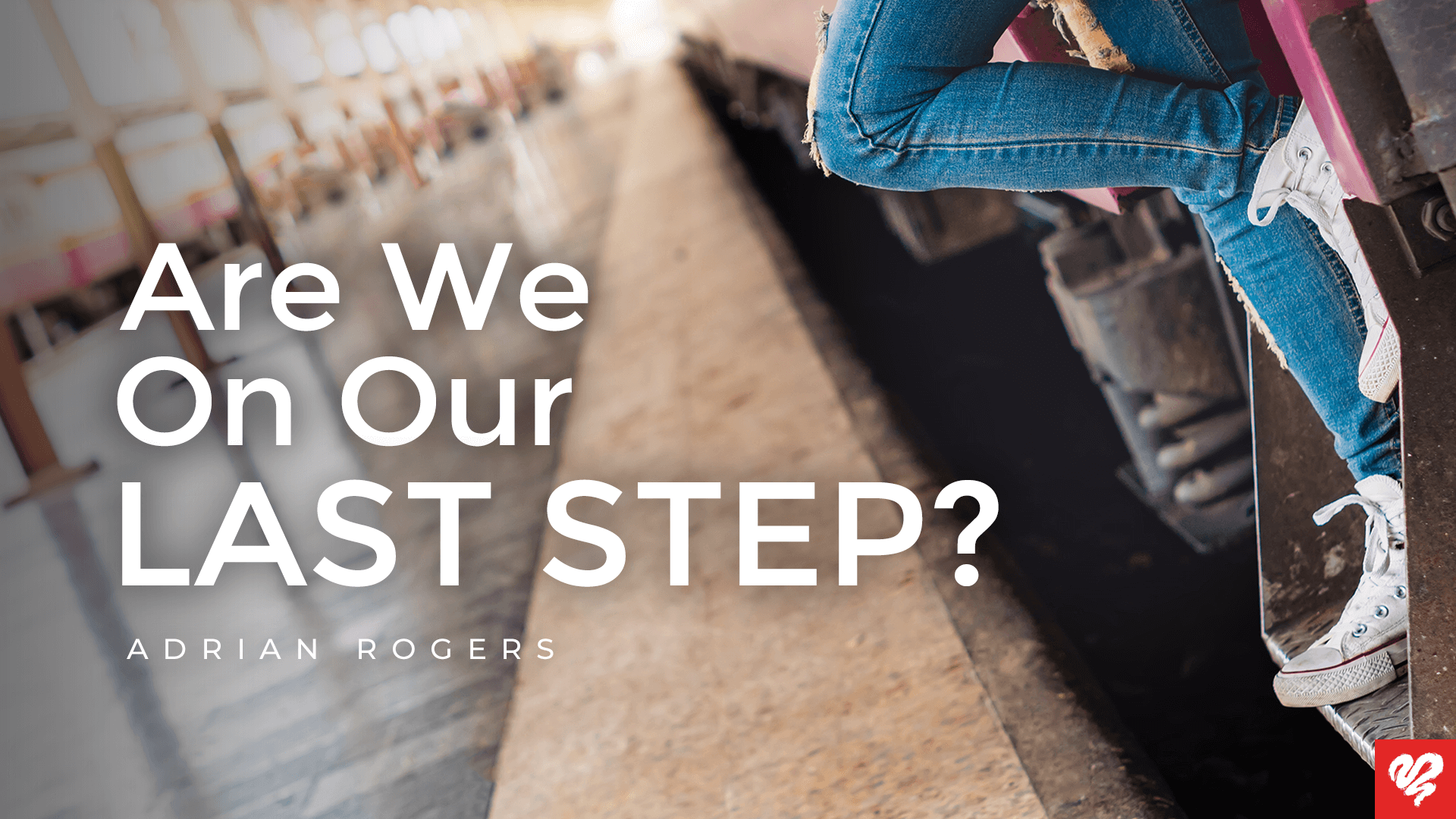 Are We On Our Last Step?

We live in days where every basic tenet Christians uphold is being shaken. We need something solid to stand on. This day of wickedness is described in Scripture as the last step down for any person or nation. The Apostle Paul exposed that last step. He needed believers to understand just how bad sin is—just how lost a nation can be. Paul’s letter to the Romans is intended to give us a sure foundation. The Gospel is good news, but before you can appreciate the good news, you have to hear the bad news.

Romans chapter 1 lays out that bad news, the causes and terrible consequences of sin. If we want people to be saved, we must first help them understand they’re lost—and just how lost they are. Our nation needs to hear the book of Romans because most Americans are egomaniacs—peacocks strutting to hell, thinking they’re too good to be damned.

In Romans 1:24-25, Paul explains what happens to men and women when they reject God.

Therefore, God also gave them up to uncleanness, in the lusts of their hearts, to dishonor their bodies among themselves, who exchanged the truth of God for the lie and worshiped and served the creature rather than the Creator, who is blessed forever. Amen.

You say, “God gave up on them?” Yes. “What did He give them up to?” To dishonor their own bodies. He’s talking about sexual sin. Continuing in verses 26 and 27, Paul said,

For this reason, God gave them up to vile passions. For even their women exchanged the natural use for what is against nature. Likewise also the men, leaving the natural use of the woman, burned in their lust for one another, men with men committing what is shameful, and receiving in themselves the penalty of their error which was due.

And even as they did not like to retain God in their knowledge, God gave them over to a debased mind, to do those things which are not fitting; being filled with all unrighteousness, sexual immorality, wickedness, covetousness, maliciousness; full of envy, murder, strife, deceit, evil-mindedness; they are whisperers, backbiters, haters of God, violent, proud, boasters, inventors of evil things, disobedient to parents, undiscerning, untrustworthy, unloving, unforgiving, unmerciful.

Each time Romans says “God gave them up” or “God gave them over,” the context is sexual sin. When a nation no longer upholds basic sexual morality, God says, “That’s the last step. I give up.” He gave them up to dishonor their own bodies. Of all the “unrighteousness” named in Romans 1:26-31, sexual immorality tops the list.

America is in crisis. Without a moral rebirth, we will join the graveyard of nations. Someone else in addition to Paul wrote about Rome a while back. Edward Gibbon, author of “The Rise and Fall of the Roman Empire” said when the empire came crashing down, the number one factor that destroyed Rome was sexual immorality. Another man wrote, “Rome dug her grave with her teeth, killed herself with illicit sex, and embalmed herself with alcohol.” America is doing the same.

Today what’s said about immorality, adultery, and illicit sex is that it’s not really a sin. We see it in our entertainment, read it in our newspapers, and yawn with nonchalance. Immorality is no big deal.

The new virtue in America is not purity, fidelity, honesty, or faithfulness—it’s tolerance. The new sin is to say sin is sin, wrong is wrong. Those who speak the truth about sin are “narrow” and “bigoted.”

The moral breakdown has become so bad that it’s no longer enough to keep your children away from X-rated films. Now we have to turn off the news to protect them from X-rated reports.

People say, “Wait. Don’t you know Americans approve of all this? Look at the way they vote.” We’ve voted in immorality. We’ve come to “morality by majority,” like those travelers in Plato’s “Republic” who lost their direction. Rather than steering by the map and the stars, they put a lantern on the ship’s bow and steered by that. That’s where we are, yet God’s Word is so clear: “You shall not commit adultery” (Deuteronomy 5:18).

I’m concerned about the world our children and grandchildren will grow up in if the Lord tarries—what they’ll hear and accept from today’s world. This is why God laments,

Oh, that they had such a heart in them that they would fear Me and always keep all My commandments, that it might be well with them and with their children forever! (Deuteronomy 5:29)

Those engaging in immorality are reaping bitter fruit in their lives, but the double tragedy is, they’re missing God’s best—His plan for them.

Marriage is for a lifetime, and sexual faithfulness is the key that holds a marriage together. A nation cannot endure without morality. We’ve been told it takes a village to raise a child. That’s backward. It takes a home to raise a child; it takes homes to make a village. Unless our homes are sound, we’ll have no village. God says the fundamental, underlying basis of all society is the home, and the underlying basis of the home is sexual fidelity.

The Lord Jesus put this matter right up front. Quoting Genesis 2:24, He said, “For this reason, a man shall leave his father and mother and be joined to his wife, and the two shall become one flesh” (Matthew 19:5).

Of all earthly relationships, your relationship with your mate is unique. The Bible calls it one flesh.

Why is sexual immorality of any type a heinous, hellish sin?

1. It’s a sin against yourself.

Every year adultery tears apart the lives of innocent children. Dr. R. Kent Hughes, the former pastor of Wheaton College Church, said: “The man who commits adultery tells his child, ‘Your mother is not worth much and your father is a liar and a cheat. Furthermore, honor is not nearly as important as pleasure. In fact, my child, my own satisfaction is more important than you are.’”

God established monogamous marriage to meet the deepest emotional, physical, psychological, and spiritual needs of parents and children. A child needs the context of a home. The glue holding the home together is sexual faithfulness.

If you’re a member of a church living an impure life, you’ve sinned against the rest of us, because we’re in this together. The entire 12th chapter of 1 Corinthians is devoted to the fact that we are all members together with one another.

You cannot say, “What I do is nobody else’s business.” Not in the covenant relationship of a church. What affects you affects me. When one member suffers, all suffer. Immorality is an infection in the body.

Israel was told to put this sin away from the nation itself (See Deuteronomy 22:22.) because immorality was an act of treason against the God who founded and formed them. “Righteousness exalts a nation, but sin is a reproach to any people” (Proverbs 14:34).

King Solomon was given some wise advice by his mother in Proverbs 31:3. “Do not give your strength to women, nor your ways to that which destroys kings.”

Immorality was the sin that ended Greece, Rome, Egypt, and Babylon. It will ruin America. If we don’t take a stand for what’s right and holy, you can kiss America goodbye. God will give up on this nation.

5. It’s a sin against Almighty God.

God said He will judge this.

“Whoever commits adultery with a woman lacks understanding; He who does so destroys his own soul” (Proverbs 6:32).

All of Proverbs chapter 7 speaks of the adulterous woman, ending with, “Her house is the way to hell, descending to the chambers of death.”

God says in 1 Corinthians 6:9-10, these people are not going to Heaven unless they change.

We can’t change the hearts and minds of others. Revival won’t come from the White House but from the church house, starting with God’s people. (See 1 Peter 4:17.) One by one, we must take our nation back.

Here’s what we can do:

If you’re burdened today because your life has been touched by immorality, I have good news: The Gospel of Jesus Christ is “the power of God to salvation for everyone who believes” (Romans 1:16). God offers forgiveness, grace, and another chance. “Though your sins are like scarlet, they shall be as white as snow…” (Isaiah 1:18).

The good news is: “If anyone is in Christ, he is a new creation; old things have passed away; behold, all things have become new” (2 Corinthians 5:17). When we confess, the cleansing tides of Calvary sweep across the human soul. Jesus’ blood washes every blot, every stain, whiter than snow.