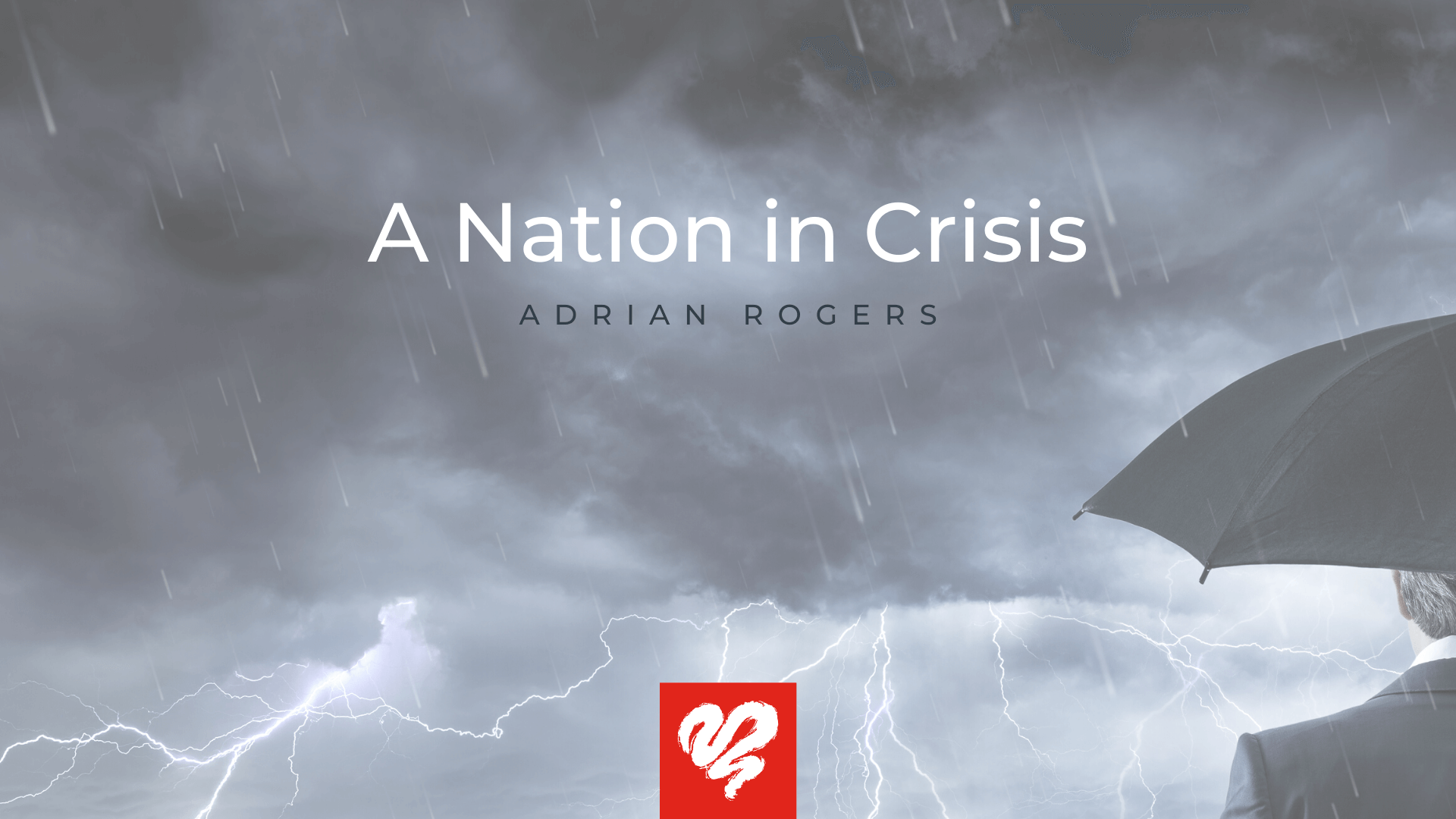 A Nation in Crisis

Our beloved nation is in crisis. One by one, lights of decency and hope are being extinguished. It seems Americans are content to have scoundrels in leadership. One day calamity will certainly come. We will face economic, political, or natural disasters over which we have no control. We’ll dial 9-1-1, but there’ll be no answer. The line will be dead. Then we’ll fill our churches and turn our eyes upward. You’ll pray, but your prayers won’t be answered.

"And you will cry out in that day because of your king whom you have chosen for yourselves, and the Lord will not hear you in that day" (1 Samuel 8:18).

Behold, the Lord’s hand is not shortened that it cannot save; nor His ear heavy that it cannot hear. But your iniquities have separated you from your God; and your sins have hidden His face from you, so that He will not hear. For your hands are defiled with blood and your fingers with iniquity. Your lips have spoken lies; your tongue has muttered perversity. No one calls for justice nor does any plead for truth. They trust in empty words and speak lies; they conceive evil and bring forth iniquity.

God is well able to hear our prayers, but He won’t hear, because our sin has created a barrier.

Our sins today are no different from those of Isaiah’s day.

God’s people had bloody hands. A modern holocaust has flooded America. The blood of sixty million pre-born babies cries out against us from the ground since the horrendous Roe v. Wade ruling, when nine black-robed men said a little pre-born baby can be treated like a piece of protoplasm.

In America, we kill babies at the rate of 4,000 each day. No wonder our iniquities have separated us so far from God. He’s hidden His face from us. We’re swimming in an ocean of innocent blood.

Violence today has surpassed the days of Noah. Someone wisely said, “We’re living in a day where 12-year-olds are having babies, 15-year-olds are killing each other, and 18-year-olds are graduating from high school with a diploma they can’t read.”

“Your lips have spoken lies; your tongue has muttered perverseness” (Isaiah 59:3). Just look at the nightly news. As far back as February 1987, U.S. News and World Report ran a cover story which said,

Isaiah 59:4 continues, "No one calls for justice, nor does any plead for truth. They trust in empty words and speak lies. They conceive evil and bring forth iniquity."

We’re trying to raise young people in a time of moral ambivalence and ethical fogginess among many of our leaders. Ecclesiastes 10:1 says that folly in those who are supposed to have wisdom and honor stinks like dead flies in an ointment. Even back in 1900, Theodore Roosevelt wrote that if leaders aren’t honest, they’re disqualified.

Isaiah 5:20 says, "Woe to those who call evil good and good evil; who put darkness for light and light for darkness; who put bitter for sweet and sweet for bitter!"

Isaiah’s people looked to God and cried, “Have mercy on us,” only to have God respond, “No, I won’t hear your prayer.”

What brought about their bloody hands, lying lips, and wicked hearts? Three things:

1. Feeding on a diet of deception.

"They hatch vipers’ eggs and weave the spider’s web. He who eats of their eggs dies and from that which is crushed, a viper breaks out" (Isaiah 59:5).

In both Isaiah’s day and ours, devilish lies and poisonous philosophies are swallowed by adults and youth alike.

Our nation is on a snake-egg diet, incubated in materialism and liberalism, spawned by Satan himself, the father of lies. Certain philosophies have become so ingrained, they’re poisoning our educational, religious, economic, and political outlook. Each morning in public schools our children are served a snake‑egg omelet, and they swallow it down.

Dramatic changes have taken place in America. In just the 20 years between 1962 and 1982, the Supreme Court ruled prayer in public schools, classroom Bible reading, and posting the Ten Commandments unconstitutional. They prohibited teaching biblical creation. God was expelled and told not to return. As kids bring guns to school, we cannot post “Thou shalt not kill” on the walls.

Now teen depression, runaways, and suicides are soaring. School tells them the universe is self-existing, not created, and they don’t have inalienable rights granted by God. Abortion, infanticide, and euthanasia become acceptable when you believe you’re not created in the image of God but evolved from some primordial ooze.

Schools can’t hand out an aspirin without parental permission but can dispense birth control and take a girl from school to have an abortion without parental knowledge or consent. The wisdom that built this great nation is mocked. Our kids are being served snake eggs every day.

Bibles are out; values clarification is in. Creation is out, evolution is in. The Ten Commandments are out, gang warfare and murder are in. Prayer is out, police are in. Abstinence is out; teen pregnancy, condoms, and abortion are in. Learning is out, social engineering is in.

2. Weaving a web of wickedness.

A spider’s web can be almost invisible. Young people can hardly see it. It entangles an unsuspecting insect and sucks it dry. Satan has many webs, and he’s sucking dry a generation through his terrifying web of evil.

In his multi-billion-dollar web of pornography, children can see unspeakable things on the internet and on television. On a phone, they can watch and listen to porn…even create it themselves. Many kids and adults alike are being caught in the web of pornography.

In his web of addictions, a generation of walking dead have been sucked dry, embalmed by alcohol and drugs.

In this web of immorality, young people are told there are no fixed standards of right and wrong. Hollywood creates the myth that extra-marital sex and homosexuality are on the same level as chastity, monogamy, and heterosexuality. Schools teach children to have sex without guilt, without catching an STD, and without conceiving a baby. One textbook says,

As with other patterns of sexual behavior, one should not pin “good” or “bad” on a practice. Morality is individual. It is what you think it is. Your conception of what is right or wrong morally is an individual decision.

May God have mercy on us when in schools we cannot pray, read God’s Word, or post the Ten Commandments, but we can denigrate God’s Word and His law. We’re in a terrible situation. What has brought about this crisis in America?

"Justice is turned back, and righteousness stands afar off; for truth is fallen in the street, and equity cannot enter" (Isaiah 59:14).

There’s a traffic jam in this verse—justice and righteousness are blocked. They can’t get through. Why has judgment been turned backward? Why does justice wait in the wings?

Because Truth is lying prostrate in our streets. You can’t murder truth. Truth will not die. But it’s tripped up by dishonest politicians, chloroformed by liberal preachers.

When you call for justice and truth, you become the “prey” to God’s enemies. I’ve experienced that.

May I say with all the emotion of my soul, America must put truth back on her feet. America could be put right quickly, dramatically, if a generation of preachers in pulpits across America would open the Book of Truth every week and preach, “Thus says the Lord God Almighty,” without fear or favor. Yet our situation today is a crisis.

Why did God write a Bible? To give us His Word of Truth. Why did He send the Holy Spirit? He is the Spirit of Truth. How does Jesus describe Himself? “I am the way, the truth, and the life” (John 14:6). The church is called the pillar and the ground of truth (1 Timothy 2:15). The Apostle John said, “I have no greater joy than to know that my children walk in truth” (3 John 1:4). Knowledge may double, but truth will never double. God’s truth is eternal.

Most of us try to eliminate evil and falsehood by going around stamping out snake eggs and sweeping down spider webs. But only God’s truth will slay the snake and destroy the spider’s web. We must put truth on her feet in America today.

I call upon every believer: rededicate your life to the truth. Parents, teach your children to live, love, know, tell, and believe the truth. Jesus said, “Sanctify them by Your Truth. Your Word is truth” (John 17:17). “Buy the truth and do not sell it.” (Proverbs 23:23). There is a prize to possess—the truth. There’s a price to pay—you must buy the truth.

You must study it, pour over it, learn it, live it, know it, and preserve it. Don’t let anyone take the truth in God’s Word from you. The early Christians didn’t argue over the Bible. They loved it, believed it, taught it, poured it forth as white‑hot lava. Now, one by one, person by person, family by family, city by city, church by church, we’ve got to take America back. My heart is broken over snake eggs, spider webs, and traffic jams.

What about you? Are you right with God? What about your home? Your business relationships? Are you trapped in a spider’s web? Only one thing will set you free. John 8:21, “You shall know the truth, and the truth shall make you free.”

How to Pray for America

Do Christians Need to Stay Out of Politics?

It’s Time to Pray for America

Pro-Choice Is No Choice Booklet