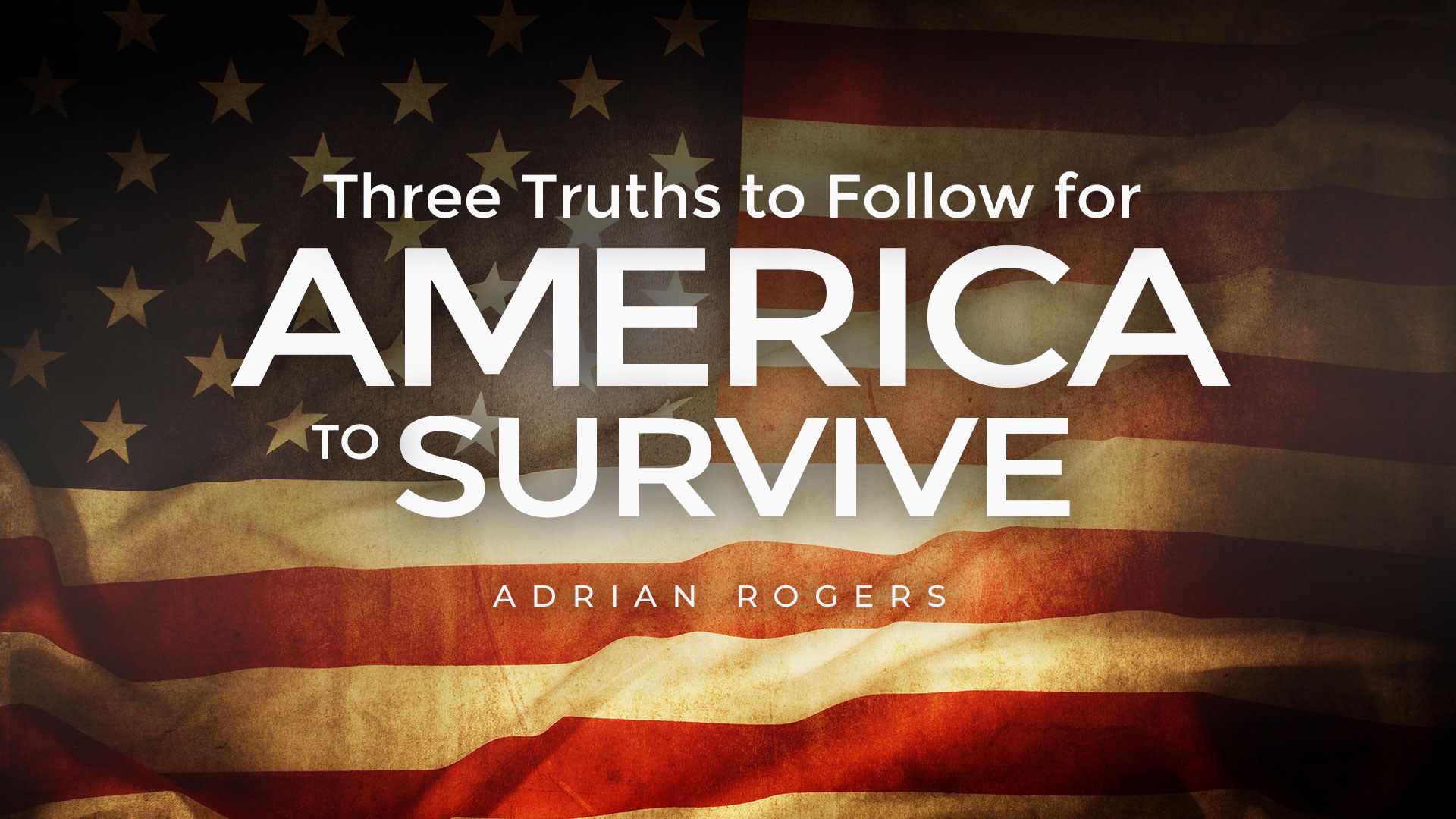 
This article is based on Pastor Adrian Rogers' message, The Generation to Come and the America of Tomorrow.

I’m concerned—not just about America today, but the America of tomorrow and the generation to come. Our generation has seen, for example, the collapse of Soviet Communism and our recovery from the 9-11 terrorist attacks, but do you feel more secure today than you did after these victories? Frankly, I don’t, because after we got rid of each of these demons, seven more deadly demons have come to America. We are in great danger. How much longer we will survive as a nation? For many years America has been economically #1 in the world, but that could change on a dime. What will America be like ten, fifteen, twenty years from now if Jesus hasn’t returned by then? I’d rather leave our children a legacy of great, godly principles than great wealth, squandered in a godless society.

Psalm 78 expresses that same cry for the generation of tomorrow: We know our history—all God has done for us. We’ll tell our children so “the generation to come might know them, the children who would be born, that they may arise and declare them to their children” (Psalm 78:6-7).

The American dream was placed into the hearts of our Founding Fathers by Almighty God. America did not just happen. America was the gift of Almighty God. But that dream could become a nightmare. What legacy are we going to leave?

America today strikingly parallels Old Testament Israel. The psalmist remembers how God had blessed Israel, delivered them from oppression, and given them a new beginning in Canaan with a law, a land, and a Lord. But what did they do? Disobeyed the law, defiled the land, and denied the Lord that brought them there.

I want to give you three thoughts straight from the Word of God. Psalm 78 gives a reality check—three ancient truths we must follow if we’re to survive.

Satan wants to separate us from our heritage. But God’s assignment is to look back, see what God has done, and teach our children their history.

“We will not hide them from their children, telling to the generation to come the praises of the Lord, and His strength and His wonderful works that He has done" (Psalm 78:4).

If we fail, we’re one generation away from paganism. Just one. If we miss a generation, we’re gone. Our children’s teachers, friends, TV, the media, will teach them, and it won’t be what God says. Revisionists are busy erasing America’s history or rewriting it, teaching Hollywood’s values. God is ridiculed, mocked, and called out of bounds for this generation. A professor in Educational Psychiatry at Harvard University wrote,

Every child in America entering school at the age of five is mentally ill because he comes to school with certain allegiances toward our Founding Fathers, our elected officials, his parents, toward a belief in a supernatural being, toward the sovereignty of his nation as a separate entity. It is up to you teachers to make all these sick children well by creating the international child of the future.

Another one wrote that teachers’ role should be preachers of a new faith:

The classroom must and will become an arena of conflict between the old and the new, the rotting corpse of Christianity and the faith of humanism.

What about the generation to come? What about their children? Knowing your spiritual roots is vital. Fathers, God holds you responsible to teach your children our history, passing down the legacy from father to child to grandchild, in a spiritual chain reaction. (See Psalm 78:5.)

Our Declaration of Independence declared our independence from earthly, tyrannical powers to dependence upon Almighty God, beginning, “We hold these truths to be self-evident, that all men are endowed by their Creator….” But the ACLU and others say you can’t teach creationism in public schools today. The Declaration ends, “With a firm reliance on the protection of divine providence,” another way of saying “dependence upon God.”

James Madison, the architect of our Constitution said, "We have staked the future upon the capacity of each and all of us to govern ourselves, to sustain ourselves according to the Ten Commandments of God."

Today you can’t even post the Ten Commandments on classroom walls.

On July 4, 1821, John Quincy Adams said, "The highest glory of this American Revolution was this: it connected in one indissoluble bond the principles of civil government with the principle of Christianity."

President Andrew Jackson wrote, “The Bible is the Rock upon which our republic rests.”

Early Americans knew this. They never thought of saying, “We don’t want God in our government or education.” But revisionists don’t want you to hear that. Our children are not being taught that in public schools.

Our national hymn, “My Country, ‘Tis of Thee,” ends with

Long may our land be bright with freedom’s holy light; protect us by Thy might, Great God, our King!

Never say America doesn’t have a king. We have a president we can vote in and out, but we have a King we can’t vote in or out. We can deny Him and turn our back on Him if we are foolish enough to do this.

How many of our children today know the things I’ve just quoted? We must study the history of our nation. Fathers, according to Psalm 78, you are to teach these things to your children.

Every family should write down its own spiritual history. Get the members of your family to write their testimony and put them in a book so your children can look back and see what God has done for your family. What a blessing to teach them that.

Each child should know his or her own individual history. When your child comes to accept Christ, help them write it down. Rejoice over it. Each year let them have not only a natural birthday but celebrate their supernatural birthday. “Honey, this was the day you got saved. Let’s thank God.” Let them remember they have a history.

How easy it is to forget the blessings of Almighty God. We break God’s heart by forgetting Him. We have spiritual amnesia. America is suffering from three memory killers:

The lust of the flesh
"But they sinned even more against Him by rebelling against the Most High in the wilderness" (Psalm 78:17).

Rather than thanking God for His blessings, America is provoking God by breaking His law. There’s an erosion of spiritual virtues and values. Sexual permissiveness, the blatant parading of perversion, continual and casual abortion, breakup of the family, obsession with self, pleasure, drugs and sex—America is reveling in excesses, reeling in drunkenness, rotting in sin.

The lure of the world
"Yes, again and again they tempted God, and limited the Holy One of Israel"  (Psalm 78:41).

Israel said, “God, this is Your limit.” We’ve done the same thing. In our schools, the Ten Commandments are out, sex ed is in. Chastity is out; birth control is in. Prayer is out; metal detectors and policemen are in.

The lies of the devil
"They did not remember His power: the day when He redeemed them from the enemy." (Psalm 78:42)

They forgot the one true God who founded their nation. Now they’re worshiping false gods. In his book The Gnostic Empire Strikes Back, Peter Jones asks,

Why is homosexuality on the rise? Why is it endorsed by Time magazine, promoted on publicly funded radio, and featured in children’s comic strips with great moral fervor? Why is witchcraft taught in certain California school districts? Why is abortion a vitally important part of the Feminist Manifesto? Why is political correctness so important on many college campuses?

The real question is, are these apparent disconnected issues really part of a coherent, pagan ideology, poised to impose its religious belief system on the New World Order in the 21st Century?

My heart breaks that the Supreme Court says it’s legal for a doctor to take a little baby, almost completely born, crush its skull, and bring out a corpse. I’m convinced that what goes under the guise of abortion today is a blood sacrifice to the demon gods of lust and sex. It is a blood sacrifice to demon gods, children offered to the god Molech. This is the sin Israel committed that angered God more than any other. We must repent of this or face, as Israel did, God’s wrath.

Because of this, God became so angry, He gave His support to Israel’s enemies! Is God giving His support to our enemies? America may become a molded crust in history’s garbage can. Not only is God our only hope, but God is also our biggest threat. The nation born in 1776 must be born again or we will join the graveyard of nations.

I’m only one man, but I want to do the best I can with what I have, with every chance I get, to proclaim this. If we do that, we can change this nation. If enough Christians in America will wake up, if they will review their history, if they will renew their memory, they can reclaim their legacy.

Lord, we pray that the exhortations in Your Word will bring our repentance and obedience so that You would come and bless America one more time. O God, we’re looking to You. In the strong name of Jesus, we pray, amen.

Friend, America won’t save you. America won’t get you to Heaven. It would be terrible for you to live in a God-blessed land, then die and go to hell. You need Jesus Christ. You need to be saved. If we need God in America, how much more do you need God in your heart?

Did you pray that prayer? If you did, we want to celebrate with you and give you some resources to help you begin your walk with Christ. Let us know by clicking here.