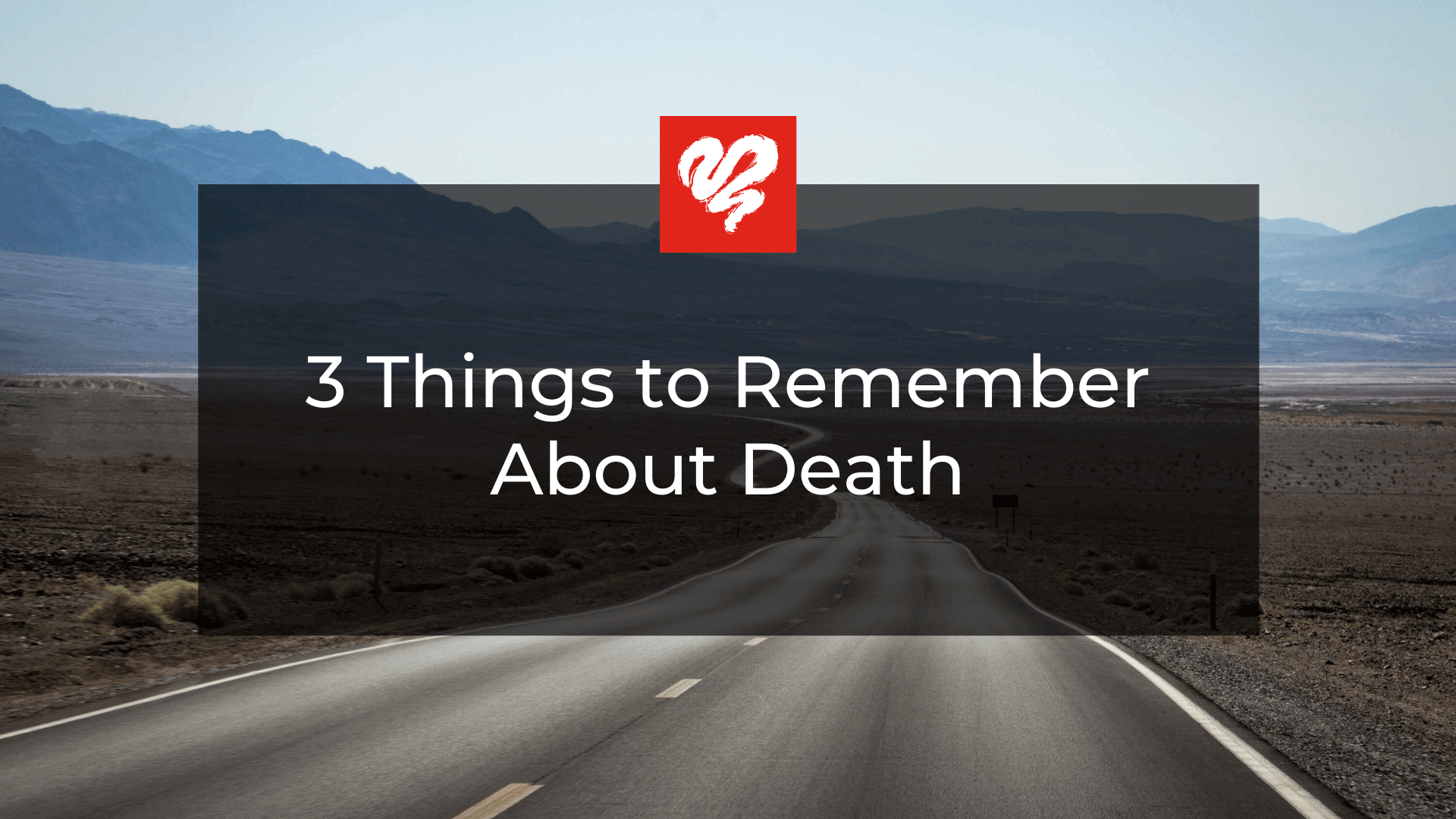 3 Things to Remember About Death


This article is based on Pastor Adrian Rogers' message, God's Presence in the Hour of Death.

Man is the only creature who knows he’s going to die, and he’s trying desperately to forget it. The fear of death keeps people in bondage, gripped by fear. But Jesus came to destroy the works of the devil, “and release those who through fear of death were all their lifetime subject to bondage (Hebrews 2:14). Jesus came to deliver you from that fear. You’re not ready to live until you’re no longer afraid to die.

A child of God can smile at death. We’ve learned in our current series “Practicing the Presence of God” what a great man Joseph was. He lived to be 110 and enjoy his great-grandchildren, but like everyone, came to the day when he died (Genesis 50:22-23). But before he did, he said to his brothers, "God will surely visit you, and bring you out of this land to the land of which He swore to Abraham, to Isaac, and to Jacob” [that is, God will take you out of Egypt and bring you into Canaan] ….and you shall carry up my bones from here. (Genesis 50: 24-25)

Was this little statement important? It was. When the New Testament comments on his life, that one statement put him in Hebrews chapter 11, the “Faith Hall of Fame.”

Would you like to have the assurance Joseph had? Three thoughts to remember:

You’ll not have any peace in death unless you have His promises to stand on. Get the promises of God down in your heart before death comes. Joseph could face death by faith. He could say by faith, “Take my bones with you,” because Joseph had the Word of God written upon his heart.

What had God said? More than 300 years before Joseph, God made a promise to Abraham (then Abram) about His people, and Joseph knew it: “I’m going to make a great nation of you, but your descendants are going down to a land that’s not theirs. After 400 years, they’re coming out, and when they come out, they’re going to be very wealthy” (Genesis 15: 13-14).

Joseph could say “Take me with you” because his faith was rooted in an unshakeable, unbreakable promise of God.

Do you want to smile at death? To practice the presence of God at the time of death? You cannot do it without faith.

Faith isn’t naming it and claiming it. You can’t claim it until God names it. Faith isn’t positive thinking. Faith isn’t following a hunch. Faith isn’t hoping for the best. Faith isn’t a feeling of optimism. Faith isn’t self-confidence or wishing on a star. Hebrews 11:1 tells us what faith is: “Now faith is the substance of things hoped for, the evidence of things not seen.” Hope in the Bible means rock-ribbed assurance. Faith is getting a word from God and believing it.

The Second Coming of Jesus is called “the blessed hope.” That word hope doesn’t mean maybe or perhaps. Faith is the substance of absolute assurance based on the Word of God. God made a promise to Abram. God cannot lie. If one promise in His Word fails, He would lose His character. Faith is standing on His promises. Joseph had so much faith because he had soaked his soul in the unbreakable promises of the Word of God.

The great Dwight L. Moody once said, “I wanted faith, I prayed and prayed for faith, but my faith didn’t grow. Then I read, “Faith comes by hearing, and hearing by the Word of God” (Romans 10:17). I stopped asking for faith, got in the Bible, saturated my soul with the Word of God, and my faith began to grow and grow.”

If you want to be able to smile at death, remember the unbreakable promises of God.

God’s promises without His power mean nothing. How could Joseph be so sure “God will surely bring you out”? Because He is all-powerful Almighty God.

When Joseph quoted this promise, from all appearances there was no reason to think of ever leaving Egypt. He was the prime minister. They had it good there, in a place of privileged position.

Don’t ever say, “We’d better re-examine the Word of God in the light of present-day circumstances.” God’s Word is unshaken in the face of human reasoning.

Emotions don’t matter when it comes to God’s Word. Feelings come and feelings go—they’re deceiving. The Bible is the Word of God; no contradiction is worth believing.

Martin Luther wrote about an encounter he had with Satan. He said to Luther, “Do you feel your sins are forgiven?” Luther said, “It doesn’t matter how I feel, it’s what God says.”

Joseph stood on a promise that was already 200 years old. It would be another 200 years before the children of Israel would return to Canaan. Faith can wait.

For the vision is yet for an appointed time, but at the end, it will speak, and it will not lie. Though it tarries, wait for it, because it will surely come. It will not tarry....” (Habakkuk 2:3).

I believe Jesus Christ is coming back to earth bodily, visibly, literally. Many people missed His first coming because they disbelieved the Scripture. His Second Coming is going to be just that real. Delay means nothing.

Once they arrived, he was buried near his great-grandfather Abraham in Shechem (Joshua 24:32). Joseph had faith to believe if God promises, it will happen.

Why was it so important for Joseph to say at the end of his life, “When you return home, take my bones with you”? Because Joseph wanted to be a part of what God was doing. All his success in Egypt meant nothing. He wanted to leave a monument of faith. I believe he knew God wasn’t finished.

A great resurrection lies ahead for Joseph and for every person who dies in Christ (Daniel 12:2-3, John 5:28-29). One day the trumpet will sound, and the dead in Christ will rise first (1 Thessalonians 4:16).

If you know the unbreakable promises and unshakeable power of God, you will experience His undeniable peace when you come to die.

Joe Henry Hankins, a preacher in Texas, shared Christ with the wife of a successful businessman and she was saved. Hankins decided to visit the businessman.

Hankins said, “Your wife has been saved. She’s going to be baptized Sunday night. I’d like to baptize the two of you together. I want you to give your heart to Christ.” The businessman agreed and promised he would—but not right then. “I’ll call you tomorrow.”

Hankins turned to leave, but something stopped him. He turned back with a sense of urgency. But again the man, whose name was Pat, promised to call tomorrow.

Once more Hankins started to leave, but the urgency increased. Something wasn’t right. He opened his New Testament and read to Pat, “Behold, now is the accepted time, behold, now is the day of salvation” (2 Corinthians 6:2).

Pat said, “You’re right. The devil has never done anything but lie to me. This is what God says. I’m doing it now.” They went to their knees. Pat gave his heart to Christ. Hankins left.

The next day, he received a call from Pat’s sister-in-law. Pat had had a heart attack. Before Hankins could leave for the hospital, the phone rang again. “You don’t need to come right away. He’s gone. But Pat said to be sure to tell you he was so glad you encouraged him to give his heart to Jesus last night.”

Friend, the Bible says, “Do not boast about tomorrow, for you do not know what a day may bring forth” (Proverbs 27:1).

Every casket you see, every funeral you attend, reminds you today is the day of salvation. Give your heart to Jesus, and you can smile at death.