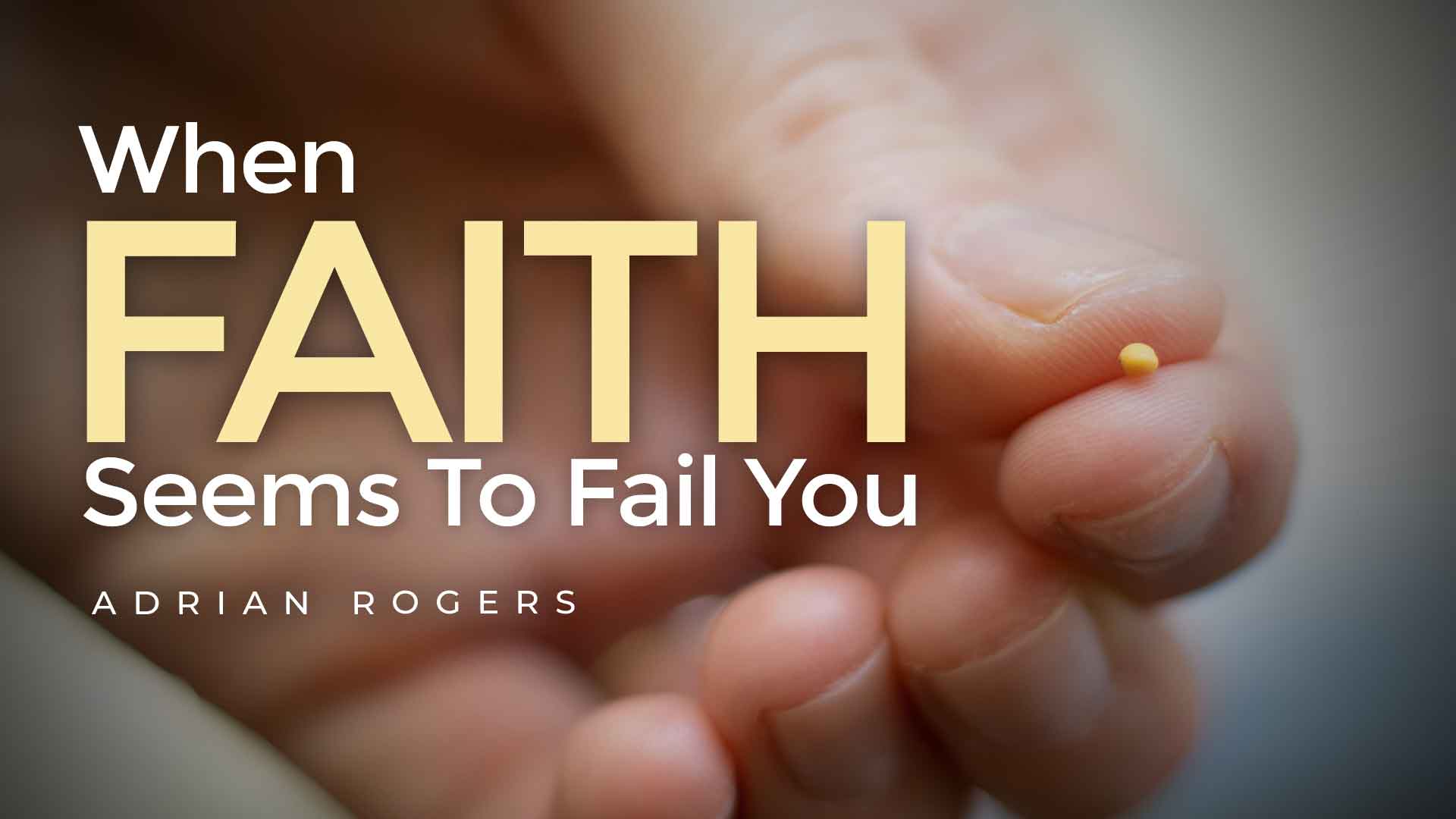 When Faith Seems to Fail You


This article is based on Pastor Adrian Rogers' message, When Faith Seems to Fail.

You cannot live the Christian life apart from faith. The Bible says this clearly.

“But without faith it is impossible to please [God]” (Hebrews 11:6a; word in brackets added).

But sometimes we pray for something and get the opposite. Sometimes temptations, heartaches, and fears come, and faith doesn’t remove them. Have you ever been there? You may be there soon. This is why Hebrews 11 was written.

Look at some victories of faith:

“And what more shall I say? For the time would fail me to tell of Gideon and Barak and Samson and Jephthah, also of David and Samuel and the prophets: who through faith subdued kingdoms, worked righteousness, obtained promises, stopped the mouths of lions, quenched the violence of fire, escaped the edge of the sword, out of weakness were made strong, became valiant in battle, turned to flight the armies of the aliens. Women received their dead raised to life again” (Hebrews 11:32-35a).

If it ended there, we’d say, “Sign me up!” But there is another word coming: “Others…”

“Others were tortured, not accepting deliverance, that they might obtain a better resurrection. Still others had trial of mockings and scourgings, yes, and of chains and imprisonment. They were stoned, they were sawn in two, were tempted, were slain with the sword. They wandered about in sheepskins and goatskins, being destitute, afflicted, tormented—of whom the world was not worthy. They wandered in deserts and mountains, in dens and caves of the earth” (Hebrews 11:35b-38).

Yet verse 39 says these others “obtained a good testimony through faith.” Some escape by faith, and some endure by faith. (See Hebrews 10:36.)

Some people are fine…until the crisis comes. Then they do not endure; they quit. They have an immature, superficial, sometimes superstitious faith. But here are three principles that will help you have mature faith.

If God doesn’t do it, it is not because He cannot. All of the deliverances in Hebrews 11:32-35 are supernatural. We all love those stories from childhood! Daniel in the lions’ den. Shadrach, Meshach, and Abednego in the fire. David slaying Goliath.

If you have walked with Jesus for long, you have a story like that—where God inexplicably worked in your heart and life. God can do anything—except fail! That is mature faith.

We love exciting victories, but sometimes they don’t seem to come.

Hebrews 11:37 says that some were stoned—like Zechariah the prophet. Stephen was stoned, too—and He was full of the Holy Spirit! (See Acts 6:5.) Some were “sawn in two.” Likely, that refers to Isaiah the prophet. He was put in a hollow tree, according to the decree of the king, and then the hollow tree was sawn down.

Early Christians were sometimes dressed in animal skins and turned loose in the woods so the dogs could bay after them in the hunt. They were fed to lions, sewn up in bags with poisonous serpents, or tied to beaches at low tide to drown slowly when the tide came in.

“Who shall separate us from the love of Christ? Shall tribulation, or distress, or persecution, or famine, or nakedness, or peril, or sword? As it is written: ‘For Your sake we are killed all day long; we are accounted as sheep for the slaughter.’ Yet in all these things we are more than conquerors through Him who loved us” (Romans 8:35-37).

The king of Babylon said to Shadrach, Meshach, and Abednego, “Bow down to this image, or be cast into the fiery furnace.”

Shadrach, Meshach, and Abed-Nego answered and said to the king, “O Nebuchadnezzar, we have no need to answer you in this matter. If that is the case, our God whom we serve is able to deliver us from the burning fiery furnace, and He will deliver us from your hand, O king. But if not, let it be known to you, O king, that we do not serve your gods, nor will we worship the gold image which you have set up” (Daniel 3:16-18; emphasis added).

They had settled faith. Their minds were already made up. They had sure faith: “Our God is able.” But they also had steadfast faith—“Even if He does not save us, we’re still not going to worship your idol.”

Are you ready to quit just because God hasn’t done what you asked of Him? You had better have an “if not” clause in your faith. “God, I know you are able. But I will serve You anyway. I won’t make bargains with You.” This does not mean your faith is weak. It means it is stronger than ever.

“Though the fig tree may not blossom, nor fruit be on the vines; though the labor of the olive may fail, and the fields yield no food; though the flock may be cut off from the fold, and there be no herd in the stalls—yet I will rejoice in the LORD, I will joy in the God of my salvation” (Habakkuk 3:17-18).

3. Base Your Faith on God’s Promises

“For all the promises of God in [Christ] are Yes, and in Him Amen, to the glory of God through us” (2 Corinthians 1:20; word in brackets added).

“And all these, having obtained a good testimony through faith, did not receive the promise, God having provided something better for us, that they should not be made perfect apart from us” (Hebrews 11:39-40).

In plain English, God has a wonderful plan, and it includes not only the Old Testament saints and early Christians but all of us. One of these days, God will fulfill His promises to them and to us. These people had faith, even if they did not have the answer in hand. They had it in their hearts—based on the steadfast promises of God. They had their eyes on the future.

Sometimes we expect too much of life and not enough of God. You must rest on the eternal promises of God. He has not forgotten His promises. When faith seems to fail, it may be that you are asking of your faith something God never intended for it.

Mature faith believes in God’s power, bows to God’s sovereign purposes, and is based on God’s promises. And one of the greatest promises is this: “Believe on the Lord Jesus Christ, and you will be saved, you and your household” (Acts 16:31).